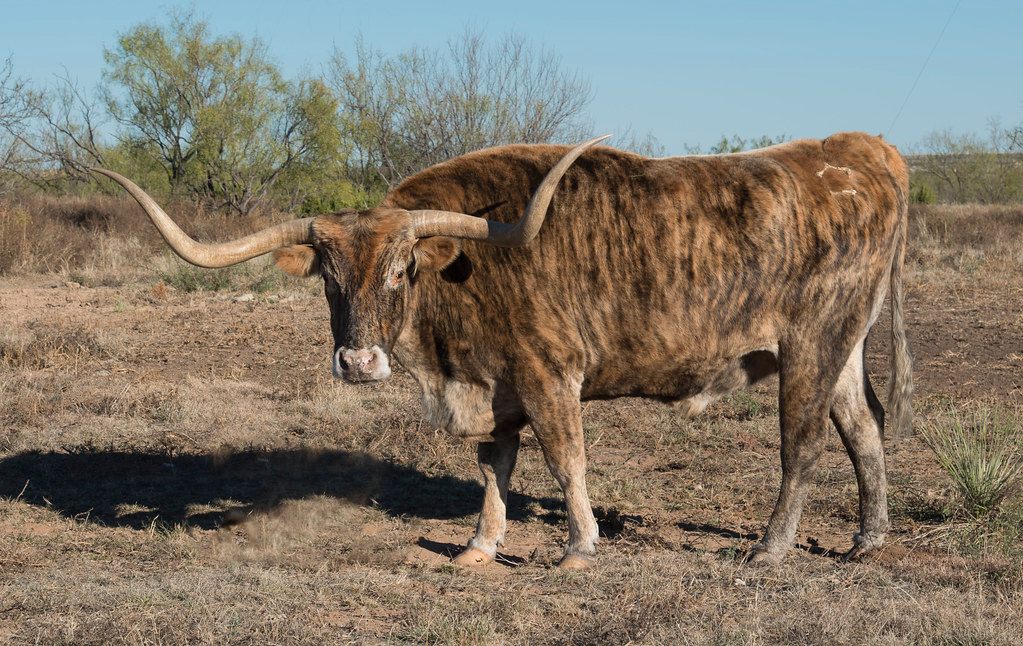 Is there anything more classically Texan than the longhorn? This special breed has become a symbol of the state where, as the saying goes, everything is bigger—including these cattle’s long, twisty horns.

“The majestic Texas Longhorn is an icon of Texas and Southwest culture—it represents our history in ranching, the American cowboy, and the pioneer,” says Andrea Wilson, Chairman of the Board of Directors of The Longhorn Project at NASA’s Johnson Space Center. “The symbol of the longhorn represents a sense of the adventure, power, strength, determination, solidarity, and independence often associated with the frontier spirit. When people see the longhorn, they think of Texas.”

The longhorn’s Texas legacy hasn’t always been a sure thing, however. These stunning beasts almost went extinct in the early 1900s, and it came down to six families and the Federal government to save them. One of those families, the Butlers from League City, TX, have had one of the largest impacts on longhorn cattle in the breed’s long history.

It all started back in 1855, when George Washington Butler brought his family by ox train from Louisiana to live in the grassy lowlands between Houston and Galveston, near Clear Lake in the Bay Area of Houston. In 1872, he bought 30 acres of land near the railroad tracks, and let his cattle roam free; at one point, he had 25,000 of them on his land.

At the time, cattle from various ranches were free range, and owners identified their cattle by their brand. GW Butler’s OT brand was given to him by his mother—it bore her initials—and earned him the nickname around town of Mr. Otee.

Aside from his cattle, GW left an important legacy on the local community. He was League City’s postmaster for several years, and served as Galveston County commissioner for six. He also built League City’s first school—a log cabin—on his property. Perhaps one of his biggest claims to fame is that in 1907 he organized a planting of live oak trees—a reminder of his native Louisiana—along many of the streets in League City, and they still stand magnificently around town today.

Milby Butler was born to GW and Mary (Baker) Butler in 1889. He was the only one out of their six children who took to ranching. Eventually, his father passed the OT brand onto his son, who took over the ranch around 1908.

Milby lived the part of the typical Texan longhorn rancher-slash-cowboy: He spent hours in the fields, was known for his shooting skills, and was a master breeder. And there’s a good reason that he evokes that image: He helped to create it. Milby inspired the prototypical American cowboy as portrayed by John Wayne. In 1960, Wayne was playing Davy Crockett in the 1960 film The Alamo. Milby supplied a herd of cattle for the set, and spent some time with the star; legend has it that Wayne once called Milby “my best character study for the Texas man.”

In Texas, where cowboys are more common and cattle is big business, Milby’s real claim to fame was his superior breed of longhorns, to which he devoted his life’s work.

In the 1930s, Milby noticed that the pure Texas longhorns were a dying breed. At that time, Native East Texas long-horned cattle were often crossbred with Brahman cattle and fatter English breeds. In an effort to preserve the breed, he began separating the Texas Longhorns from the rest of his cattle. In 1931, Milby traded two Brahman cows for an East Texas white and red speckled Longhorn cow whose horns had a double-twist corkscrew shape. She became the ideal Butler longhorn, and he began breeding her extensively. The red and white color pattern was often referred to as “Butler color.”

Everyone knew that Milby was obsessed with horns—the longer the better. He would carefully select his cows and match them with the bull that he thought would produce a cow or bull with long, corkscrew-shaped horns. Soon, exquisite longhorn Butler cattle could be seen roaming his property.

Unlike his father, Milby almost never sold his longhorns. He believed they were like silver dollars, that they were on the way out and needed to be preserved.

When Milby died in 1971, just shy of his 83rd birthday, most of his herd was sadly slaughtered. But some of his best longhorns were saved by other ranchers who have since managed to continue the Butler line, even though it’s been inevitably muddled. Now, most of the longhorn cattle in Texas can trace at least some of their roots to the Butler bloodline.Today, the best place in Bay Area Houston to see Texas longhorns is at NASA’s Johnson Space Center in Nassau Bay. Yes—the same place you’ll go to learn about space exploration. The space center is the home of the Longhorn Project, and the majestic longhorns can be seen grazing right across from an impressive Saturn V rocket. The sight is visible from the space center’s tram tour, or you can arrange a private tour by contacting the Longhorn Project.

But how did longhorns end up in front of a rocket ship? A 1960 photo of grazing cattle on the land the space center now occupies can take credit for that. It intrigued former Johnson Space Center director George W.S. Abbey; after researching the longhorn legacy in the area, he launched the Longhorn Project in 1997 together with Clear Creek Independent School District, the Houston Livestock Show and Rodeo, and the Texas Longhorn Breeders Association of America.

“If you combine the rancher’s industriousness with the scientist’s curiosity and the engineer’s problem-solving skills, you can begin to appreciate the Longhorn Project,” says Wilson. In this program that teaches local students about both agriculture and science, “America’s manned space future meets the best of Texas’ Western heritage.”

The Longhorn Project is a nonprofit that works with the local school district on a participatory agricultural education center where students learn about and take care of the resident livestock and help preserve the Texas longhorn. Agriculture, aquaculture, composting, and Western heritage are also part of the curriculum, and students learn how these topics relate back to human ingenuity and spaceflight.

Aside from ogling longhorns at the Johnson Space Center, visitors to Bay Area Houston—which includes League City, Seabrook, Kemah, Clear Lake Shores, and Nassau Bay—can stop by the Butler Building, which was built in 1909 by the Butler family. It was the location of the first bank in League City and also housed the post office at one point. In later years it was a cafe, hardware store, and drug store; now, it’s a wedding venue called Butler’s Courtyard.

If you want more longhorn lore, you can start by visiting the League City Historical Society to see their exhibit devoted to the Butler family, along with the other farmers and ranchers that helped found League City. Next, walk through League Park, where you’ll find a mini mural from 2021, painted on a utility box and depicting some of the longhorn and Butler history. Head to Schroeder’s Book Haven to browse the vast Texana section of vintage books and search for any longhorn texts. While George, Milby, and even John Wayne are all long gone, the impressive Butler legacy lives on in the remaining longhorn cattle in the Bay Area of Houston and beyond.

This facility is home to a lifesize replica of the original shuttle Independence—the only one of its kind in the world that’s mounted to an aircraft carrier.
Sponsored by Visit Bay Area Houston
Video