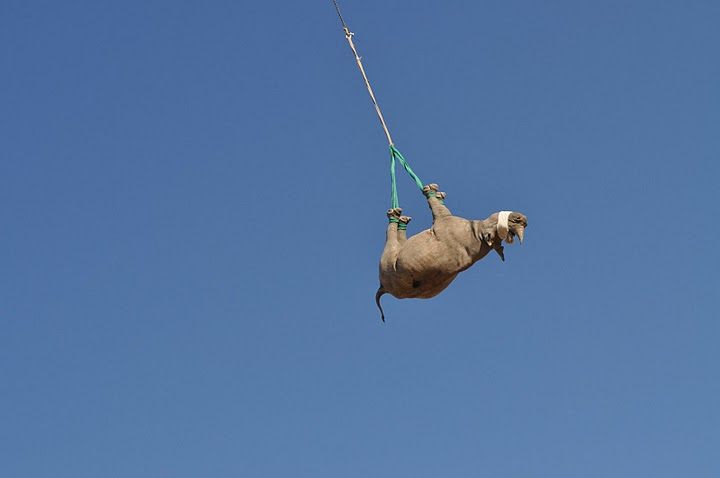 Researchers found that transporting the animal upside down was easier on the creature than moving it on its side. Cornell School of Veterinary Medicine
In This Story
Destination Guide

There are lots of reasons to move a rhinoceros. In Namibia, where one-third of the world’s 5,500 black rhinos live, conservationists must strategically relocate the animals to sustain local populations and encourage genetic diversity. Sometimes rhinos are moved to national parks, where they can be protected from poachers who relentlessly pursue their valuable horns. Others are transported to one of the country’s 86 conservancies, community-managed preserves that can lure more visitors—and generate more poverty-alleviating revenue—with the promise of a rhino spotting.

But moving a rhino is a big lift, and not just because of its size. Namibia is a rugged country of extreme landscapes, from savannah to salt flats to sand dunes. Many places where wild animals roam freely are inaccessible to vehicles. When transport trucks are a feasible option, it can be tricky to cajole a 3,000-pound rhino into one; even if the animal is persuaded to board, an hours-long ride may be traumatic. For these reasons, in the last decade, helicopters have become a reliable way to move rhinos from place to place—the animal sedated and dangling, upside down, below—even though little was known about the clinical risks involved.

“We’ve been picking animals up by their feet for 20 years now,” says Pete Morkel, a wildlife veterinarian who is considered the world’s foremost expert in black rhinos. The options were either moving the animal by the feet or flat on its side—and placing straps around the feet was much easier than hoisting a sometimes-enormous animal onto a stretcher for transport. The animals sport a blindfold and earplugs to help limit stimuli. “We started small, with zebra and antelope, and then moved on to the big stuff,” Morkel says. “There was a lot of trial and error—and luckily, we haven’t had much error.”

Not content to rely on luck, Namibian conservationists wanted to find out what effect an upside-down ride, coupled with a powerful cocktail of sedatives, might have on a two-ton mammal. In 2015, a team from the Cornell Conservation Medicine Program traveled to Waterburg National Park to collaborate with the country’s Ministry of Environment and Tourism (MET) and put the question to rest. Their findings were released in January, delayed by canceled field seasons and the pandemic.

“There’s a risk any time you move a rhino,” says Robin Radcliffe, director of Cornell’s program and a board-certified specialist in zoological medicine. “And we know that when anesthesia’s involved, positioning is very important—whether you’re a dog, a person, or a rhino.” Radcliffe and his team hypothesized that inversion would compress the animal’s chest and lungs, exacerbating the effects of the drugs. They guessed that transporting the animal on its side, though it required difficult maneuvering for the relocation crew, would prove far easier on the rhino.

To see if they were right, the team worked with 12 rhinos that had been captured and sedated for conservation-related procedures but were not being moved. In random order, each rhino was laid flat on its side for 10 minutes and suspended from a crane for 10 minutes, while the veterinarians collected data on the animals’ cardiovascular and respiratory functions in each position. What they found surprised them.

“The physiological effects were about the same,” Radcliffe explains. In both positions, the animals developed hypoxia, a lack of oxygen reaching the tissues. “But oxygen levels were higher, measures of ventilation were higher, when the animal was upside down.”

Radcliffe and his colleagues suspect that the rhinos’ size and stature might be behind this phenomenon. Unlike a smaller, softer mammal, a rhino’s rigid body can maintain integrity even upside down. “It’s got this whole mass of head and neck hanging down, possibly straightening out the airway,” he says.

For conservation teams in Namibia, the study provided additional peace of mind that they were doing right by their precious cargo. “It was like lifting the hood of the car to understand how the engine works,” says Morkel. “It was a great cross-check on what we’re doing.”

Dr. Mark Jago, rhino capture veterinarian for the MET at the time of the study and now a professor at the University of Namibia, hopes that restoration efforts will eventually mean transporting more rhinos back into their former range, a feat that will require more ambitious journeys, as current conservation projects tend to be located close to the infrastructure of national parks and conservancies. “The terrains and distances … we need to travel will become ever more challenging,” he predicts. “To be able to safely and successfully transport rhinos inverted under a helicopter will be a valuable tool in the ‘translocation toolbox.’”

Conservationists need all the tools they can get to steady the course for the black rhino, which experienced a staggering 98 percent decline in the second half of the last century. In the past two decades, the species has rebounded slightly, but it remains critically endangered.

According to Jago, “Namibia is trying hard—very hard—to be a stronghold, but it is an expensive business and support is always welcome.” He says awareness, funding, and tourism all play an integral part in the country’s ongoing work to help black rhinos soar.

The Rise and Fall of Britain's Biggest Pram Collection

Invasive predators and other threats have pushed the Key Largo woodrat to the brink. A small but passionate group of scientists and volunteers is pushing back.
Video • Object of Intrigue