How We Got Our Wings - Atlas Obscura
Want to see fewer ads? Become a Member. 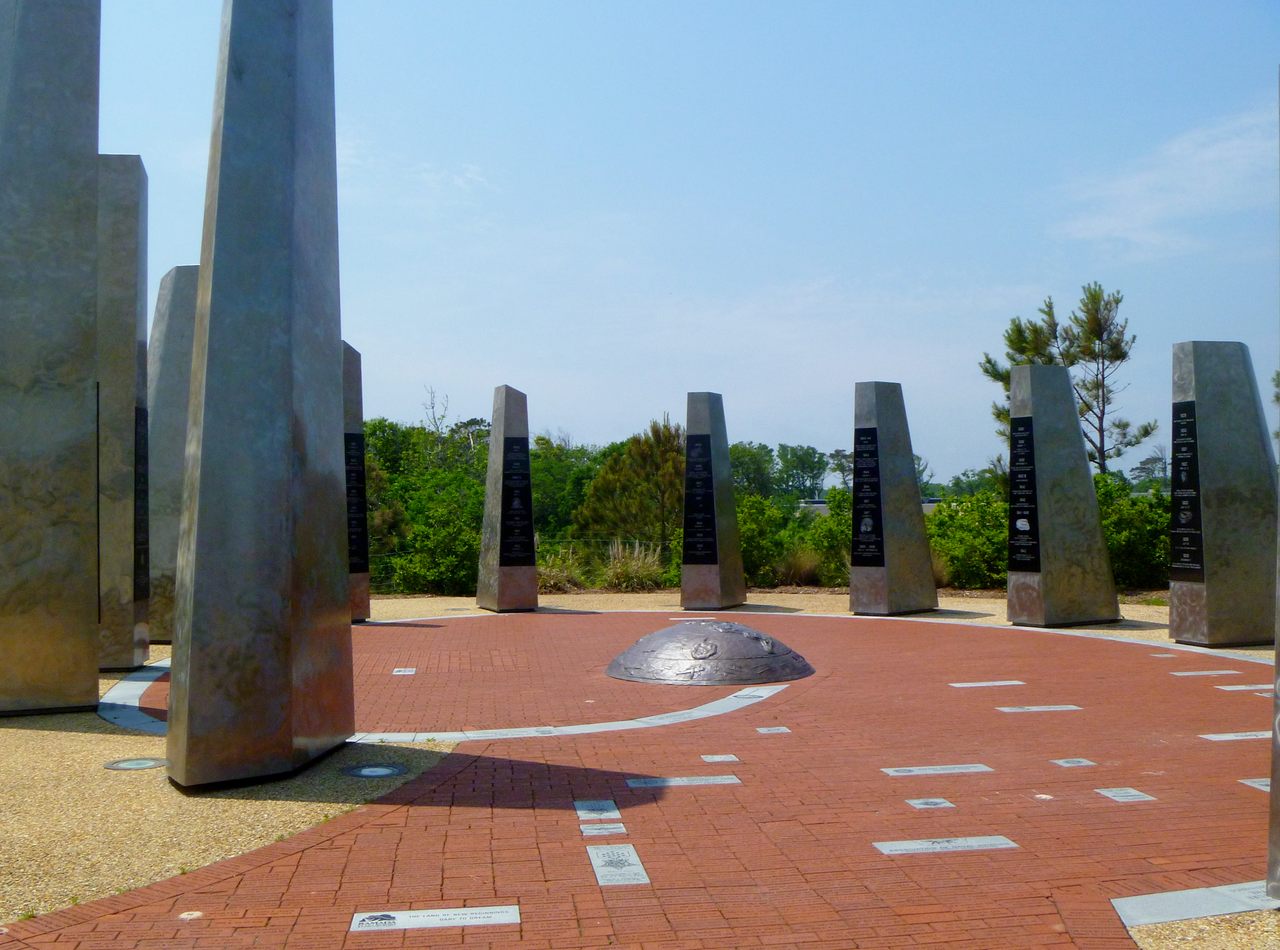 For travelers, there’s nothing like the feeling of taking off in an airplane, speeding through the heavens on the way to discover a new destination. That privilege of modern air travel is hard won, its foundations laid by the geniuses, scientists, achievers and daredevils who took risks and made the discoveries that allowed them to take flight. To celebrate such pioneering, The Monument to a Century of Flight in Kitty Hawk in North Carolina’s Outer Banks is a must-visit. Dedicated in 2003, just before the First Flight Centennial, there are 14 wing-shaped steel structures with 100 milestones etched onto granite panels. Situated high on a sand dune overlooking the crashing waves of the Atlantic Ocean, it’s easy to feel inspired. Here are six aeronautical highlights from the monument to remind you that inquisitive humans are never finished exploring, and a few recommendations about how to maximize your island experience.

Brothers Orville and Wilbur Wright were fascinated by aeronautics. Drawn to the Outer Banks’ regular breezes and sandy dunes (which could provide a softer landing spot), they went to Kitty Hawk in 1900 to start working on their gliders. After more than a thousand successful glider flights from the island’s Kill Devil Hill from 1900 to 1903, on December 17, 1903, they accomplished the world’s first sustained manned flight in a heavier-than-air, motored machine, the Wright Flyer. After that, inventors and pilots were off. In 1909, French aviator Louis Blériot became the first to fly across the English Channel in a 25-horsepower monoplane of his own design. Insider tip: Deepen your connection with a trip to the Wright Brothers National Memorial, where you’ll learn little-known facts and see a life-size replica of their famous airplane. Next, refuel with a meal at Black Pelican, a seafood restaurant housed in a building that once served as Lifesaving Station #6. It was the spot where the brothers sent a telegram announcing their successful flight in 1903.

The self-styled Madame La Baronne de Laroche (her real name was Elise Raymonde Deroche) became the world’s first licensed female pilot in 1910. The Paris-born French aviatrix, who also moonlighted as a stage performer, started out as a balloonist and won the 36th license issued by the Aéro-Club de France, part of the International Aeronautical Federation. She was just 24.

History’s most famous pilot—male or female—is arguably Amelia Earhart. In 1932 she became the first woman (and second person, since Charles Lindbergh flew his Spirit of St. Louis plane the distance in 1927) to fly solo across the Atlantic Ocean. To celebrate, Congress gave her the Distinguished Flying Cross and President Herbert Hoover presented her with the Gold Medal of the National Geographic Society. In 1933, Texas-born aviator Wiley Post completed the first solo around-the-world flight in his Lockheed Vega plane, the Winnie Mae. Sadly, Earhart disappeared somewhere over the Pacific Ocean on her own around-the-world attempt in 1937, creating one of flight history’s greatest mysteries.

Flying is all about doing something once thought impossible. From 1941 to 1946, the Tuskegee Airmen, the first Black pilots in the U.S. military, distinguished themselves in the Air Force. Overcoming overwhelming odds, their ace squads of fighter pilots made an immeasurable impact on World War II. The flight program got a publicity boost when first lady Eleanor Roosevelt took a 30-minute flight with the Airmen’s chief civilian instructor C. Alfred Anderson in his Piper J-3 Cub. During this thrilling and challenging decade, the United States launched the Women Airforce Service Pilots (WASP) program, training women to fly military planes. In 1947, West Virginia-born test pilot Chuck Yeager, who went on to become a Brigadier General, became the first to fly faster than the speed of sound in his Bell X-1 research aircraft, Glamorous Glennis.

Once the Earth’s atmosphere became the playground of airplanes—1958 saw more than a million passengers fly across the Atlantic and the Federal Aviation Administration (FAA) was established—innovators began to turn their attention to the next frontier: space. That same year, the United States launched its first satellite, Explorer 1 and established the National Aeronautics and Space Administration (NASA). The space race barreled ahead, and in 1961 Alan B. Shepard, Jr. became the first American in space aboard Mercury spacecraft Freedom 7. On July 20, 1969, Apollo 11’s Eagle lunar module landed on the moon and Neil Armstrong took his “giant leap for mankind” onto the moon’s surface. A little-known fact: fellow astronaut Buzz Aldrin took the Christian sacrament of communion while he waited to take his own moonwalk.

Always pushing barriers has been a hallmark of aviation history. In 1983, after completing its mission to Jupiter, Pioneer 10 became the first spacecraft (technically a probe) to leave the Solar System, headed for deep space. In 1990, NASA launched the Hubble Space Telescope into orbit around the earth to provide a look at our planet and the interstellar space beyond. From colorful nebulas to swirling galaxies, Hubble’s photos engage the imagination.

The Outer Banks have plenty of activities to inspire, whether you want to take a flight of your own or keep your feet firmly planted on the ground. Adventurers can get a bird’s eye view of the islands’ pristine coastline and top-notch photo opportunities aboard a Cessna, helicopter or a WWII biplane or catch some air with an exhilarating hang gliding lesson from the pros at Jockey’s Ridge State Park on Nags Head, the largest living sand dune on the East Coast. Travelers of all levels of daring can spot the heavenly bodies twinkling overhead at night. With little light pollution and plenty of wide open spaces, the Outer Banks are a favorite spot for stargazing, particularly in the fall.