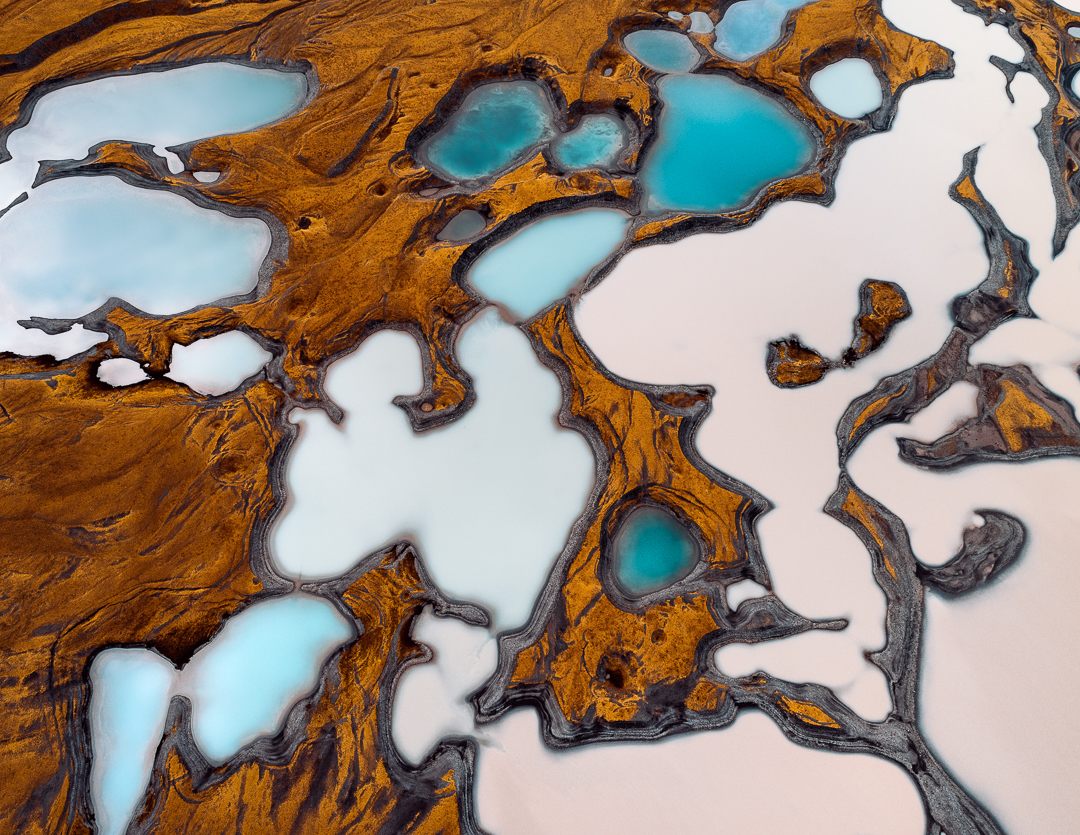 A smattering of glacial kettles. ALL PHOTOS COURTESY TOM HEGEN
In This Story
Destination Guide

From 2,000 feet up, the watery depressions between rust-colored surfaces look like something else entirely—agate maybe, or abstract paintings, or scaly skin, or sugar cookies flooded with royal icing. In actuality, they’re geological features known as kettles, proof of vanishing glaciers, and the focus of a new series, “Glacier Pools,” by photographer Tom Hegen.

To capture these aerial views, Hegen trained his camera out the open window of a small, circling plane, again and again, above Iceland’s Southern Region. (He’s not disclosing the specific location, in an effort to keep the area from becoming crowded.) The photographer, who is based in Germany, was captivated by the landscape, stippled with a smattering of glacial kettles ranging in color from muddy to milky to turquoise.

These shallow ponds form in outwash plains, or sandurs, at a glacier’s toe. As glaciers recede, they leave sediment embedded with chunks of ice, and as these buried blocks melt, they form divots, which then fill with water.

Kettles can stretch a few feet, or several miles. While they’re easily visible on the ground—Hegen has seen them up close, on foot—they can be especially astonishing from the sky. The vantage “is rather spectacular,” he says. “I was absolutely amazed by the shape, color, and rhythm.” Those varied hues correspond to the amount of sediment and the depth of the water, he adds: “The deeper or clearer the water, the bluer the pond.”

Iceland’s glaciers are undoubtedly shrinking. In the new book The Secret Lives of Glaciers, glaciologist M Jackson reports that the country’s frozen giants will lose at least a quarter of their current volume over the next five decades. “How Icelandic glaciers appear today is likely to be unrecognizable to you and me in a few decades, and simply incomprehensible to ensuing generations looking through your old vacation photographs,” she writes in an excerpt published in National Geographic.

Long after the glaciers are gone, the land will still hold proof that they had been there. Valleys, lakes, and other features will remind future people that these masses once moved over the Earth. (North America’s Great Lakes are a prominent example.) Atlas Obscura has a selection of Hegen’s photos below. The images are reminders that a changing world can be stunningly, somberly, starkly beautiful.

The Oddly Named Energy Bar That Rocketed to the Moon

The Alaskan delta, one of the world's largest, is a ‘mosaic’ environment best visualized with a psychedelic palette.
sinkhole

Receding waters are leaving behind an environmental disaster, and a new kind of tourism.
lakes

The revival of Lake Menindee is the latest chapter in a battle over water management, environmental protection, and indigenous rights.
glaciers

In the aftermath of an extreme melt event, what do scientists see in the Greenland Ice Sheet’s swirls of white, blue, and ominous gray?
Video • AO Docs

4:51
Want to see fewer ads? Become a Member.
From Around the Web
Atlas Obscura Trips
Iceland in Winter: Natural Wonders & Ancient Legends
View This Trip
Thanks for sharing!