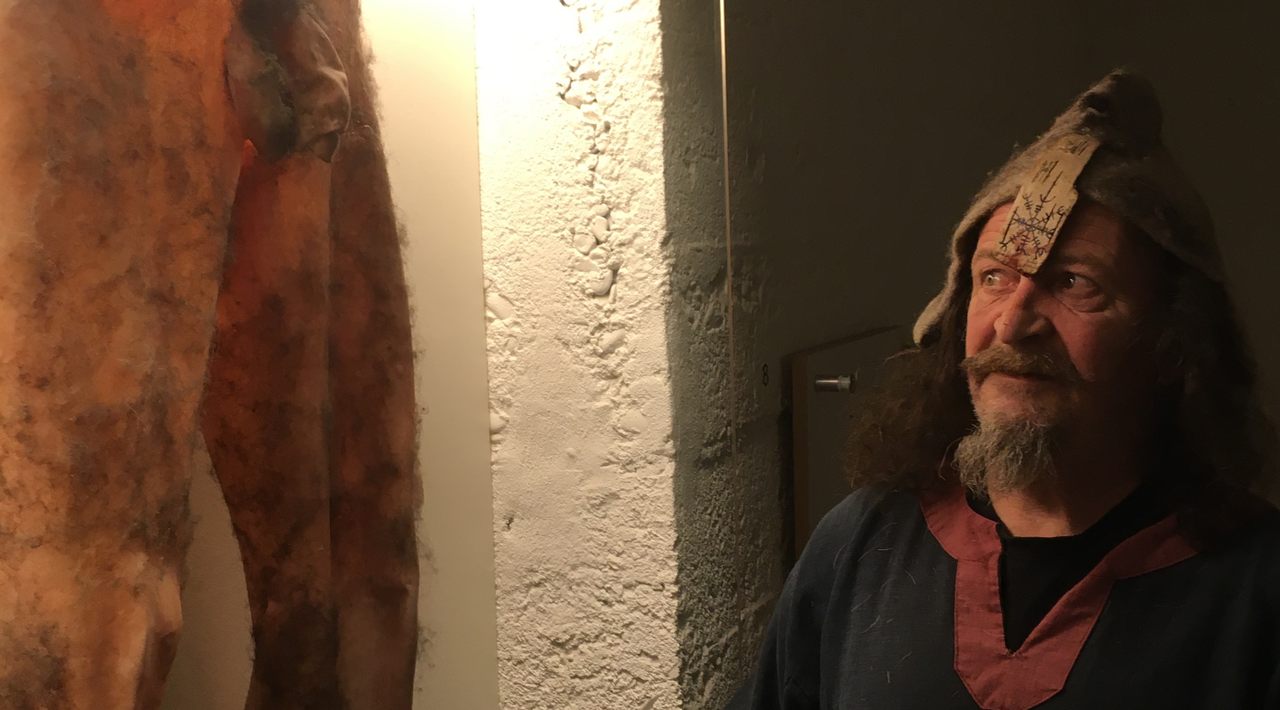 Even Siggi is unsettled by the necropants. Eric Grundhauser/Atlas Obscura
In This Story
Place

The Museum of Icelandic Sorcery & Witchcraft

Tucked away in a small, unassuming building in the town of Hólmavík, in Iceland’s Westfjords, is a museum that holds some truly gruesome displays of 17th century sorcery. There are pants made of human skin, which are said to give the wearer unlimited wealth; you can see magical sigils called staves, thought to offer powers ranging from the ability to see ghosts to making someone fall in love; and strange two-headed snake creatures that are born to steal goat’s milk.

While all of this arcane weirdness could be viewed as little more than an out-of-the-way collection of oddities, for both the curator of The Museum of Icelandic Sorcery and Witchcraft, and the town of Hólmavík itself, the exhibitions here are an important reminder of a darker time in local history. Oh, and they’re also really great at bringing in tourist dollars.

The museum was established in 2000 by a group of people from the town aiming to drive tourism to the area, led by the impish Sigurður “Siggi” Atlason. During the 17th century, Iceland experienced what Atlason calls a “witch craze,” not unlike the early American persecution of so-called witches in Salem. While there were examples of alleged sorcerers being hunted down all across Iceland, a great many of the reported cases stemmed from the Westfjords. Ever since, the whole region has maintained the air of a place steeped in magic and folklore.

“It’s the landscape, it’s the history, it’s the tales from this area,” says Atlason. “People from other parts of the country, they always believe that people here in Strandir, which is the east coast of the Westfjords, they have knowledge of occult. [The people in these remote locations] are supposed to be strange, and have some knowledge that nobody else has.”

As a way of both embracing this local history, and highlighting an evocative sliver of Icelandic culture, the group landed on the idea of a sorcery museum. The concept presented the museum’s creators with a few unique challenges. For starters, focusing on the rituals and witchcraft of 17th century Icelandic sorcerers meant finding a way to create an exhibition of occult artifacts of which there are no surviving examples. It took them over two years researching annals, grimoires, priest books, and judge’s papers from the time to put together a collection of the strangest and most bizarre workings they could find.

“This actually could have been something else,” says Atlason. “This small museum could have been a research center about whales, or whale-watching, or hiking paths, or whatever, but the dozens [of locals] that were involved, including me, we have all been quite interested in history, especially myth and folklore.”

To bring these centuries-old rituals and symbols to life, the group employed a team of designers who had experience working in film and television. Working from historic descriptions, they were able to recreate such gruesome sights as a pair of necropants (the fleshy translucence and realistic hair are even more disturbing up close), and an undead skeleton bursting through the concrete floor (a ritual for creating a zombie is another highlight of the museum).

Even with the logistics of the place sorted out, some people in the area were not exactly enchanted by the idea of a witchcraft museum. In addition to a negative response from some conservative Christian opponents, many locals in the tiny communities around the Westfjords still felt the pain that the witch craze had brought to their ancestors hundreds of years before. “We are talking about family, and friends, and therefore, there were people in this area that really disliked this idea,” says Atlason. “We had to go do some radio interviews, and confront some very strict conservatives. And we lost all the debates there, because you don’t want to start to be unreasonable and start to speak about stupid things.” Despite the vocal opposition, when the museum finally opened, Atlason says his opponents realized that it was neither blasphemous nor insensitive to the memory of those who had died during the witch craze. The museum became a hit.

Five years later, they were able to expand to a second location in the Westfjords, called the Sorcerer’s Cottage. Atlason would like open a third exhibition in still a different town in the area, stressing the need to lure tourists to neighboring small towns. “This project is about supporting the tourism. Not only in Hólmavík. Hólmavík is part of the area, and the coast is quite long. And that is why we did not build one big one here in Hólmavík.”

Today, The Museum of Icelandic Sorcery and Witchcraft draws regular crowds to Hólmavík, who come to see the necropants or the “Invisible Boy.” But for all the popularity of the more sensational aspects of the museum, Atlason still sees it as a reminder of the hard lessons of witch hunts past.

These days, visitors to the museum who catch one of Atlason’s talks might hear him compare Iceland’s 17th century witch craze to the modern rise of Islamophobia. He’s not shy about the fact that much of the sorcerous artifacts on display, and the violence that accompanied them, were a direct response to the complicated class and power systems at play in 17th century Iceland. He sees that same fear-mongering and social control at play today. “We just have to have more sense, because this is happening now. Same thing. It is a kind of witch craze, it is a witch craze against them. It is sad, because we have seen it so many times. We are always talking about this.”

One woman in London is dedicated to starting the world's first physical space wholly dedicated to vaginas.
shipwrecks

More than 200 enslaved people perished when the Portuguese ship sank in 1794.
museums

Lie back on what might be the world's most famous psychoanalytic couch.
Video • AO Docs

06:59
Sponsored by Visit Seattle
Want to see fewer ads? Become a Member.
From Around the Web
Atlas Obscura Trips
Iceland in Winter: Natural Wonders & Ancient Legends
View This Trip
Thanks for sharing!