Iceland's Yule Lads Are Like 13 Demented Santas and They Are Amazing - Atlas Obscura
Want to see fewer ads? Become a Member. 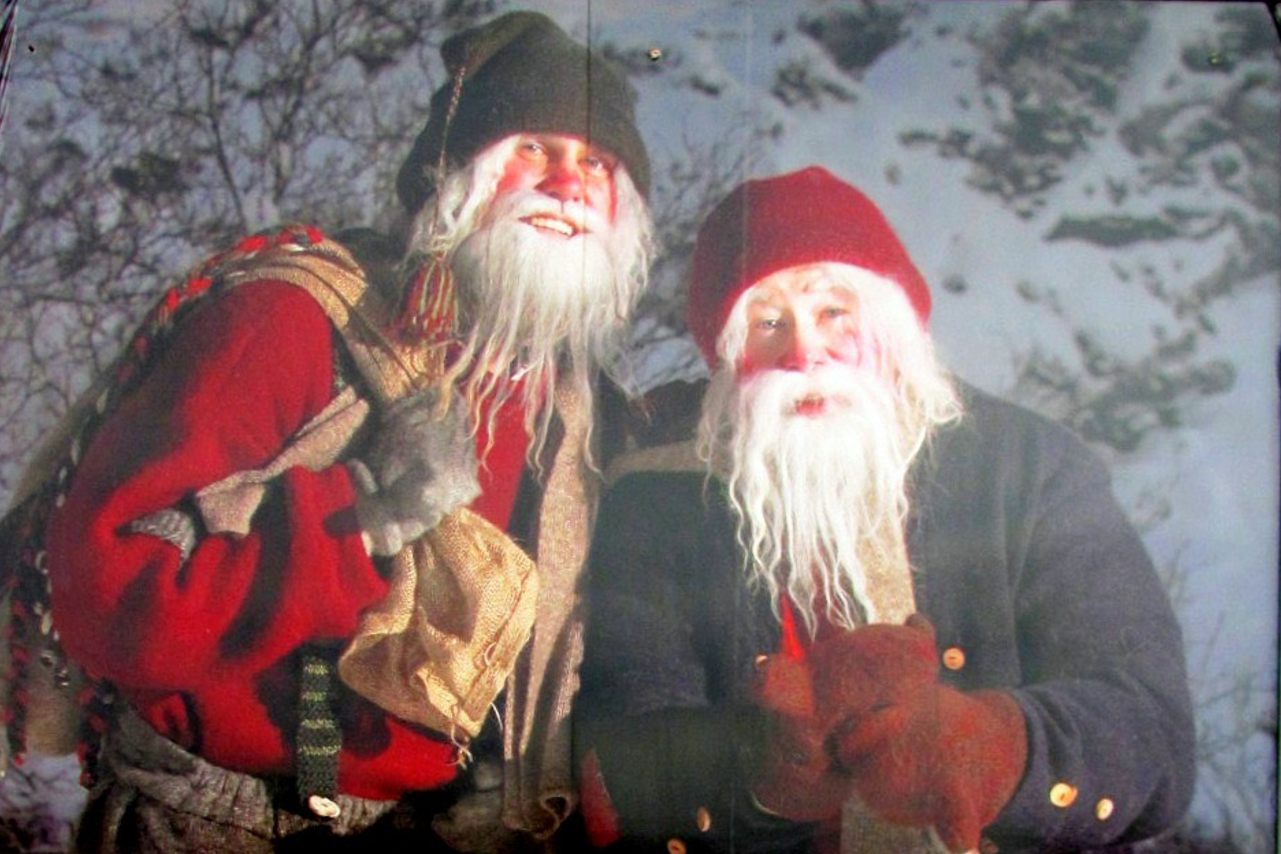 Yule Lads on a billboard inside a state park in Iceland, where they are reputed to live. Lusinemarg, CC BY-SA 4.0
In This Story
Destination Guide

Not every beloved holiday tradition escapes its native land. “Unless you are lucky enough to have been born an Icelander, or have lived in Iceland through a Christmas season, you probably won’t have heard of the Yule Lads,” reads The 13 Yule Lads of Iceland, a children’s book by Brian Plinkington, presumably for non-Icelandic kids to learn about the holiday myth. One by one they’re said to visit children in the 13 days leading to Christmas. Children leave their shoes on the window, and if they’re good they’re filled with candy and toys, and if they’re bad they get a raw potato. They’re also to leave specific treats for each lad, corresponding to his personality. There’s Stekkjarstaur (Sheep Worrier), who gets milk, and Pvoruskleikir (Spoon Licker), who prefers spoons covered with batter.

The Yule Lads share a lot of notes with other Christmas traditions aimed at keeping children in line: be good and you get toys and sweets, but if you’re bad you get coal, a potato, or possibly put in a sack by a Krampus. But according to Magnús Skarphéðinsson, headmaster of Iceland’s Elf School and one of the country’s top elf researchers, the Yule Lads’ benign treatment is a recent invention. The lads are actually terrifying and destructive creatures. Also, they’re real.

“The yule lads are like the hidden people,” says Skarphéðinsson. The Huldufólk, or hidden people of Iceland, are creatures that live “in another dimension, very close to us.” According to Terry Gurrell, a Folklorics professor at the University of Iceland, in the 12th century there was a “clear conceptual difference between nature spirits and alfar,” the elves of the Nordic settlers. Iceland was a multicultural place, and over time these separate concepts have morphed together into that of the hidden people. Now, there is a theory that they were the dirty, strange children of Eve that she hid from God, and when God discovered her secrets, condemned them to an alternate world. Others say they are fallen angels.

Icelanders take the hidden folk very seriously. The Elf School has catalogued numerous accounts of Icelanders interacting with the hidden folk, such as a young girl who heard a rock yell If you do not come down from the rock at once, you will be punished!” while she was standing on it, or the woman who saw a group of people singing on a nearby hill before they disappeared. (The woman and her sister “were good and trustworthy women,” notes the Elf School.) This may sound like the way some people treat Bigfoot or the Loch Ness Monster, but The Elf School cites figures that say 54 percent of Icelanders believe they are real. They are more than just a myth.

However, over the past 100 years, Skarphéðinsson says the Yule Lads’ public image has changed. Before the Yule Lads became mischievous but friendly characters who came to lick your spoons, they were terrors. They were the sons of two ogres, Grýla and Leppalúði, and were accompanied by the Yule Cat, who would snatch up children. “These yule lads were rather mean guys who stole the Christmas food,” says Skarphéðinsson. “They would be hanging by your window or sniffing around when you’re cooking smoked lamb.” Instead of kindly requesting a glass of milk, Stekkjarstaur would steal it from sheep, possibly leaving the family without nourishment. Kertasnikir (Candle Beggar) would eat tallow candles, leaving the family without light or warmth in the endless Icelandic winters.

Do not misbehave, children, or you will starve and freeze. Much worse than a potato.

Christianity came to Iceland around the year 1000 AD, after the King of Norway decreed everyone should be Christian and sent missionaries to convert the island. Of course it didn’t wipe out the Icelandic traditions that existed, but it allowed them to merge with Christian traditions, and eventually dilute them. Also, the Christians were none too taken with the idea of thieving trolls roaming the mountains. A 16th century law said “All disorderly and scandalous entertainment at Christmas and other times and Shrovetide revels are strongly forbidden on pain of serious punishment,” and in 1746, a public decree was issued prohibiting parents from scaring their kids with stories of the Yule Lads.

As with many tales of creatures that exist just beyond our reach, there were always conflicting accounts about the Yule Lads. Some say there were 80 of them, some 13. They had different names and different personalities. But in 1932 they received a revival in the poem “Jólasveinavísur” by Jóhannes frá Kötlum, which reads like Iceland’s “Twas The Night Before Christmas.” Here, the Lads are depicted as pranksters who would steal food and pans. They’re still mean, but somehow the rhyme makes their deeds go down smoother. It starts to make the 13 nights of pranks sound fun.

Skarphéðinsson says that recently, depictions of the Yule Lads have begun resembling Santa or St. Nicholas. They’ll be dressed in red with sacks of toys to leave in shoes around the country. But those costumes don’t reflect what the Yule Lads, the real ones, look like when Icelanders have actually seen them. “I have met more than 800 Icelanders that have seen elves, and 4 or 5 that have seen Yule Lads, says Skarphéðinsson. “They were old fashioned dressed, poor, a little dirty, a little rude and hungry, trying to get food.” They were as they were before Christmas took over.

The Yule Lads have turned comforting and cute, but they are not real in the way they exist now. Like with Santa, children eventually learn it is their parents who are putting candy in their shoes and drinking the milk left out overnight. The friendly Yule Lads are a myth. But the real ones, the ones who are smelly and rude, who terrorize sheep and steal food, they might still be out there, just beyond our dimension.

Meet the Most Famous Michigander in Kazakhstan

At Milwaukee’s Krampusnacht, we go in search of the essence of Santa’s unholy enforcer.
holidays

This is how you do the holidays in the desert.
List

12 places to marvel at the history of human language.
Video • PinDrop

1:35
Want to see fewer ads? Become a Member.
From Around the Web
Atlas Obscura Trips
Iceland in Winter: Natural Wonders & Ancient Legends
View This Trip
Thanks for sharing!