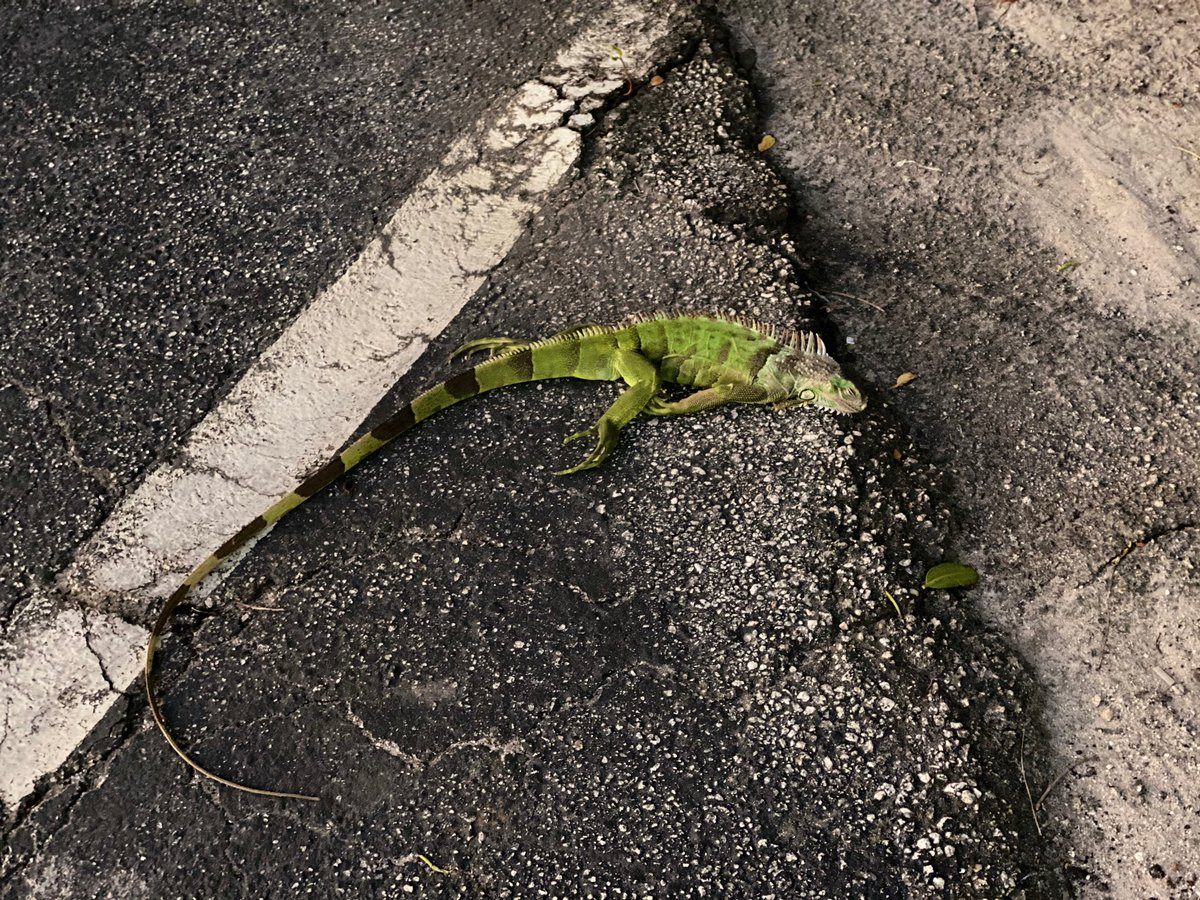 A stunned iguana photographed on Virginia Key, a barrier island off the coast of Miami. Courtesy Eric Blake
In This Story
Destination Guide

This story was originally published by The Guardian and appears here as part of the Climate Desk collaboration.

It truly was the night (and day) of the iguana.

After the National Weather Service sent an unusual alert to south Florida residents on Tuesday night, warning them of possible “falling iguanas” in light of unseasonably low temperatures, residents were indeed treated to a show of rigid reptiles out of the sky (or, actually, the trees).

The not-so-small creatures were seen motionless in the middle of sidewalks and backyards. While they looked dead, they were actually just too cold to move. Iguanas start becoming sluggish when temperatures drop below 50F and are susceptible to freezing once temperatures drop to around 40F. When frozen, they easily fall out of the trees they call home, appearing lifeless even though they aren’t dead.

Floridians shared videos of the phenomenon, giving Twitter an up-close look at the green-scaled reptiles that are probably dreaming of warmer climates, or at least spring.

One Twitter user happened to capture the resurrection of an iguana as it took in some warmth in the sunshine and slowly crawled back to life after being temporarily frozen.

Iguanas are an invasive species in Florida and can be little nuisances when not frozen. They can damage infrastructure by digging small burrows into sidewalks or foundations and leave droppings on decks and inside swimming pools.

Wildlife conservationists recommend people not touch frozen iguanas as they may come back to life and feel threatened if a person is close.

Conservationists are teaming up with fossil experts to help the bivalves—and the state's oyster economy—survive.
art

The preservation of a heritage trail, where the author and anthropologist spent the last years of her life, takes a whole community.
sports

Tarpon, a powerful game fish, helped make the state a tourism hub more than a century ago.
food