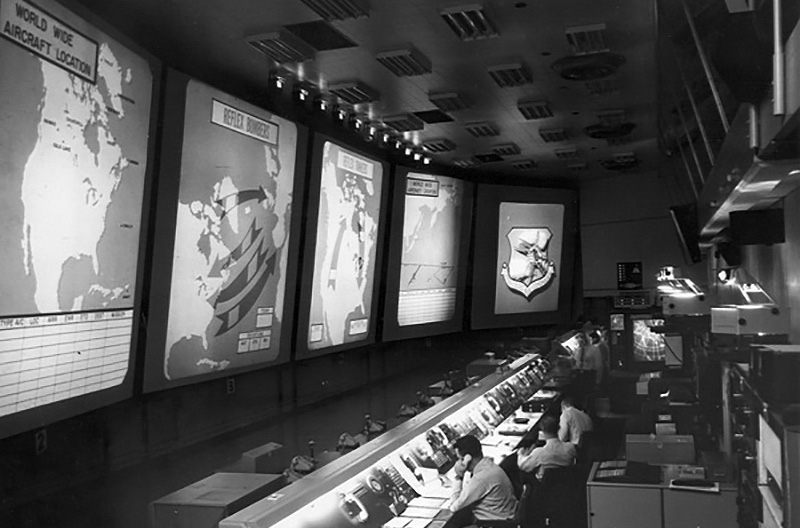 In 1961, all around America, small, cylindrical canisters were being installed at the top of Western Union telegraph poles. The canisters were colored white and topped with a Fresnel-type lens, the same refractive technology that allowed lighthouses to beam light far from its source. These lens, though, were not meant to beam energy outwards but to capture it. In the case of a nuclear attack, they would provide the first alert to the military’s nuclear commanders, signaling where the Soviet Union had hit the United States.

The “Bomb Alarm System,” designed and implemented by Western Union, wasn’t a secret, but it was unobtrusive enough that unless you were looking for it, you wouldn’t know it was there. Operational from 1961 to 1967, it was a part of the hidden infrastructure that was rapidly built to allow the U.S. military to respond to nuclear attacks—an extensive communications and monitoring system that presaged today’s networked world.

The bomb alert system depended on the unique wave shape of the thermal radiation created by a nuclear blast. As Clarence Deibert, the engineer in charge of designing the system, explained in the January 1963 Western Union Technical Review, a nuclear explosion creates energy with a shape that “distinguishes it from all natural sources of thermal radiation”—two pulses, one fast and short, the second slower and longer. The lenses that topped the alarms contained photocells that would register only that particular wave shape. Flashes of energy from a storm or other natural burst would not trigger it.

These alarms were arranged in triangles around about 100 cities and military sites in the U.S., on Greenland, and in the U.K. The three points of the triangle were far enough apart that even if one alarm was destroyed in the blast of a nuclear bomb, the other two should register the attack. At all times, each alarm was transmitting a special tone to a nearby station, via commercial telephone or telegraph lines. That tone meant the system was green—that no explosion had taken place. But if the alarm registered that specific wave of thermal radiation, it would transmit two different tones, in quick sequence, that would turn the system red.

That alert would reach military commanders on maps at central locations—the Pentagon, the North American Air Defense Command, and at Strategic Air Command, the hardened underground command center where the military’s nuclear commanders sat. The SAC headquarters, in particular, had a giant wall of maps on which they could monitor the state of the Cold War’s nuclear stand-off. The “big board,” as it was called, was 264 feet long and two stories high; originally, military aides rode in cherry-pickers to update the board, which showed everything from strike routes aimed at the USSR to military exercises taking place at that very moment. An early warning system was supposed to alert the military to approaching bombers or missiles, but the bomb alarm system would be the first signal that a nuclear weapon had hit the United States.

At the time, these networks were “the most advanced communications system ever built,” the military claimed. But it had weaknesses. Once, a single downed AT&T switch convinced military leaders the country had been attacked when they couldn’t reach major command post, as journalist Eric Schlosser writes in Command and Control, his book on nuclear weapons and safety. In a real attack, the infrastructure that was supposed to send these type of alerts could be destroyed by strategic strikes on key network nodes.

In its drive to solve these problems, the military started laying the groundwork for the communications infrastructure of today. By the end of the 1960s, the bomb alarm system was outdated, as new satellite monitoring replaced it. And concerns about the robustness of military communications in a nuclear attack inspired RAND researcher Paul Baran to propose a network of distributed communication—an idea that evolved into the military’s revolutionary ARPANET and matured to become the internet.

The Story Behind Gay Bob, the World's First Out-And-Proud Doll

A new book collects 33 routes that went off the rails.
atom bombs

Oak Ridge, Tennessee, once home to 75,000, went up fast and under the radar. But it was built to last, too.
science

A second life for an organization of scientists who questioned how their work was being used.
infrastructure

This quixotic colonial barrier was meant to enforce taxes.
Video