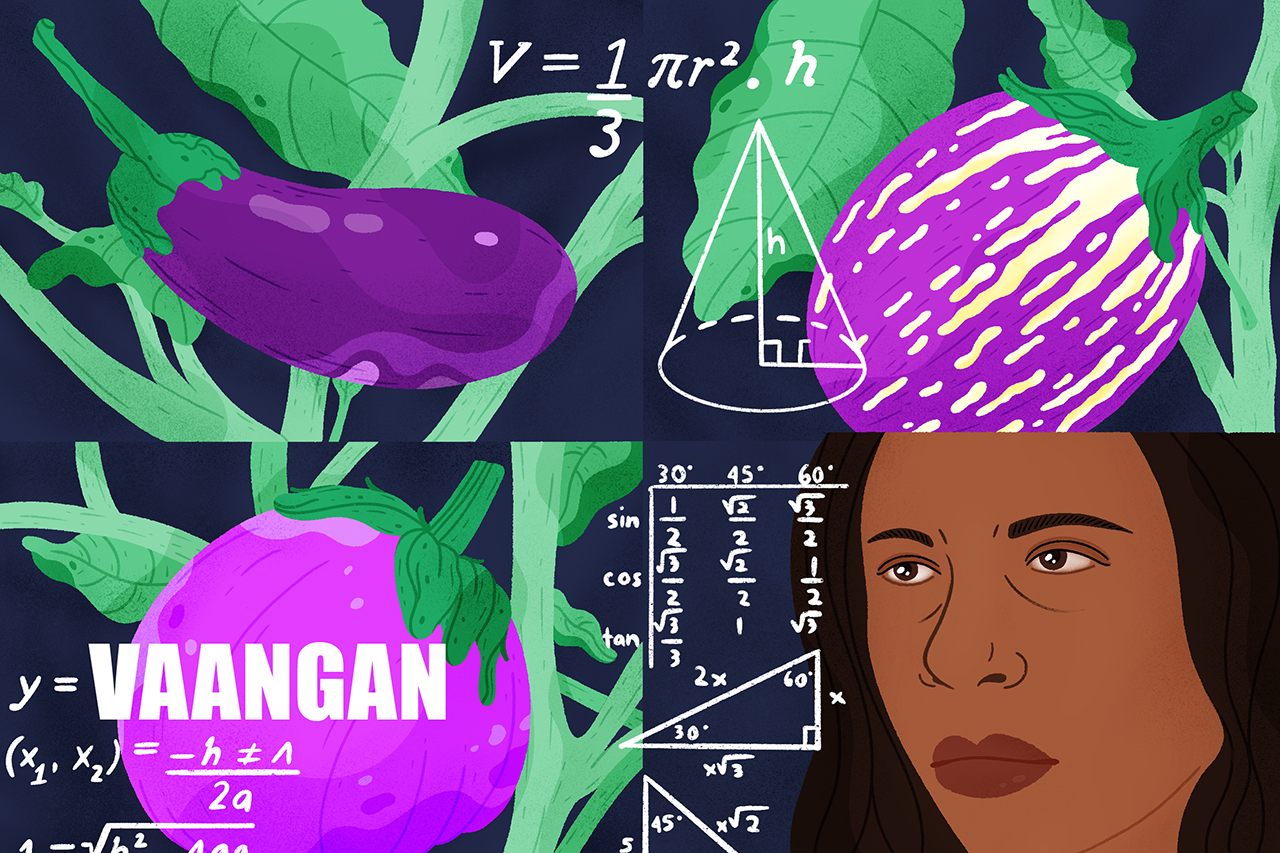 Vaangan—an eggplant—is a person lacking in common sense in Sindhi. All illustrations by Thumy Phan for Atlas Obscura
In This Story
Destination Guide

It was 15 years ago when they first started talking about dirty words. Tamanna Mishra and Neha Thakur often discussed how uneasy popular Indian expletives made them. Mishra, a communications consultant in Bengaluru, and Thakur, an Airbnb host in Mumbai, noticed increasingly casual use of these profanities in mainstream entertainment. The problem wasn’t the swearing itself, but they were bothered that many of these expressions seem to have biased, bigoted, or misogynist origins. This spurred the two women to launch The Gaali Project on social media in September 2020, to crowdsource gaalis (the Hindi term for slang, including both curse words and a range of colloquial insults and expressions of frustration) from across India that do not use gender, community, caste, or disability in a demeaning way. They’ve since seen a flow of gentler profanity, in various regional languages, approximately a thousand so far. After vetting the submissions, the women share them through memes and graphics on the project’s social media pages. Their hope is to find a disagreeable vocabulary on which everyone can agree.

“Gaali, magar pyaar seh. It is human to vent. But express yourself with grace,” says Mishra, explaining the tagline of the project, which translates to “Curse, but with love.” “Hakri hoon is one of my favorites,” she adds, a Kashmiri term for an eavesdropper, derived from a folktale about a wandering mythical creature, resembling an itchy dog, that puts its ear to people’s doors. Kirmi kaadi from Kerala, the itching caused by a worm, expresses jealousy. Vaangan, an eggplant, is used by Sindhi speakers to refer to a person lacking in common sense, while thaali ka baigan, in Hindi, describes fickle-mindedness by comparing it to an eggplant rolling around on a platter. Some other expressions in their catalogue are more like traditional swearing: bawaseer ka nasoor, a “hemorrhoid wound” in Urdu, is for someone who is a pain in the ass. The Marathi fukat hawa (“gas talk”) describes a show-off. “The idea was to create a fun platform for a conversation around the common swear words we use and the misogyny and bias behind them,” Mishra says. “Finding amusing and alternative words is what we feel will work best in engaging people to be mindful of the language they use.”

Gaalis are not just swear words, but a more expansive vocabulary of slang used across the subcontinent. For example, lah bong is used to express exasperation in Khasi, a language used in Meghalaya, and bakthoth describes a blabbermouth in the state of Jharkand. Though swear words have become increasingly heard and accepted in everyday use over the last decade, the attitude toward swearing in India has generally been influenced by class. In most middle-class homes, coarse expletives, whether in English or a local language, are taboo. Swearing was often associated with the working class. Anindita Chatterjee, sociology professor at Symbiosis International University in Pune, articulates this elitist aversion to being identified with other classes. “In Kolkata, where I grew up, expressions like ‘Don’t behave like an auto driver’ [being uncouth] or ‘Don’t eat like a farmer’ [in large quantities or with unacceptable manners] were expressions I heard in middle-class homes,” she says. “This genteel aggression is often overlooked … though they are damaging and offensive in their intent.” There is an endless range of these gaalis that are not outwardly vulgar, but there are also many that are.

Indian expletives are not different from others from around the world for having bigoted or misogynistic roots, but there are some distinct characteristics there: Many of the most offensive insults surround gender, honor, incest, or religion. And though they’re used so often that they shed some of their literal sense, they still reflect underpinnings of misogyny or intolerance. “In a patriarchal society, women are possessions of men. Women-centric gaalis were intended as an attack on male honor,” says Aditi Ghosh, the head of linguistics at the University of Calcutta. Others are anchored in the Hindu caste system (outlawed but still prevalent as a form of social structure), such as bhangi, a historically oppressed caste relegated to bathroom cleaning and scavenging, which is used to describe someone who is unkempt. Gender, caste, or other forms of bias-related crimes continue to be a problem across India, and trolls on social media often use such gaalis in their online threats and harassment.

The creators of The Gaali Project want to create space in India, which has more than 780 languages, according to the People’s Linguistic Survey of India, to vent in a safer, more culturally appropriate way. “The gaalis we receive are colloquial, so we check with native speakers on their origins and context,” says Mishra. Around 40 percent of the submissions so far have been filtered out because of suggested or obvious biases, such as the Malayalam word pottan, or “fool,” which is used more specifically to suggest a man is effeminate.

Cultural context is important. A series of gaalis build on the popular Indian admonition, “one tight slap,” often used by frustrated parents or grandparents in an “or else” situation if their children do not listen to them: kaanbhairi in Hyderabadi Urdu, chapedd in Punjabi, or thappor in Bengali. Though there is growing awareness and discussion in India around the effects of physically disciplining children, the “occasional smack” style of parenting has long been considered acceptable and normal. “The inclusion of these terms is not to trivialize physical violence in any way,” says Mishra.

“We got the maximum amount of feedback on these posts, which were warm and positive associations with childhood memories. It can of course trigger negative memories for some, but for many it is humorous. You could use far more hurtful language to express your frustration, these are less loaded words,” says Thakur. She adds that insults or expletives, biased or not, are intended to shock or offend in some way. “It wouldn’t be a gaali otherwise,” says Ghosh. “You are trying to show yourself in a more advantaged group than the other. Some are milder categorizations than others, so perhaps one is preferable.” Mishra and Thakur understand that what is acceptable at one moment might not be in the future. “Language is constantly evolving. As this space evolves, so will the project,” says Mishra.

But will people actually change the way the show exasperation or disdain? “Most people do not consciously want to use a biased gaali. You use a gaali to vent, not to propagate misogyny,” says Mishra. They’ve heard from some people that they’re reluctant to change because they feel other phrases don’t convey the same intensity. But as linguist Asher Jesudoss explains, it’s really about the construction of words. “The most effective swear words are generally a maximum of three syllables and have plosions—linguistic explosions—that help with the emotional release, like ‘kh,’ ch,’ ‘bh.’” Thakur and Jesudoss agree that some gaalis may be easier to use than others. “[But if] it’s really about the tone and expression,” Thakur says, “why use a bigoted word?”

The founders intend for the project to grow through different mediums, and to evolve. “One Gaali Project is not going to change the landscape, but it’s one step forward,” Mishra says. “It’s creating that mindfulness.” An interesting side effect could be that it makes people realize that the way they vent anger or frustration is something that everyone has in common.

Podcast: The Grave of Miss Baker

For decades, these women have fought (and won) the right to stunt.
military history

From Italy’s fortress-seizing countess to Angola’s battle-hardened Queen Njinga, these women didn’t back down from a fight.
puzzles

Now surging in popularity, the iconic pronoun was first used on the other side of the Atlantic in the 17th century.
Video

3:35
Sponsored by Olukai
Want to see fewer ads? Become a Member.
From Around the Web
Atlas Obscura Trips
Delhi and Rajasthan: Colors of India
View This Trip
Thanks for sharing!