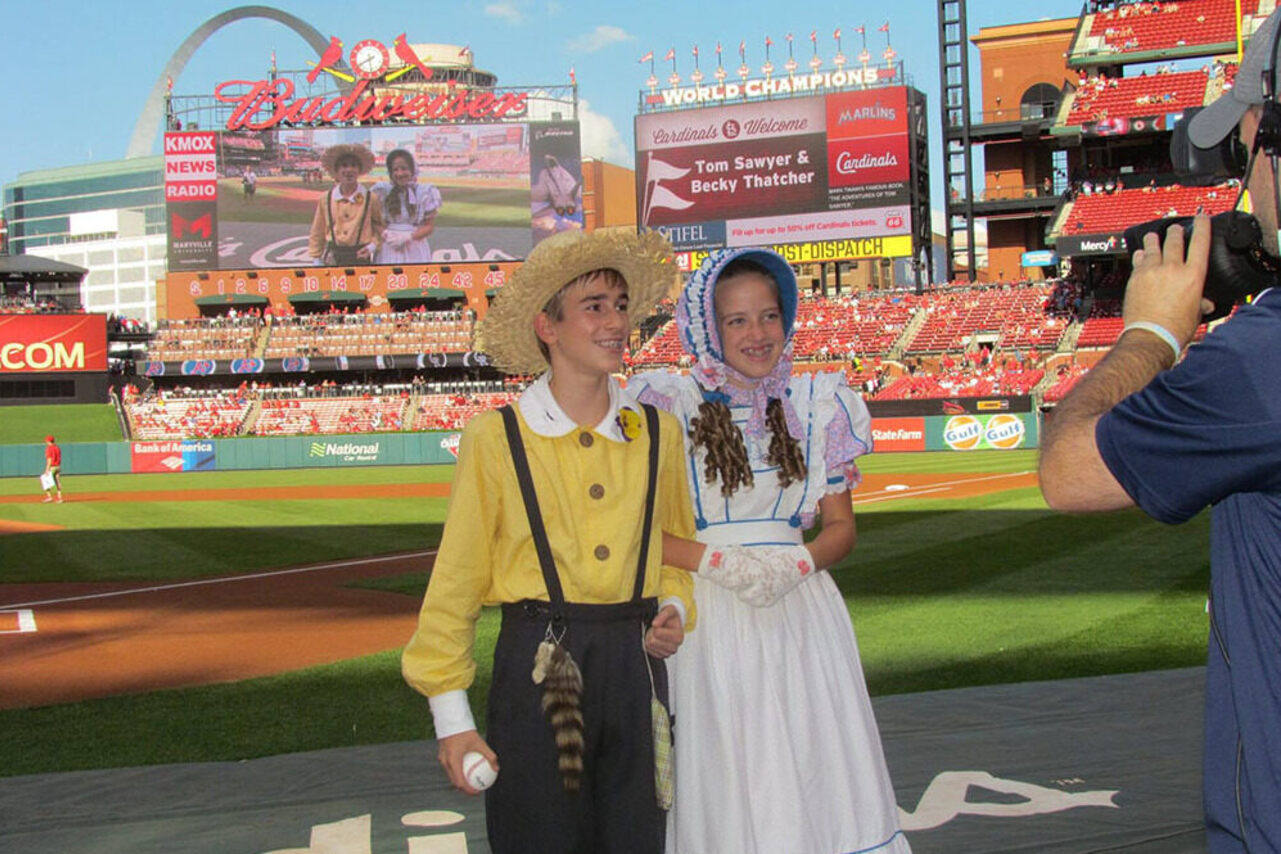 Hannibal, Missouri, a town of 18,000 on the banks of the Mississippi River, has one claim to fame—it’s Mark Twain’s birthplace—and claim that fame it does. On the drive from St. Louis, billboards advertising the Mark Twain cave—the cave that was featured in five of Twain’s books, including The Adventures of Tom Sawyer—begin appearing at least 50 miles outside town. When you enter Hannibal, the town is thick with Twain sites and Twain references — the Mark Twain Boyhood Home & Museum, the Mark Twain Hotel, the Mark Twain Memorial Lighthouse, and even the Mark Twain Dinette.

But perhaps the strangest embodiment of this literary destination is a contest called the Tom and Becky program.

Hannibal’s quaint main street is lined with historic buildings repainted in bright, joyful colors. The storefronts are filled with antique shops, gift shops, and ice cream parlors (with a generous sprinkling of “shoppes” and “ye oldes” in their titles, of course). On any given Saturday morning, you might see a 12 year-old boy and a 12 year-old girl strolling together down the street. He’s got a straw hat and a fishing pole in hand; she’s got white gloves and a slate board that says “I Love You” on it. They glance in shop windows, they gaze out at the river, they smile and wave, they stop in to Java Jive (the first coffee shop west of the Mississippi River!) for a refreshing beverage.

“We call them goodwill ambassadors,” said Melissa Cummins, coordinator of the Tom and Becky program and marketing and community relations manager for the Mark Twain Boyhood Home & Museum. Every year since 1956, Hannibal has named one seventh-grade boy and girl the official “Tom” and “Becky.” The Tom and Becky application process is long and demanding: it lasts from February to July and is comprised of a speech, a written test, personal interviews, costume preparation, and a two-day observation period by judges. Applicants are judged on their ability to tell Tom and Becky’s stories best, and on how well they’d do as public faces of Hannibal.

The program is billed as an opportunity for young people to develop public speaking skills and represent their community. Semifinalists are eligible to apply for a small college scholarship in their senior year of high school. Participants say it’s hard work, but it’s also fun and rewarding. Mason Latta, 14, one of this year’s Tom semifinalists, said that he’s been shy all his life, but being a Tom has turned that around. His arms, and then his legs, used to start shaking before any public speaking. “Now I’m able to talk to anybody,” he said.

Today, five boys and five girls are chosen as semifinalists. They share a demanding schedule of travel and public appearances, but one official couple is still chosen. The winners find out about their victory at the same time as the rest of the town: on stage in Hannibal’s Central Park on July 4th. “Last year’s official Becky opens an envelope containing the name of this year’s official Tom,” Cummins explained. “Then she weaves among the semifinalists with a fishing pole and plants a kiss on the official Tom’s cheek.” The same ritual is repeated for the new official Becky: the envelope, the weaving, the kiss.

At moments like these, it feels as though, among other purposes, the Tom and Becky contest might have been intentionally designed to publicly embarrass tweens. One of the most important tasks of any Tom and Becky is to be ready to perform the engagement scene from Tom Sawyer on command. After some banter about rats and chewing gum, the two kiss and Tom says, “Now it’s all done, Becky. And always after this, you know, you ain’t ever to love anybody but me, and you ain’t ever to marry anybody but me, ever never and forever. Will you?”

Aside from the strangeness of choosing this particular scene as the most representative of the two characters, watching it feels like bearing private witness to any middle school theatre kid’s nightmare: it’s like the one scene in the play they dread, but it’s performed in isolation and in perpetuity, any time anyone ever asks them to.

If adolescent engagements and public kissing give you the heebie-jeebies, there’s also the annual Tomboy Sawyer contest. Sponsored by the Business Women of Missouri, Hannibal Club, it offers an alternative competition for girls aged 10-12 who don’t feel they fit into the Becky Thatcher image. Young girls compete in events like minnow catching, watermelon seed spitting, bubble gum blowing, and slingshot target shooting.

But what values do Tom and Becky represent? Why are the youth of Hannibal encouraged to emulate these two characters from Mark Twain’s oeuvre? Tom Sawyer is mainly distinguished by his selfishness and immaturity and his ability to manipulate those around him. Becky Thatcher is proper and well-behaved, defined mostly in relation to Tom’s interest in her and always in need of rescuing. Huck and Jim, arguably Twain’s best characters, have stronger depth and moral fiber but exist on the margins of society—making them seem like less desirable choices, perhaps, for a program whose purpose is to build and promote Hannibal’s community. Cummins claimed that Tom and Becky are Twain’s most iconic characters, and are most reflective of Samuel Clemens himself.

Like Twain’s own work and legacy, this past is tied to issues of race, but there’s never been a black Tom or Becky, Cummins said. Although all seventh graders living in Hannibal, which is nearly 90 percent white, are personally invited by mail to apply, Cummins admitted that it’s difficult to attract non-white applicants—but she isn’t sure why.

“We took a deep look at the initial posters advertising the contest to make sure the language sounds welcoming to everyone,” she said. As a parent of two former Beckys, she believes firmly in the program’s value, emphasizing the playfulness and fun that the Tom and Becky program offers. “Kids grow up so fast these days,” said Cummins, “This is a chance for them to step back and see what childhood would have been like then.”

Why UFO Conspiracists Have So Many Opinions About 'Angel Hair’

It'll have you repeating after Becky, "I want to go home."
mark twain

What Did Abraham Lincoln Dream About? 8 Stories of Famous Dreams

When the Jersey Shore Was the Epicenter for Haunted Attractions

In the 70s and 80s, beachgoers delighted in low-budget frights.
Video

3:09
Want to see fewer ads? Become a Member.
From Around the Web
Travel With Atlas Obscura
Are you a curious traveler?
Join local experts in 50+ destinations for a once-in-a-lifetime journey.
View Our Trips
Thanks for sharing!