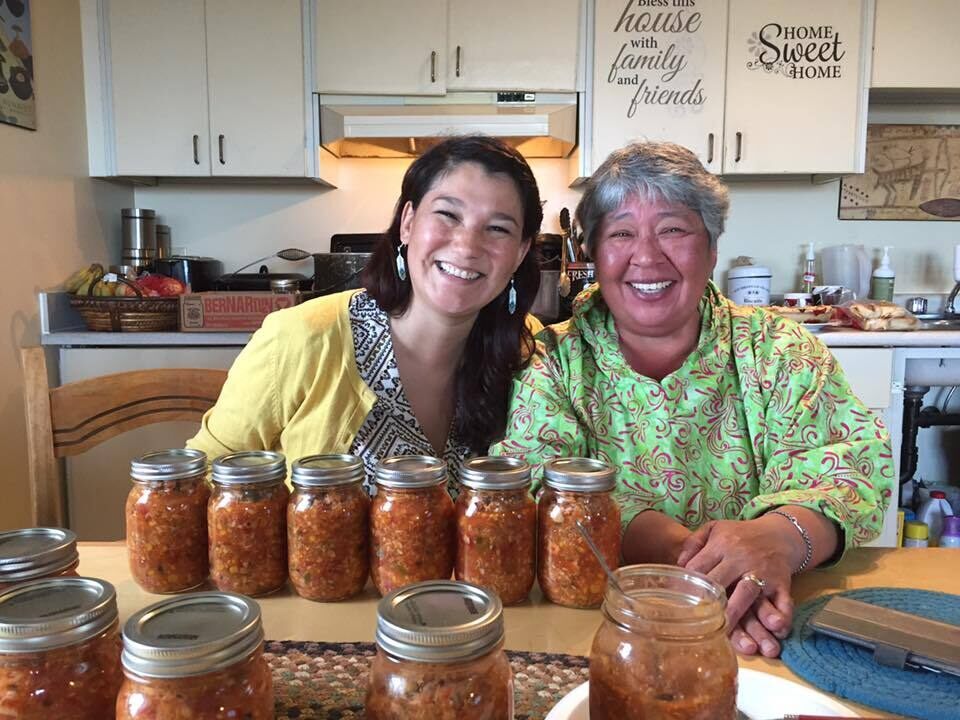 Like the territory itself, food in Nunavut is equally beautiful and bountiful. Within the landlocked center of Canada’s northernmost region, tuktu (caribou) is added to stir-fry or eaten raw in rich, buttery, deep-burgundy chunks. The stomach can be smoked for an extra-decadent snack. Near Iqaluit, seals are hunted on Frobisher Bay and hauled back to shore, where their gamey meat might be added to a hearty stew. Arctic char are wind-dried and smoked for a delicious, flaky appetizer. Maktaaq, or narwhal and beluga, is sliced up and passed around from a piece of cardboard on the kitchen floor. (Soy sauce and sriracha are favored dips to pair with the raw blubber.) If there’s extra meat from a hunt, someone will offer it up in a community Facebook page.

It’s one of the most interesting and sustainable cuisines on the planet, and that’s why Malaya Qaunirq Chapman is thrilled to host Nunavummi Mamarijavut, a cooking show highlighting local Inuit foods and traditions. The show, aired across the territory by the Inuit Broadcasting Corporation, will broadcast its second season in December. The Inuktitut title means “the food we love in Nunavut.”

“This is literally the best job in the whole entire world,” Qaunirq Chapman says over the phone from Iqaluit. When we speak, she’s just returned from shooting episodes for season three in Salliq, Naujaat, and Arviat, with emphasis on fish, maktaaq, and tuktu. “I really passionately love food, not even just as a profession. As an Inuk, eating my country foods is liberating.”

Country food is the term for the traditional foods—tuktu, char, seal, whale—harvested from the land and sea in Nunavut. Each episode finds Qaunirq Chapman and a crew of two cameramen in a different community across the territory, learning to hunt and prepare local food in both traditional and contemporary ways. Shooting in Nunavut is at once simple and challenging: the landscape is consistently gorgeous. But the weather can be fickle, especially in winter when sunlight is sparse and temperatures plunge to -58°F. The show doesn’t try to airbrush over the occasional difficulty. “With this show, we aim to be true and authentic with who we really are,” says Qaunirq Chapman. “We don’t have to manipulate anything to make it better or more beautiful, because it naturally is.”

Qaunirq Chapman, who serves as host and producer of Nunavummi Mamarijavut, created the show along with producer and friend Sylvia Cloutier. Like most Inuit, Quanirq Chapman grew up on this food. Raised by her great-grandmother, the two relied on family members to provide food for them, so she never learned to hunt. Now, in each community she visits, she learns local hunting techniques. “I tell them, ‘I’m learning how to hunt, I want to learn how to butcher,’ and so my relationship with this has changed a lot because I’m now a part of the hunt,” she says. “As a woman, they never belittle me. If you’re a hunter, you’re a hunter.”

Country food in Nunavut is indeed plentiful, but communities in the territory still suffer from widespread food insecurity. It’s an issue caused and compounded by colonialism and colonization in the north, which intensified in the 1950s. Nunavut became a strategic military interest, and both American and Canadian military forces built permanent settlements around airfields. Previously-nomadic Inuit were moved into these new communities—if not willingly, then by deception and force. Food costs in grocery stories in the territory are now double or triple the national average.

Food sharing in the territory doesn’t eliminate these systemic issues, but the supportive, egalitarian ethic behind it is more reliable than ineffective federal government programs. Qaunirq Chapman says that when they’re hunting for a shoot, the food isn’t just shown on film. After filming a successful beluga hunt in Naujaat, a call was put out to a community Facebook page so that anyone could come collect some of the catch. “When we’ve gone hunting with these people, the food is open to absolutely anyone and everyone in the community,” says Quanirq Chapman. “They don’t charge us. They just give it for free. This is the beauty and essence of Inuit in the north: the beauty of giving what you catch, and generously, without any hesitation.”

But the catch in Nunavut is changing. When Qaunirq Chapman visited Arctic Bay, a hamlet on the northern peninsula of Baffin Island, one of the community’s elders told her that the skin of the fish now is thinner and more delicate than it was when she was young, and the fish themselves are less meaty. Tuktu used to be found all around Iqaluit, but now there’s a lottery for hunting tickets. Qaunirq Chapman says hunters are also observing more illnesses in both fish and caribou.

A 2016 book, The Caribou Taste Different Now, demonstrates this in first-hand detail. A collection of research and interviews with Inuit across Nunavut, it details the ways that the climate crisis has already affected local food sources. Just as modern cooking techniques and accessible ingredients allow for new twists on age-old Arctic staples, such as Arctic char antipasto, modern climate crises are impacting the Arctic at accelerated rates. Communities across Canada’s three northern territories have declared local climate emergencies, and abnormalities in freeze and melt timelines have upset migratory patterns and made hunting more dangerous. And while urban dwellers might not have noticed until fairly recently the impact of the climate crisis on their lives, Inuit have for much longer. Back in 2005, a Lakehead University study conducted with the expertise of residents of Arviat and Baker Lake in Nunavut already observed marked environmental changes over the previous decade.

This adds another dimension to Nunavummi Mamarijavut: the food it celebrates is under an ongoing two-pronged attack. First from the climate crisis, and second from animal rights activists who target Inuit seal hunts, damaging economic prospects. “There’s a lot of discrimination towards Inuit and our foods and how we hunt,” says Qaunirq Chapman. She says critics wonder why they have to continue their traditional hunts when there are grocery stores full of food—an argument which ignores the cost and poor quality of food in grocery stores across the north. But it also doesn’t account for a deep cultural connection to their environment and its offerings.

“What they don’t realize is that farms are not humanely operated, and the animals have horrible lives,” says Qaunirq Chapman. “Our view of farms and such are [that] it’s sad because the animal never got to live a life the way ours get to roam free. The relationship with Inuit and our food is more than just superficial.”

This intimate partnership is coded into every aspect of Nunavummi Mamarijavut. The show also demonstrates how community-based practices help keep this cuisine alive. When Qaunirq Chapman cooks with her guests for the show, it is not in a manicured kitchen set. It is in people’s homes, in their kitchens and living rooms, leaning on the counter, or cross-legged on the floor.

“That’s the show’s identity,” says Qaunirq Chapman. “We don’t need to use big fancy words and big fancy cooking methods to really showcase the beauty of where we come from. Put a piece of cardboard on the ground, put the meat on there, and just eat. It’s beautiful. It’s the only way I ever want to eat.”

A new internet archive is making the region's culinary history more accessible than ever.
hospitals

A state-spanning network of volunteers powers the program.
film

The Food Stylist Who Creates Hollywood's Unreal Dishes and Drinks

Hearts made out of brioche and braised human legs are on the menu.
deserts

Treasured by the Tohono O’odham, saguaro fruit appear only in the Sonoran summer.
Video • Gastro Obscura

Researching traditional foods led them to the revelations of an archaeological dig in Kentucky.
Read more
Thanks for sharing!