A Healing Spirit From 19th-Century Japan Is Back to Face COVID-19 - Atlas Obscura
Want to see fewer ads? Become a Member. 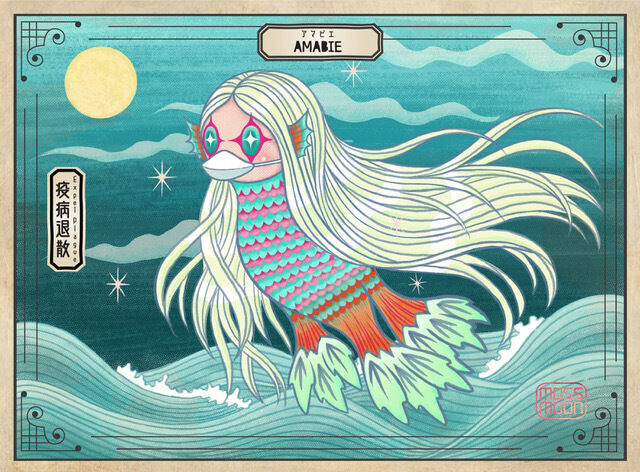 In the first half of 1846, a kawaraban, or cheaply printed broadside, recorded a strange account in Japan’s old Higo Province on Kyūshū island. A local government official had spotted a curious creature in the water one evening: a scaly, three-legged figure with long hair and a beak. Even more curious, it had warned him of a forthcoming illness and instructed him to draw and distribute its image for protection. A sketch was printed next to this account, and as the kawaraban spread, so did tales of this mysterious half-merperson, half-bird, from Kyūshū all the way to Edo.

Known as Amabie, this yōkai, or spirit, has become associated with refuge from epidemics. It makes sense, then, that it has resurfaced during the global COVID-19 pandemic, only this time on social media. Illustrations of Amabie are circulating on Twitter and Instagram under the hashtags #amabie and #アマビエ; artists around the world are drawing and sharing Amabie in hopes of repelling disease, or at the very least honing their talents and finding community while social distancing.

“I drew this Amabie with the intention to remind others to stay calm and never lose hope at times when we feel like giving up,” Ceruzen Lee, an artist from the Philippines who recently drew a cotton candy-pink Amabie with blue hair, writes in an email. “It was truly inspiring to find out that many other artists still remain optimistic despite the events in our world today.”

Scholars believe that Amabie is a local variation of Amabiko, a similar Japanese creature that appears from the sea and prophesies good harvests and outbreaks of disease. “In accounts of Amabiko, it is sometimes said that the image itself can ward off the epidemic,” says Jack Stoneman, a professor of Asian and Near Eastern Languages at Brigham Young University. “This is not unusual in Japanese cultural history—images as talismans.”

Illustrator Kaori Hamura Long, who lives in Fukuoka city on Kyūshū, felt flu-like symptoms earlier this month. Unable to get tested for COVID-19 due to Japan’s limited testing capacity, she decided to stay at home and draw Amabie. Her creation floats above rolling waters, a glamorous figure with flowing white hair and sparkling eyes. In one version, Amabie wears a mask; a second rendition shows the yōkai unadorned, with an apparent smile on its face. “I shared this image of Amabie hoping that the virus will die down and people all over the world will unite to fight the disease instead of finger-pointing each other,” Hamura Long writes in an email.

Japan reported its first positive test for the new coronavirus on February 20. According to Matthew Meyer, an artist who has written extensively on yōkai, the Amabie-drawing trend picked up steam in the first week of March, when Japan’s Prime Minister Shinzō Abe called for schools nationwide to close. The country now has over 1,100 confirmed cases, and has postponed the 2020 Summer Olympics in Tokyo by one year.

“It’s likely that it was a reaction to the sudden disruption of the daily routine,” Meyer, who also runs an illustrated database dedicated to yokai folklore, writes in an email. “People are still posting about one per minute, so it’s still going strong.” His own illustrated Amabie, a cheery character perched on a rock, doubles as a printable coloring page.

Amabie is just one of many yōkai believed to wander Japan and ward off evil. Originally disseminated through woodblock prints, this class of supernatural beings—such as Hakutaku, Jinja Hime, and Kotobuki—flourished in the Japanese popular imagination in the second half of the 19th century.

“These yōkai appeared during the period when Japan’s isolationist policy was forcefully ended by U.S. warships,” Meyer writes. “While the increase in trade brought lots of ideas and inventions to Japan, it also brought brand new diseases, such as cholera. The popularity of these yōkai was in response to the sudden and frequent epidemics that repeatedly struck Japan in the latter half of the 19th century, killing hundreds of thousands.”

These contemporary Amabie artworks seem to be born of the same impulse—to offer hope and relief in a moment of collective uncertainty.

"People wanted so much for there to be dolphins in the canals in Venice."
murals

An image of a brave doctor, large enough to be seen from space.
quarantine

A collaborative photo project tells personal stories of the pandemic in the U.K.
Video • Wonder From Home

9:58
Want to see fewer ads? Become a Member.
From Around the Web
Atlas Obscura Trips
Artisans & Exiles: Exploring the Hidden Traditions of Japan’s Sado Island
View This Trip
Thanks for sharing!