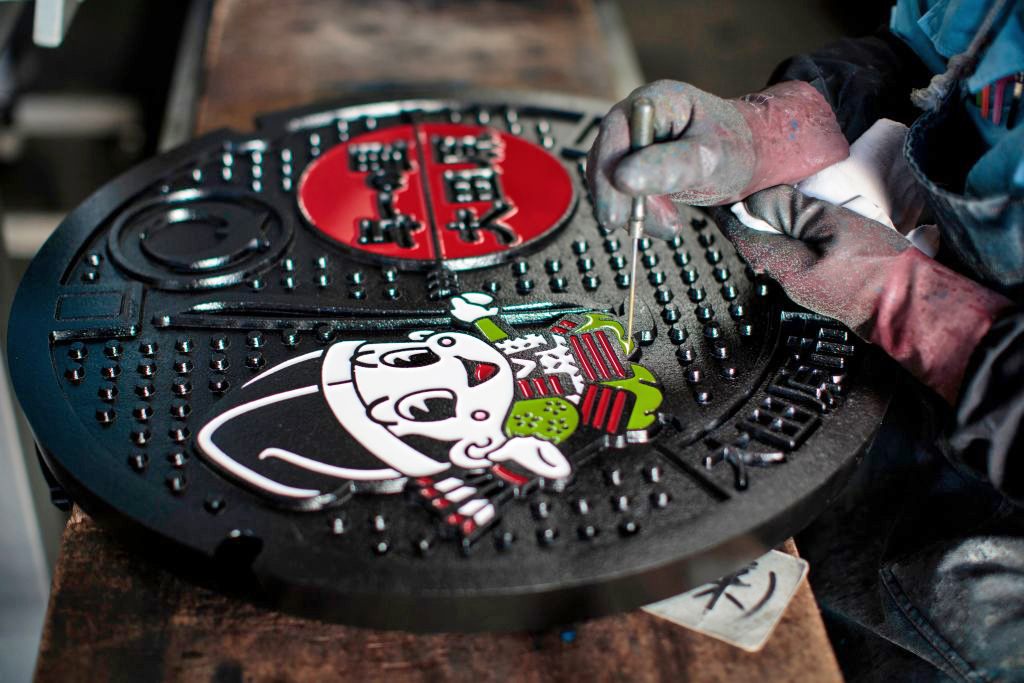 The delicate art of coloring a manhole cover in Otawara, Japan. BEHROUZ MEHRI/AFP/Getty Images
In This Story
Destination Guide

In Japan’s glittering cities, all hustle and light, they can be easy to miss. With all that sensory assault, who thinks to look down and take notice of something as mundane as a manhole cover? But these are no ordinary bits of civic infrastructure. In Japan, many manhole covers are works of urban art—elaborate, curious, distinctive, even colorful. They have become a tourist destination unto themselves, and attract a legion of dedicated manhole enthusiasts who travel the country to visit some of the thousands of unique designs.

Japan’s decorated manhole covers—broadly encompassing storm drain, domestic water supply, electrical and other utility access covers—initially took shape as a public relations campaign for sewers. Beginning in the 1950s, the cast plates featured simple geometric patterns, such as the “Tokyo” and “Nagoya” designs. Japanese civil servant Yasutake Kameda conceived of the intricate, artistic versions in 1985, to help warm a skeptical rural population to the idea of the costly but necessary modernization of the country’s sewer system. From these humble, practical beginnings, manhole covers have become a cultural phenomenon.

While there is some logic to the placement of the covers, particularly those graced with color—usually near a landmark, theme park, or stadium—others appear to have been placed without rhyme or reason. Indeed, it is not unusual to walk down an otherwise unremarkable side street and spot a special one underfoot.

The ornate manhole covers are initially carved from aluminum, which is used to make sand molds for casting. The majority of the designs are selected by local municipalities, in conjunction with manufacturers. In most cases, the design is just imprinted in the cover, but in some cases the covers get another touch—colored resins flooded into voids like enamel on jewelry.

Today an estimated 95 percent of Japan’s 1,718 municipalities, across all 47 prefectures, now host their own unique covers. In Osaka, approximately 10 percent of the city’s 180,000 manhole covers feature ornate designs, of which roughly 1,900 get the color treatment. Typically, a designed manhole cover, which weighs more than 80 pounds, excluding the frame, costs approximately $585—a five percent premium over the cost of a plain cover. The color, however, is applied carefully by hand, and nearly doubles the price of a manhole to more than $900.

Such is the popularity of these little urban treasures that they have a devout, organized following. There is the industry-led Japan Ground Manhole Association, and the fan-based Japanese Society of Manhole Covers, whose website features thousands of photographs submitted by users across Japan, who have snapped everything from large sewer covers to tiny local utility access panels.

One prominent fan is Kei Takebuchi, a popular Tokyo-based singer-songwriter. Takebuchi traces her fascination with them to the covers of Nagoya, which feature a charming cartoon water strider insect, while she was on tour in 2015. Since then, she has regularly tweeted photos of manhole covers to her nearly 200,000 followers on social media. “Every manhole cover design has [a meaning] … it tells me that we can create art with almost anything,” she says, in an interview for this story.

Like many places, Japan is full of people with unusual hobbies or obsessions, but love for the country’s manhole covers has gone mainstream: a “manhole festival” was held near a major train station in Tokyo last month, featuring trading cards, baked goods, and replica covers from around the country. Retailer Tokyu Hands ran an extended campaign at its central Shinjuku location, with a range of manhole cover–related goods for sale.

The affinity for manhole covers also seems to tap in to Japan’s fondness for hobbies that involve lots of domestic travel. Stamp rallies—featuring rubber stamps at train stations and other landmarks—encourage hobbyists to travel to overlooked or lesser-visited locales to add one more stamp to their collections. “Rail-fans” similarly scour the country to document or experience a rare train carriage, an unusual station melody, or other rail-related minutia.

It is the same for manholers, with the occasionally far-flung or seemingly random placement of coveted covers—and directions of varying accuracy—adding to the sense of a scavenger hunt. Indeed, Takebuchi recounts once spending three hours on a bitterly cold day in Kawagoe City in Saitama Prefecture to snap a photo of a particular manhole cover, beautifully designed with an images of Toki no Kane, a historic bell tower. Similar stories are common currency in manholing circles.

Easy to overlook, but curious and rewarding, Japan’s unique manhole covers are a charming reminder that the mundane can be exciting, and that you should never forget to look down.

An Amazing Butterfly Irruption Is Swarming Across California

The "5 pm chime" has taken on many meanings over the years.
art

Can Street Art Be Moved Without Destroying It?

1:37
Sponsored by Explore Asheville
Want to see fewer ads? Become a Member.
From Around the Web
Atlas Obscura Trips
Artisans & Exiles: Exploring the Hidden Traditions of Japan’s Sado Island
View This Trip
Thanks for sharing!