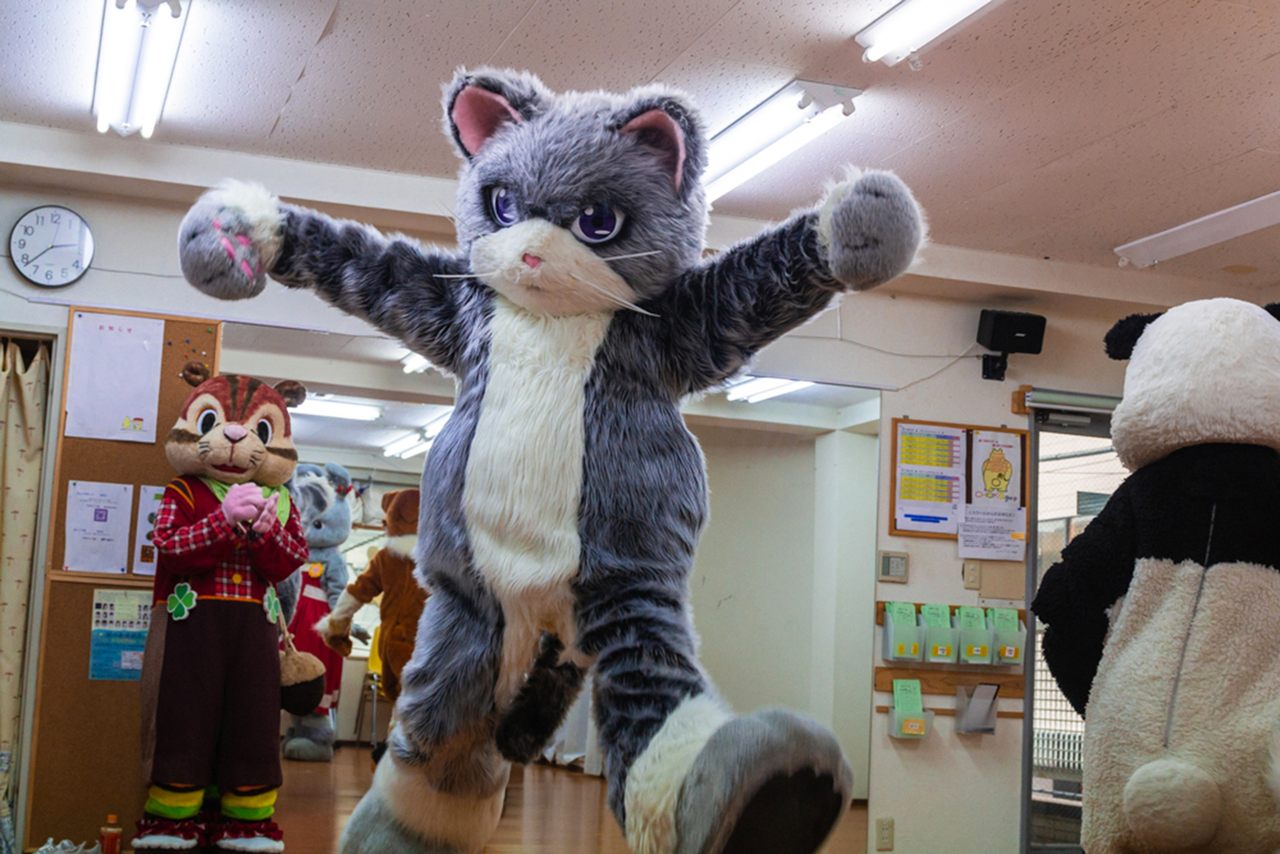 A mascot-in-training jumps for joy. Roberto Solisa
In This Story
Destination Guide

To my right is a grey, frizzy cat. Behind me, a chipmunk wearing a scarf and a lederhosen-esque suit with clovers stands besides a T-shirted gorilla. To the front, a panda and a fox are finishing off their dance routine, about to give way for me and the cat to make our own pirouette entrance. No, I haven’t landed in some alternative version of Lewis Carroll’s Wonderland, I’m participating in a class at Japan’s only mascot prep school.

Choko Group Mascot Actor’s School, the school founded by teacher Choko Ohira in 2005, is located in a small alleyway in the western suburbs of Tokyo. The school is part of the namesake Choko Group, which acts both as a training center for wannabe mascots and those who already have some experience but want to step up their game, and as a talent agency of sorts. Choko Group students are sent out to events ranging from store openings to appearances at zoos, with some going on to become hotshot mascots.

Ohira herself used to be one of them. Part of the children’s program Okaasan to Issho (With Mom), shown on Japan’s national broadcaster NHK, she was in the spotlight as the popular mascot mouse Porori for over a decade. After finishing, she decided she wanted to train the next generation of actors. Some of the class participants mentioned that Choko Group is special because its founder is such a prestigious ex-mascot, one that they remember from their own childhoods or raising their children. For them, it’s akin to attending an acting class taught by a famous actor.

Indeed, mascots, or yurukyara, have a rather strong presence in Japan: everything from cities and companies to prisons and the tax office have one. You’ll find them at city events, participating in rallies, dishing out hugs, donning their signature poses, and promoting whatever they’ve been hired to represent. Photo ops are rife, and it’s not just the kids who end up posing with them—yurukyara are a hit with adults too. There is even an annual Yurukyara Grand Prix, which distributes prizes for the most popular mascot, as well as a World Character Summit.

According to Ohira, the mascot craze only started around the early 2000s. That was when municipalities started actively using mascots as a promotion method, and yurukyara really popped into the public eye. Some of them have reached national star status, such as Kumamoto City’s Kumamon (a very cuddly bear), or Funabashi’s Funassyi (a huge pear, a riff on the city’s name as nashi means pear in Japanese). Others barely reach local legend level.

The boom in mascots was such that the government organized a cull to reduce spending on them in 2015, as municipal budgets were used to create and maintain the yurukyara. In Osaka Prefecture, that meant 20 out of a whopping 92 mascots getting booted out. That said, the boom does not seem to stop. The 2018 Yurukyara Grand Prix had “only” 909 Japan-based mascots hoping for the top prize, versus 1,157 the year prior. For perspective, they’re just the ones who participated, not the total tally of mascots in Japan.

But what drives people to become a professional mascot in the first place? Besides wanting to make people smile—a large reason for many—the answer is as varied as the people who join the class. Today’s chipmunk is a woman with grown-up kids who have left the nest, leaving her with more time on her hands. As a result, she’s picked up several volunteering activities, and is trying to learn sign language. Her main goal is to bring people joy by being a mascot, regardless of who they are. There’s a school close to her house for those with hearing impairments, and she’d like to be a mascot for those kids too.

Then there’s the cat, a guy who makes ends meet as a part-time worker and who would like to end up as a mascot in Disneyland or a similar theme park. The gorilla, a man who is a huge baseball fan, dreams of being a mascot for his hometown team.

The panda, a girl who looks to be in her mid-twenties with braces, is clearly the most driven out of everyone here today. She has a grand plan: rather than wanting to be an existing mascot, she’d prefer to create her own, as ‘“that way you can really own all the steps and its character.” Her ultimate goal? To not just perform in Japan, but abroad as well—preferably in other East Asian countries, as they might be more attuned to mascot culture than the rest of the world.

Her dedication is key, as it’s not a simple matter of prancing around in a costume. Companies might just put their new recruits into a mascot suit without any training, but students at Choko Group adhere to strict rules set by the school. These include never letting anyone see you change or showing skin when in costume. Keeping the fantasy alive of it being a flesh-and-blood character, rather than a human in a suit, is of the utmost importance.

For that same reason, no talking is allowed either, unless the student has progressed to the upper echelons of mascot society as the main actor, or is in a generic costume that isn’t tied to one specific yurukyara. If speaking is required, cuteness is key, no matter the actor’s natural tone of voice. Who can wear which costume is specified by height, not gender, so the chance of a cute animal costumes being worn by a man with a deep voice is just as high as it being a high-pitched woman, and there should be no discrepancy in the level of kawaii (cuteness). Other than that, a sunny disposition and a reasonable level of fitness always help. The costumes can be cumbersome, there’s lots of movement involved, and those movements have to look as upbeat as possible.

During class, the costumes facilitate this. After an intense stretching session, we start learning a short choreographed sequence, still wearing regular workout clothes. It’s quite a happy dance, but although everyone is friendly, it’s clear concentration levels are high. The vibe changes as soon as we put on our costumes. Everyone spends a good 30 minutes changing into their chosen animal outfit supplied by the school, with a dazzling array of panda heads, rabbit feet, cat onesies, and more stacked on the shelves lining the back wall. Once the last chinstrap has been adjusted and strand of hair tucked in, everyone seems twice as cheerful and bubbly, while trying to put their best foot or paw forward. Quite miraculous, considering the costume itself is pretty claustrophobic for the uninitiated.

It’s very hot inside my own bunny-in-a-flowery-dress costume, and I have trouble locating the other students, as I can only see through one of my gauze eyes. Even lifting my feet requires a lot of effort, and I find myself shuffling around rather than being able to show off the feather-light steps I practiced. Luckily, the costumes are all cleaned regularly and sprayed with odor neutralizer before putting them back, but I can imagine this being a full workout in Japan’s summer heat. When I mention this, Ohira laughs. “That’s why events with mascots are usually held indoors in summer, where there’s air conditioning.”

Besides this strong dedication to mascot-dom as a craft and profession, what sets Japan’s mascot culture apart is its popularity regardless of age and gender. According to Ohira, this may have something to do with the country’s approach to physical interactions. “Japan is a society that isn’t big on touch; handshakes and hugs aren’t common, instead we bow, or maybe do a small wave,” she says. “But mascots do [hug]. That might be why not just kids but adults too like mascots, as it’s something they can actually touch and feel, which they usually don’t have. The mascots are very open and hug everyone, including the elderly, in a way that you normally wouldn’t do yourself.”

Considering the mascot’s often anthropomorphic form, that isn’t completely surprising; you’re more likely to want to pet a stray animal than hug someone you don’t know.

“It’s not to say that we constantly walk around thinking that we want to be hugged but don’t do it—rather, we just think not doing it is normal, but when you end up being hugged by a mascot, you do get that fuzzy, happy feeling. Similar to stroking a cat, perhaps.”

That feeling isn’t just limited to bystanders. Before the class, mascots seemed like rather whimsical elements of daily life in Japan. But after having donned a costume, high fives, hugs, and other more physical interactions suddenly feel a lot less out of place than they usually would in a room full of strangers. With the relative lack of these interactions in daily life here, it feels like a breath of fresh air. The social role of mascots—and their popularity—is a lot more apparent now.

But then the costumes come off again, and most of the participants go back to their regular selves, with a wave or a short bow being the preferred way of saying goodbye. What happens as a mascot, stays with the costume. Yet I do detect a small change: everyone, myself included, does seem slightly more cheerful than before.

1:34
Sponsored by Visit St. Pete/Clearwater
Want to see fewer ads? Become a Member.
From Around the Web
Atlas Obscura Trips
Artisans & Exiles: Exploring the Hidden Traditions of Japan’s Sado Island
View This Trip
Thanks for sharing!