The Daily Race to Find Jersey Artifacts Before the Tide Comes In - Atlas Obscura
Want to see fewer ads? Become a Member. 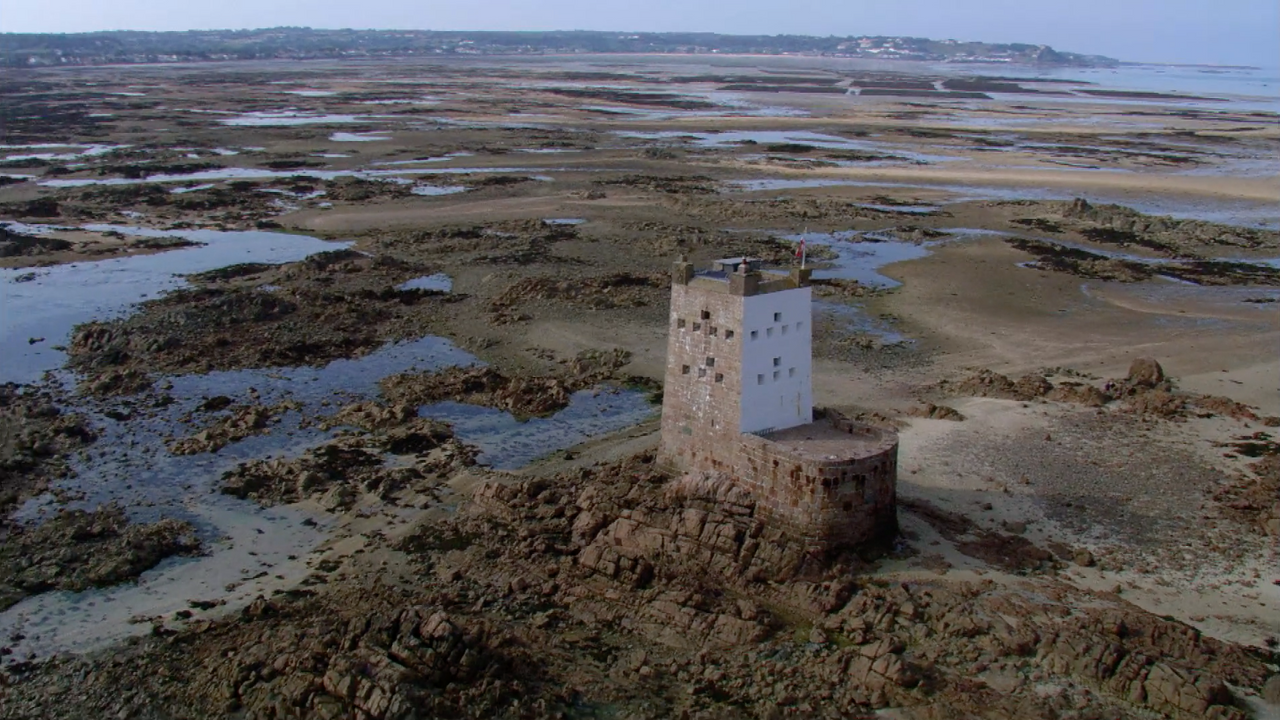 Seymour Tower, where Ice Age archaeologists will stay while searching the shore for tools and artifacts. Courtesy Colonial Films
In This Story
Destination Guide

When the water laps up on the granite rocks and sandy embankments off the coast of Jersey, the largest of the Channel Islands, ancient artifacts get wet. It isn’t a disaster. It’s been happening for thousands of years, in fact, in a daily rhythm—the water rushing in rivulets that turn into torrents along the beachy landscape, sweeping across the miles of exposed seabed and rising above it.

This May, alongside the gulls and crustaceans that skitter about, archaeologists will scamper away from the rising sea as their fieldwork is submerged. They’ll retreat.

With its pockmarked and inundated topography, the intertidal reef known as the Violet Bank is awash with history. Yet despite its name, the bank is a changing gradient of blues, grays, greens, and browns—a cryptic mix of rocky earth and transient sea. Now a preferred spot for low-water fishing—or pêche à pied‚ where locals chat in Jèrriais and probe the ebb tide for shellfish—the evanescent landscape remains treacherous, catching unsuspecting visitors with its rapid tidal shifts.

When an archaeological team from University College London visits the deceptive, disappearing bank in May, they’ll hardly be unsuspecting. They’ll know the tidal drill well, as they try to learn more about the origins of lithic (stone) artifacts and mammoth remains that have emerged from the crevices and ravines that are revealed by the surf with each tide.

The team was tipped off by the Société Jersiaise, Jersey’s learned society, whose members have spent hundreds of hours walking the bank, documenting actual and potential finds. While just a decade ago there was nary an archaeological record for the bank, in the last five years a mammoth tooth, flint tools, and middle Paleolithic technologies have turned up as society members have poked around the coast.

The team from the British mainland will soon haul in an arsenal of equipment to survey the site in greater detail and at a more sweeping scale, hoping to identify more objects that are continually being exposed by the tides. The UCL team is partnering with Jersey Heritage, an organization that manages the many castles, fortifications, and other cultural artifacts of the island—a place that’s been inhabited by humans for millennia. But the team will need to be careful, and quick, as they survey an ever-changing shore.

“Historically the Violet Bank has been a place where it paid to be cautious,” writes Paul Chambers, the marine and coastal manager with the Government of Jersey, a self-governing dependency of the United Kingdom, via email. “The shallow reefs and numerous rocks from which it is formed have claimed many ships and the lives of hundreds, perhaps thousands, of sailors and passengers. This toll includes 400 men from the failed French invasion of 1781 who were shipwrecked while attempting to navigate the Violet Bank.”

Off the coast of Normandy—far closer to France than it is to Britain—Jersey is an island of push and pull. On the northwest coast, the Atlantic slams against the island’s high cliffs. On the southeastern shore, the landscape is shaped by an archipelago of tidepools, sand dunes, and granite escarpments, on a small coastline with one of the fastest tides in the world. The spring tides here—when the difference between the low tide and the full swell of the sea is largest—open just a four-hour window of accessibility. And within that window, there’s only one hour when the tide isn’t moving and the land is still.

“I’ve never been anywhere that feels quite like it,” says Matt Pope, the lead archaeologist on the team. “Except for that hour of slack water, it’s a place constantly in movement. You need to have your wits about [you]. [T]he water is flowing through these gullies, and it’s like you’re walking through a landscape of rivers, amid the boulders and bubbling.”

It “creates an odd kind of working day,” he adds. “You’re constrained by this rhythm that’s non-negotiable.”

Before it began to be claimed by the sea around six millennia ago, the Violet Bank was easily traversable. The region was not part of Doggerland—the now-submerged Ice Age landscape that linked Britain with continental Europe—but was contiguous with that landmass, though rockier and more erosive. Pope and his team have begun to affectionately refer to “their Doggerland” as La Manche Land—a nod to the French word for the English Channel on which, and under which, the Violet Bank sits.

When the Holocene period began, the bank was characterized by distinctive gulches and ridges—topographical traits that are now apparent only at low tide. Neanderthals had certainly been eking out an existence elsewhere on Jersey, though their possible presence on the Violet Bank has not been scrutinized. But some form of human ancestor—maybe Neanderthal, maybe not—left hunting tools there, which were found in recent years by the Société Jersiaise. With Jersey’s rich record of Neanderthal habitation, the combination of the found remains and the topography—which may have been conducive to stalking elk and mammoths—make the thought of the Violet Bank as a Neanderthal hunting ground not altogether far-fetched.

“As far as we know, in Northern Europe, the only people that used these [tools] were Neanderthal populations,” Pope says. “We now have no more than 20 of these artifacts, but they’ve been found casually.”

Pope’s upcoming work will include a survey of the exposed bank using a combination of boots-on-the-ground archaeology and fast-moving, state-of-the-art drones that can identify objects with hawk-like vision. That’s the way archaeology is often practiced today in places that aren’t well understood: looking first, digging second.

“The drone captures it all … and then you can decode what you’re seeing in a week,” Pope says. “Having an eye in the sky for intertidal work makes mapping a lot easier.”

The team’s survey will be the first archaeological work at scale on a site that has seen centuries of shipwrecked sailors and attempted conquests. During World War II, German soldiers were swept away by the unpredictable currents that rise up amongst the granite. Later, the Violet Bank itself nearly became a victim.

“That such fieldwork is possible [today] is a stroke of providence,” Chambers writes. “The biological, archaeological, and cultural wonders of the Violet Bank were nearly lost to science when, during the 1980s, it was suggested that an airport be built on the seashore there.” Thankfully it didn’t come to pass.

Pope says that the prehistoric lithic and mammoth remains found so far may have gotten wedged into fissures of submerged granite—a “resilient rock that’s not going anywhere anytime soon”—preventing them from being washed out to sea. Once wedged, clay may have sealed off the bits and pieces, which slowly dislodged over millennia.

“The preservation of an archaeological site in a coastal environment is particularly fortunate, especially when the material is particularly fragile,” says Jérémy Duveau, a paleoanthropologist at the Museum of Mankind in Paris who works on a Neanderthal-footprint site near Le Rozel, France, and is not affiliated with the upcoming surveys on the Violet Bank. “Indeed, the … action of the wind can be particularly destructive, as can that of the tide, as is the case for many sites located on the coast.”

Preserved along with the bank and the bits found among its bouldery clutter is an 18th-century fortification called Seymour Tower, built on a rocky tidal island—more of a large rock than a small island—that’s completely surrounded by the sea at high tide. It’s where Pope’s archaeological team will stay when they’re not working on the exposed bank during the four-hour window.

“It’s owned by Jersey Heritage, and they’ve kitted it out as a bunkhouse. It’s got solar power, it has nice beds, a nice kitchen,” Pope says. “All human waste needs to be transported back to the mainland, though, so that’s a logistical problem.”

Sitting high in a tower is a great way to escape the sea, though, and will provide a retreat for the archaeological team during the long stretches of higher tide that render the bank inundated and inexplorable.

The fieldwork—equal parts medieval, modern, and marine—may also uncover aspects of Jersey’s hitherto unknown history on the Violet Bank. The human materials that have been discovered to date have been found across the island. But no one until the Société Jersiaise team came along bothered to look in the semi-surf just offshore.

Though always changing—ebbing and flowing, rinsing and repeating—the bank is scheduled for a tectonic shift. As with all land, especially islands, Jersey is vulnerable to rising seas, something that climate change all but guarantees for the shifting shoreline.

“These are places that are vanishing,” says Pope. “We had the initial Holocene submergence after the last Ice Age, and now we’re experiencing a second phase of sea level rise which will inundate these last accessible areas of intertidal landscape as we enter the Anthropocene era. For us, it’s a chance [to document] these last bits of landscape before they go … [this] human evolutionary story that’s going to be lost forever.”

When the archaeological team ventures out onto the bank, says Pope, the drone work will hopefully lead to an exacting topographical map of the bank and pinpoint any archaeological matter that turns up. For vested Jerseyans like Chambers, that’s certainly the aspiration.

“It is hoped that as well as being known for its marine life, moon-like seascape, and coastal fortifications, the Violet Bank will [soon] be regarded as an area of great archaeological interest.”

The Black Taxidermist Who Made History at Chicago's Field Museum

Researchers scramble to find and study everyday items preserved for millennia and now at risk.
islands

All you need is a dream, investors with deep pockets, and concrete. A lot of concrete.
volcanoes