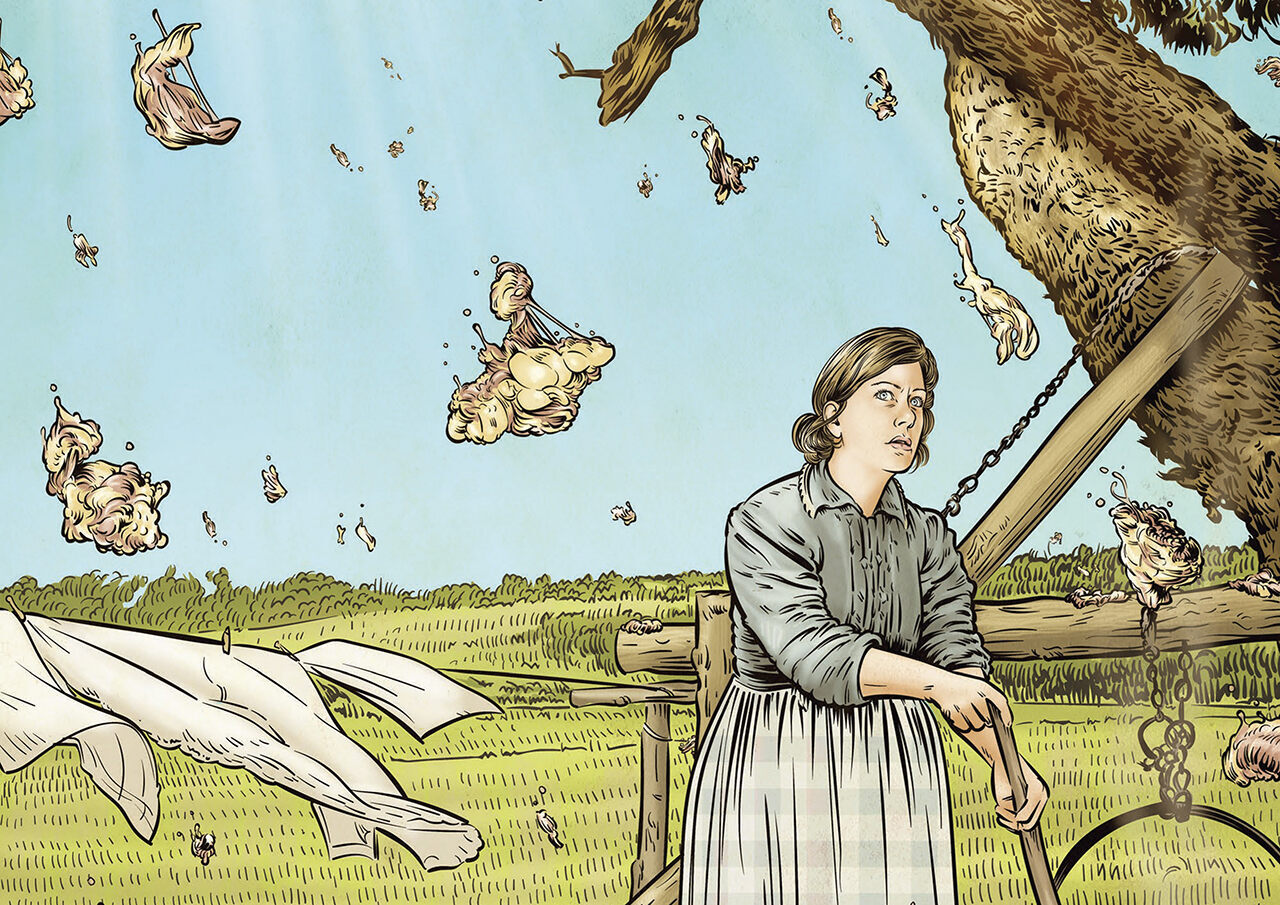 The meat shower, here shown falling on Mrs. Crouch, caused confusion across the nation. Reprinted from THE UNITED STATES OF ABSURDITY ©2017, published by Ten Speed Press. Illustration by James Fosdike.
In This Story
Destination Guide

Every October, around 200,000 people gather in Kentucky for Court Days, the largest outdoor event in the state. Ever since 1794, locals have bought, traded, or sold various goods at the festival, held in the city of Mount Sterling. But in one of the strangest offerings in Court Days history, Kurt Gohde, professor of art at Transylvania University, handed out meat-flavored jelly beans in 2007 to anyone who would eat them.

Some people said the flavor of the dark red jelly beans reminded them of raw bacon. Another pair agreed with each other that they tasted like “strawberry pork chop.” Gohde, who commissioned the jelly beans with their specific flavor profile, describes them as tasting like “a heavily sugared bacon, with a metal aftertaste.”

The jelly beans were flavored like the 1876 meat shower, a mysterious event where chunks of flesh rained down over nearby Olympia Springs, one early March day. Gohde had hoped that meat connoisseurs at Court Days might help him determine the true identity of the mysterious substance.

Gohde, likely the foremost expert on meat rain, first learned about the incident in a book about strange weather phenomena more than 20 years ago. He had just moved to Kentucky from upstate New York, and was keen on asking his students more details about the unusual event. To his surprise, none of them knew what he was talking about.

Gohde, an artist often drawn to the strange and obscure, was fascinated by the meat shower. “I have a tremendous appetite for wonder,” he says. “I believe people need wonder in their lives. I know I do.” Eager to learn more, he trawled Google Books, old newspaper clippings, and research papers for mentions of the incident.

One article, dated March 9, 1876, and reprinted the next day in the New York Times, described a Mrs. Crouch who was in her yard making soap when flecks of meat began to fall down around her. “The sky was perfectly clear at the time, and she said it felt like large snowflakes,” read the article. “One piece fell near her which was three or four inches square.” Two men that tasted the raw meat thought that it might be mutton or venison, and the Crouch family cat gorged on the fortuitous feast.

Theories regarding the origin of the meat shower abounded. One early idea was that the meat was actually nostoc, a type of bacteria that swells to look like a clump of seaweed when exposed to moisture. However, lab tests confirmed the meat shower was actually bits of muscle, lung, and cartilage, dashing that idea.

Another disconcertingly violent theory Gohde discovered proposed that two brothers had gotten into a knife fight, and a twister picked up the gory carnage and deposited it over the residents of Olympia Springs.

Gohde’s favorite theory, however, is one proposed by humorist William Livingston Alden. “The obvious conclusion is that the Kentucky shower of meat was really a meteoric shower,” wrote Alden in a New York Times article published on March 11, 1876. The article explains that since “meteoric stones” constantly revolve around the sun, it would also stand to reason that “there revolves about the sun a belt of venison, mutton, and other meats, divided into small fragments which are precipitated about the earth.”

Alden continues to explain that previously, scientists had theorized that meteors were the result of exploded planets, so the meat shower must be “inhabitants who formerly occupied the wrecked planet”—essentially, that the meat was exploded alien livestock.

The article even goes so far as to suggest that scientists needed finer technology so that they would be able to predict meat rain like the weather. The writer indulges in a full Cloudy with a Chance of Meatballs fantasy, writing that “light showers of beefsteak may be looked for in the New England and Middle States during the morning, followed by a heavy rain of mutton in the afternoon.”

But a definitive explanation of the meat shower never reached the residents of Olympia Springs. “In 1876, the idea of solving every riddle just didn’t exist yet, so people were largely okay with a relatively plausible solution. And then they would just move on,” says Gohde.

But Gohde didn’t. Fascinated with the meat shower to begin with, a serendipitous find in 2004 stoked his ardor even further. He was clearing out storage closets at Transylvania University when he stumbled upon an old glass jar sealed with a cork stopper. It contained a chunk of white, fatty-looking meat, suspended in a pale yellow liquid. The label was faded, but the words Olympia Springs could still be made out. Gohde was thrilled.

Determined to try and pinpoint what mystery animal rained down over Olympia Springs, Gohde worked with a colleague in the biology department to have the sample genetically tested. Unfortunately, the sample was too old and contaminated to give any conclusive results.

Then Gohde got creative. Much of his artwork involves community engagement, so he had a taste lab based in Cincinnati analyze flavor compounds of the meat sample and reconstruct the taste in a jelly bean. Gohde wanted to educate local Kentuckians about the curious climatic event, and if anything, jelly beans would be a great conversation starter.

“I was fascinated with the idea that people would just eat it and then declare what it tasted like,” he says.

Gohde drove to Cincinnati and picked up more than a thousand of the meat shower jelly beans, packed in small metal tins. Gohde waited till he got home to try them. Parked in his driveway, he popped one in his mouth.

“The taste, frankly, is so vile,” Gohde says with a chuckle. “I remember thinking it was really strong. The first one I ate tasted like chemicals and sugar.”

Accounts from 1876 described the meat shower as tasting like mutton, although Gohde thinks the jelly beans lack the distinct muttony flavor. He thought the Kentucky Court Days would be a good place to talk to locals and gather opinions on what the meat could be. Feedback varied, but ultimately Gohde didn’t arrive at a definitive consensus.

Alas, Gohde found the most likely explanation for the meat shower—and its contents—in articles published in Louisville Medical News and The American Journal of Microscopy in 1876. Several scientists believed that the meat shower was a result of vomiting vultures, a theory first proposed by an unnamed Ohio farmer.

Kentucky is home to turkey vultures that gorge themselves on carrion, limiting their ability to fly. If spooked, the birds need to immediately take flight, and lighten their load by regurgitating their last meal. As it turns out, the unlucky Mrs. Crouch was likely rained on by a buzzard barf blizzard.

One of the articles also posits that it’s possible that the vultures feasted on sheep treated with strychnine, a poison used to target coyotes. The vultures may have vomited in response to feeding on poisoned meat.

Now, Gohde wants to take his fascination with the meat shower even further. He’s in the early stages of conceptualizing a collaborative community art project that would recreate the events of March 3, 1876, by dropping meat from the sky over Olympia Springs. He hopes that by sharing the story of the meat shower through his art, more Kentuckians will take interest in this strange chapter of state history.

As for his jelly beans, he still has a few tins tucked away at his studio. No one has ever wanted to try them twice.

An art museum found a very old toilet—right under where its new bathroom was being built.
meatmysteryfoodhistory
Keep Exploring
food

The reasons were both religious and practical.
food

Trade wars, papal rebellion, or salty hams. Why does central Italian bread have no salt?
food

The 'Pie Engineer' Who Designed a Dessert For the Jazz Age

Kentucky's melt-in-your-mouth treats date back to the 1800s.
Gastro Obscura

The sweet, spiraled pastries were once a staple on cold days in the American South.
Gastro Obscura

In the American South, some believe it deters rain on one's wedding day.
Related