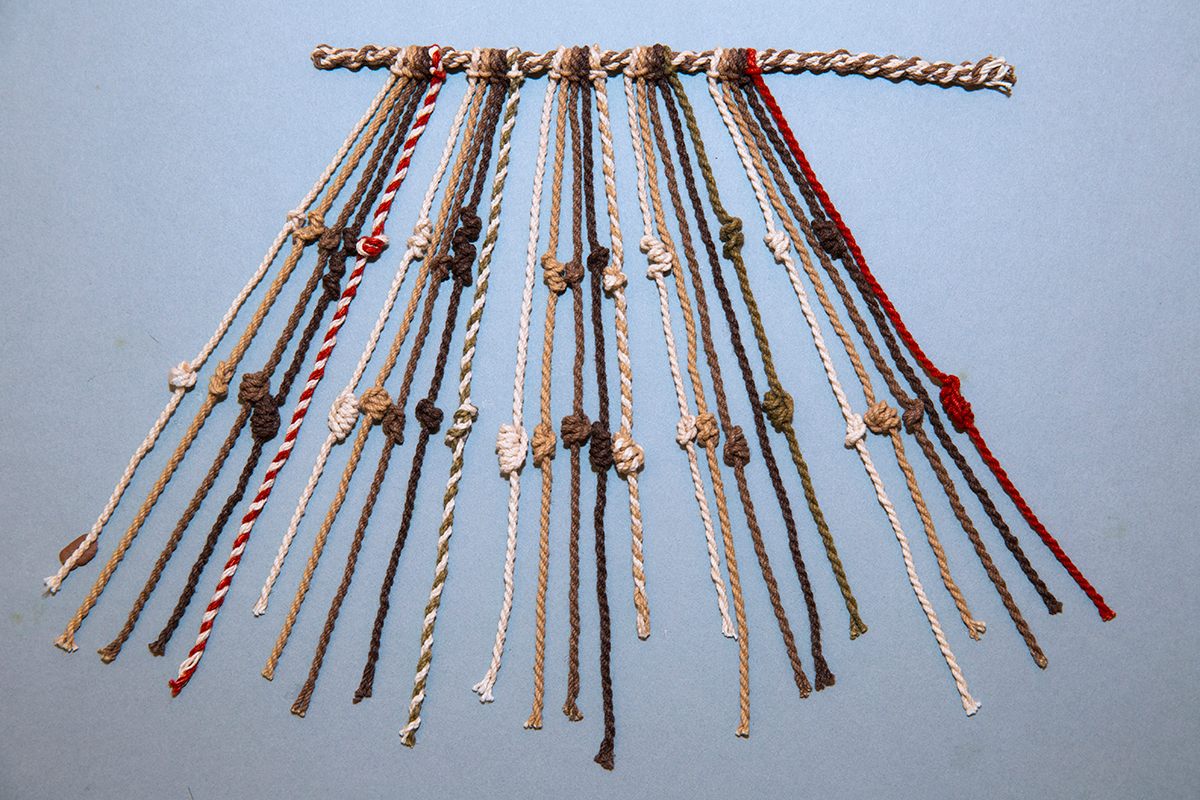 A model of khipu knots, representative of many khipus from pre- and post-Conquest Peru Jon Chase/ President and Fellows of Harvard College

There are many ways a college student might spend spring break. Making an archaeological breakthrough is not usually one of them. In his first year at Harvard, Manny Medrano did just that.

“There’s something in me, I can’t explain where it came from, but I love the idea of digging around and trying to find secrets hidden from the past,” Medrano says.

With the help of his professor, Gary Urton, a scholar of Pre-Columbian studies, Medrano interpreted a set of six khipus, knotted cords used for record keeping in the Inca Empire. By matching the khipus to a colonial-era Spanish census document, Medrano and Urton uncovered the meaning of the cords in greater detail than ever before. Their findings could contribute to a better understanding of daily life in the Andean civilization.

The Inca Empire reached its height of power in 15th- and 16th-century Peru. When Spanish conquistadors invaded, the Inca had established the largest and most complex society in the Americas. Architectural marvels from the civilization, such as Machu Picchu, survive to this day, but the Inca left behind no written records.

“The only sources we have at present are chronicles of the Inca that were written by the Spaniards,” Urton says.* “We know in a lot of cases those histories were skewed by Spanish beliefs and Spanish motivations, and so we don’t really have any indigenous Inca history.”

The only records the Inca are known to have kept are in the form of intricately knotted khipu textiles. In 2002, Urton began Harvard’s Khipu Database Project. He traveled to museums and private collections around the world to record the numbers of knots, lengths of cords, colors of fibers, and other distinguishing details about every Inca khipu he could find—more than 900 in total.

Urton says he and other researchers in the field have always had a general sense of what the khipus represented. Many, they could tell, had to do with census data. Others appeared to be registers of goods or calendar systems. But, until recently, none of the khipus Urton studied could be understood on a very detailed level. If the khipus held messages or cultural information beyond just numbers, the meanings were opaque to modern scholars.

A turning point came when Urton began looking into a set of six khipus from the 17th-century Santa River Valley region of Northwest Peru. One day, Urton picked up a book and happened to spot a Spanish census document from the same region and time period.

“A lot of the numbers that were recorded in that census record matched those six khipus exactly,” Urton says.

It was an exciting enough coincidence that Urton mentioned it to his undergraduate students at the end of class in the spring of 2016. For Medrano, who was sitting in the lecture hall that day, it was too enticing of a lead to ignore.

“I walked up to him and said, ‘hey, spring break is coming up, if you need someone to put a few hours into this, I’d be happy to take a look,’” Medrano recalls.

Medrano, now a 21-year-old junior, was a freshman at the time. He is majoring in economics, but had always found archaeology interesting and had enrolled in Urton’s course on the Inca civilization, curious to study a period of history about which he knew little.

Urton agreed to allow Medrano to look into the Santa Valley khipus and the Spanish census. “[I wasn’t] thinking he’d ever do much with it because I’d had one or two other people look at it before and nobody could ever come up with anything,” Urton says.

The khipus in question are in a private collection in Peru, so Medrano worked from information Urton had recorded in his khipu database. Medrano recalls combing through spreadsheets in Microsoft Excel, graphing some of the data, and enjoying the hunt for patterns.

“I have a love of puzzles, just for entertainment. I love to do a Sudoku on a plane or something, but this is so much more profound,” he says.

Medrano comes from a Mexican-American family and speaks Spanish, so understanding the Spanish census document was no problem. Handling numbers and data came naturally to him as well, as an economics major. The challenge, as both Medrano and Urton note, seemed to demand a perfect alignment of his skills and interests.

“Not every archaeology project operates in Excel,” Medrano points out.

Medrano noticed that the way each cord was tied onto the khipu seemed to correspond to the social status of the 132 people recorded in the census document. The colors of the strings also appeared to be related to the people’s first names. The correlations seemed too strong to be a coincidence. After spring break, Medrano told his professor about his theories.

“I just remember being pretty excited, that, ‘Wow! I think the guy’s got it,’” Urton says. “There were a couple of things that didn’t add up and I’d point that out and he’d take it back and work on it for a week or two and come back and he would have understood something about it at a deeper level.”

Medrano worked with Urton over the next several months and the two compiled their findings into a paper which will be published in the peer-reviewed journal Ethnohistory in January. Medrano is the first author on the paper, indicating he contributed the bulk of the research, something Urton notes is extremely rare for an undergraduate student.

Sabine Hyland researches Andean anthropology at the University of St. Andrews. She has read Medrano and Urton’s forthcoming paper and describes their discoveries as “thrilling.”

“Manny has proven that the way in which pendant cords are tied to the top cord indicates which social group an individual belonged to. This is the first time anyone has shown that and it’s a big deal,” Hyland says.

Urton is now optimistic that the six khipus examined in the research could serve as a key to decode the hundreds of others he has in his database. The colors of the cords as they relate to first names could hint at the meanings of colors in other khipus, for example.

“There’s a lot we can draw on from this one case,” Urton says.

But what’s most exciting to Urton and Medrano is the potential to better understand Inca history from the indigenous point of view. As Medrano puts it, “history has been written from the perspective of the conquerors and to reverse that hierarchy is what I see this project as doing.”

Vending Machines in the U.S. Once Dispensed More Than Chips and Cookies

Join us for a daily celebration of the world’s most wondrous, unexpected, even strange places.
lakes

The centuries-old offering was nestled inside an underwater stone box.
landscapes

The Gunditjmara have been building an eel-farming system at the Budj Bim Cultural Landscape for more than 6,000 years.
bars

It holds a semi-secret message of opposition to the king.
Video • Wonder From Home