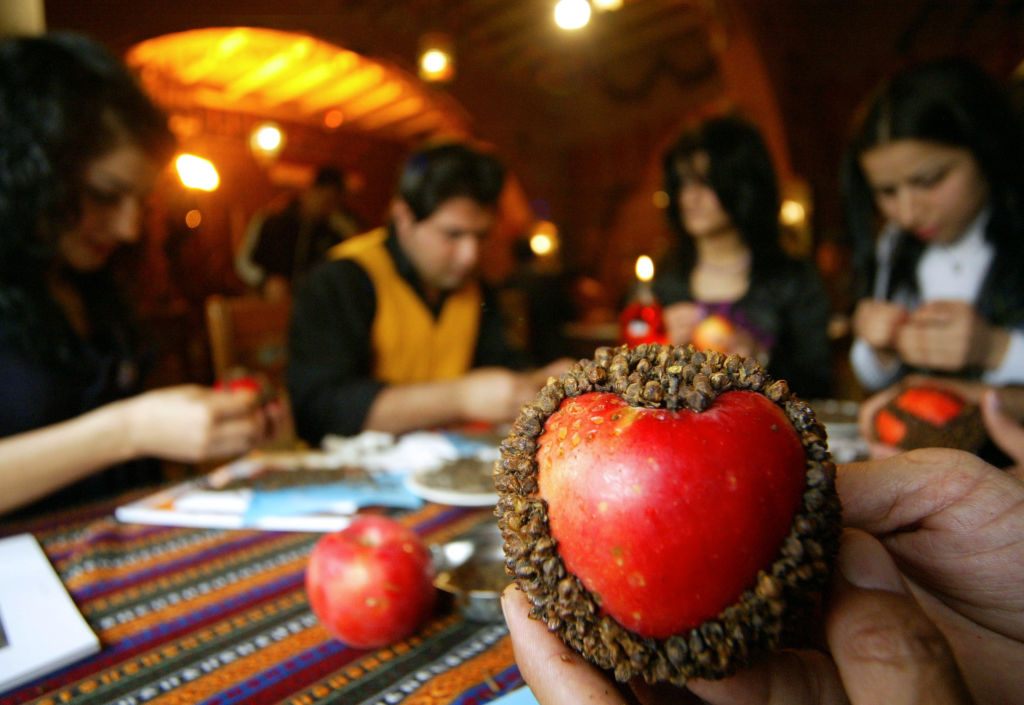 “One is the apple eaten by Adam and Eve that resulted in their expulsion from paradise,” he explains. “The second is Newton’s apple, which fell on his head resulting in the discovery of the law of gravity. The third apple belongs to Steve Jobs, the most famous inedible apple known to man.”

Saedian, an Iranian Kurdish artist, is on a mission to add one more apple to that list: Sêva mêxekrêj, or the Kurdish clove apple. Pierced with a layer of cloves, with only glimpses of the fruit underneath, these fragrant apples are used to express only the deepest of feelings, from love to grief.

Clove apples are a Kurdish tradition with a murky past. Tradition holds that the practice of making these spice-preserved apples has existed for hundreds of years across Kurdistan, a region that spans parts of modern Turkey, Iran, Iraq, and Syria. “The history of the clove apple exists in the form of tales, legends, and folk literature, or in different musical forms,” notes Saedian, rather than official records. This, he speculates, was due to religious and cultural strictures against expressing romantic feelings outside of marriage.

But still, young lovers once spent hours piercing dozens of sharp-ended cloves into apples. Generally, it was young Kurdish girls that often opted to profess their feelings this way, when they found it difficult to express themselves verbally. Once the apple was entirely covered with cloves, it was left to dry for several weeks. The maker then gifted the dried clove apple to their beloved. The apples can last as a memento of devotion for decades, imbuing them with immense meaning.

But with its sparse written history and modernity edging out old traditions, the 20th century saw sêva mêxekrêj on the verge of becoming obsolete. That’s why for the last 15 years, Saedian has been working on a project to revive and globalize this ancient Kurdish tradition.

According to folklore, such apples could also serve as peace offerings. “The first time I really saw this apple was in 1999. I was at home, packing for a trip when I found a clove apple in my rucksack,” says Saedian. “I hesitated to even touch it.” Confused, he called his older brother, who also had no idea how this mysterious fruit had appeared in his bag.

Then he noticed his mother standing at his bedroom door, with tears in her eyes. “A few days before this incident, my mother and I had a disagreement about something rather puerile, and we were no longer on talking terms,” Saedian remembers. “Hoping to resolve the tension between us ahead of my trip, my mother had placed the clove apple in my rucksack—somewhere I wouldn’t fail to notice it.” It was after this incident that Saedian decided to revive the Kurdish clove apple tradition.

In 2005, Saedian set up his first serious art project about the clove apple. “It was a conceptual art project where I took 10 tons of soil to an old prison in Sulaimaniya [Iraqi Kurdistan] and made a burial site out of that soil, because many Kurds had been killed in this prison,” he explains. The project, The First Sin, consisted of 12 graves with ghostly white hands bursting from the soil, many holding a clove-covered apple.

Since then, every year on February 14, the project has been exhibited in several countries, including Iran, Iraq, Turkey, Belgium and England. Saedian also holds workshops, showing participants how to make their own clove apples and instructing them to give them to their loved ones.

The Kurdish clove apple, in recent years, has found new significance as a way to remember the victims of tragedy. In particular, they have become a symbol of the Halabja massacre and the Anfal campaign of 1988 and 1989. The apple symbolises the sweet, fruity smell of the poison gas used by Iraqi government forces to kill 5,000 people in the city of Halabja, while the cloves represent life and hope. In 2010, the government of Iraq declared February 14 as the National Clove Day in remembrance of the victims.

Saedian believes that, given its beauty and simplicity, the revival of the clove apple tradition as a symbol of love and peace is inevitable. And indeed, after witnessing its increasing popularity, the Ministry of Tourism of the Kurdistan Regional Government declared it the first official Kurdish symbol in 2013. While it might take the clove apple a while longer to become the fourth-most known apple in the world, the ancient tradition has once again become part of the Kurdish language of love.

How to appreciate ice without getting all that cold, with the Atlas Obscura Places Team.
relics

Her name was Enheduanna.
music

Join us for a daily celebration of the world’s most wondrous, unexpected, even strange places.
More Food & Drink
Meybod, Iran

Ancient structures used to make and preserve ice in the deserts of Persia.
Genoa, Nevada