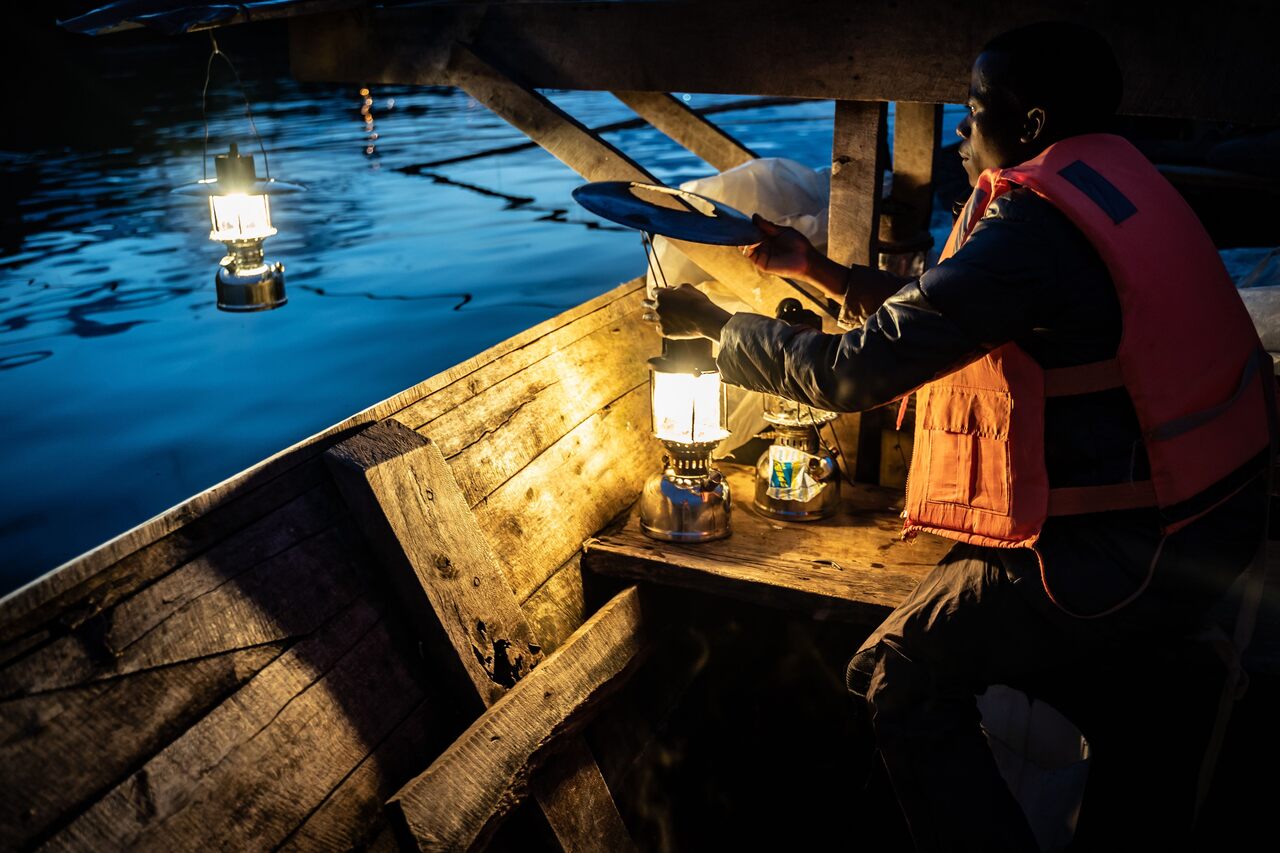 A fisherman lights lanterns on Lake Kivu in 2019. SIMON WOHLFAHRT/AFP via Getty Images
In This Story
Destination Guide

A few minutes before sunset on an overcast November evening, a group of fishermen emerge from the green terraced hills of Kibuye, Rwanda, get in their boats, and paddle towards the center of Lake Kivu, an idyllic lake shared by Rwanda and the Democratic Republic of Congo. While rowing, they sing. Not in Kinyarwanda, Swahili, Lingala, or French, the region’s common languages, but in Amashi, a little-used language almost forgotten by Rwanda and Congo.

It’s a duet: splashing water mixes with the soft hums of Amashi. But then the fishermen quiet while readying nets to catch the nimble sambaza (a small fish similar in taste to tilapia, but resembling a sardine). Instead of fishing rods, the captain hangs bright, bobbing lanterns to draw the fish. Racing against the setting sun, he blows on each and fans them with his hands to keep them lit. Across Lake Kivu, hundreds of captains are lighting similar gas lanterns. From Kibuye, one of the country’s largest lakeside towns, the winking lights are an expected, and beautiful, sight each night.

As the last lantern is lit and the nets set, the sun dips low and the fishermen relax. They have several hours until it is time to pull the nets—the first pull of several they will make tonight. So they crack jokes and check their phones for WhatsApp messages. Some sing softly in Amashi, the language that practically marks them as fishermen.

“I learned Amashi from my friends and family,” Nelson Habimana, 28, a local fisherman turned tour guide, told me before I set off for the night. “My father knows Amashi, and my grandfather knows Amashi. They were both fishermen.”

It’s not just songs, either. On and off the boat, fishermen and their families communicate in Amashi, or a mix of Amashi and Kinyarwanda, Rwanda’s national language. Theophile Kikumi, the oldest fisherman on the boat at age 49, was born on Nkombo Island in Rwanda’s Rusizi district. “Everyone is a fisherman on the island,” he says, “and everyone on the island speaks Amashi. It’s not taught or used in school—that’s Kinyarwanda. You learn Amashi from your family.”

Amashi is spoken by the fishermen who launch from the Congo side of Lake Kivu, too. “It’s the language of all fishermen on Lake Kivu,” Habimana says. So much so that outsiders who join the profession need to learn the lingo. The boat’s owner, Jacques Benimana, says he doesn’t speak the language. But he sings in Amashi “because all the other fishermen do,” and uses it to talk about the nets and daily tasks. “If you are a fisherman,” he says, “you need to know a little Amashi.”

After a few hours, it’s time to check the nets. The men work quickly, running between their three pirogue-like boats, which are attached by long eucalyptus rods that the men cross like balance beams. When everyone is in position, Benimana calls for them to pull, and small silver fish materialize from the water. As they slowly haul the net and shift the bulk of the catch to the center boat, they communicate, of course, in Amashi.

The most popular of Amashi’s anecdotal origin stories is that the language came about as a result of wedlock. According to oral histories, Rwandans marooned pregnant-but-unmarried women on Lake Kivu’s islands as punishment for “their condition.” When Congolese fishermen discovered these women, they married them and adopted their Rwandan children. Thus, Kinyarwanda blended with a few Eastern Congolese dialects, creating the Amashi language that fishermen continue to speak and sing.

Nsanzabaganwa laughs when I ask him about the wedlock story. “It’s partly true,” he says. But more likely, according to Nsanzabaganwa, is simply that Rwanda and the Democratic Republic of Congo’s shared borders led to shared languages. He says that Amashi is a language from the Abashi people of Eastern Congo, and has historically been located around Bukavu, a bustling Congolese city on the southern tip of Lake Kivu that borders Rwanda.

“Kinyarwanda and Amashi are cross-border languages, and several million [people] speak Amashi today,” says Nsanzabaganwa. “People had an uncle on one side [of the border], or an aunt on the other, and the language passed back and forth.”

Dr. Joseph Rusanganwa, a professor in modern languages at the University of Rwanda, agrees with Nsanzabaganwa about Amashi’s origin in the DRC. But even in Bukavu, Amashi is no longer the predominant language. Amashi, says Nsanzabaganwa, is largely reserved for fishermen, and the families of fishermen. “Fishing is a historically Congolese profession, and that helped introduce the language to Rwanda.”

But, he adds, the language now spoken by fishermen is rarely “pure Amashi.” It changes from north to south depending on how close different lakeside towns are to Congo or Rusizi. “It’s a Kinyarwanda-Amashi hybrid,” he says.

In Rwanda, the country is uniting linguistically around Kinyarwanda, which more than 93 percent of the population speaks. Concerned about Amashi’s potential disappearance, Nsanzabaganwa and his colleagues have recorded Amasare, or work songs of the fishermen. Other Rwandan professions have similar work songs, such as beekeepers’ Amavuvu. But only Amasare are sung in a distinct language.

For the fishermen, it just feels natural. “It’s our language,” says Kikumi. “It’s the one that was made for us.” They use it most when paddling out, singing in unison as they set up. A different member of the crew leads each night, favoring their treasured melodies, some of which incorporate intricate harmonies and whistles. Although the lyrics change, “be mighty” features frequently, as does “may God watch over us.” Some songs include exultations of God, and prayers for family and fish. When a fishermen slowly starts to sing, everyone quickly joins in. The songs end fast and upbeat, as all crew members repeat the same, (apparently) easy to learn, new lyrics and tune.

“We sing in Amashi to give us strength,” says Kikumi. “So we can be strong on the job.”

Underneath the surface, Lake Kivu is in slow turmoil. Approximately 60 billion cubic meters of methane and 300 billion cubic meters of carbon dioxide fill the lake. The product of nearby volcanoes and decomposing organic material, the gases could be deadly. In 1986, a “limnic eruption” in Cameroon’s similarly composed Lake Nyos released carbon dioxide into the air, which suffocated 1,700 people and countless animals.

Rwanda is trying to turn the situation into an economic opportunity. The country is working on gas-extraction plans that could transform the methane into 960 megawatts of electricity-generating capacity, which, according to the MIT Technology Review, is more than six times what the country has now.

The fishermen say the gas doesn’t affect them yet, but, according to Habimana, “It’s why we can’t get big fish in the lake.” While nearby Lake Tanganyika has more than 400 kinds of fish, and others are similarly plentiful, Lake Kivu has just 28. As fishermen on our boat sort the haul into buckets, there is very little variety in the catch, and I think about how fishing Lake Kivu might be more rewarding if there were bigger fish to fry. Kikumi tells me, and the other men on the boat agree, that they work 24 days a month, from sundown to sunup, to make around 600 Rwandan Francs, or 64 cents, per day.

Later, after an orange sky gives way to deep blue, a thunderstorm rolls in. The men on the boat scramble to secure the nets, and we spend the next few hours huddled under tarps, pressing our legs against the wet wood as the boat shakes in the waves. Benimana, the boat’s owner, stretches out next to me, securing his head underneath the makeshift shelter, and promptly falls asleep. On my other side, the men play games on their phone or softly hum.

As the rain subsides, Benimana wakes up and plays a Kinyarwanda song from his phone about a husband whose wife is dying. In the song, the husband tells his beloved to give away all her possessions and humbly prepare for the afterlife.

Surprisingly, it has a very upbeat melody.

I ask why we aren’t listening to songs in Amashi, and the fishermen sitting next to me laugh. “Eh,” says Benimana. “Because we also like Kinyarwanda.”

An underground musical tradition is under threat again.
music

Three elderly women are teaching the music of these famed fisherwomen.
music

The Rise and Fall of North Carolina's National Hollerin' Contest

Hollers are sort of like the yodels of the American South.
food

The Rwandan condiment is so spicy, it's served with eyedroppers.
Gastro Obscura

Across East Africa, these cardamom-flavored doughnuts are the perfect pairing for chai.
Gastro Obscura

With only nine master fishermen left, a centuries-old tradition is at risk.
Read more
Thanks for sharing!