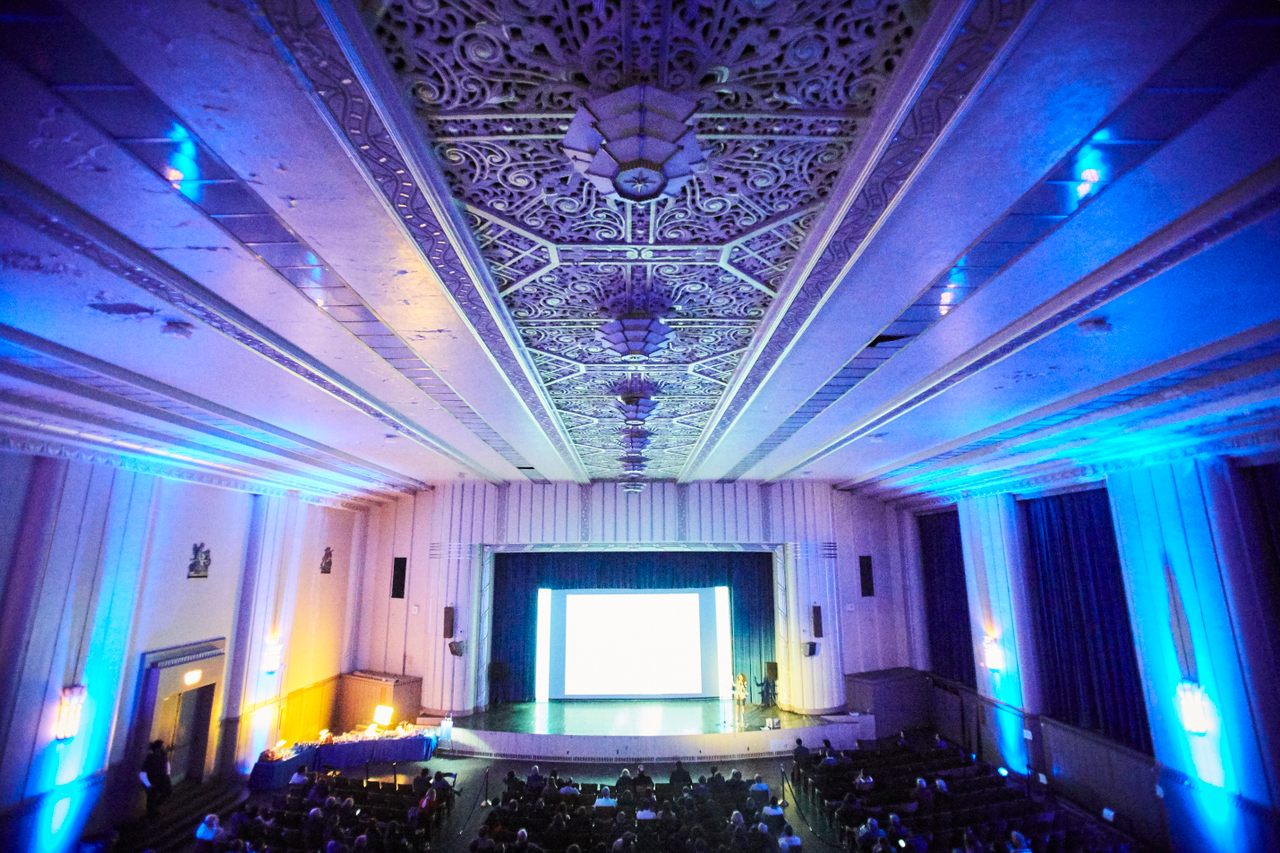 Chase Sapphire® cardmembers filled the historic Bok auditorium. Slated for restoration, this event was one of the last in its current state. All images by Dave Londres

Spending a weeknight stuck in school might not sound like everyone’s idea of fun, but those caught wandering the halls of the Edward W. Bok Technical High School building on November 29 certainly weren’t there for detention. Instead, guests of Atlas Obscura and Chase Sapphire were there for Assembly: Underground Films and Philly Legends, a one-of-a-kind screening event that celebrated Philadelphia’s underground art and unsung heroes.

The Bok building, a towering, Art Deco gem, was originally built by the WPA in 1935 as a vocational high school. Closed by the School District of Philadelphia in 2013, Bok is now a 350,000 square foot community space, whose goal is to provide creative facilities, learning opportunities, and career tools to residents of the neighborhood and beyond. Its classrooms have been revitalized and reimagined into art studios, boxing gyms, and fabrication shops, as well as a hidden restaurant with gorgeous city views on the top floor.

On November 29, the building’s historic gymnasium and massive 700-seat auditorium were transformed into immersive event spaces, where guests were treated to an evening of programming inspired by the building’s mission and the neighborhood’s story.

Before the programming even got started, press, local influencers, and Chase Sapphire cardmembers mingled with the presenters in the pre-event lounge. The space, formerly the boy’s gymnasium, was transformed into a glowing, reactive light installation by building residents Klip Collective. DJ Skeme Richards complemented the light show with an eclectic playlist of 7-inches, mixing hip hop, funk and soul. Plush furniture, glimmering streamers, and a premium open bar evoked a moody, filmic prom night and further reinforced the feeling that school really was out forever.

Guests made their way from the gym, into the auditorium, and past blue velvet ropes for a full program of fascinating, Philly-centric presentations. Speakers were given the mic throughout the evening, and the opportunity to talk about topics dear to them.

Film Location Scout Nick Carr could be considered the ultimate explorer. Every day, he searches for places near, far, and in between to stage the perfect scene. He talked about the city’s starring role in films such as Rocky and Twelve Monkeys. Veering more toward the avant-garde, Secret Cinema founder Jay Schwartz projected a surrealist 1960s film from the auditorium’s second story balcony.

Brendan Lowry, the creator of the popular Instagram account Peopledelphia, spoke about the power of emerging media to shift perspectives on a place. Program Director of Girls Rock Philly Samantha Rise’s jubilant keynote celebrated the mother of rock ‘n’ roll–and daughter of Philadelphia–Sister Rosetta Tharpe. “We tried to think of different ways to represent the past, the present, and the future… all engaging with the space and the city as a whole,” said John Pettit, Head of Atlas Obscura Society Philadelphia.

Schools are structures designed to transform those who pass through their doors, and film is a medium designed to catch and preserve transformational moments. It’s fitting then, that the Bok building, a neighborhood space in the process of transition, acted as a venue for this kind of event experience. Just by their attendance, guests helped to redefine the purpose of the space, all the while opening their minds to stories captured from their community. Get a glimpse of more of these moments below: