The Crack Squad of Librarians Who Track Down Half-Forgotten Books - Atlas Obscura
Want to see fewer ads? Become a Member. 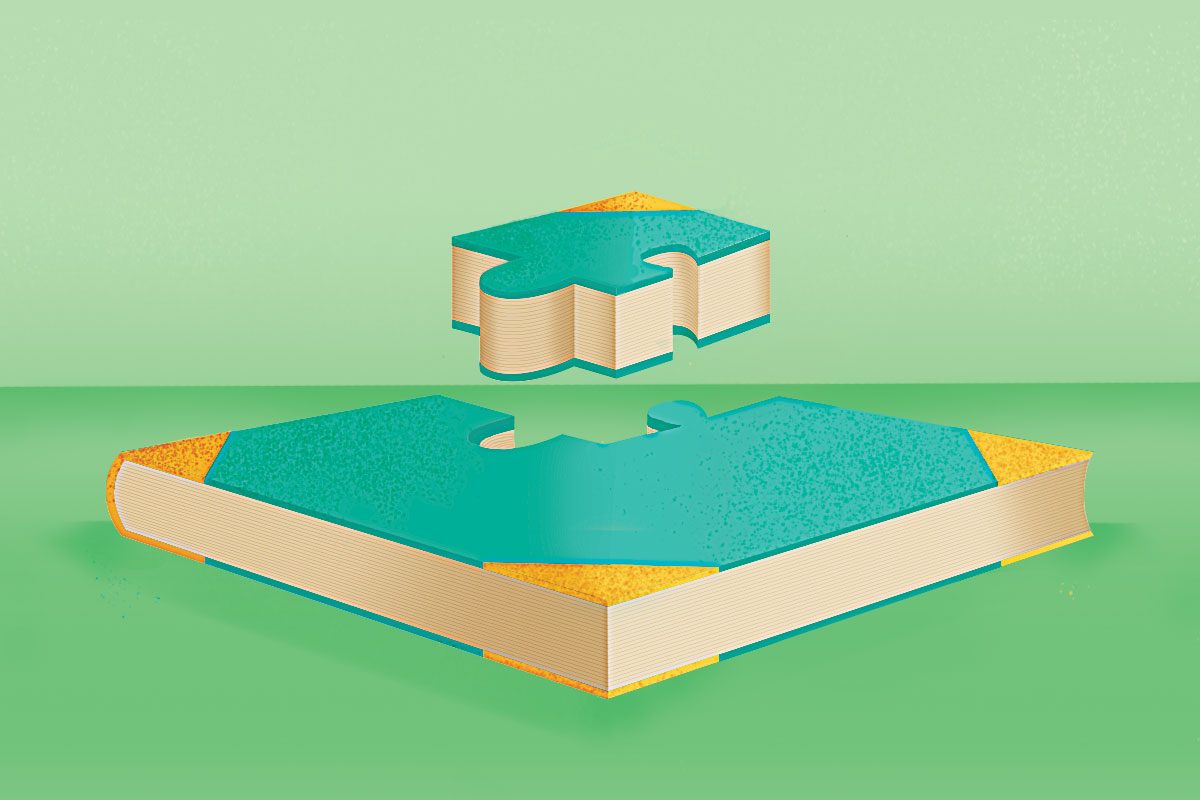 I remember there was a person in it and they did something ... Illustration: Aïda Amer
In This Story
Destination Guide

The carpet was khaki, the lights yellow, the walls a dishwater beige. The basement computer lab in Midtown Manhattan didn’t have much ambience. But 20 librarians from the New York Public Library were seated in the room—and they were there to crack mysteries. Their tools were a whiteboard, a marker, a series of screens, and a metal bell of the sort you’d find on a hotel-lobby desk. Whenever it dinged, it meant a case had been closed.

Before we each had a little, flickering encyclopedia in our hands, we had librarians, and they’re still experts at finding the answers to tricky questions. Through the Ask NYPL portal, a decades-old phone and text service, the staff has triaged everything from queries about the Pope’s sex life to what it means if you dream about being chased by elephants. The library staff are ace researchers with a massive trove at their fingertips. A sense of mystery in their work comes when people approach them with vague questions and patchy details—particularly when they’re looking for books, but they don’t remember the authors or titles.

A few years ago, staffers in the New York Public Library’s reader services division drafted a blog post about how to track down a book when its title eludes you. This post spurred a follow-up, in which reader services librarian Gwen Glazer recommended library resources and a number of other strategies (among them are Goodreads groups, a sprawling Reddit thread called whatsthatbook, an indie bookseller in Ohio who is happy to poke around for a $4 fee). Thanks to Google—“how to find a book”—many stumped people seem to land on that post, and they have often written about their enduring puzzles in the comments section. The messages now number in the thousands. Glazer says she often arrives at work to see another 10 title requests.

To solve these little mysteries, Glazer recently assembled a team of sleuths from across the branches: Chatham Square, in Chinatown; the Jefferson Market, in Greenwich Village; the Andrew Heiskell Braille and Talking Book Library, near the Flatiron Building; and the Mulberry Street branch, in Nolita. At lunchtime on a recent Wednesday, they were gathered in that computer lab in the library’s offices—across the street from the soaring, spectacular Stephen A. Schwarzman Building (the Main Branch)—to nibble on homemade lemon rosemary cookies and apple, carrot, zucchini bread while they clattered away on their keyboards. Other members of the team participated remotely. The “Title Quest” hackathon was underway.

Glazer encouraged some folks to start at the earliest comments and work their way back; others started with newer ones. Readers wanted help with all sorts of books. A story about a dragon that enlists a young girl as his apprentice, and also happens to be a cheesemonger. One about a kid named Wurm (“Spelled with a ‘u’ and not an ‘o,’” the commenter added), who makes a computer game in his college dorm room. Or one about mistaken identity, love gone wrong, and torrid affairs and unhappy marriages, set around 1900. (This one piqued other commenters’ interest: “I have no idea what the name of this book is, but if someone replies with the correct answer could you plz email it to me as it sounds like something I’d really like to read,” read a reply. “Was it good?”)

The first case was cracked in just a few minutes, courtesy of a remote staffer who recognized the plot of Imbolo Mbue’s 2017 Behold the Dreamers. The room filled with a smattering of applause and enthusiastic dinging of the hotel bell. Someone made a hash mark on the dry-erase board. The staffers were in the zone, quietly murmuring to themselves. “There are a lot of murder mysteries about very wealthy relatives,” one person muttered, scrolling through a list. “Serial killers …” another trailed off. Then, the room fell pretty quiet again, until the next ring of the bell.

Glazer and company looked for proper names, locations, keywords, and other leads. There’s a database where you can search by cover keywords, but it’s not always useful, since cover designs change over time and editions. Also, readers’ recollections aren’t always reliable in the first place. “You have to know that at least one detail someone is certain about is not right,” said Stephanie Anderson, assistant director of selection and ordering. Searching databases can also be a bit of art, said Rhonda Evans, an electronic resources librarian at the Schwarzman Building, because the metadata of a database entry is inputted manually and can be somewhat subjective, informed by the person who enters it, and their era and location. In one database, for example, searching for “integration” will return a different list than you’d get if you looked for “desegregation.” “Words we think mean the same thing can pull up totally different results,” Evans says.

Glazer was chasing the story with “Wurm.” The post was full of surprising and helpful details—the commenter thought that there was something to do with sand? Glazer started searching NoveList (a database available for in-library use), but nothing looked quite right—a lot of fantasy novels and picture books. “This is where librarians get librarian-y,” Glazer said. She tightened the search, checking boxes for “teen” and “fiction,” but still came up empty handed. “Now I’m just going to straight Google,” she said. She landed on a Reddit page and drew in a breath. “Oh! I think we might have gotten it.” She read on. “This looks like it.” It was The Gadget Factor, a 1985 young adult novel by Sandy Landsman.

Throughout the afternoon, the staff tracked down 48 titles, but they weren’t always positive that they’d nailed it. Lynn Lobash, manager of reader services, sometimes wound up “85 percent sure,” she said. She hoped that that would be enough to reunite someone with a long-lost book they couldn’t wait to revisit.

Ireland's Coast Has Giant, Hidden Signs Telling Pilots Where They Are

When a sledgehammer isn't really an option.
food

This California collection is a trove of wine books and rarities.
mystery

A scholar of Aegean civilization considers the inscrutable meaning of the artifact—and its irresistible appeal.
libraries

5:19
Want to see fewer ads? Become a Member.
From Around the Web
THE GASTRO OBSCURA BOOK
Taste the World!
An eye-opening journey through the history, culture, and places of the culinary world. Order Now