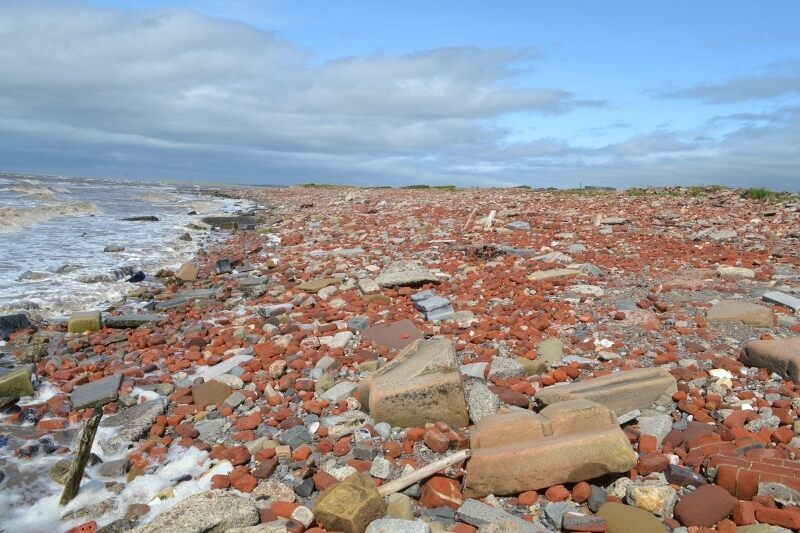 The Blitz remains at Crosby Beach extend over more than a mile of coastline. Courtesy Lancashire at War
In This Story
Place

Much of what constituted mid-century Liverpool now litters a beach outside of town.
Destination Guide

Emma Marsh didn’t discover Crosby Beach for herself, even though it is right outside of her native Liverpool, until she left town. She was studying archaeology at the University of Durham in 2018 when she got a call from her family urging her to investigate what they stumbled across while walking the dog. They had encountered a long stretch of beach covered in historical, pulverized bricks, mortar, marble, tilework, and more, from granular to gargantuan in scale, covering every grain of sand in a pavement of red, white, and beige architectural bric-a-brac.

The rubble wasn’t exactly a secret; it had been discovered countless times before by locals and visitors, but Crosby Beach has never been officially recognized for what it is—archaeologically valuable wreckage from World War II. Marsh is trying to change that.

“I’ve really never seen anything like it. There are some pieces that are absolutely massive pieces of stone,” says Marsh, who is completing her undergraduate dissertation on the Crosby Beach rubble. “I really want there to be signs put up at the beach. If you don’t know what the rubble is before you go there, you won’t know.”

If things were dumped on Crosby Beach before England went to war in 1939, they’ve long since been buried under tons of wreckage from the bloodiest conflict in human history. Besides London, Liverpool was one of the cities hardest hit by the German Luftwaffe.

“Liverpool was a target because of its importance as a port. Nearly 3,900 are killed,” says Charlotte Wildman, a historian of modern Britain at the University of Manchester. “As a child growing up in Merseyside during the 1980s, there were bombsites and bits left over from the Blitz everywhere!”

The barrages came throughout the war, with the worst of it in 1941. Businesses, homes, and thousands of lives were destroyed indiscriminately. All of this destruction left behind a lot of rubble in British cities, and something had to be done with it. Tons of the rubble were shipped off to other countries during the war as ballast on ships delivering weapons and supplies. (Some of it became landfill that helped Manhattan expand its East Side.) But German barrages kept replenishing the stock of cluttered stone.

“Basically, where the rubble went is still a bit of a mystery,” says Peter Larkham, a planning historian at Birmingham City University. “In Berlin there were ‘rubble mountains’ around the edge of the western sector that I saw still in 1988.”

In Britain as in Germany, many tons were simply dumped on the outskirts of towns. And perhaps nowhere is evidence of the Blitz as visible, overwhelming, and extensive as on Crosby Beach, which is about five miles from the center of town. It’s not certain when the material was schlepped to Crosby Beach, but it accumulated, and then, when the war ended, was promptly forgotten. “Liverpool never had a comprehensive reconstruction plan,” says Catherine Flinn, an urban and architectural historian and author of Rebuilding Britain’s Blitzed Cities: Hopeful Dreams, Stark Realities. “Everybody had to submit plans, but Liverpool’s was really focused on traffic circulation and redesigning streets rather than reconfiguring where business were, or where City Hall was.”

Without buildings as a focus of the Liverpudlian reconstruction efforts, the rubble has languished, its edges softening with every tide. Some curious souls wander among what used to be Liverpool, according David Lewis, a writer and Liverpool native who wrote about the rubble in his The War Memorial in the Sea. “Visitors pick over the site, but most are unaware of the history,” he says. “It’s not a very attractive place. To the unknowing eye it looks like a few hundred meters of illegally dumped builders’ rubble!”

Marsh is casting a knowing eye on the historical wreckage. Whenever she is back at home from university, she is at Crosby, where she has been documenting the shapes and sizes of what she sees. The first challenge is distinguishing the World War II rubble from additional dumping that took place in the 1970s. The second is being safe, as there are asbestos-laced building materials from the early 20th century. When Marsh finds interesting or distinctive pieces—elaborate masonry, old-timey lettering, or anything that offers a compelling clue—she uses photogrammetry to document the objects in 3-D. Then she tweets out her finds, crowdsourcing tips from Liverpudlians with a strong sense of history or urban knowledge. By cross-referencing that information with her own research, she is starting to rebuild prewar Liverpool, bit by bit.

“It’s history that’s quite important to people,” Marsh says. “People mention grandparents and the like. There’s that human connection.”

So far, Marsh has had luck with fragments that are uniquely ornamented or incised. Time and tide have not made matters easier, and add a sense of urgency to her work. “It’s a matter of years until they’re all eroded,” she says. While many red bricks are little more than red herrings, one undistinguishable from the next, Marsh has had her fair share of successes.

“One of the big ones I found—that I thought was really kind of shocking—was a gravestone,” she says. “I tracked that back to who the people were using census records. I found the church it was from, which was bombed, and used as a warehouse post-Blitz.”

The problem is that it’s unlikely she’ll be able to find or identify other pieces of the church unless they’re as distinctively marked—the dumping was just as indiscriminate as the bombing, after all. But that doesn’t detract from the nature of the puzzle, not when so many pieces are sitting right there, waiting to be put back together—enough for a lifetime of work for an intrepid young archaeologist with a nose for history.

“You can understand what Liverpool was like during the war,” she says. “Just in pieces.”

These Girl Scouts Save Wild Bees, One Homemade 'Hotel' at a Time

The five-day fever was made famous during World War I, but has been a constant companion of poor hygiene.
archaeology

In German cities, it means alerts, traffic, evacuations, and at least a little anxiety.
ghost towns

The particles have covered nearby beaches, unnoticed, for nearly 75 years.
Video • AO Docs

1:26
Want to see fewer ads? Become a Member.
From Around the Web
Travel With Atlas Obscura
Are you a curious traveler?
Join local experts in 50+ destinations for a once-in-a-lifetime journey.
View Our Trips
Thanks for sharing!