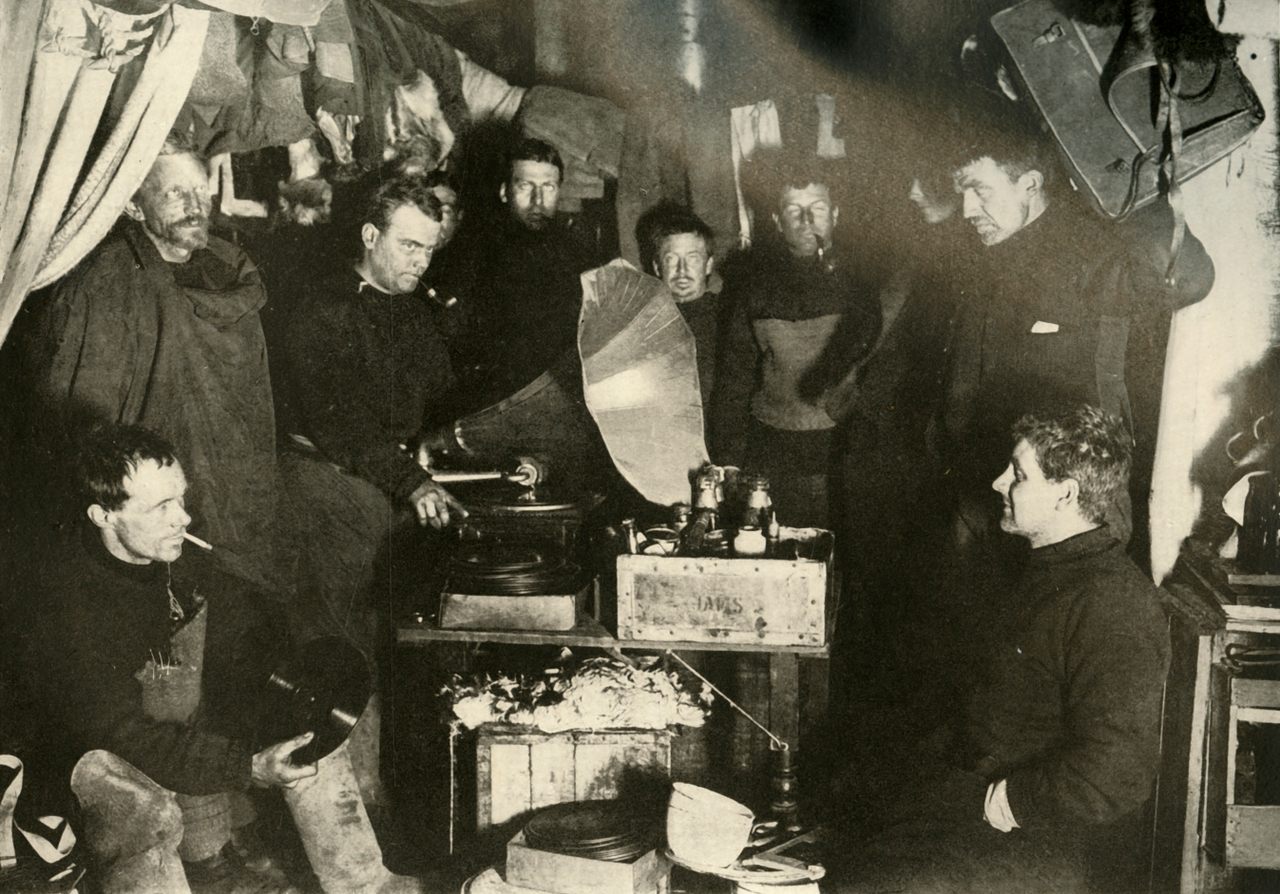 This article is republished from The Conversation under a Creative Commons license.

American pioneer Richard Byrd explained, “little things … have the power to drive even the most disciplined … to the edge of insanity. The ones who survive with a measure of happiness are those who can live profoundly off their intellectual resources, as hibernating animals live off their fat.”

How did the Antarctic explorers of the early 1900s survive tedium in the time long before the internet?

Music was vital to the sanity and welfare of the explorers. “It is necessary to be cut off from civilization … to realize fully the power music has to recall the past…to soothe the present and give hope for the future,” said one of the youngest members of the Terra Nova Expedition (1910-1913).

The Scottish National Antarctic Expedition (1902-04) included an official bagpiper. Admiral Byrd brought a phonograph to the Advance Base in 1934, calling music his “only real luxury.” When abandoning the slowly sinking ship Endurance, Ernest Shackleton’s men were allowed to carry only two pounds of personal effects. But Shackleton insisted that meteorologist Leonard Hussey take his six-pound banjo along, saying, “It’s vital mental medicine, and we shall need it.”

Books played an huge role in the lives of polar explorers. The library aboard Endurance included plays, poetry, books on exploration, the Encyclopedia Britannica and novels like The Brothers Karamazov. When the ship went down, Shackleton rescued a Rudyard Kipling poem. He tore the first page out of a Bible given to him by Queen Alexandra, abandoning the rest of the heavy text, though a crew member secretly saved it.

Poetry, one explorer explained, “was useful, because it gave one something to learn by heart and repeat during the blank hour … when the idle mind is all too apt to think … of purely imaginary grievances.”

Some men even attempted to learn a language. Roald Amundsen, the leader of the Norwegian Fram Expedition (1910-1914), studied Russian grammar. While others quickly finished their lighter stories, Amundsen’s reading “had the advantage of being incomparably stiffer. Russian verbs are uncommonly difficult of digestion, and not to be swallowed in a hurry.”

Daily diaries were extremely common among polar explorers. First, men were aware accounts of their experiences could have monetary value in the future. Second, diaries served as records and keepsakes for their families. Third, as many days tended to run together, diaries became a way to differentiate one day from another. Finally, as one explorer explained, “A diary in this life is one of the only ways in which a man can blow off steam.”

There is a long tradition of polar explorers creating newspapers for themselves. Reports on the weather or accounts of visits to penguin colonies were interspersed with short stories, poetry, interviews, crossword puzzles and word games. They were illustrated with both humorous and artistic drawings. Over time, these texts took on a great deal of sexual content, including lewd jokes and fantasies.

As one explorer explained, “The importance of not allowing any sense of depression to become a part of the atmosphere of our life was clear to all.”

Carsten Borchgrevink, the leader of the Southern Cross Expedition (1898-1900) said, “The sameness of those cold, dark nights attacks the minds of men like a sneaking evil spirit. We found that … playing chess and cards were very valuable pastimes.” Sometimes men “shouted and jumped during their game and it is a wonder they did not upset the little board on which they played.”

Chess was also king on the Terra Nova Expedition (1910-1913). According to Robert Falcon Scott, “Our most popular game for evening recreation is chess; so many players have developed that our two sets of chessmen are inadequate.”

For Antarctic explorers, almost all food was dried or consumed from tins. Hoosh, a stew made from a mix of dried meat and fat, called pemmican, thickened with cereal, provided many of the calories of the earliest expeditions.

To break up the monotonous cuisine, men experimented with new foods, such as penguin or seal meat. In a few cases, such as the Fram expedition and the Imperial Trans-Antarctic expedition, they even ate their dogs.

The often lackluster fare meant the men were often obsessed with food. Many of their conversations revolved around their ideal meals from home. In 1934, Byrd wrote in his diary, “I found the cook book! … The whoop of joy I uttered sounded so loud that I was actually embarrassed. … No book washed ashore to a castaway could have been more avidly studied.”

There was debate over the value of alcohol on these expeditions—no one wanted to encourage drunkenness and alcohol could be dangerous in the field. But Amundsen, the first man to the South Pole, felt differently: “An occasional glass of wine or a tot of spirits were things that we all, without exception, were very glad of. … Personally, I regard alcohol, used in moderation, as a medicine in the Polar regions. … Two men who have fallen out a little in the course of the week are reconciled at once by the scent of rum.”

So what kind of man survived the best under severe isolation? According to Apsley Cherry-Garrard of the Terra Nova Expedition (1910-1913), “The men with the greatest store of nervous energy came best through this expedition … their strength of mind triumphed over their weakness of body. If you want a good polar traveler, get a man without too much muscle … and let his mind be on wires—of steel.”

Daniella McCahey is an assistant professor of history at Texas Tech University.

More than a year into the pandemic, scientists are seeing the impact of disposable gloves and masks on ecosystems.
holiday

It's not quite curtains for the "panto" tradition.
dolphins

Researchers are hoping to use the opportunity to get a better handle on their language.
Video • Wonder From Home