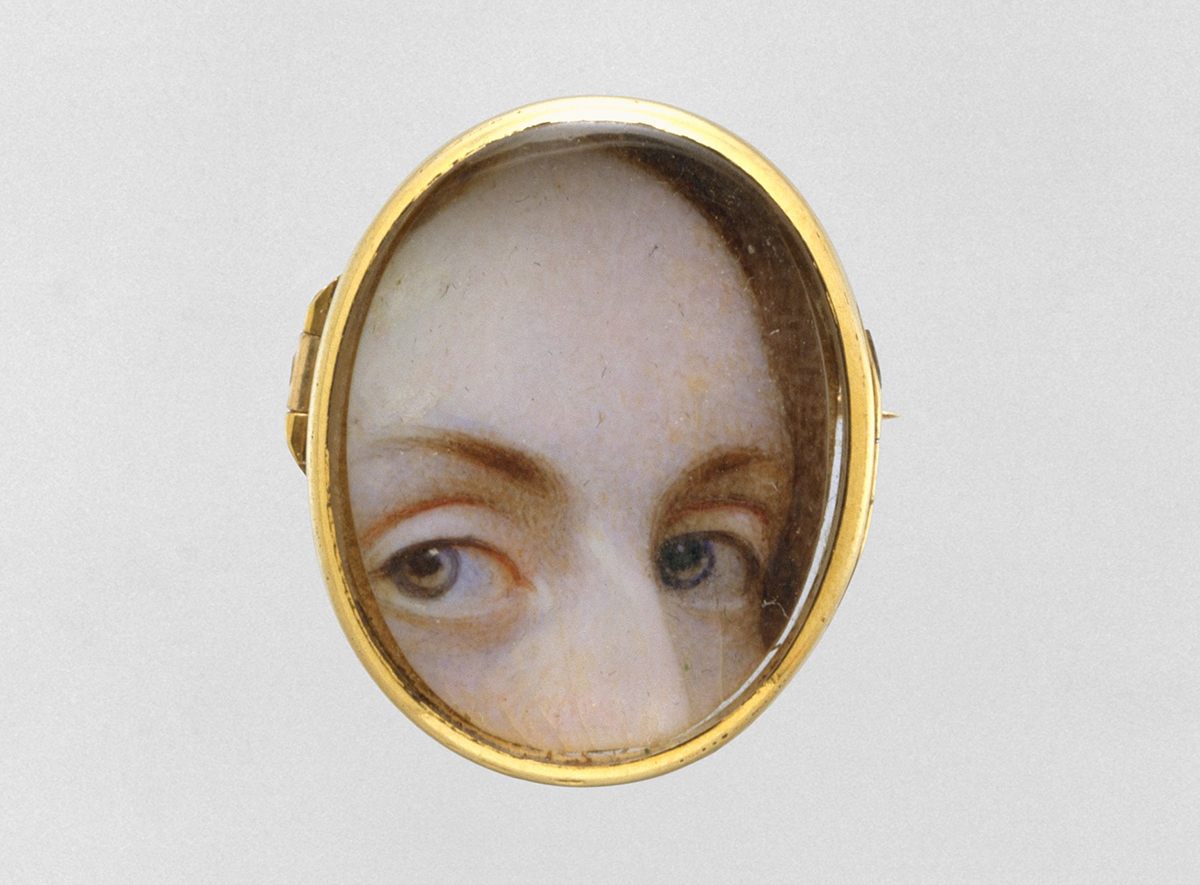 A miniature watercolor on ivory from c. 1840. Metropolitan Museum of Art/ Public Domain

What would have been sexier for early 19th-century British nobles than having a passionate affair? Flirting with their lover right in front of everyone. How? By wearing one of the most intimate parts of their beloved—the eyes—all over their body.

Eye miniatures, also known as lover’s eyes, were a subgenre of jewelry that became the height of fashion in the Georgian era. For centuries, tiny personal portraits of one’s beloved had been common adornments, but depictions of that person’s eyes alone were something pretty new. Although eye miniatures were first spotted around the time of the French Revolution, they became very popular across the Channel around the same time, due to one particular royal trendsetter.

That fashion-forward fellow was the Prince of Wales, the future George IV and eldest son of King George III of American Revolution fame. In contrast to the moral rectitude of his famously faithful father, George Jr. collected true loves like other men did horses. His most infamous affair started in the early 1780s, when the prince fell head-over-heels for married Catholic Maria Fitzherbert.

The 1701 Act of Settlement forbade British royals, especially the future head of the Church of England, from wedding Catholics. Despite her eminent unsuitability, George wooed Maria with endless affection, a faked suicide attempt, and quite a few gifts. He also commissioned British miniaturist Richard Cosway to paint a portrait of his eye, which the prince mailed to her, along with a marriage proposal.

Maria eventually made her lover a portrait of her own eyes. The two were wed soon after, which was illegal; George III eventually forced them apart and made his son marry a German princess. Although the match with Maria was ill-fated, the Prince of Wales started an imitable fashion for eye miniatures, also known as “lover’s eyes.” Only about a thousand of these exist today. All were produced between the 1780s and 1830s, in America, Western Europe, and Russia.

Affluent individuals would wear these trinkets on every appendage, from finger rings to brooches and pendants. These lovers’ gifts, often set on plaques of ivory, were discreet. Presumably, only the wearer and the portrait subject would know the identity of the beloved being depicted, keeping the experience intimate. And the places people would wear them—on the wrist, near the heart—created a “tactile connection between the owner’s body that mirrored the emotional closeness between subject and wearer,” as art historian Jennifer Horn noted in The Power of Objects in Eighteenth-Century British America.

It can be difficult for modern art historians to identify the subject of small portraits. After all, you can only see eyes, eyebrows, and maybe a bit of hair.

If you were particularly close to a relative, you might even get a lover’s eye made of a beloved family member. One 18th-century example featured a brown eye beneath some clouds; the gaze in question belonged to Margaret Wardlaw, who died at the age of nine.

Other pieces were surrounded by pearls, symbols of tears and indicating that the subject passed away. One such example appears in the collection of Dr. David Skier and his wife, Nan. In 2012, they loaned their collection of lover’s eyes—numbering over 100, among the largest worldwide—to the Birmingham Museum of Art in Alabama. Although this exhibit has since closed, you can still get your fill of lover’s eyes around the northeast United States, at the Metropolitan Museum in New York, the Philadelphia Museum of Art, and Boston’s Museum of Fine Arts.

The Secret Blue Ice Cloud in Every Champagne Bottle

Go Medieval by Attaching a Book to Your Belt

They're incredibly rare today, but portable girdle books were once very handy.
objects of intrigue

The Oldest Object in England's Crown Jewels Is a Spoon

Most of the coronation regalia were destroyed in the 17th century, but the anointing spoon survived.
objects of intrigue

Why a New Orleans Museum Displays a Can of Water

It's a memory from the days after Hurricane Katrina.
Video • Object of Intrigue