Why Is This Rippling Alaska Glacier a Research Hotbed? - Atlas Obscura
Want to see fewer ads? Become a Member. 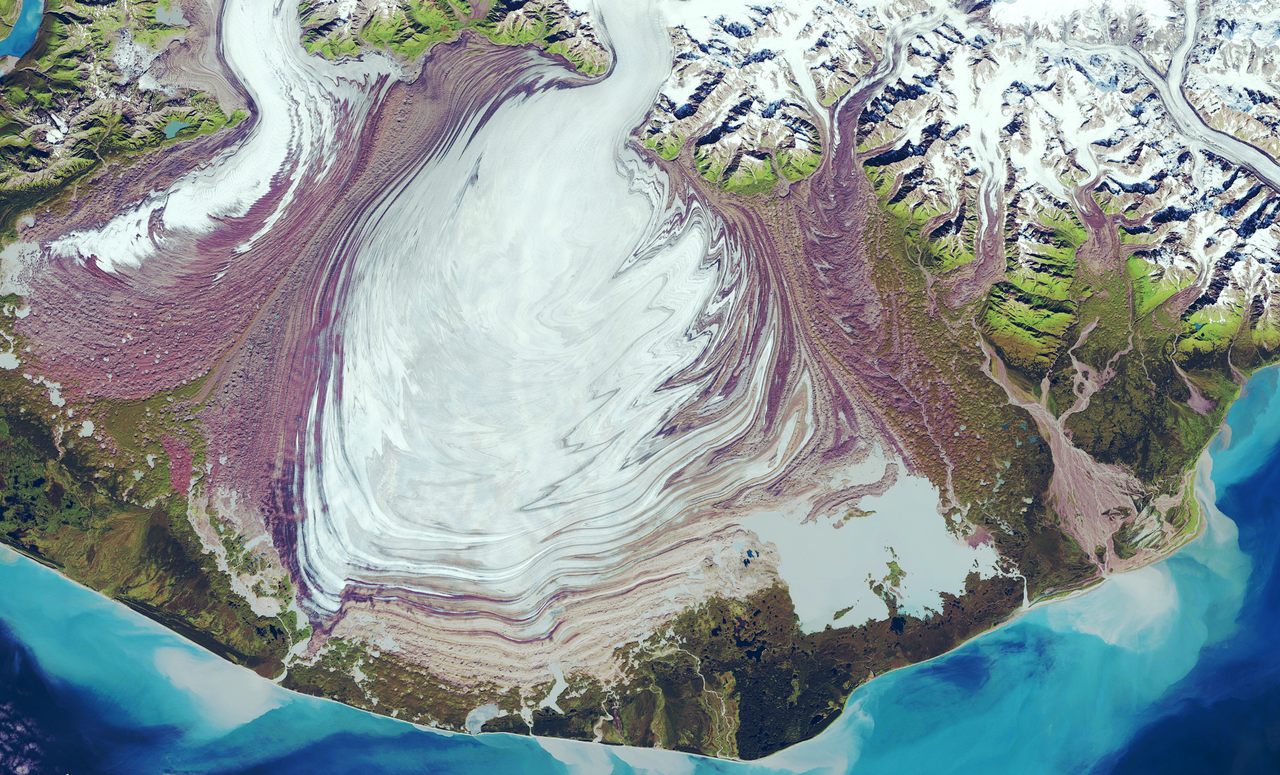 A satellite image acquired in September 2021 shows the central lobe of the Malaspina Glacier surging toward the sea. European Union, Copernicus Sentinel-2 imagery
In This Story
Destination Guide

There’s a restless giant on the Alaska landscape. Just where the state’s panhandle squeezes past a corner of Canada’s Yukon, at the foot of the Saint Elias Mountains, a massive glacier sprawls across a flat plain. Alternating bands of snow and rocky debris ring its miles-long edge to create the appearance of ripples on a pond frozen in time.

The Malaspina Glacier, known as Sít’ Tlein in Lingít, is the largest glacier of its kind in North America, at some 1,500 square miles. The researchers studying it say size isn’t the only thing that matters about Malaspina. The glacier’s unusual behavior, hinted at by those wavy, wild zebra stripes, could challenge climate change models and redraw Alaska’s future coastline.

“The glacier is so chaotic,” says Victor Devaux-Chupin, a graduate student and glaciologist at the University of Alaska Fairbanks Geophysical Institute. “When you look at its patterns, studying it sometimes makes me feel like I’m in a museum looking at famous paintings.” At a December 2021 geophysics conference, Devaux-Chupin presented an analysis of more than three decades of Malaspina’s movements, based on extensive field observations and remote sensing. The research is a step forward in both understanding Malaspina’s unique nature and improving the accuracy of climate change models around the world.

The stunningly photogenic Malaspina is what’s called a piedmont glacier: It flows from a steeply sided valley, where the ice is constrained by mountains, onto a flat plain. The change in environment from narrow to wide open creates the piedmont’s signature rounded lobe. While researchers debate whether Malaspina is the world’s largest piedmont glacier, they do agree that it’s the most accessible. The other big piedmont powerhouses are in Antarctica and Greenland.

“It’s an icon within the field of glaciology,” says Ryan Cassotto, a research scientist and glaciologist with the Cooperative Institute for Research in Environmental Sciences (CIRES) at the University of Colorado, Boulder. “Because of its size and relative accessibility in Southeast Alaska, it has been photographed, studied, surveyed, and imaged for far longer than most glaciers, with the earliest studies dating back to the 1890s.”

But Malaspina’s location also makes it behave differently than other piedmont glaciers of similar size. Its lower latitude and close proximity to the Pacific Ocean—currently less than five miles from its edge—mean its environment is unusually warm and humid compared with that of the other giants. Those glaciers, nearer to the poles, says Devaux-Chupin, “are actually quite static because the ice is much colder. They don’t move as much.”

And Malaspina is definitely on the move. In addition to being a piedmont glacier, it’s also classified as a surge glacier, prone to fits of rapid movement. During active surges, which may last a few years, this type of glacier can move up to 100 times faster than usual. “Glacier surging is a phenomenon that occurs in some glaciers, but not all,” says Cassotto. The fast surges, he notes, leave their mark on the surface of the ice in the form of those characteristic bands. Each dark band is a moraine, or ridge of rocky debris, pushed up during a period of rapid movement.

While glacial surge is not fully understood, and specific triggers vary by location, the phenomenon generally appears linked to an overall build-up of ice. Devaux-Chupin points to other research on glaciers in North America’s northwest that indicates surges may be decreasing as the climate in the region warms: The glaciers may simply not have enough ice to surge. “It makes sense when you think about it,” he says. “If surges are triggered mainly by a build-up of ice, thinner glaciers are less likely to experience surges.”

In his research, Devaux-Chupin was able to determine that Malaspina’s current surge began in 2020. The glacier’s movements are of particular concern because of its proximity to the Pacific—and because the bed of the glacier, the rock beneath it, has actually eroded to about 1,000 feet below sea level. Because of its salinity and temperature, seawater is more efficient than air at melting ice. So if Malaspina surged all the way to the coast, the salty water would inundate the bedrock beneath the glacier, causing faster melting. Entire chunks of ice could calve or break off, and the Alaska coastline would be reshaped. Such an event would only add to the upheaval a melting Malaspina would bring to the region: Devaux-Chupin’s work cites the glacier as likely to become the single biggest glacial contributor to sea level rise in Alaska over the next few decades.

Cassotto, who was not involved in Devaux-Chupin’s research, notes that other factors also make Malaspina particularly susceptible to climate change. In general, Cassotto says, glacial ice flows from high elevation areas where snow and ice accumulate, to warmer, lower elevation ablation zones, where the material melts at a faster rate. Some glaciers have relatively large accumulation zones and smaller ablation zones: This means they have more ice in reserve to replace what is lost in the lower, meltier zones, making them, says Cassotto, “better equipped to withstand climate change.”

“The Malaspina’s enormous lobe exists entirely in the ablation zone,” Cassotto adds. About half of the glacier complex—the lobe and the glacial tributaries that feed it—is, in fact, in that meltier lower zone. If that ablation zone ice melts, there isn’t enough ice in the higher elevation to replace it, leaving the Malaspina especially vulnerable to decline.

Devaux-Chupin and his colleagues are now analyzing additional data about Malaspina’s most recent movements, and hope their work will eventually contribute to more accurate models of how this giant of ice—and other surging glaciers around the world—might behave on a warming planet.

Despite the often dire predictions of current models, Devaux-Chupin is keeping a positive outlook about his research, and his supersized subject.

“On the timescale of Earth’s history, glaciers are actually quite a rare occurrence, especially outside of the poles,” he says. “Studying [Malaspina] is constantly humbling. It makes me think, ‘I’m really a lucky ant that’s here at the right time, let’s figure out as many things as I can while enjoying the ride.’”

When ice goes, lichens and mosses move in and an entirely new ecosystem starts to take shape.
Video • PinDrop