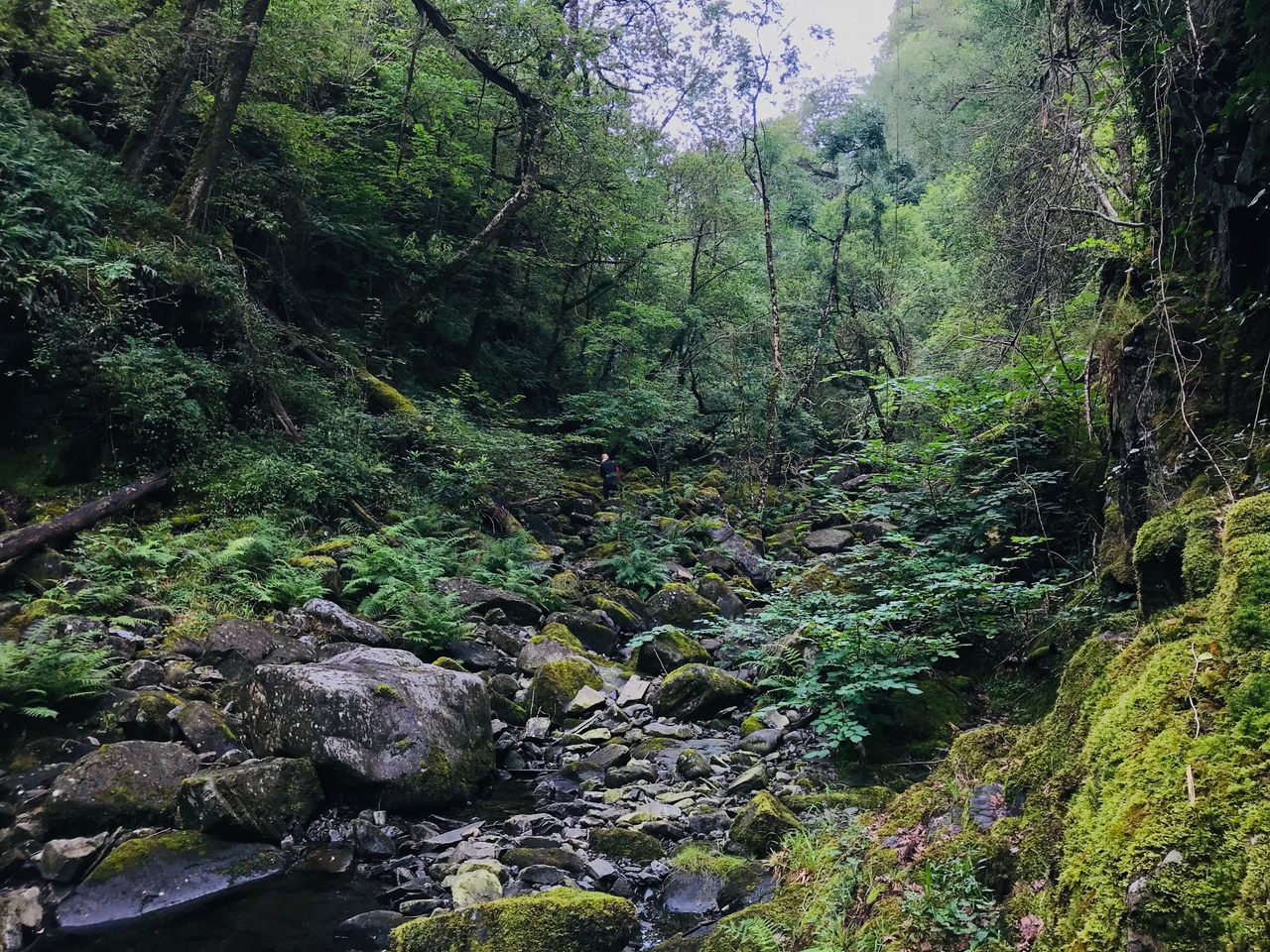 Ceunant Llennyrch National Nature Reserve in Wales is home to one of Britain's few remaining temperate rainforests. All photos: Courtesy of Guy Shrubsole
In This Story
Place

This tangled English forest looks like something right out of a fairytale.

Guy Shrubsole is on a mission to map one of the world’s most endangered rainforests—a moss- and mist-shrouded stretch of ancient oak, pine, birch, and ash along the western shores of Britain. Fed by fierce gales, intense rainfall, and high levels of humidity, Britain’s Atlantic coast was once home to vast swathes of woodland known as “temperate rainforests,” and is now the unlikely location for Shrubsole’s ambitious conservation project.

Woodland conservationists consider the few fragments of ancient temperate rainforests that survive in Britain to be in more danger than their tropical counterparts, says Shrubsole, who describes himself as a “very amateur, but very enthusiastic naturalist.” “Knowing where the rainforests are is a crucial part of knowing how to save them,” he says. So Shrubsole, using crowdsourced information collected through his Lost Rainforests of Britain website, has begun plotting Britain’s first comprehensive rainforest map.

Atlas Obscura spoke to Shrubsole about his rainforest wanderings, rare moss and curious ferns, and how a crowdsourced mapping project can help save Britain’s ancient woodlands from destruction.

What exactly is a “temperate rainforest,” and where can they be found?

When we hear the word “rainforest” we think of tropical rainforests. We think of parrots, toucans, and the Amazon. But in places where it’s mild enough and wet enough for plants called epiphytes to grow on other plants—places like Britain, New Zealand, and British Columbia—then we also have temperate rainforests.

Epiphytes are not parasitic. Because it’s wet enough, they simply use trees and branches as structures on which to grow. Britain’s temperate rainforests are incredibly rich in ferns, including polypody ferns which grow along the branches of trees. There are also many species of rare lichen, moss, and lungwort, and these epiphytes, in turn, support a massive amount of biodiversity when they grow on ancient oak and other woodland trees.

How extensive were temperate rainforests in Britain’s past?

Britain’s temperate rainforests are generally found on the western edge, where it’s wettest and where we get the Atlantic gales blowing in from the ocean. Lots of it was lost a long time ago, unfortunately, but up to 20 percent of Britain could have been wet enough to support rainforests—that’s huge! To give some context, today we only have around 13 percent of woodland cover left in Britain, and less than 1 percent of that is temperate rainforest.

Temperate rainforests would have been felled as long ago as the Bronze Age to clear space for farming. That’s understandable. What’s more tragic is what has happened in recent decades. We still had more of these rainforests up until recent times, but when the Forestry Commission was formed in the early 20th century, it decided to fell old ancient woodland and planted conifers instead.

What inspired you to advocate for Britain’s rainforests?

I’ve been an environmental campaigner for most of my working life, and when I moved to Devon, in southwest England, I was lucky enough to see these natural habitats firsthand. Britain has a globally significant habitat of temperate rainforests, and because we’re so wet and rainy, Britain is the best place in Europe for them. Temperate rainforests are threatened internationally, and I thought, we have this amazing habitat and the potential for much more to regenerate, so why hasn’t anyone ever mapped it?

How does your mapping project work, and how can people get involved?

There’s some great work that’s been done by organizations such as the Woodland Trust, but no one’s produced a comprehensive map. So why not start by asking people: have you seen evidence of rainforest in your local area? I set up a google map on the Lost Rainforests of Britain website and started crowdsourcing people’s suggestions, locations, and photographs. If you think you’ve seen an area of temperate rainforest in Britain, then you can go to the Lost Rainforest of Britain website and fill in the google form. If you’ve got photos, email them over or tweet them to me. It all helps to build up the bigger picture.

I’ve had more contributions than I can possibly deal with. It’s clearly touched a nerve, and I’m glad because for me there’s always this double take: “A rainforest? In Britain? What?” I’ve been signed up by a publisher to write a book on Britain’s lost rainforests now, too.

What more can be done to save the rainforests?

The mapping project is only stage one, really. It’s important that we know where these remaining fragments are, so we know just how little is left. Then it’s easier to see if these wonderful places have been properly protected. The next stage is to ask, what are the best ways to bring back Britain’s lost rainforests? It’s crucial that the government steps in, and I’d love to hear a minister say, “Bring back Britain’s rainforests!” I think it would inspire people to get involved.

I really hope the project helps to re-enchant us with our countryside. We are one of the most nature-depleted countries on earth, but ancient woodland is one of the most special and biodiverse things we still have in Britain. There’s something quintessentially British about it, too. We go on and on about the weather and how rainy it is all the time, so yeah, no surprise, we have rainforests!

How to Forage From the World's Oldest Tree

Long after the forest stops burning, the effects of this year's fires will linger in the soil and water.
forests

During a drought, wood-eating insects can be a jungle's best friends.
science