What the World's Most Remote Islands Were Like Before Humans Arrived - Atlas Obscura
Want to see fewer ads? Become a Member. 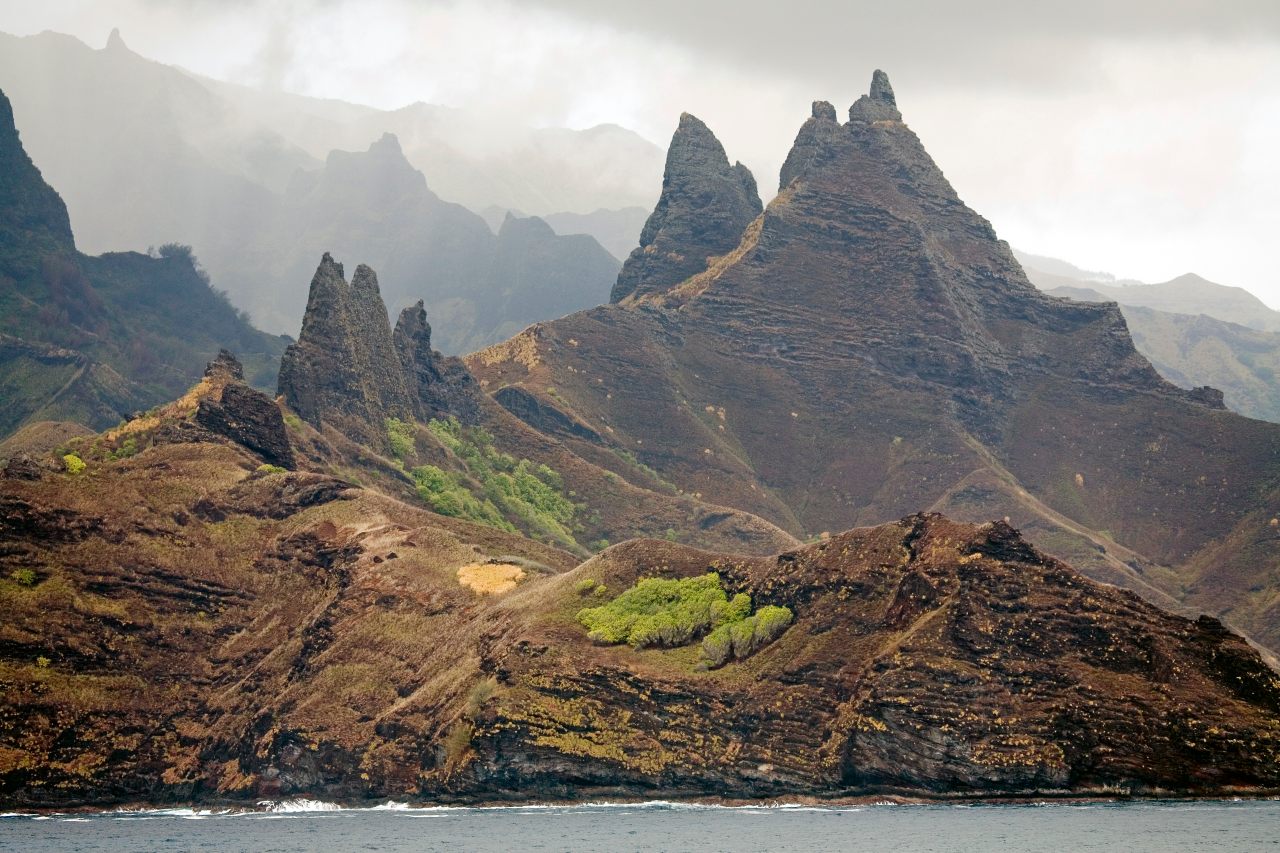 The islands would have appeared from a distance like jagged teeth of volcanic rock—black basalt and rusty tuff, dusted with verdant green—but subtle changes in currents, waves, and wind would have alerted Polynesian seafarers to the presence of the archipelago long before they saw it. On the largest island, a wedged-shaped remnant of a collapsed volcano, the explorers likely avoided the steep cliffs of the western side, and may have found the bays of the north coast more inviting. At least one ocean-going canoe followed the coast as it curved around to the east. There, Pacific swells pummeled the base of a rugged ridge that extended in a slim finger to the south. Beyond that narrowest of peninsulas, sheltered from the open ocean, was a small, protected shore, known today as Ho‘oumi. It was there, nearly a millennium ago, that humans set foot on the most remote islands in the world.

These Polynesian migrants—perhaps from Tahiti, more than 800 miles to the southwest—stepped into a warm, humid lowland forest dense with ferns, fan palms, and stout-trunked pandans. As they unpacked their boats, the air in the narrow valley reverberated with birdsong, many of the calls familiar to their ears from other islands they had visited. Into this new world the humans brought dogs, pigs, and chickens, and plants they relied on, including breadfruit. The island of Nuku Hiva in the Marquesas would never be the same.

We do not know if Ho‘oumi was the first place that Polynesian seafarers explored on the Marquesas Islands, an archipelago in French Polynesia that has the distinction of being the island chain farthest from any continental landmass (the nearest, Mexico, is some 3,000 miles to the northeast). But recent archaeological excavations at Ho‘oumi have revealed the earliest well-dated human presence on the islands, going back to the mid-12th century. Unprecedented new research based on the finds has revealed something else: a glimpse of what the islands were like at the moment those early settlers arrived.

“It’s the first record of this kind for the Marquesan Archipelago,” says Melinda Allen, lead author of a new paper in PLOS One that details thousands of plant and insect specimens analyzed from deposits at Ho‘oumi. Allen, a University of Auckland archaeologist, adds, “What we’re seeing in this collection of little tiny bits and pieces is a window into that lowland as it was.”

That lowland environment has since vanished from Nuku Hiva, cleared for agriculture, grazed by livestock, and otherwise changed by human activity, though scant traces of it persist at higher elevations. Material the research team collected at Ho‘oumi includes signs that humans got to work reshaping this world right away. A piece of wood appears to have been cut with a stone adze and there are charcoal fragments, possibly from fires used to clear the adjacent valley for agriculture.

But, says Allen, there is enough in the team’s collection of pollen spores, insect legs, and other tiny specimens that, “We are seeing the world of the Marquesas as it was through the eyes of those first explorers. We can’t say it’s pristine, but people haven’t been there very long [at that point]. It’s the first fingerprints of people, as opposed to footprints.”

The excavations themselves were almost an afterthought. Allen’s team arrived at Ho‘oumi to follow up on 20th-century digs by another archaeologist, near a small, slow-moving river and remains of a paepae, the traditional, often massive stone platforms upon which Marquesans built their homes for centuries. Digging below the previously studied layers of sediment, the team hit a waterlogged layer of silt, clay, and sand—the perfect, oxygen-free conditions to preserve delicate clues to ancient flora and fauna.

“We were pulling out material saying, ‘Wow, look at all these plant remains,’” Allen recalls. Curious, she sent “some chunks of mud” to paleoentomologist Nick Porch and paleobotanist Tara Lewis, both at Australia’s Deakin University. “I said, ‘Is there anything in here? Want to have a look?’” says Allen. The answer was a resounding “yes” on both counts.

From the few pounds of muddy material received, Porch and Lewis identified scores of different plants and insects, including beetles, ants, mites, flies, and a wasp. Several of the species and genera, particularly the animals, have not previously been documented on the island. The collection, says study coauthor Porch, captures a transition “where people are just beginning the process of modifying the landscape of Nuku Hiva.”

In addition to endemic Marquesan species apparently wiped out after the humans arrived, Porch says, he found the earliest evidence of non-native organisms, including ants, that apparently hitched a ride there as stowaways, “transported accidentally by the Polynesian colonists.”

Porch believes the huge amount of plant and insect material preserved in the deposits may indicate that the flow of the river itself was reshaped by the early settlers, resulting in a buildup of sediment that might otherwise have been carried out into the bay. “People may have modified the hydrology of the valley in which the site was formed in order to make it more suitable for wetland agriculture,” he says.

The new findings are “really fascinating,” says anthropologist Emily Donaldson, author of Working with the Ancestors: Mana and Place in the Marquesas Islands and the upcoming The Weaver, a young adult novel cowritten with Marquesan cultural leader Débora Kimitete. Donaldson has lived on Nuku Hiva and studied the relationship between the islanders’ cultural history and attitudes about land use and environment.

“In terms of their history, this kind of information—solid, archaeological, evidence-based information about what their lives were like before Europeans—is really fantastic for Marquesans to learn about,” says Donaldson.

Marquesan schoolchildren learn French history, and not much about the islands’ pre-colonial communities. Much of that ancestral history and knowledge was lost, particularly in the 19th century, when an estimated 80 percent of Marquesans died from diseases introduced by Europeans. Those who survived faced missionaries and other colonial institutions actively working to obliterate their Indigenous traditions. In recent decades, Kimitete and other Marquesan leaders have helped to restore some of the lost pre-colonial culture. Much more remains a mystery.

The new research also counters the tired trope many Westerners have of Indigenous people living in harmony with a natural, unchanging landscape.

Research on Ho‘oumi and material collected from the site, as well as other locations on Nuku Hiva, continues, including upcoming analysis of bird remains from roughly the same period of early contact. As her team and other scientists coax more lost stories from the layers of Marquesan sediment, Allen stresses she doesn’t want to “demonize” Polynesian seafarers for changing the landscape. She feels her team’s findings have relevance far beyond the earliest humans to call the remote islands home.

“This is about what it means to be a human on the landscape, and the way we interact with plants and animals around us. We have impacts,” Allen says. “We’re seeing two different groups coming together, humans and this natural, non-human environment, and it’s fascinating to think about the long-term relationships that develop there. It’s important that people recognize the impacts that they’re having, and what they want to preserve.”

Lauded for her research on gentle giants of the sea, Andrea Marshall is using her fame to find hope for our troubled oceans.
subterranean

Thought for decades to be extinct, the tiny animal has stayed hidden in a former subterranean speakeasy.
forests

How the 'First Lady of Seaweed' Changed Science

Isabella Abbott, the first native Hawaiian woman to earn a doctorate in science, rewrote the book on her beloved limu.
Video • AO Docs