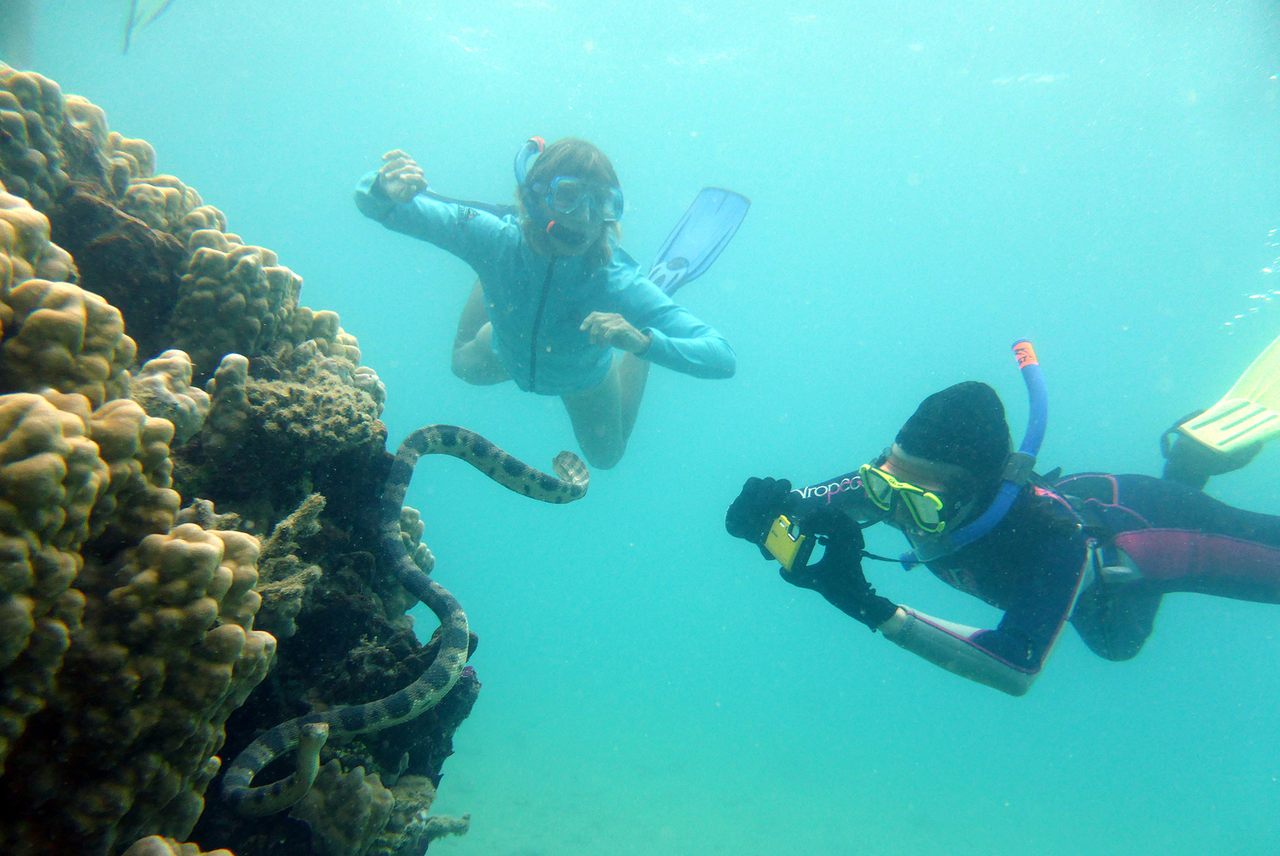 Two of the "Fantastic Grandmothers" document a greater sea snake, photo-identifying its uniquely patterned tail for their growing database. Claire Goiran / CC BY 3.0 (cropped from original)
In This Story
Destination Guide

New Caledonia is an archipelago of a dozen islands in the Coral Sea, about a thousand miles off the east coast of Australia. Rich in thriving, colorful marine life and home to one of the two most extensive coral reef structures in the world, the gigantic tropical lagoons here—a UNESCO World Heritage Site—attract tourists for scuba diving and scientists for research.

For the latter, sea snakes are the star attraction. In fact, says Claire Goiran, a marine biologist at the University of New Caledonia, the Baie des Citrons—a small bay off the archipelago’s capital, Nouméa, that’s framed north to south by free-standing coral caves and arches—is one of the best spots on the planet for observing sea snakes of all sorts.

But not all of the snakes are easy to find. One species, called the greater sea snake—the five-foot long Hydrophis major (also known as Disteira major), a venomous, lethal serpent colored in shades of green-and-black blotches—had been sighted only six times in Goiran’s 15 years of research here, and was, until recently, thought to be very rare in the South Pacific.

Enter the Fantastic Grandmothers, a group of seven snorkeling senior citizens turned citizen scientists who range in age from 60 to 75. Collectively, they’ve managed to track down a whopping 257 greater sea snakes and collect data crucial for studying them—more detailed ecological information, in fact, than has ever been collected for any wide-ranging species of sea snake. Their work to date has changed scientists’ understanding of the species, including its feeding and behavioral patterns.

Prior to the grandmothers’ contributions, little was known about them, and data on their lifestyles were scarce. The grandmothers’ research results—which Goiran describes as “astonishing”—recently led to a paper published in the journal Ecosphere.

The grannies entered Goiran’s orbit in 2017, when the marine biologist, then researching a smaller species of sea snake, bumped into an old friend from the local diving center named Aline Guémas, while the two were out snorkeling. When Goiran mentioned the trouble she’d been having finding greater sea snakes, Guémas, who is 61, offered to help. She invited some of her retiree friends to join her, and had soon gathered a task force clad in snorkels and fins.

“Before I realized what was going on, I had this team of seven grandmothers working for me,” says Goiran. “Not all of them knew each other before, but they became good friends.”

The Fantastic Grandmothers are an active bunch. Prior to meeting Goiran, they were all fond of outdoor activities and nature, and familiar with the life aquatic thanks to their individual passions for sailing, diving, and snorkeling.

What began as a helping hand for Goiran soon became a full-fledged, methodical citizen-science project. Every morning, including weekends, the Fantastic Grandmothers would meet at 8 a.m. (8:30 in winter) to inspect the reefs in the bay—swimming nearly two miles a day, taking photos of any snakes they saw, and following them as they fed.

“Seven pairs of eyes will see seven more things than a single [pair],” says 75-year-old Monique Zannier, one of the Grandmothers. “There is so much to discover and be amazed [by]. It was unexpected but very rewarding.”

Each greater sea snake’s body markings are unique, and the grannies were soon able to create an extensive database by recording the color patterns on their tails via photo identification. The results have helped marine biologists like Goiran understand how abundant these snakes are in the waters off Nouméa, how their reproduction cycle is seasonal (they court in winter and give birth each autumn), and how impactful their ecological role is in the food chain (the fact that they munch exclusively on catfish means that their prevalence alters the catfish ecosystem as well).

All of which advances research in an underexplored field whose lethal subjects live far off in deep waters, and can be hazardous to handle. (Despite being venomous, though, greater sea snakes are largely docile; there are no records of an attack on a human in New Caledonia. Plus, the grandmothers don’t actually touch or capture the snakes; they just take pictures.) Most data about these snakes are still collected accidentally, when they wash up on shore or are caught by people fishing.

Baie des Citrons is now the Fantastic Grandmothers’ favorite place to snorkel, given its exceptional biodiversity and number of underwater habitats. Nor do the grannies look only for sea snakes. They also seek out frogfish, octopus, cuttlefish, and sea slugs. Sometimes they even hunt for zebra-shark eggs.

Turning their hobby into fruitful scientific research has been an honor, they say. And a soothing balm in their own lives.

“I feel calm and weightless [in the water],” Zannier says. “All the worries stay on the land.”

In learning about sea snakes, they’ve also learned about themselves.

“Before I was part of this research program, I was scared of snakes, marine and terrestrial,” says Guémas. “Dr. Goiran taught us to understand and love them. Now when I take photos, I spend time observing their behavior, the way they swim, how they forage and breathe.”

Another granny, 63-year-old Marylin Sarocchi, agrees. “Now I find [sea snakes] beautiful, undulating along the reef. I talk to them. Before, I used to run away from them.”

Scientists observing a pod in the wild think the animals may choose specific species for a skin care wellness routine.
science

Studying the animal’s nerve network may help scientists understand our own.
Video