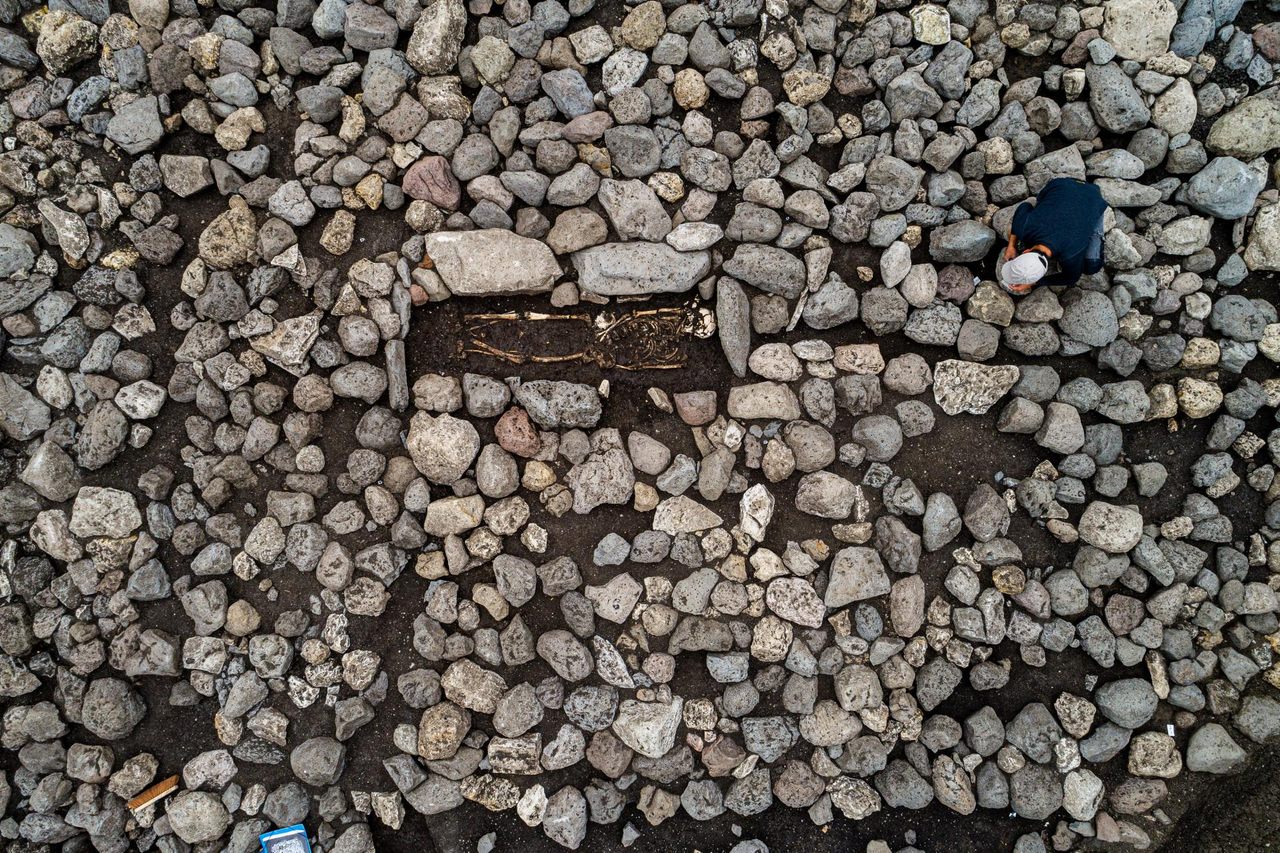 For millennia, megaliths were humankind’s biggest, boldest way to show a mortal or deity that you cared. And few places host more of these massive, enigmatic stone structures than France, where many megaliths are clustered in Brittany and other northern regions. Long before William the Conqueror or the cultivation of wine, prehistoric communities left their mark by erecting the standing stones.

Now, roadwork in Puy-de-Dôme, France, between the cities of Bordeaux and Lyon, has revealed that the ancient stone footprint is a little bigger than previously thought.

In September, a team led by Ivy Thomson, an archaeologist with the National Institute for Preventive Archaeological Research (INRAP), unearthed a rocky trove: about 30 basalt stones, called menhirs, in a 500-foot-long line; five menhirs arranged in a horseshoe shape; and a single limestone rock roughly carved to resemble a human. The stones in the alignment generally got smaller the farther south they were found, suggesting an intentional north-south plane in the construction of the monument.

“Before this discovery, we thought that the megalithic culture never really reached the center of France,” says Thomson. “It’s the first site [here] that can be called a megalithic monument.”

Besides the curious alignments, Thomson’s team found a rock-adorned tomb that housed a single skeleton. Adding to the mystery, all the menhirs, and the tomb itself, had been knocked down and covered up, in what may have been an act of ancient iconoclasm. But without further evidence, it’s hard to solve the whodunnit.

Megaliths are, by definition, huge. But they weren’t all created equal, or assembled for the same reason. Around the world, researchers have found megaliths comprising everything from ancient calendars to ritual sites. Some are stone monuments like Stonehenge; others are tombs like Ireland’s Brownshill Dolmen. The four-acre site at Puy-de-Dôme may have been a bit of both.

“This is an exceptional tomb,” says Thomson. “It is monumental, involving [a lot of people in its] construction, yet it [contains] only one individual. It is undeniable that the man for whom this tomb was built was a person of great importance.”

After the team conducted its initial analysis, the important artifacts—the carved limestone, the well-preserved stones, and the human remains—were removed from the site, and roadwork was allowed to continue. Now, the finds from Puy-de-Dôme are housed at INRAP’s lab in Clermont-Ferrand.

The megalithic site hasn’t been dated yet, but Thomson’s team has thoroughly documented the area with photographs, drawings, topographic surveys, and more. Radiocarbon dating the sole skeleton will likely help researchers figure out when, exactly, all the heavy construction took place.

Thomson says the stones that composed the tomb and surrounding megaliths—some of which weighed a ton—were brought to Puy-de-Dôme from multiple sites in the surrounding area. The stones’ numerous origins may suggest that several communities were involved in the construction of the site.

Cleary there are still a lot of unknowns, and Thomson’s team has a lot of analysis left to do. “One thing is certain, however, and that is the most important thing,” Thomson says. “[T]hese megalithic constructions involved a huge [amount of] manpower and collective work.”

Archaeological work at Tombos reveals the stories of people who lived more than 4,000 years ago—and inspires new interest from the people who live there today.
mystery

Two new ones just turned up in a tomb on a remote Scottish island.
cemeteries

They were found in the Yanghai Tombs in modern-day Northern China.
megalithic

Who needs stones when you have marshmallows or foam?
Video • Wonder From Home