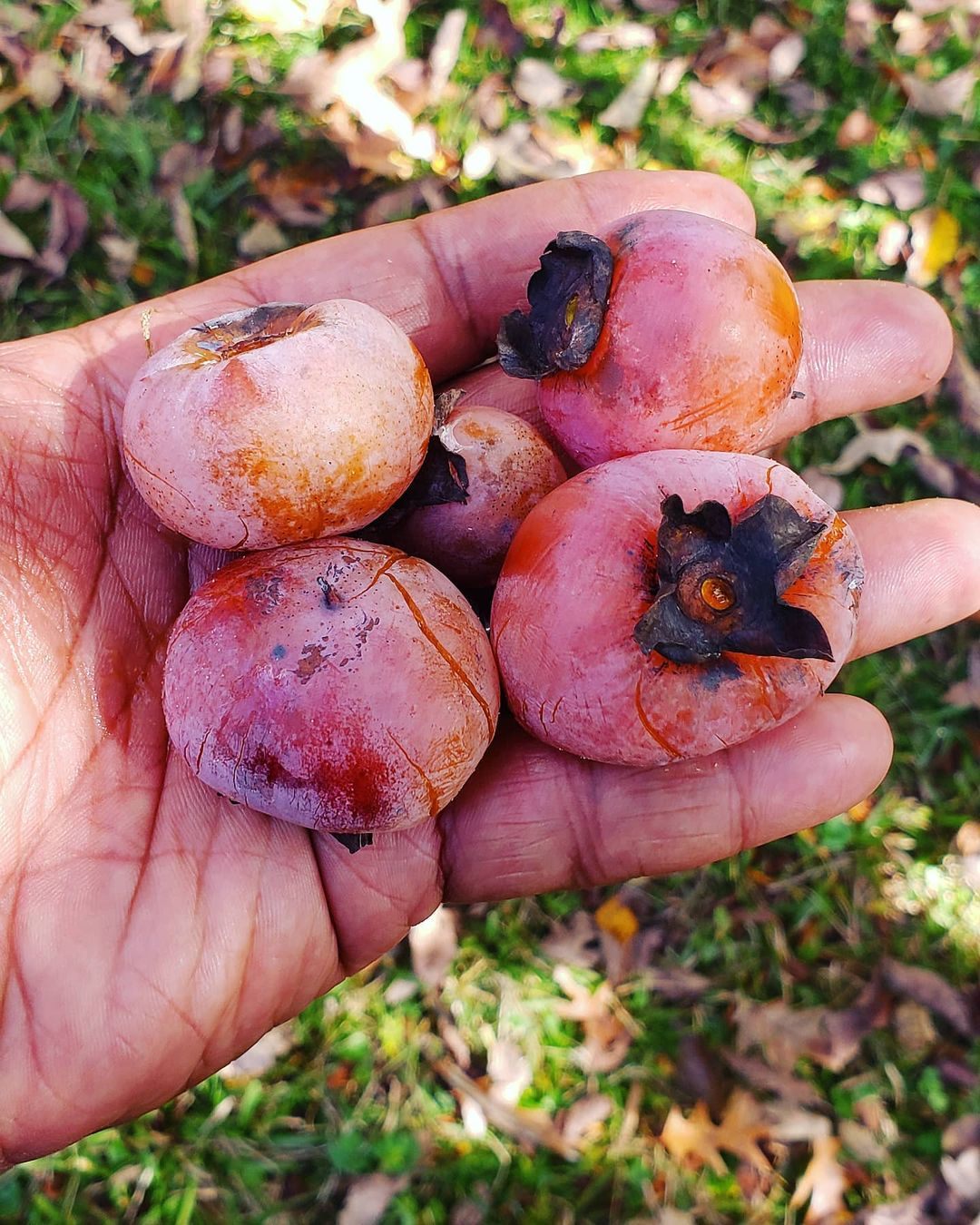 Michael Twitty, the James Beard Award–winning culinary historian, estimates he has brewed his grandmother’s persimmon beer about a dozen times. Made by fermenting Diospyros virginiana, the diminutive North American persimmon, with sugar, honey, and yeast, persimmon beer is more akin to fruit wine or liqueur than anything brewed with barley, malt, and hops. Twitty continues to make his family recipe for its sweet-tart flavor and striking amber hue imbued by red pine straw. More than anything, though, he continues the tradition of fermenting this gently boozy elixir because of its deep ties to Black American history and its power to start conversations.

In his book The Cooking Gene, Twitty describes the experience of sharing a batch with contemporary Civil War reenactors. “Persimmon beer became my social lubricant of choice, even with a whole troop of Confederate soldiers,” he writes. Twitty notes that it was likely the very same drink with which his ancestors would have toasted their freedom in 1865.

For generations of Black families across the American South in the 18th and 19th centuries, persimmon beer played an integral role in daily life. In his quest to uncover more about the foodways of his ancestors, Twitty learned that American persimmon trees are a genetic echo of fruit trees in West Africa, and that both the plant and the beverage provide a thread across the history and geography of the African diaspora.

With ’simmon season currently in full swing, Gastro Obscura spoke to Twitty about his family history, the importance and evolution of foraging, and how much a single recipe can reveal.

Why was persimmon beer so significant among enslaved Black communities in the American South?

People had to ferment or distill some beverages for health reasons. They didn’t know about germs. They knew when things were gross or icky or made you sick, but they didn’t know that it came from these invisible things called germs. Beer was very common in the colonial world. Children drank beer. It certainly was not the same alcohol level that we know about. Persimmon beer is a little different. You’d have to drink a lot of this to get a buzz.

You’ve said that the persimmon beer you’ve brewed is more or less the same as what people were drinking in 1865. Do you know the origins of your grandmother’s recipe?

My grandmother died at 95 in 2008. My father knew my great-great-great grandfather. My great-great-great grandfather was born in 1839. He died in 1957. His death certificate attests to the fact that he was 112–113 years old. One of his ancestors was so old that he was born at the end of the 17th century and lived to the beginning of the 19th. So longevity runs in that part of my family. My grandmother was born in a log cabin and she was surrounded by people who lived during enslavement. All around her. All the time. So I’m going to bet you that that recipe comes from our life in enslavement.

In my case, it’s a situation where I’m glad that I was able to talk to both of my grandmothers and my grandfathers and learn about these things. I feel like I’m one more generation where it doesn’t die. One of the biggest things to me was the idea that my ancestors took the time to say, “This looks like something back home. Let’s try it.”

If you look at Diospyros mespiliformis—it’s called the jackalberry in South Africa, by the way, but I just call it African persimmon—it is a dead ringer for Diospyros virginiana, the smaller Virginia persimmon. I am one of the first people to say “there’s a connection here.” I have plenty of research to back what I’m saying up, but I haven’t really seen it anywhere else before. I think that’s because people haven’t really put their attention on this kind of deep-dive into what all of this means.

What are some of the connections you came across in your research?

Persimmons have a very interesting cultural relevance. In Gambia, they talk about it as a tree of abundance, a tree of spirit. It’s interesting how in one particular narrative—I’m referring to the WPA narratives from the 1930s of those born into slavery—this man from Alabama describes how he and a friend were gathering persimmons and he heard the voice in the tree of spirit of someone who had recently passed. That’s a very specific sort of attachment. What it tells you is a lot of my ancestors’ connections and beliefs about these trees and plants were passed down.

You refer to the persimmon as the “king of Southern foraged fruit.” How has foraging changed from back then to now?

Some of these foraged foods that are the grandeur of younger white folks that are into this now, quite frankly, this is not white people food. One of the best quotes I’ve ever seen in reference to pawpaws was “The food fit for Negros and Indians.” Remember, Nature was Black and red. Civilization was white. Planting your food, having orchards, all that stuff, was European. The idea was that if you could freely live off nature, you were backwards. You were savage.

In order to forage today, you’ve got to have land and access to nature. Black people, Native people have constantly been forced off the land and forced to move. How are you supposed to have a true Gullah Geechee cuisine based on the fruits of the sea and the islands off the coast when you can’t go to the island you all used to own, because it’s now a golf course? How are you supposed to be an Indigenous person and forage for chokecherries, and hunt and fish when you’re on the worst piece of land that was set aside for a reservation? Our history is more than just Jim Crow. Our history is the policing of where Black bodies can go.

Could you talk more about that and your experience with foraging?

When I go foraging, I have to ask the question, “Will I be seen as a trespasser? Whose land am I on?” I encourage you strongly to revisit some writing about Black people in nature, what it’s like to go hiking, what it’s like to go out and be in that space and have someone say, “I don’t have to put my dog away” and “Police, an African-American man is attacking me.” That was a crazy, unfortunate moment, but it just showed that it’s not always safe to do what other people take for granted. That can and does impact food culture. It can and does impact the way that we are able to pass on the traditions of our ancestors, of our grandparents and parents.

How do you respond to people who don’t want to acknowledge the impact of systemic racism on the Black and Indigenous foraging communities?

I don’t want to call it racist. But I want to point out that there are consequences to long-term systemic pressures on a people. I think that some people may misread that criticism as saying, “Oh, it’s all racist. It all comes from racism.” No, not all of it. It also comes from people being unaware of certain cultural practices in relation to nature and food and local environments.

People have to realize that more than one group can share the provenance of a food ingredient, but in very different ways. And of course, we never want to obscure or obfuscate the role of the initiating group that domesticated something. We also want to make it plain that these same ingredients have different places in the cultures that adopt them. From the perspective of people of color, it’s very clear to me that the use of persimmon in the Southern highlands is very much related to the presence of Southeastern natives and people of African descent and the use of the persimmon in the coastal South is very much tied to Indigenous people and Africans who were enslaved people of color.

What do you hope to learn by studying how your ancestors ate and drank?

It’s not just a question of what did they eat, it’s a question of how did they take agency and ownership over their lives, over their food supply. When you open up the average American textbook you never, ever see the enslaved Black person as thinker. They make us look like pets. They make us look like people who simply didn’t have any sort of agency, ownership, curating, caretaking of their own reality. It’s also about acknowledging that in a lot of cultures, especially where there is oppression and marginalization, it’s a gesture of love. Anything that gives you pleasure, happiness, joy in your culture, it’s a gesture of love. Especially in Black traditions, sharing a beverage, sharing food—especially food that’s rare, seasonal, a delicacy—it’s love.

What Does It Take to Build the World's Largest Dry-Stone Maze?

A monument to the formerly enslaved woman will soon stand in the town she called home.
museums