The Fight to Bring Home the Headdress of an Aztec Emperor - Atlas Obscura
Want to see fewer ads? Become a Member. 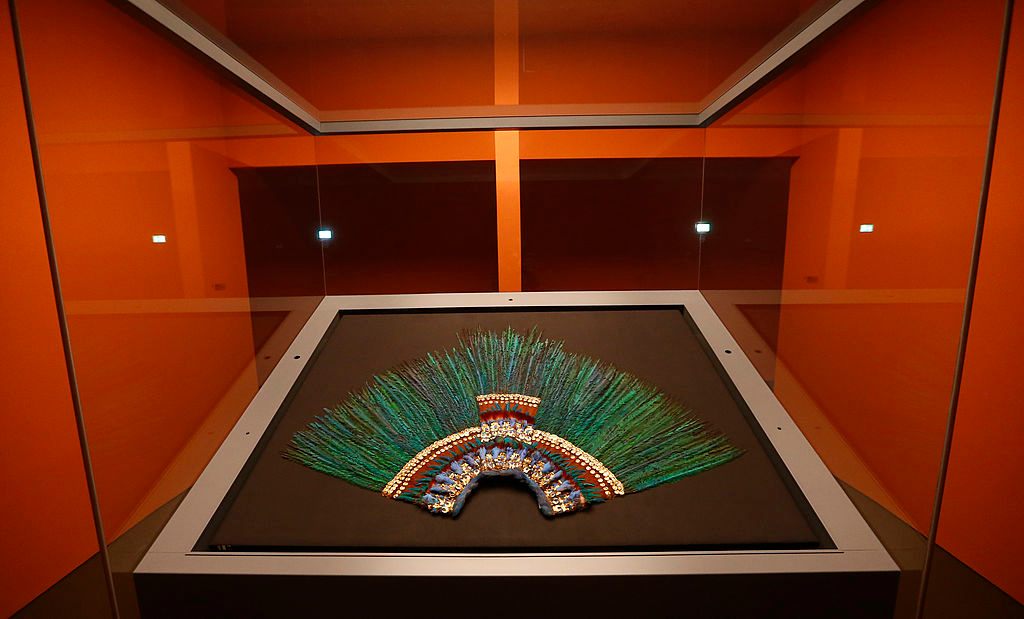 The headdress on display at the Museum of Ethnology, Vienna. Alexander Klein/ AFP/ Getty Images

In 1878, the Austrian geologist and explorer Ferdinand von Hochstetter went prospecting in the hills above Innsbruck. He wasn’t looking for gold or minerals. Rather, he needed exhibits for a newly founded Museum of Natural History in Vienna, of which he had just been named the director. He found what he was looking for in a dusty drawer of the Renaissance-built Ambras Castle—a magnificent piece of feather work, tucked away in a case together with assorted objects from North America, China, and the Sunda Islands in Indonesia.

Although it was folded up and somewhat moth-eaten, Hochstetter quickly realized he was looking at something special: a masterpiece of Mesoamerican art, probably Aztec, possibly from the court of Moctezuma II, ninth Aztec emperor who ruled from 1502 to 1520. If so, it would be one of the few surviving relics of its kind, a rare direct link to the last indigenous ruler of the Mexica. The possibility that this object passed directly from the Emperor to the Spanish conquistador Hernán Cortés gave it a value beyond price. It also meant that it was destined to be a point of dispute between the governments of Austria and Mexico up to the present day.

The largest part of the object is made of nearly 500 tail plumes from the resplendent quetzal arranged in a semi-circle. These alone would have been worth a fortune to the Aztecs. Nestled inside this dazzling green arc is a mosaic made from the body feathers of the quetzal as well as ones taken from a number of other tropical birds. Four kinds of gold ornaments sewed to the feathers and arranged in rows complete the design of the outside. On the reverse side, each of the feathers is individually tied with maguey thread to a coarse-meshed fabric on a wicker frame.

Trouble was, Hochstetter didn’t know quite what this magnificent feather work was. It had been entered in the castle inventories at different times as an “Indian apron” and a “Moorish hat.” After much deliberation and study, he determined that both of these descriptions were wrong. The item, he decided, was a standard, a kind of flag that would have accompanied the emperor or his generals into battle.

Hochstetter published his findings in 1884. Other experts immediately took issue with his conclusion. It took a pioneering American anthropologist named Zelia Nuttall to point out the obvious. The feather work wasn’t a body garment or a battle standard: it was a head-dress. The old label had been right all along.

Nuttall based her arguments about the headdress on a careful examination of the object itself, conducted on location in Austria, combined with a detailed comparison to images and descriptions preserved in surviving Aztec codices. Nuttall published her work in 1887, as part of the inaugural issue of Harvard’s Peabody Museum Papers. When her writing failed to persuade her detractors, she arrived at the International Congress of Americanists in Paris the following year sporting a home-made model of the headdress on her head.

The point was made. Less certain, though, was the path the headdress took to get to the cabinet in Ambras Castle. Hochstetter and Nuttall were both convinced that it came straight from Moctezuma as part of a group of “presents” given to Cortés via intermediaries shortly after the conquistador arrived in the Central Mexican port of Veracruz. These were only the second documented group of Mexican artifacts to reach Europe. Most have gone missing since they arrived in Spain in 1519.

Experts now think that the Vienna headdress is unlikely to have come to Ambras Castle directly from Spain. It seems to have spent some time in the possession of one Count Ulrich of Montfort, an Austrian nobleman who had served as an envoy to the court in Spain in the 1560s. It probably wound up in the Innsbruck collection after he died some time in the 1590s. The headdress has remained in Austria ever since.

In recent years, there have been a number of voices calling for the headdress’ repatriation to Mexico. In 1991, the Mexican government formally asked for the headdress’ return. A study commissioned by the Austrian government claimed that a safe return would be impossible without a specially designed case to protect it from the vibrations caused by flight. According to the study, it would require a plane 984 feet long—the length of 2.7 football fields—and 164 feet high to buffer the vibrations caused by take-off and landing. Since no such plane exists the repatriation seems unlikely in the short term. In the meantime, visitors to Mexico City have to content themselves with a rather spectacular replica of the headdress in Mexico’s National Museum of Anthropology.

When the Mexico City duplicate was commissioned in 1940, its identity as a royal “crown” seemed secure. More recently, art historians have cast doubt on the headdress’ identification with Moctezuma. Christian Feest, a former curator at the Vienna museum, has pointed out that Aztec emperors wore a gold crown known as a diadem instead of a feather headdress. Most now believe that the headdress was of a type used as an offering, worn by priests during ritual representation of gods. But it still seems likely to have been made in the royal workshops of Tenochtitlan before the arrival of the conquistadors. Certainly, the sheer extravagance of the piece suggests it was made for the head of a royal.

In the words of the Australian historian Inga Clendinnen, the Aztecs, or Mexica, “passionately prized feathers” as “projections into this dimmed world of the light, color, and exquisite delicacy of the world of the gods.” They called their most valued feathers and feather work “the Shadows of the Sacred Ones.” The royal featherworkers, the amantecas, worked in a part of the emperor’s palace called the Totocalli or House of Birds. There they made the emperor’s feather garments, shields and fans. There they also kept hundreds of birds of various kinds alive in cages. According to the conquistador Bernal Diaz del Castillo, 300 men were employed solely in keeping them fed and cared for.

Feathers were a much desired trade good. Conquered provinces paid tribute in feathers. Most magnificent of all was the quetzal, native to the cloud forests of Honduras and Guatemala.

To us, they might appear green, but this is insufficient. One Mexica writer described them like so: “They are green, herb-green, very green, fresh green, turquoise colored. They are like wide reeds: the ones which glisten, which bend. They become green, they become turquoise. They bend, they constantly bend; they glisten.”

The Aztecs believed that in the afterlife, warriors returned to life in the form of splendidly ornamented birds. They dwelt in a realm called the Place of the Flowering Tree. All things bright with color, whether they be sparkling gems, brightly colored flowers, or birds with iridescent plumage, issued from this higher plane of reality. Featherworks like the Vienna headdress were thus always about more than decoration or display. They were messages from another world.

In the years after the Spanish conquest, the traditions that informed the making of the Moctezuma headdress underwent a process of translation. The Place of the Flowering Tree was reinterpreted as the Christian Heaven, and the amantecas of the palace were put to work crafting feather icons for the Catholic Church. Over the centuries, the Moctezuma Headdress changed meanings and identities as well as it passed from being a royal gift to curio to exhibit in an ethnographic museum. For the time being at least, it seems that it will be frozen in this current role.

How Wildfire Smoke Affects the Flavor of Wine

Including the occasional turd.
museums

A museum's basement holds a trove of fascinating castoffs.
poison

The Most Dangerous Things You Can See in Museums

From a V-2 rocket to arsenic wallpaper.
museums

Beyond the "Southern Cross," there are dozens of symbols of the Confederacy.
Video