The Mysterious Phenomenon of Seals With Eels in Their Noses - Atlas Obscura
Want to see fewer ads? Become a Member. 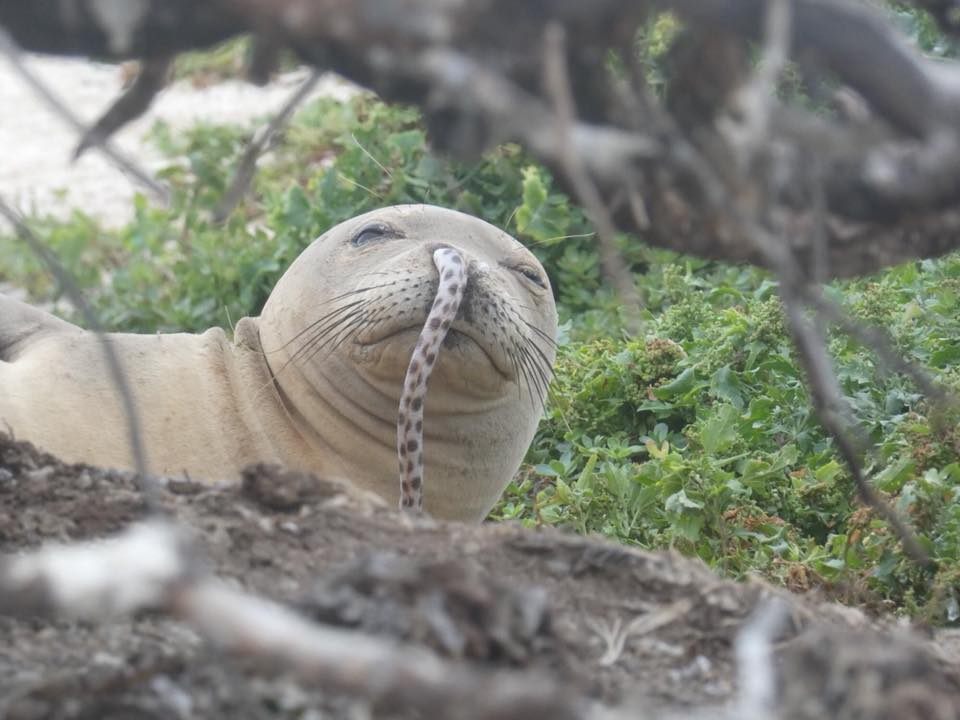 Why? How? NOAA/Brittany Dolan, NOAA Permit #16632-02
In This Story
Destination Guide

How does a seal get an eel stuck up its nose?

Not long ago, the Hawaiian Monk Seal Research Program posted the picture above, depicting an unfortunate young seal with an eel in its nose. Surprisingly, this is not the first time the researchers have encountered a pinniped in such a predicament.

Hawaiian monk seals are an endangered species. The research program, part of the National Oceanic and Atmospheric Administration, follows six main monk seal subpopulations, studying their health, diet, population demographics, and ecology, with the aim of minimizing threats and helping these small populations survive and thrive. The researchers pay close enough attention to the animals that they notice when something strange, such as a nose eel, occurs.

A few years ago, for example, another seal was found with about four inches of eel hanging out of its nostril. The team was worried about the potential danger to the seal: It was wheezing a bit, and if it dove deep or tried to swim, the nose eel might have created a passageway for water to enter the seal’s lungs. The research team decided it was worth capturing the seal—for no more than 60 seconds—to try to remove the nasal invader.

In practice, the removal took no more than 45 seconds, even though that eel turned out to be almost two feet long. “We are pretty sure the complete animal was removed, as the skull was found, but some fins or spines may have come off the eel during the removal,” the researchers wrote on Facebook. “The seal did not struggle very much, and no blood came out when the eel was being removed.”

This latest nose eel was also removed, with a “slow, steady pull.” The seal was unharmed; the eel, however, perished.

The researchers aren’t quite sure why this keeps happening, Charles Littnan, the program’s lead scientist, explains in an email. It seems to be a new trend: The researchers have only observed the nose-eel phenomenon in the past few years, after decades of monitoring monk seals.

One theory is that the eels may end up in the seals’ nostrils when the seals are nosing around crevices and rocks in coral reefs for food, Littnan writes. A bothered eel could be trying to defend itself or run from the inquisitive seal, only to end up lodged inside the nasal cavity. Or, perhaps, the seal was swallowing the eel and had to regurgitate it—the monk seal version of snorting milk up your nose. For now, the mechanism that leads to seals with eels up their noses is a mystery.

The Mysterious Illness Affecting U.S. Diplomats in Cuba Has Spread to China

Scientists still haven’t figured out why or how the symptoms started.
mystery

Investigating the Cold-Blooded Murder of a Long-Dead Dodo

Who killed the flightless bird at the Oxford University Museum of Natural History?
libraries

The Secret Codes Hidden in the Books of a Scottish Library

The mysterious symbols are a way for elderly readers to keep track of what they've already read.
medieval

Send in the bots.
Want to see fewer ads? Become a Member.
From Around the Web
THE GASTRO OBSCURA BOOK
Taste the World!
An eye-opening journey through the history, culture, and places of the culinary world. Order Now