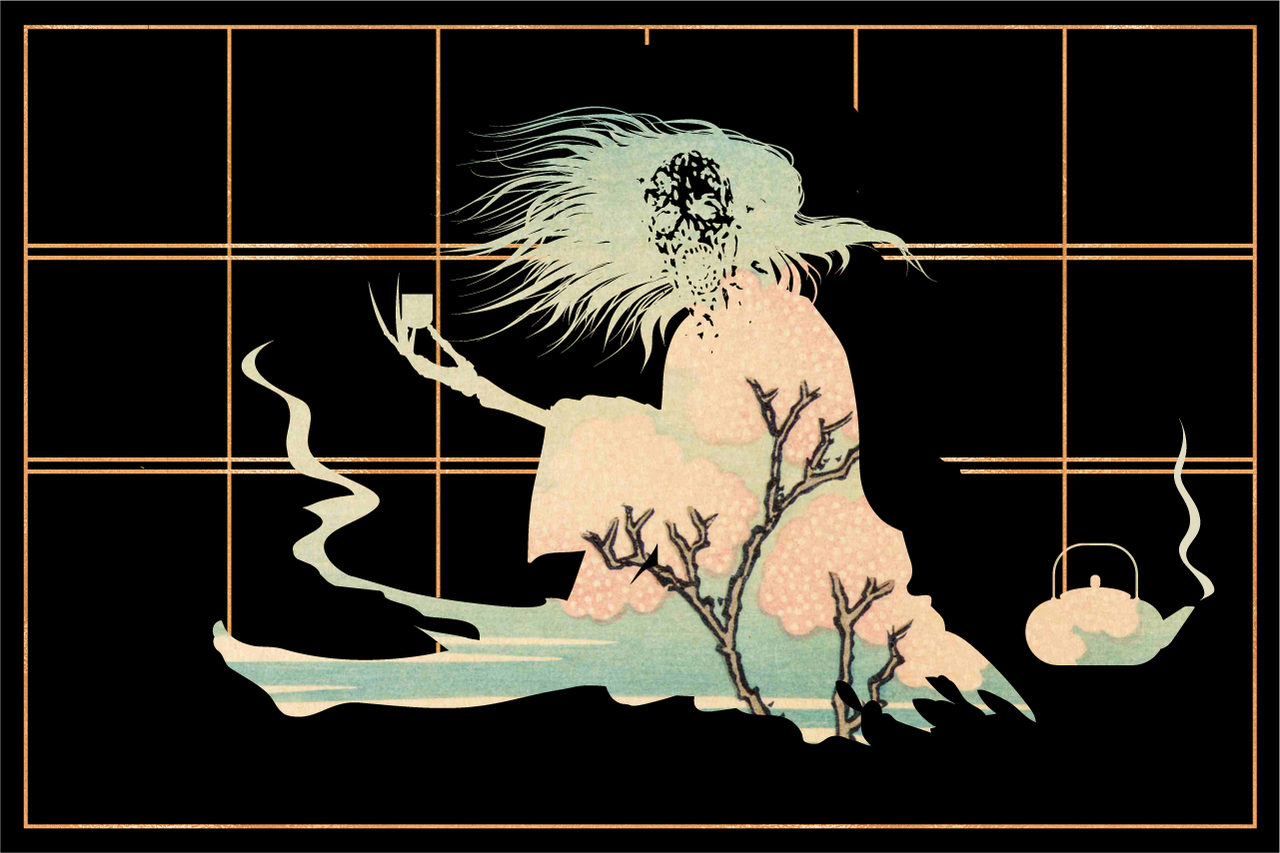 Tales of the onryō go back more than a century. W. Staehle / Unusual Co.

A dead woman, her face disfigured by poisoned makeup, returns to take revenge on the husband who murdered her. A samurai is beheaded in a failed rebellion, his head put on display in a town square, where it bellows for the return of his body. In the wake of a nobleman’s exile and death, pestilence and disease spread throughout a kingdom, as rainstorms flood the cities, lightning strikes the palace, and the emperor’s sons die, one by one.

The Japanese tradition of ghost stories is rich with tales of yurei, roughly translating to “dim spirits”—among them, the onryō, or “vengeful spirits.” They recur again and again in the Japanese narrative tradition, from ancient poetic epics, to stirring theatrical productions, to modern, international horror blockbusters.

Wrathful ghosts, to be terribly feared, onryō are driven by the desire to get even for some perceived wrong, going so far as to cause natural disasters to get their way. This desire for revenge and consignment to a kind of purgatory distinguishes the onryō in the canon of Japanese ghost lore.

Onryō stories are supernatural, but they often deal with real royal machinations, corrosive jealousy, and crimes of passion, culminating in a cosmic rage that transcends life and death. These tales have been recorded as early as the eighth century. The disastrous relocation of Japan’s capital then by Emperor Kammu, for example, followed the sovereign’s false accusation of disloyalty against his brother, resulting in the brother’s exile and death. According to onryō legend, Kammu’s move of his court from Nara to Nagaoka, and 10 years later, from Nagaoka to Kyoto, were elaborate attempts to escape the wrath of his brother’s spirit.

Such stories may have been further influenced by the military expansion of Japan across East Asia. The country’s 1895 defeat of the Qing Dynasty and occupation of Taiwan likely introduced Japanese storytellers to Chen Shou Niang, a popular ghost story about a murdered wife who haunts her killers. Perhaps the greatest and most well-known onryō story, however, predates this cultural encounter by decades: the 1825 play Yotsuya Kaidan, a complex, multilayered revenge epic centered around the disfigured Oiwa’s revenge against her dissolute samurai husband, Iemon.

The popular rendering of Oiwa as an onryō, her face distorted, her long black hair and funerary gown flowing, is so striking that—centuries after its origin in the Edo Period’s traditional kabuki theater—it evolved to stunning effect in the Ringu book and film adaptation of the 1990s, and has joined the modern pantheon of movie monsters.

Of course, onryō are but one thread in Japan’s tapestry of supernatural creatures and spirits, which feature prominently in Shinto, the Japanese indigenous religious tradition that dates back to the Neolithic. “It’s a real complicated system of different religions,” says Michael Dylan Foster, a professor of Japanese at University of California, Davis, and author of The Book of Yokai: Mysterious Creatures of Japanese Folklore. “The notion behind Shinto is that objects and animals and living things—and some not-so-living things—are animated by some kind of spirit.” Such spirits, called kami, inhabit everything from the birds in the sky to the rocks of a cliff, from earthquakes and rivers to the souls of the dead.

Some of the spirits roaming the Japanese islands are good-natured, but the vengeful onryō fall into a broader category, along with the many other monsters, creatures, and unexplained phenomena, known as yokai—roughly translated as “bewitching mysteries.”

It is universally acknowledged that the only way to “defeat” an onryō is to appease it. Foster cites one of the most famous onryō tales, that of Sugawara no Michizane, a ninth-century poet and politician, who, exiled by the jealous rival courtier Fujiwara no Tokihira to a humiliating post on the southern island of Kyushu, died there in obscurity. “After his death, all kinds of bad stuff started happening in the capital, specifically to the people who had not looked upon him favorably,” says Foster. “There were all kinds of storms and fires and people dying of illness, and a diviner of some sort determined that [it was] the vengeful ghost of Sugawara no Michizane.”

In this case, the onryō was appeased by granting the ghost a measure of justice: the restoration of his official record, the construction of a Shinto shrine in his memory in Kyoto, and, ultimately, the elevation of Sugawara no Michizane into a kami—a full evolution, from malefic phantom to revered spirit.

Japan continues to love such stories today, and the Shinto shrines constructed in Sugawara no Michizane’s memory remain. As he was “was such a good scholar and a poet,” these shrines, Foster says, are now “where students who are going to take entrance exams go to pray for his help.” From vengeful, lightning-flinging ghost to magnanimous tutor? Stranger tales exist in Japanese folklore, but few have such a happy ending.

These provincial specters are as gruesome as they are hungry.
Video • AO Docs

2:07
Want to see fewer ads? Become a Member.
From Around the Web
Atlas Obscura Trips
Artisans & Exiles: Exploring the Hidden Traditions of Japan’s Sado Island
View This Trip
Thanks for sharing!