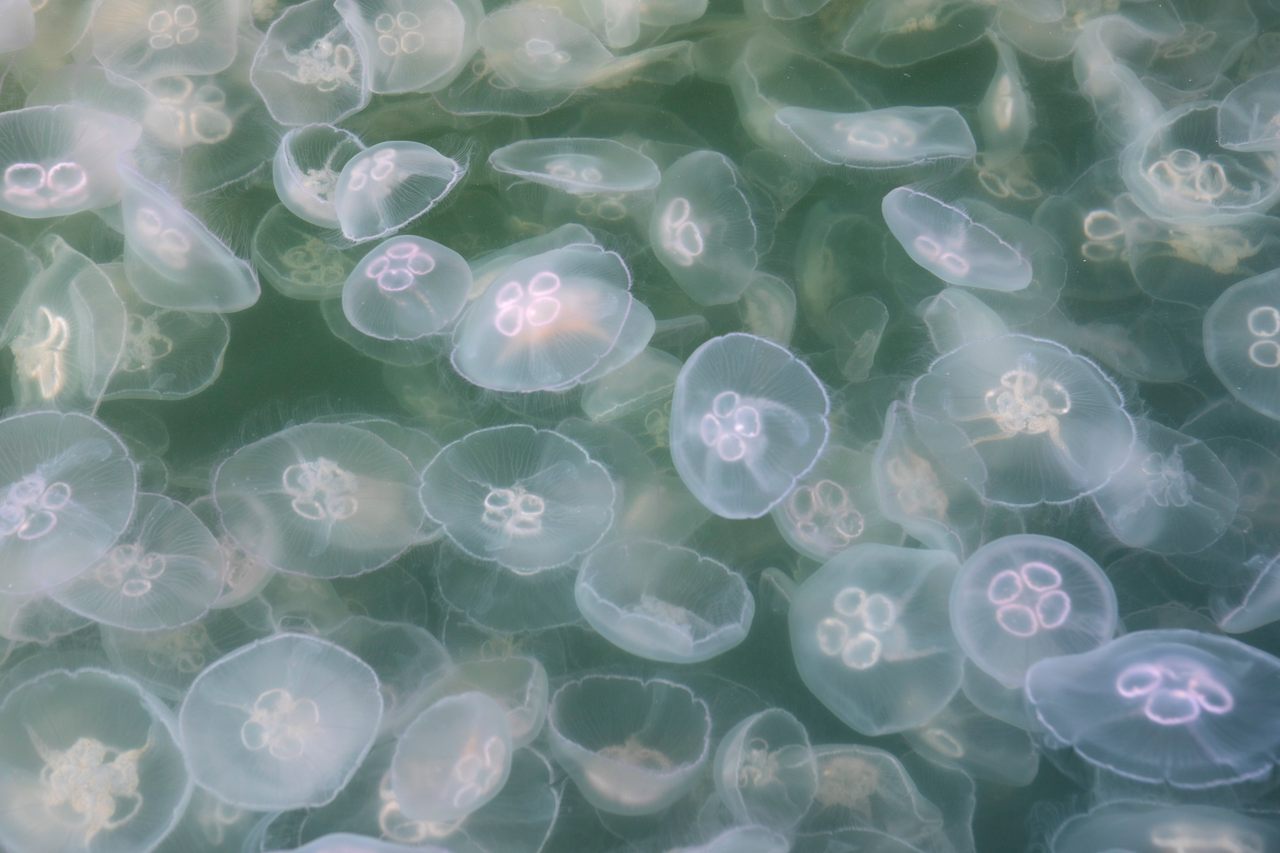 An Aurelia aurita bloom, as translucent as it may be, actually hosts a nutritional bounty for its lucky consumer. Courtesy Mads Fjeldsø Christensen

The research vessel Polarfuchs, or Polar Fox, set out in March 2015 on a 20-month race against time. Filled with nets and biologists, the vessel wasn’t low on fuel or rushing to some far-off destination. Its hurry was a result of the cargo it carried: luminous moon jellyfish, or Aurelia aurita, which would expire if they took too long. So the Polarfuchs spent more than a year and a half speeding up and down Kiel Fjord, in northern Germany, scooping up jellies near the Helmholtz Center for Ocean Research.

The goal of the Polarfuchs team was simple—to figure out what marine predators had to gain from eating their gelatinous neighbors. As their name would suggest, jellyfish aren’t exactly ahi tuna. Their bodies are almost entirely made of water. (Lacking brains and hearts, jellyfish would be right at home in The Wizard of Oz.)

But as reported in the Journal of Plankton Research, despite their aloof disposition and translucent bodies, moon jellyfish have enough nutritional value to warrant a predator’s time. Those nutrients aren’t in the jellyfish bell—the cap that constitutes the ‘jelly’ on the fish—but in the animal’s gonads. “That is a common reproduction strategy in the animal kingdom,” writes Jamileh Javidpour, a marine ecologist at the University of Southern Denmark and a co-author of the study, in email. “It fuels eggs (and newly hatched larvae) with easily accessible energy.” The energy source increases the chances that baby jellyfish will survive.

Armed with plankton nets and dip-nets, the researchers trawled troves of moon jellyfish in the Baltic waters, to bring them to a lab and investigate what, if anything, made them nutritionally viable. Other than water, the jellies are mostly made up of nerves, including their mildly toxic tentacles. Their delectable reproductive organs explained why ocean dwellers such as Atlantic cod or deep-sea octopus were bothering with the jellyfish.

Previously, research showed that penguins have a penchant for jellyfish, despite their caloric inadequacies. But with no penguins in Northern Germany, the moon jellies are still sating the appetites of plenty of other marine predators. In the German inlet (despite its name, the Kiel, carved out by glaciers, is not geologically speaking a fjord), the increasing frequency of jellyfish ‘blooms,’ linked to warming waters in the era of climate change, means that ocean predators can dine on a many-course meal in one swim.

Javidpour compares jellyfish, with their high water content and relatively few calories, with juicy foods like watermelon or cucumber. These creatures have a bit more to them, however. Over those 20 months of morning nettings, Javidpour’s team found that the amount of fatty acids in the jellyfish varied with the seasons, peaking during the jellyfish blooms in spring and winter, and falling in summer and autumn.

Though more remains to be learned about the jellyfish and their ecological niche, a mechanical innovation may be needed before the research can dive deeper. “Because jellyfish biomass is among the lowest carbon biomasses,” Javidpour says, “sometimes the volume of material that you collect is below the detection level of our machines!” It seems that predators may be better at digesting jellyfish than the biologists who study them.

A study digs up the origin of the single species that gives us turnips, bok choy, broccoli rabe, and more.
exploration

An "Arctic mystery" may lead to a future of food under the permafrost.
science

As Israel’s Desert Truffles Become Scarce, a Researcher Works to Grow Them as Crops

Decades of work have led to a breakthrough.
Video • Gastro Obscura