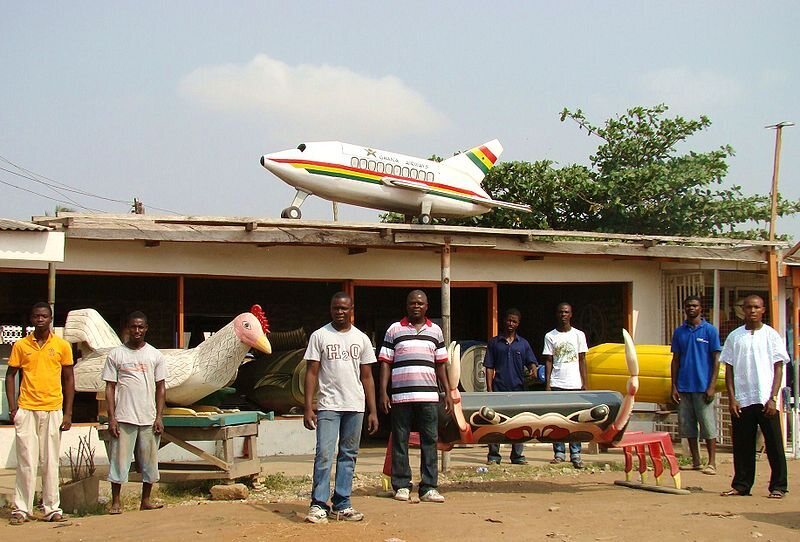 Figurative coffins in Ghana. (via Wikimedia)

In Ghana, death is mostly envisioned as a one-way trip, not a final, but a certainly a transitional point. In fact, the concept of mortality is viewed as an active, and maybe the most important, part of one’s life, like the departure for another country to start your new existence. And if one can push the metaphor of the coffin as the vehicle carting you from one dimension to another, then the quirky idea of being buried in a comfortable one for the ultimate journey, a Mercedes or a private jet for example, doesn’t seem so extravagant.

The tradition of figurative coffins is fairly recent, but it has expanded in half a century to become an iconic occurrence of contemporary African customs and vernacular artforms. Back in the early 1950s, a village chief who was into showcasing his authority through spectacles of pageantry, ordered a palanquin in shaped of a cacao pod from his local carpenter, but didn’t get to enjoy it as he died before he was able to be paraded in his fancy fruit. Nonetheless, the villagers, wanting to pay a last homage to their beloved headman, decided to use the palanquin as a coffin. For the crowded funeral celebration, they carried the oversized cacao casket around town. The formidable procession had such a visual impact on the members of the community that the tale of this event spread throughout the area.

As the story goes, a young carpenter named Kane Kwei was one of the many who heard about the flamboyant coffin and the anecdote stayed in his memory until the day when, sadly, his grandmother passed away. The family lived in Teshie, a suburban village of Accra where the recent construction of the Kokota airport had become an intense source of interest. Kwei’s grand mother never got to take a plane, but was fascinated by the engineering of those flying machines. The idea of manufacturing a casket in the shape of an airplane popped into Kwei’s mind: she could finally travel in this revolutionary means of transportation for the big journey of death itself. Kwei sculpted a realistic version of a 1950s airplane in “wawa” wood, digging a passager compartment large enough to hold a human body, and sealed it with a removable wooden panel. He then patiently painted every detail, from the tiny windows to the undercarriage, even the gripping slots of each tire. 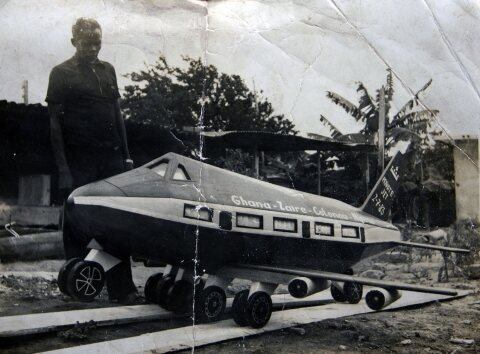 Kane Kwei and his first figurative coffin for his grandmother. (via Wikimedia)

Needless to say, Kwei’s grandmother’s funeral party sparked a wave of enthusiasm in Teshi, and few weeks later, a man commissioned a boat coffin to bury his fisherman father. The craze for figurative coffins was underway, and Kane Kwei’s elaborate caskets are now a deep part of the funeral customs of the Accra area. Inhabitants sometimes spend a lifetime’s savings to organize their own flamboyant departure, so that their remains can rest inside a design meticulously chosen to correlate with their life.

For example, your profession might inspire your choice. A teacher could request a pencil casket and a farmer a fruit. One’s vice might also provide a good motif, like drinking habits, even if a person was more of a fan of Coca-Cola than beer. Members of a family sometimes also ask for a coffin shaped like the totemic animal of their clan, with requests as varied as crabs, elephants, pigs, and lions. The casket can reflect expectation for the afterlife: an elegant shoe, a modern cellphone, or a luxury vehicle are wishes for wealth and opulence, promises for the client that his or her second life will be far from the tough economic realities of the first one. 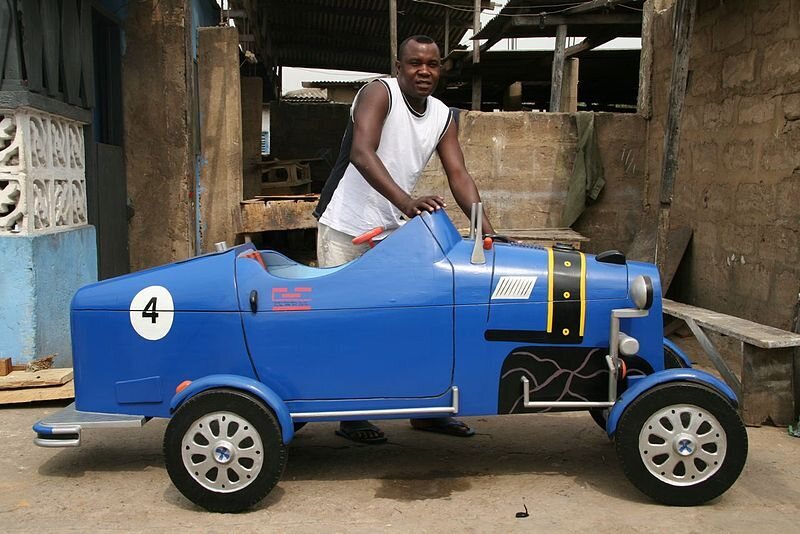 The day of the funeral gathers an intimidating number of people, often including those who never knew the deceased. The rite is both a social and an entertainment event, with a performative aspect which involves the whole community in a dramatic weeping cortege. The brightly colored coffin itself is buried in the ground with the help of numerous strong men, and despite all the work that goes into it, the coffin is only seen that day, an ephemeral quality that gives a sincere and poetic beauty to the Ghanaian funerary practices. Kane Kwei died in 1992 and, unfortunately, there is no information about the shape of coffin he chose to carry him to his second life. After him, many of his apprentices, like Paa Joe, became renowned for their craftship and creativity, which caught the interest of the occidental world. Since the 1990s some museums have acquired the fantasy coffins, and one in the shape of a Nike sneaker is currently on display in the Connecting Cultures exhibition at the Brooklyn Museum. The original carpentry workshop, easily noticeable from the road with its fish sign, is now run by Kwei’s great-grandson Eric Adjetey Anang who diligently continues the tradition of Ghanaian figurative coffins. 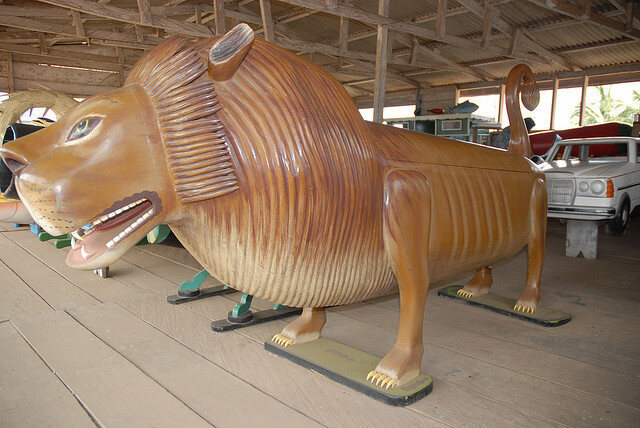 We have surprisingly overlapping death traditions.
Want to see fewer ads? Become a Member.
From Around the Web
THE GASTRO OBSCURA BOOK
Taste the World!
An eye-opening journey through the history, culture, and places of the culinary world. Order Now