The Only Bookstore on Najafi Street - Atlas Obscura
Want to see fewer ads? Become a Member. 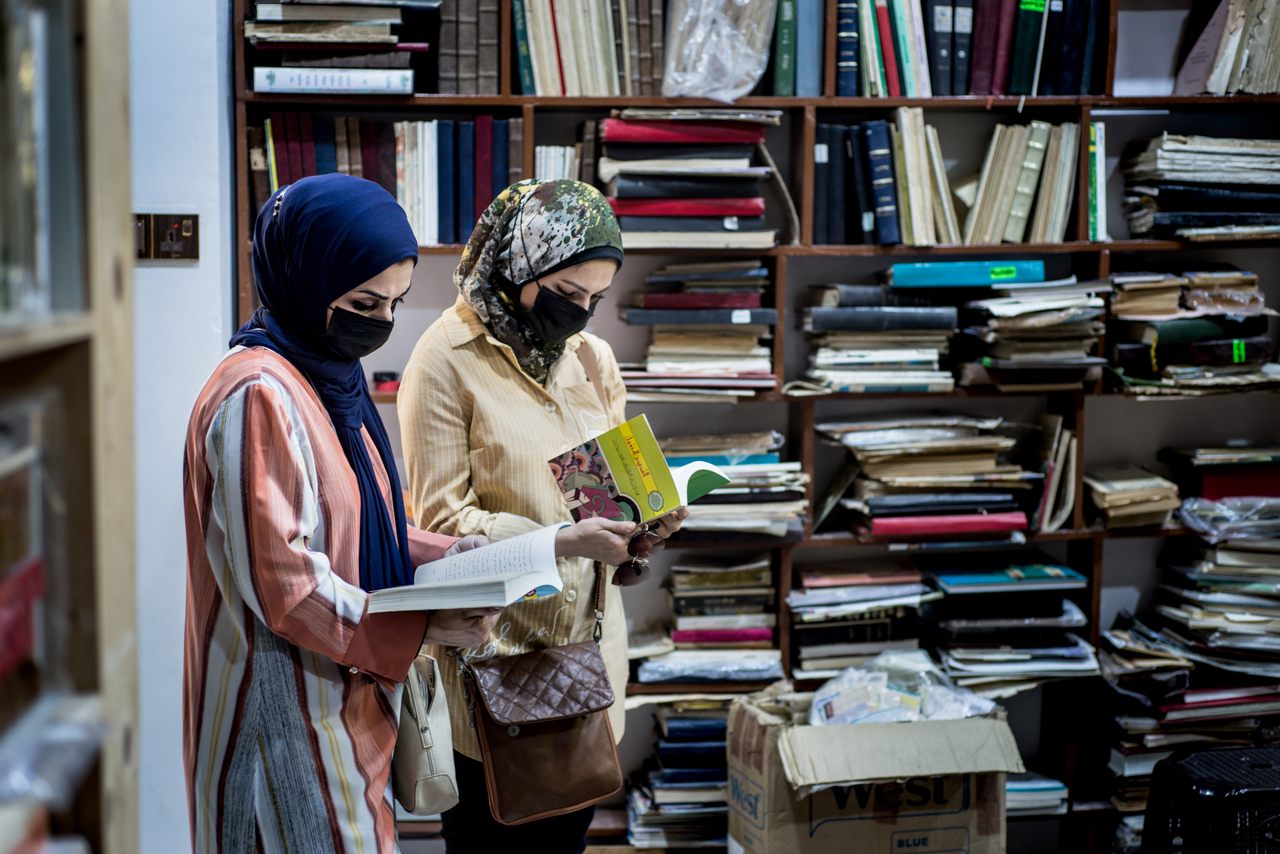 Customers return to Maktaba al-Sham in Mosul's Old City. Shopping for books on Najafi Street is a tradition that dates back more than a century. All photos: Lina Malers
In This Story
Destination Guide

Tucked into an alleyway off Najafi Street in Mosul’s Old City is a small red and gold sign advertising a bookstore: Maktaba al-Sham. Not long ago, it was one of countless bookstores along the wide avenue lined with arched windows and doorways. Since the early 1900s the street has been a bustling cultural hub where intellectuals meet to sip tea, debate friends, and buy books.

But today Najafi Street is in ruins, burned by the ISIS fighters who occupied Mosul and bombed by a United States-led coalition in an effort to liberate the city. The airstrikes destroyed many of the buildings, leaving only pits in the ground. Others are broken, their wire and concrete innards twisted and exposed.The elegant arched building entrances that remain lead to empty, dark spaces. Inside the shell of one former shop, you can still see the outlines of books set aflame by ISIS preserved in ash. Four years after the liberation of Mosul in 2017, Maktaba al-Sham is the first, and so far the only, bookshop to return to the street.

Daud Salim first opened Maktaba al-Sham around 2001. The now-49-year-old man with silver hair and a hummingbird’s constant energy has loved books since childhood, and he found a natural talent for selling them. He started with used copies of novels by famed authors such as Agatha Christie and Victor Hugo, as well as some history titles.

Salim kept the store open when ISIS took over in 2014, but on December 5, 2016, as the battle between ISIS fighters and liberation forces began to advance toward the Old City he realized the only way he could survive was by closing the store and sheltering in his home on the other side of the city. During the final battles in 2016 and 2017 ISIS took refuge in the maze-like warren of small streets in the Old City, blowing up the bridges behind them and trapping civilians there as human shields.

When Salim returned to Najafi Street in March 2018, almost a year after liberation, the Old City was still a dangerous place. The streets were littered with broken pieces of concrete, and ISIS had booby trapped houses with explosives. Many buildings had dead bodies within them from the bombardment, even after volunteer efforts to clear the area.

Despite the devastation, Salim decided to reopen Maktaba al-Sham. “This bookstore has big memories for me. I spent more than 20 years here. So I remember every place, I remember who went where and who did what, and I longed for it,” he says. Also, he says the rent was cheaper in the rubble.

Maktaba al-Sham is a small sliver of a shop, its interior hardly bigger than a closet and its walls fully obscured by books. But this tiny store’s return has outsized meaning to Mosul residents who feel they lost a key part of their city’s heritage in the battle. After the conflict Mosul became like two cities divided by its river. The Left Side of the city, where fighting and airstrikes were less intense, is again full of bustling avenues, restaurants, cafés, and residential neighborhoods, while life has returned more slowly to the Right Side, where the Old City is located. New cafés and markets on the Left Side sell books and attempt to fill the gap that the destruction of Najafi Street left behind, but hundreds of years of history cannot be easily replaced.

“Any person who loves books in Mosul, if you ask him what street he loves, he will immediately answer Najafi Street,” says Imad Abdul Azizi, a professor of history at the University of Mosul. Abdul Azizi grew up in the Old City and since he was a teenager, he has spent every free moment combing through texts on Najafi Street. He’s a true book-lover, who says he ranks books second only to his family.

Long before the war Abdul Azizi was regular at Maktaba al-Sham and would spend hours going through new arrivals with Salim who has become a friend over the years. After the liberation of Mosul, he entreated Salim to return.

“I was so joyful when Maktaba al-Sham came back to Najafi Street,” says Azizi, “I spend most of my time each day after work with books and my friend in this bookstore.”

The books for sale on Najafji Street over the years have reflected the political upheaval Iraqis have lived through. When Salim first started buying and selling, Iraq was under the rule of Saddam Hussein’s Ba’ath party and any books that might clash with the party’s political ideology were forbidden. After the American invasion of Iraq removed Hussein from power in 2003, there was a rush for previously banned books. Salim remembers Najafi Street swarming with activity as people rushed to read about communism, secularism, religion, and politics.

“After the fall of the regime people were excited to get to know books,” he remembers. “It was so open, nothing was forbidden.” Salim traveled abroad to expand his collection, searching publishing houses in Cairo and Beirut for new titles and antique rarities. He prides himself on his ability to know people and know what they want to read. “Every book I have, I know who will buy it,” he says. “Even if I had 100,000 books I would know exactly who would buy them…I’m like a doctor, I know what the person in front of me needs…[Books] are like a treatment. I always know from the moment I open a book who needs it.”

But when ISIS came to Mosul in 2014, they banned works that did not fit their strict religious guidelines, which Salim says included almost all non-religious books. “When ISIS entered Mosul everything ended. Books were finished.”

Books became contraband. Salim hid the majority of his stock in a storage unit near his bookshop and secretly met customers in alleyways. He would pass them copies of novels in black plastic bags, The most popular works during those years were anti-authoritarian novels like 1984. Salim himself poured over forbidden history books trying to understand how organizations like ISIS come into being.

Bookselling was dangerous. Salim says ISIS kidnapped a bookshop owner named Dhaker Ali for selling law books and they burned his shop on Najafi Street. “They took him and that was the last day anyone saw him.” For four years Salim didn’t know what had become of Ali. But he later heard that ISIS dumped his body in a mass grave along with thousands of others. “We were all waiting for the moment when we would die,” Salim says.

ISIS came for Salim’s books as well. In the summer of 2015, during the Muslim holy month of Ramadan, fighters found the storage unit where he had hidden 5,000 books. “They discovered I had books that were forbidden according to them. They believed the books I brought from Egypt on society and philosophy were a violation…so they started the fire,” says Salim.

After the blaze, the inventory of his small bookstore was all Salim had left. But he continued to acquire books. Because he could not travel to get new titles, he bought used books from people’s home libraries and sold them to loyal customers.

One of Salim’s friends bought the works of Egyptian author Naguib Mahfouz from him in 2016. ISIS members stopped the man at a checkpoint and found him carrying a copy of Mahfouz’s Chitchat on the Nile with a woman on its cover. The depiction of women’s faces was forbidden under ISIS and the man was taken into custody. He was elderly and ill and during ISIS’s interrogation he suffered a heart attack and died, according to Salim. Salim closed Maktaba al-Sham later that year.

Inside the walls of Maktaba al-Sham today, it can feel as though life has returned to normal. People can freely buy and read the novels of Naguib Mahfouz or anything else they please, and Salim has a new storage unit filled with books he has collected from around the world. But, the majority of Najafi Street remains hauntingly empty.

“There are people who [will] never come back here. Even if NGOs paid them money, they would say I’m sorry I won’t go,” Salim says. But he feels differently. “We must return. Even if [the place] is dead, we must return,” he says. As Salim walks through the neighborhood he points to empty lots and burned buildings, naming the people who used to make up his community. He does not know if or when they might return. But Salim he clings to hope.

Coming back to the Old City was a risk to his business. He says when he initially opened he lost money, but the impact he made on the community encouraged him to keep going.Sometimes, people with memories of Najafi Street come to take pictures of him and his shop on the street of bookstores. “People gave me the bravery to stay,” says Salim. “You might say it’s impossible to be on this side, but I remained and the people came.”

They're filled with handpicked books and a bag of tea or coffee beans.
infrastructure

Anarchic, organic, surreal, this enclave was once among the most densely populated places on Earth.
bookstores