The Canadian Team on the Hunt for Radioactive Artifacts - Atlas Obscura
Want to see fewer ads? Become a Member. 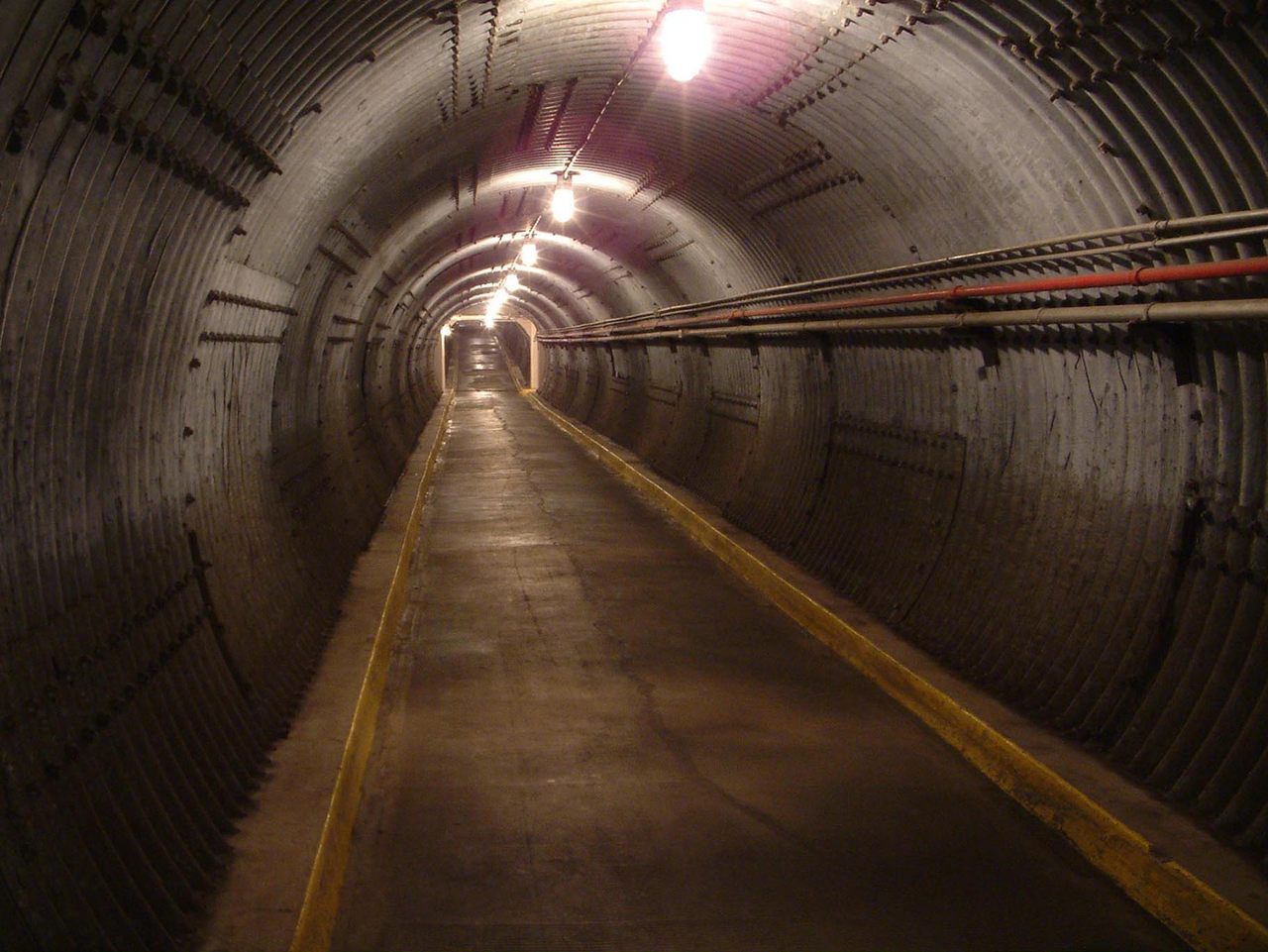 Curators worried a fallout detection device in the Cold War-era bunker that now houses the Diefenbunker Museum might be radioactive. Instead, they found radiation coming from an everyday object in their collection. Mike Steinhauer/Getty Images
In This Story
Place

Since 1997, the Diefenbunker Museum of Cold War history has occupied a 100,000-square-foot bunker just outside the Canadian capital of Ottawa. Commissioned in 1959 to become the heart of government in case of a nuclear attack, the bunker had a device designed to measure fall-out levels outside, to let evacuated government officials know when it was safe to emerge. Ahead of some planned renovations last year, the museum hired a specialist to check for any radiation coming from the device itself. It turned out to be perfectly safe. But while there, the contractor turned up something more dangerous.

“It was a cream-colored jar with a lid,” said the museum’s Sean Campbell. “You could go over to your grandmother’s house and that can be something that sits on the kitchen counter, next to the sugar.” But the 1912 ceramic pot, called a Revigator, had a lead and uranium lining and anyone who spent an hour in its immediate vicinity, unshielded, would receive a full year’s worth of the acceptable standard for radiation exposure.

Right away, the museum moved the jar to a little-used corner of the bunker. For long-term storage, the specialist recommended sending the museum piece to Canada’s Historic Artefact Recovery Program (HARP). Run by the Canadian Nuclear Laboratories (CNL), which maintains its own radioactive waste storage facilities around its headquarters in Chalk River, Ontario, HARP accepts radioactive objects manufactured prior to the 1960s.

HARP’s administrator, Tim Rowe, gets contacted regularly by museums across Canada that have discovered—or rediscovered—radioactive items in their collections. Queries have risen over the past year and a half, as museums closed to visitors during the pandemic used the downtime to reorganize their collections. In doing so, they often identified health and safety issues. In 2020, HARP collected more than three times the volume of radioactive artifacts than it did in 2018.

“That Revigator was probably the coolest thing we’ve had in a while, just because of how nuts it sounds,” Rowe said. “It was supposed to make you feel a lot better, but all it really did was just put a whole bunch of radon gas into your water, and trace amounts of arsenic and radium, and then down the hatch.”

The history of adding radioactive materials to household objects is longer than you might think—and institutional collections around the world reflect that.

Writing for an audience of other museum professionals on the history and handling of radioactive materials in ceramics and glass, Donna Strahan, a conservator in the United States, shared a long list of objects in which uranium was used as a colorant, dating back to the 1830s. They include, “egg cups […] beer mugs, candlesticks, bowls, drawer knobs, bell knobs, writing implements, tobacco pipes, perfume bottles, dishes and vases.” For a time, she noted, British and American dentists even used a uranium-based colorant in fake teeth.

After the discovery of radioactivity around the turn of the 20th century—and even as doctors and scientists became more knowledgeable about the potential health hazards of prolonged exposure—members of the general public sought out radioactive items. In 1934, Marie Curie, who discovered radium and studied its application in cancer treatment, died of an illness attributed to her extended contact with radioactive materials. But three years later, writer James A. Cowan still began an article in Maclean’s magazine on radium mining and production in Canada this way: “Radium, compared with which diamonds are cheap and gold is a commonplace metal, appeals to the popular fancy as approximately the most romantic substance known.” Later, he enthused about the potential of uranium pitchblende as a vegetable super-fertilizer.

Radium did have other practical applications beyond its use in cancer treatment. Watch hands and airplane dials coated with paint that included radium would glow in the dark. However, during the early 20th-century “radium craze,” various radioactive elements ended up in many household items in North America and Europe to which they added less obvious value. Companies produced radium-infused face cream and toothpaste, quack medical treatments like radioactive compresses, and a variety of irradiating pitchers like the Revigator.

Often the amounts were so infinitesimally small they presented little danger to the user. Even an object made from uranium glass generally poses little risk left sitting on a shelf. But exposure is cumulative, as illustrated by the gruesome death of Eben M. Byers, an extreme consumer of a bottled radium water product called RadiThor, in 1932. The Pittsburgh native’s demise prompted the U.S. Food & Drug Administration to finally start regulating radium products. The United States, Canada, and the United Kingdom held a meeting in Chalk River, Ontario, in 1949 to establish international standards for safe doses of radiation.

However, lots of objects are still at large that predate full comprehension of the impacts of radiation and the government regulations on their manufacture and disposal that followed. Institutions, like museums, may hold multiple radioactive objects, with the potential to deliver a higher cumulative dose of radiation exposure. (Besides man-made items, museums can also have geological samples with naturally occurring radiation).

The Ingenium, a consortium of three national museums located in Ottawa, has collected hundreds of artifacts with some level of radioactivity. Ultimately, the museum opted to store all of them together, in a small storeroom equipped with special sensors and ventilation.

“We make sure that the artifacts that we’re going to keep that are that high radiation are of the highest value to the Canadian story,” said Ingenium conservator Erin Secord. They include a scale used by Marcel Pochon, who studied with Curie before becoming the manager of Canada’s primary radium refinery in the 1930s. There is also a decommissioned shoe store x-ray machine, once commonly used to image customers’ feet. “The radiation generator,” Secord pointed out, is, “right by everybody’s key organs.”

Another device irradiated water for entertainment purposes. “People would drink radium water at parties and stand behind the screen and look at each other’s organs,” Secord said.

In deciding whether to acquire or keep objects, Secord’s team tries to balance their storytelling value with the risks of handling them. “Our collection is very much representative of the journey that Canadians have gone through with these changing expectations and understandings of health and safety and risk,” said Secord.

Radioactive decay, the natural process by which atoms transform into a stable state, can take thousands of years.

Manufacturers of early radioactive products, “weren’t thinking about the end user having to dispose of this responsibly,” said Rowe, the manager of HARP. Back when these objects were first made, Rowe said, “They were sort of these new, amazing chemicals that had all sorts of interesting and useful things that we can use them for. And then, the science caught up with it.”

Now, he said, “You can’t really then put it on, say, a little antique store to dispose of all these things that they’re stuck with that they had no idea about,” he said. In many cases, radio-luminescent objects don’t even emit a warning glow, not because they are no longer radioactive, but because other ingredients in the chemical reaction that makes the paint glow have degraded. The collection of these orphaned, historic objects fits more easily into government-scale clean-up efforts, like HARP, which retrieves such items from museums, private homes, and companies, such as those who work with vintage watches and airplanes, from across Canada. They will live out their days in storage facilities for radioactive waste, including those CNL maintains in Chalk River.

For items too hot to handle, the existence of HARP actually makes radioactivity one of the easier hazards to manage, said Secord. The Ingenium has turned over several items from the science and technology collection to HARP, including large and fragile camera lenses that contained thorium. Staff time in proximity to the items that remain at the museum is limited, to reduce cumulative exposure.

But Secord also manages objects containing asbestos, PCBs, and other chemicals whose risks to human health have only become apparent over time. For instance, moving the science and technology collection to a new location has required Secord to undertake the challenging task of finding disposal methods for materials like banned refrigerants in old cars.

“I don’t try to scare people by being like we are the museum of things that’ve killed Canadians by not paying attention to them,” Secord joked. “But not when you’re here,” she added quickly. “When you’re here, you’ll be fine.”

Inside the two-decade-long effort to restore the mansion’s colorful frescos.
paintings

An X-ray offers a glimpse into the painter's early years.
museums

The monstrous menace known as Whatcheeria hints that our distant ancestors may have been more like us than we thought.
Video