Why Were These Mysterious Stone Orbs Stashed All Over Neolithic Britain? - Atlas Obscura
Want to see fewer ads? Become a Member. 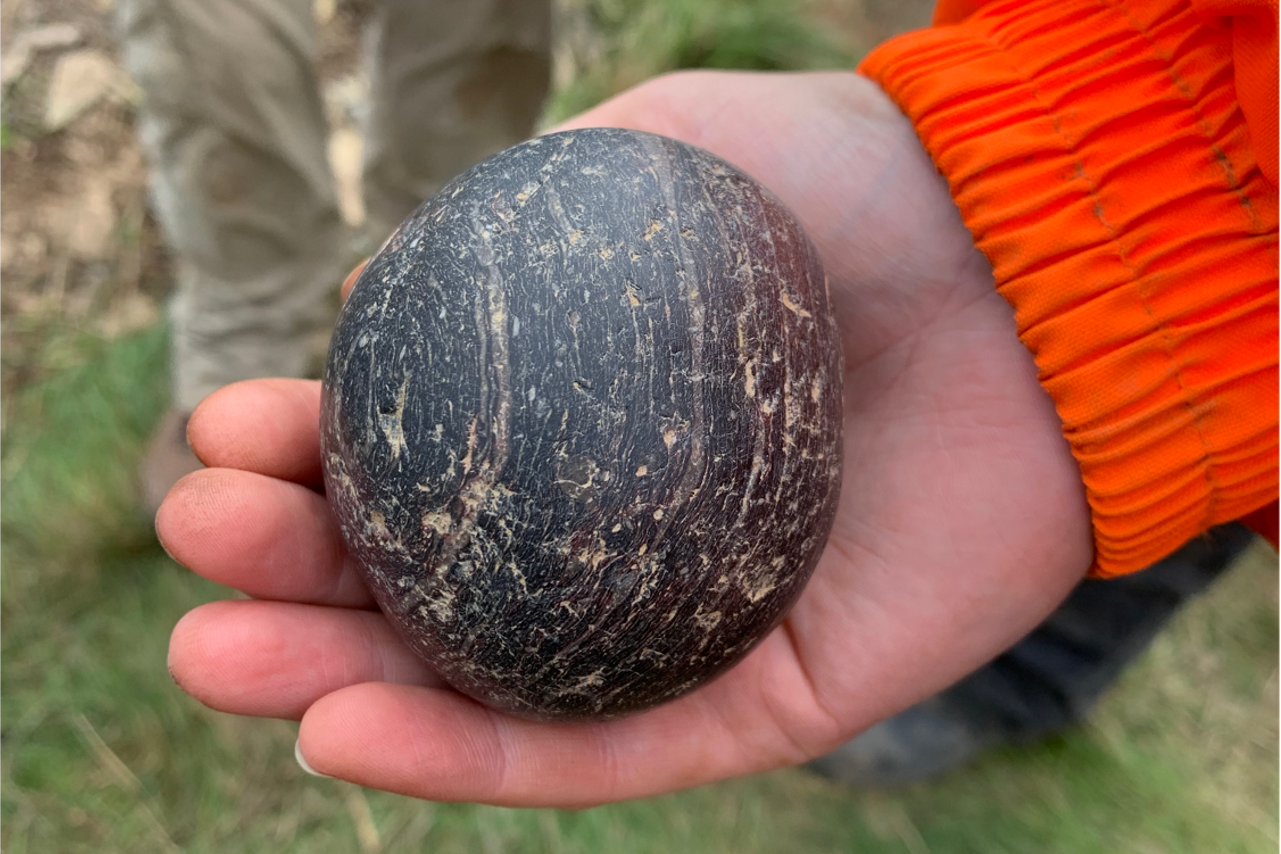 Two of these polished stone balls were found in a Neolithic tomb on a remote Scottish island. Mike Lawlor
In This Story
Destination Guide

If you sail to the island of Sanday in the Orkney archipelago in northern Scotland, you’ll see the silhouettes of neighboring islands on the horizon. Upon arrival you’ll see white, sandy beaches that trail into rough, once-agricultural terrain, and experience its erratic weather—sun then fog then rain then clear skies all in the same day. Nestled there, on a shallow cliff, is a mound of earth and rocks: a prehistoric tomb dating to around 3500 B.C.

The tomb sits on a low-lying peninsula, where growing storms and agitated seas are eroding it away. So, in August and September 2021, a group of archaeologists made their way there, to Tresness, the site of that lone Neolithic tomb, with their sights set on excavation. The research team was anxious to study the tomb before it was lost; it contains a single chamber, presumably for someone important.

“What we discovered was an exceptionally well-preserved monument,” says Hugo Anderson-Whymark, a curator of prehistory at National Museums Scotland who co-led the research. There were no remains, but inside the monument were a couple rare finds: two polished stone balls, each about the size of a tennis ball.

The other leading archaeologist of the excavations, Vicki Cummings of the University of Central Lancashire, unearthed both of the orbs herself. With the first, she remembers pulling her trowel back and immediately noticing that something was different. “It was really exciting,” she says. “I said after the first one, ‘I’ll never find anything like that ever again in my career,’ and then I found another one. It’s very rare that you would find two such amazing objects, it was incredible.”

But these two balls aren’t exactly a unique find—they’re part of a widely distributed mystery left by the Neolithic inhabitants of the British Isles. More than 500 stone balls like them have been discovered to date. For centuries, no one paid them much attention. Farmers or builders would randomly discover them in fields, and then either keep them or donate them without another thought. It wasn’t until archaeologist Sir Daniel Wilson published illustrations of the orbs in 1851 that people began to take notice. “Suddenly you saw, from 1850 onwards, lots of them coming out the woodwork,” says Anderson-Whymark. “There were about 100 known by the early 20th century.” But because of the way that many of them were found—without archaeological context—scholars didn’t know where most came from. That’s why Cummings was so floored by what she found. Discovering not one but two, in their original location in a tomb, is incredible—only a few have ever been found in their original context. Also, most of the 20 balls that have been found in the Orkney Islands are carved and etched with patterns and designs. These, on the other hand, were polished smooth.

The most famous of all of these artifacts is the Towie ball. This whimsically named object is an ornately carved, lobed orb discovered in northeast Scotland in 1860, and likely had some deep cultural meaning to the people who made or handled it some 5,000 years ago. Other stone orbs are covered in little stud-like projections. National Museums Scotland has 3-D models of some of them. Anderson-Whymark says they’re “some of the finest examples of Neolithic art.”

The smooth and carved stone balls are part of different but related Neolithic traditions, says Anderson-Whymark. The few examples of polished orbs tend to be found along the west coast, appear to be older, and are usually associated with graves. The carved balls, on the other hand, are more common in the east, are from later parts of the Neolithic, and are found in settlements. But the decorations on them often match decorations found on other types of artifacts at grave sites.

No one knows exactly what the stone balls are for. Anderson-Whymark says there have probably been 25 to 30 theories over the years: weights and measures, or weapons, or tools for winding nets and braiding ropes. The theory he and Cummings support is that they were markers of status and importance.

The sheer amount of time, effort, and care it would have taken to create a stone ball, even just a plain polished one, says Cummings, attests to the status they must have carried. But it’s also likely their meaning and use evolved over time.

“I think the answer is, if you have one fixed idea for what these were used for, then it’s probably not going to prove to be right, because we’re dealing with objects that were used over several hundred years,” says Anderson-Whymark. Plus, they’ve been found all over the British Isles, “So they might have been used in different ways in different places.” But regardless of where you look, they clearly meant a lot to the communities who had them, he says.

People are fascinated with the stone balls, says Cummings, because “they seem both tangible and intangible … familiar and unfamiliar all in one go.” They are beautiful, tactile, and heavier than people think, and people become mesmerized when they touch them today. “People in the past seem very tangible, they seem very knowable,” Cummings says. “But actually, when you start to study the kind of things they get up to, they are very, very strange—they are almost alien in their differences from us nowadays.” The stone balls capture that difference, with just the right combination of the mundane and the mysterious.

They may have more to do with the sun than with arachnids.
art

Found: A Rare Carved Stone That Could Rewrite Art History

A miniature masterpiece from the Greek tomb of the "Griffin Warrior."
mystery

A scholar of Aegean civilization considers the inscrutable meaning of the artifact—and its irresistible appeal.
archaeology

The United Kingdom is experiencing a revival of interest in an ancient burial method.
Video • Wonder From Home