One Artist's Mission to Illustrate All the World's Mythical Beasts - Atlas Obscura
Want to see fewer ads? Become a Member. 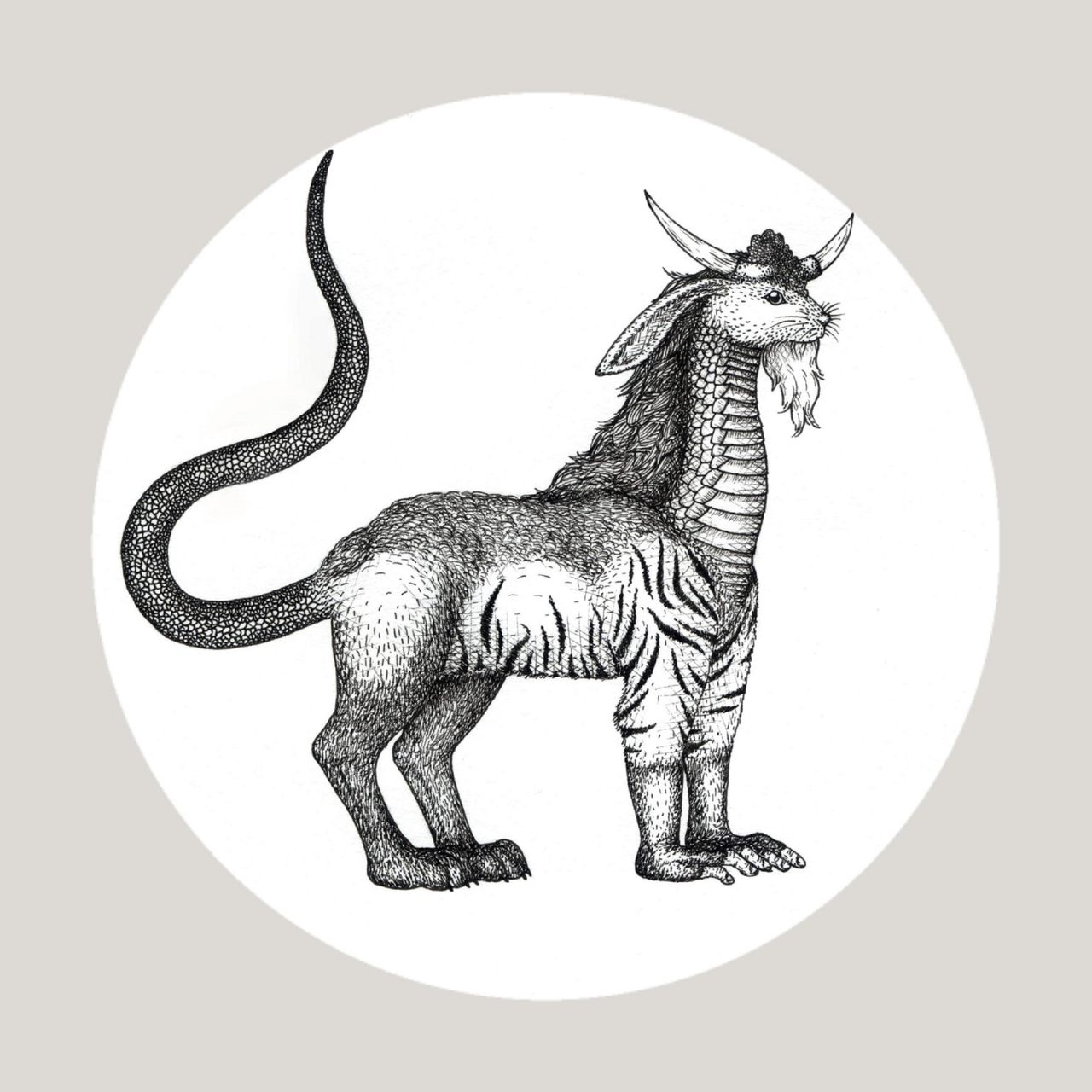 A Kotobuki, a creature consisting of all 12 signs in the Zodiac, from Japanese mythology. All Images: Iman Joy El Shami-Mader

Every culture has its own distinctive mythological beasts. In Brazil, there’s the Headless Mule, a cursed creature whose decapitated head hovers above a fire-spewing neck as it gallops across the country. From Japan, the Kotobuki is a Zodiac Frankenstein’s monster: it consists of all 12 signs, from the nose of the rat to the tail of the snake. Peru has the Huayramama, which looks like a vast snake plus the billowing hair and face of an old woman.

With such rich and broad source material to draw from, the artist Iman Joy El Shami-Mader has lately been pursuing one very particular goal: she wants to illustrate as many mythical beasts as she can find. Since October 2017, El Shami-Mader has been illustrating one such creature a day, which she then features on her Instagram account. To keep up a steady supply of beasts to draw, El Shami-Mader initially worked from books. “It all started with the book Phantasmagoria—which is great—but there are many creatures that are only mentioned in passing or without any description at all,” she says. So she ordered more books, researched online, and tried her local library. “I’m from a tiny town in the Alps, so other than local creatures, there was little to be found.”

Lately she’s decided to try to crowdsource ideas to keep her project going. Through Instagram, she’s asked her followers to send stories and descriptions of mythical beasts she’s still missing. Her illustrated bestiary now spans mythologies from around the world and across a variety of time periods, and even includes the odd fictional character (she has a porg from Star Wars: The Last Jedi and an Owlbear from Dungeons & Dragons).

Atlas Obscura spoke with El Shami-Mader about her project, the challenges of depicting mythical creatures, and the appeal of the lovable Squonk. If you’d like to suggest a creature, email her at mythical.creaturologist@gmail.com.

Where did the idea for this project come from?

It actually started as a stress-relief strategy and ‘self-challenge’ last fall. I was working five jobs and felt extremely drained and worn-out all the time. I really needed something to balance out the lack of creative expression I was feeling and to get my mind off things, at least for an hour a day.

A few years back I did a series of fairytale illustrations and came across many amazing creatures, like the Bøyg in Per Gynt. Since I always wanted to deepen my knowledge about these creatures, I ordered the book Phantasmagoria by Terry Beverton and it arrived on my doorstep on September 30, just in time for me to begin a daily monster-drawing challenge I’d set myself for the month of October. I started to use my lunch breaks to have a quick snack and do a drawing of a creature each day. I was fairly sure I would give up after a week, but it really helped with the stress; for an hour or two each day, all that was on my mind was bringing a creature to paper, nothing else. It was also great to learn about a new monster each day, so when October was over, I didn’t really want to stop.

I am generally a history buff and I love fairytales, sagas, myths and legends. In this already pretty epic realm, these beasts feel even more magical. I find them extremely interesting for so many reasons. They can give you an incredible insight to different cultures—what people were afraid of, and what simply was inexplicable at the time and needed to be put into a physical form. I feel like they also show humanity’s need to have a reason for both good and bad things happening. Sometimes they are a ray of hope, the only thing able to cure an incurable illness; other times they bring plagues and death. They are wise helpful spirits, and they are malicious tricksters. It can also be really funny—you can tell that some only exist because of the bad descriptions the scholars wrote down.

Tell us a little bit about how you research and plan how these illustrations will look.

When someone tells me about a new beast, I still try to do as much research as possible and find the best description available, either on the internet or by asking more people from that region about their version of it. Sometimes the descriptions are very detailed, which makes it easy to come up with a general idea of how proportions and form should be; other times it just says “aquatic creature” or that it has “serpentine appearance,” which makes it harder on one hand, because you cannot depict them “accurately” (as far as drawing a mythical creature can be, anyway), but on the other hand really lets your imagination run wild. I usually have an image in my head of how I’d like it to look. I start by slowly sketching out the first lines in pencil, then elaborate them a bit, and when I’m happy enough with the results I start tracing my pencil drawing with ink pens.

What’s the goal of this project?

Well, I’ve ‘tasted blood’ now, and am on a mission: I would love to create a complete illustrated bestiary. There are many great books on creatures out there, but so far I haven’t found a complete one. I know this is a Sisyphean task, but I’m motivated. I’d love to turn my findings into a book, or—even better—a series of books that can be continually expanded. For now there is only an idea, but a friend of mine is a composer and we were thinking of collaborating on a trilingual ‘monsters set to music’ book. My current priority, however, is finding as many mythical creatures as possible.

Tell us about your favorite mythical creatures in this project.

That is really hard to answer—they are all so unique. I love the Dijiang, because I feel it’s my spirit animal (living in a perpetual state of confusion, but fond of singing and dancing). I love the idea of a Valravne eating a king’s heart and thus gaining human knowledge and becoming evil (eating another human’s flesh was really thought to give you his strength at some point in history!). I think it’s amazing that the Chouyu falls asleep when it sees people, and that the Ovinnik holds a grudge against barns, but is appeased by pancakes.

But if I had to choose a favorite one, it would have to be the Squonk, a creature from the forests of Pennsylvania, who was always sad over its hideous appearance. All the love for the Squonk!

The challenge of capturing something almost impossible to see.
islands

Lucas Bustamante wants you to fall in love.
Video • PinDrop