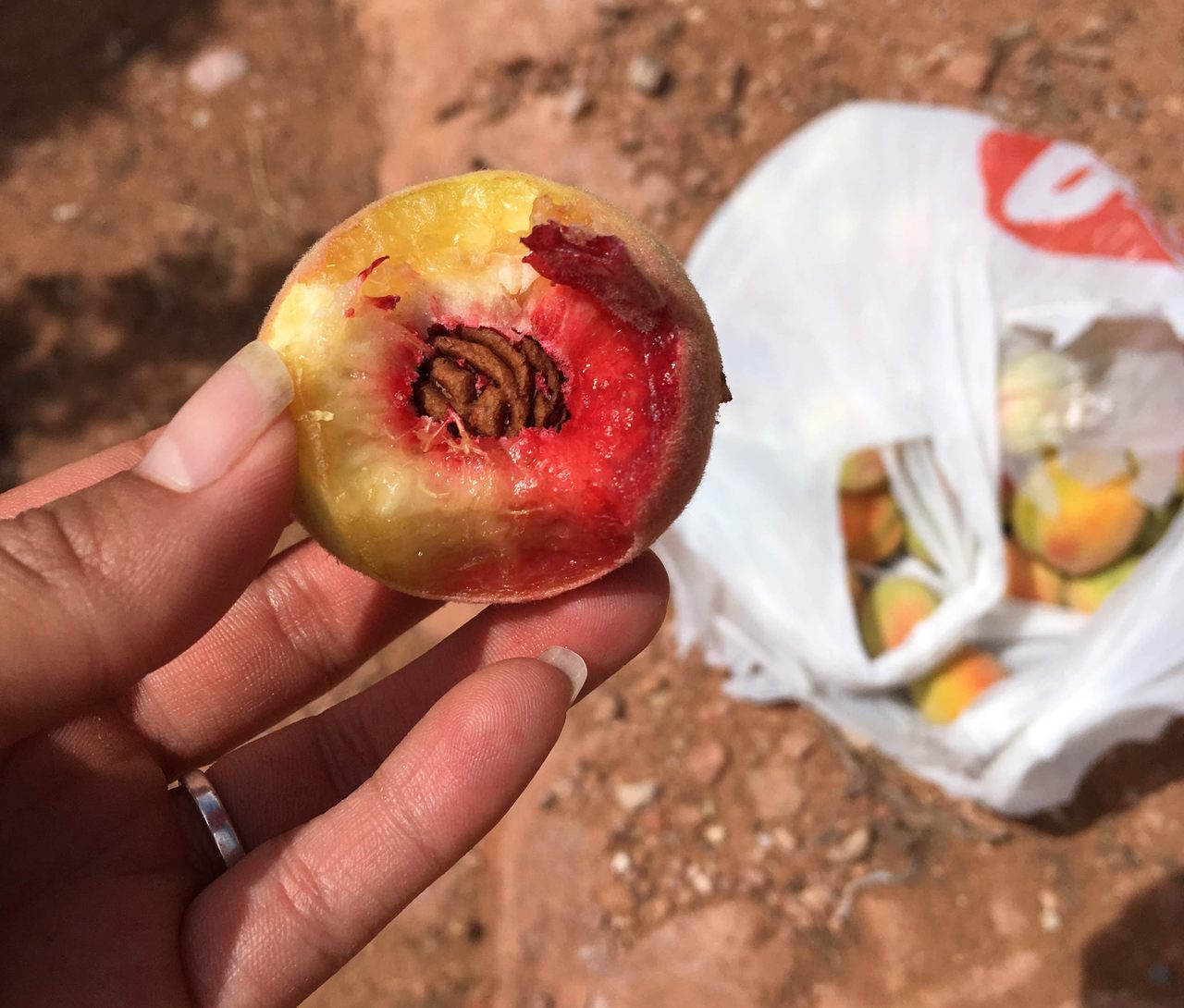 These small peaches once flourished widely over the Southwest. Courtesy of Reagan Wytsalucy
In This Story
Destination Guide

Reagan Wytsalucy grew up in Gallup, New Mexico, just outside the Navajo Nation reservation. Despite her Native heritage, she grew up “very absorbed into westernized culture,” she says. Her father owned several McDonald’s franchises on the reservation, and she never learned to speak the language. It wasn’t until she started to study plant sciences in college that her father told her about the peaches that once thrived on the reservation where he grew up.

Centuries ago, the Navajo people tended flourishing peach orchards across the Four Corners area, where the states of Utah, Arizona, New Mexico, and Colorado meet. But in 1863, the U.S. government ordered the Navajo in Four Corners to leave their homelands.

When the Navajo refused to leave, General James H. Carleton ordered Colonel Christopher “Kit” Carson to slaughter their livestock, massacre any resistors, and burn their crops, notably their thousands of peach trees. One American troop, under the command of Captain John Thompson, claimed to have destroyed more than 3,000 peach trees. Thompson himself reported how his men, in a single day, cut down what he called 500 “of the best peach trees I have ever seen in the country, every one of them bearing fruit.”

The destruction nearly spelled the end of centuries of cultivation. In fact, Native Americans across the Southwest once grew vast peach orchards, some stretching all the way into the Grand Canyon. Scholars believe that the Pueblo communities in the Southwest were the first to receive peach seeds from the Spanish in the Rio Grande Valley. Appreciation for the fruit was widespread, and the plants passed from tribe to tribe, in many cases far in advance of any contact with European settlers.

Faced with the destruction of their orchards and starvation on the horizon, many Navajo surrendered during the winter of 1863 and were forced to march in the “Long Walk.” This trek, of nearly 400 miles through the harsh desert in frigid winter weather, ended at Bosque Redondo, an internment camp on a bleak, wind-swept prairie in eastern* New Mexico. There they were meant to live and eventually assimilate into American culture. But due to poor water, rampant disease, and insufficient agricultural conditions, Bosque Redondo was deemed a failure by the U.S. Government in 1868. Thus, many Navajo made the brutal trek back home.

Not all Navajos went on the Long Walk. One particular holdout, Chief Hoskininni, secreted himself and others in one of the most remote corners of the Southwest. Not only did he successfully evade capture, he also played a pivotal role in helping re-establish the local Navajo community. According to Wytsalucy, Hoskininni gave farmland and animals to each family when they returned so they could rebuild their lives. Wytsalucy herself is a descendant of Hoskininni. According to family lore, part of the reason he was able to survive was because of the fruit trees hidden deep within the canyons.

Wytsalucy’s journey to discover what was left of these orchards began in college. When she told her father about how she didn’t know what to study, he encouraged her to research local, fast-disappearing traditional foods, which for the Navajo include their precious peaches.

As a graduate student in 2016, Wytsalucy set out into the Navajo reservation with her father and two Utah State University horticulture professors. The goal was to track down, record, and collect seeds from the ancestral peach trees in the area, based on her father’s memories of where he saw them growing as a child.

The most common peaches grown by Native Americans in the Southwest were white-fleshed, free-stone, and notable for their small size. Unlike traditional orchards, trees were not pruned and irrigation practices were limited. One Hopi elder told her that pruning the trees was traditionally frowned upon. “Those seeds, just like the corn plant, are revered as our children,” she recalls them saying. In the old days, peaches were eaten fresh or boiled, and when harvests were bountiful, they were dried in the sun and stored in masonry bins or stone cavities.

It took three years for Wytsalucy to receive her first peach seeds, handed to her by an 85-year-old woman in Canyon de Chelly, a lush collection of gorges in northeastern Arizona in the Navajo Nation. Encouraged by that first success, Wytsalucy kept knocking on doors all over the Four Corners area. Eventually, she tracked down eight more orchards.

Genetic analyses show that these peaches are significantly different from modern cultivars. According to Wytsalucy, that persisted despite the U.S. government’s efforts to provide new peach trees to Native people in the late 19th century. Instead, many of the elders kept the seeds from the government and the traditional peaches separate from each other—they didn’t want them to mix.

Many of the peaches Wytaslucy tracked down in the Four Corners area are currently growing wild, without any human interference. They’re smaller than modern cultivars, about the size of a large apricot. The skins are mostly green with a slight red tint. As for how they taste, says Wytsalucy, “they have a tart peel and are very sweet inside,” and “a muskmelon flavor.” Nutritional analyses show that they are higher in calories and have more calcium, fiber, carbohydrates, and total fat than standard peaches.

Wytsalucy’s work with the peaches has gone well beyond just preserving seeds and planting trees at research sites across Utah. She’s also working to record stories and traditions of peach-growing from elders across the Navajo, Hopi, and Zuni tribes. Much of this knowledge is in danger of being lost as elderly members of these communities pass away.

Many elders told her that the old orchards were managed with little supplemental irrigation. Only young trees were watered. Farmers planted their orchards on mesa shelves and in canyons, where the runoff from mesa tops would flood and irrigate them during summer monsoons. Climate change has added a new urgency to Wystalucy’s project. Nowadays, extreme drought in the Southwest will likely hasten the loss of these trees, although preliminary research has shown the Navajo peach trees are more drought tolerant than commercial varieties.

Wytsalucy’s father is also using his childhood memories to help restore Native foodways. Like many Navajo children of the 1960s and 1970s, Wytsalucy’s father, Roy Talker, was taken away from home by the Indian Student Placement Program. Only eight years old, Talker was placed with a family in Snowflake, Arizona. Wytsalucy believes that the enduring trauma her father experienced from being caught between two cultures is one of the reasons why she herself was never taught how to speak the Navajo language.

He did well for himself and for his family by becoming a businessman, but Wystalucy says her father has some regrets about bringing fast food to the reservation. Today, Native Americans have some of the highest rates of diabetes in the county, and fresh produce is often more expensive and harder to come by in rural communities.

Wytsalucy also says that her research has had the unintended side effect of bringing her closer to her father, especially as he shares his memories about growing up on the reservation. “It’s been a really great experience for our family,” she says, “and it helped tie me back into who I am as Navajo.”

After graduating with her Master’s Degree in Plant Science in 2019, Wytsalucy took an Assistant Professor position with the Utah State University Extension in southeastern Utah ​and got right to work on restoring old peach varieties. Currently, Wystalucy is working with community gardens throughout the Four Corners region to produce peach seeds for Native communities and provide resources for individuals wanting to grow them. She’s also collaborating with Canyon de Chelly National Monument and Capitol Reef National Park to preserve Native peaches, as a way to honor the parks’ rich Indigenous histories.

She’s also researching their unique genetic traits with her advisor, Utah State University professor and Extension fruit specialist Brent Black. Black is especially interested in whether or not they could be used as a rootstock and grafted with modern cultivars. “That way, they could potentially provide drought-tolerant characteristics in more conventional peach production systems in arid climates,” says Black.

For Wystalucy, though, the project remains a deeply personal testament to how, despite the U.S. government’s efforts to eradicate both the Navajo people and their peaches from the Four Corners area, both remain deeply rooted in the region today. Now, all that’s left is for those roots to spread. “My hope is that these trees will be able to be returned to the homeland in an abundant form,” says Wytsalucy. “And that they will become a bountiful food resource in our communities again.”

Which trees will live and which ones will die?
science

Thank these repositories for new and improved citrus, avocados, and more.
Video