How a Baby Tooth and Soot Rewrote the Story of Humans in Europe - Atlas Obscura
Want to see fewer ads? Become a Member. 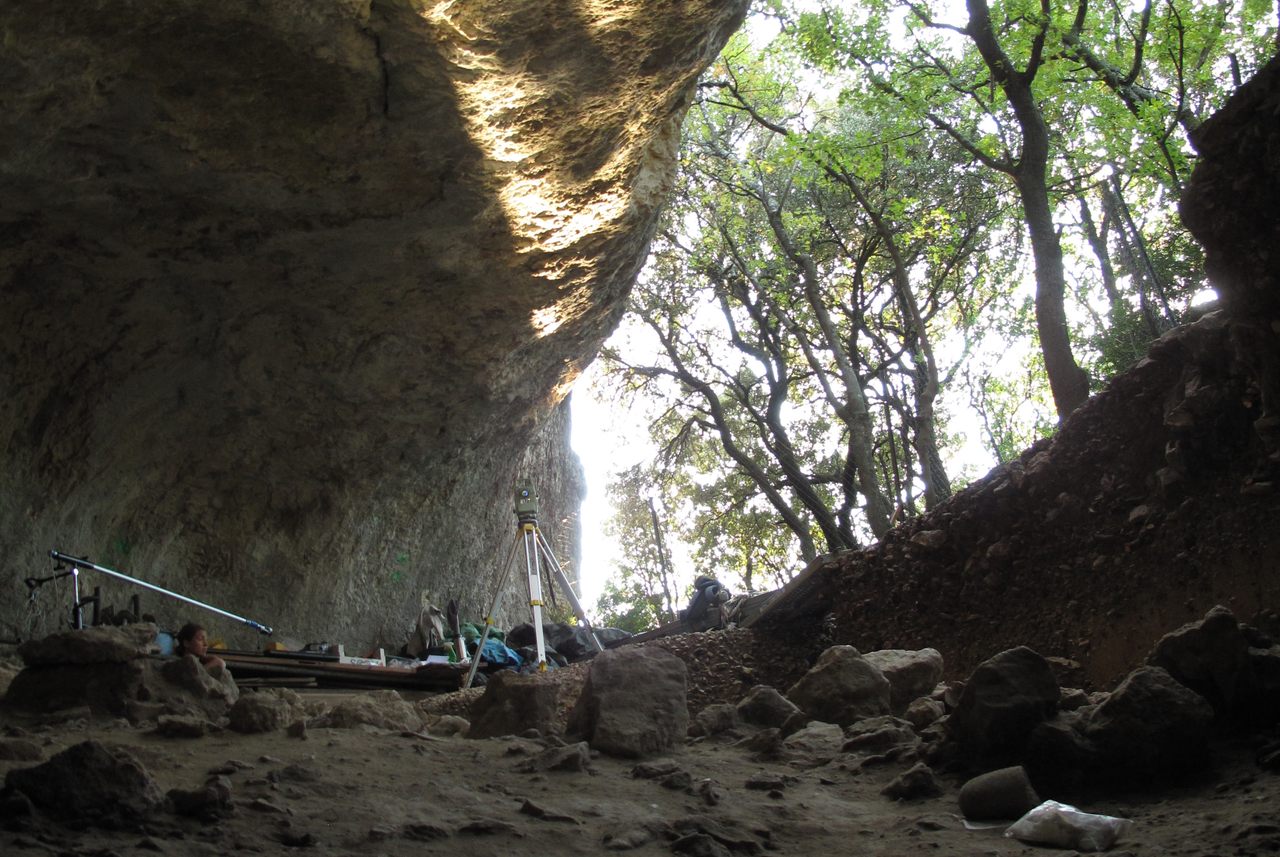 Perched about 325 feet (100 meters) up the slopes of the Prealps in southern France, a humble rock shelter looks out over the Rhône River Valley. It’s a strategic point on the landscape, as here the Rhône flows through a narrows between two mountain ranges. For millennia, inhabitants of the rock shelter would have had commanding views of herds of animals migrating between the Mediterranean region and the plains of northern Europe, today replaced by TGV trains and up to 180,000 vehicles per day on one of the busiest highways on the continent.

The site, recognized in the 1960s and named Grotte Mandrin after French folk hero Louis Mandrin, has been a valued location for over 100,000 years. The stone artifacts and animal bones left behind by ancient hunter-gatherers from the Paleolithic period were quickly covered by the glacial dust that blew from the north on the famous mistral winds, keeping the remains well preserved.

Since 1990, our research team has been carefully investigating the uppermost 10 feet (3 meters) of sediment on the cave floor. Based on artifacts and tooth fossils, we believe that Mandrin rewrites the consensus story about when modern humans first made their way to Europe.

Human origins researchers have generally agreed that between 300,000 and 40,000 years ago, Neanderthals and their ancestors occupied Europe. From time to time during that period, they had contact with modern humans in the Levant and parts of Asia. Then around 48,000 to 45,000 years ago, modern humans—essentially us—expanded throughout the rest of the world, and Neanderthals and all other archaic humans disappeared.

In the journal Science Advances, we describe our discovery of evidence that modern humans lived 54,000 years ago at Mandrin. That’s some 10 millennia earlier than our species was previously thought to be in Europe and over a thousand miles west (1,700 kilometers) from the next-oldest known site, in Bulgaria. And fascinatingly, Neanderthals appear to have used the cave both before and after the modern human occupation.

The first curious finding to emerge during the initial decade of Grotte Mandrin excavations were 1,500 tiny triangular stone points identified in what we labeled Layer E. Some less than half an inch (1 cm) in length, these points resemble arrowheads. They have no technological precursors or successors in the 11 surrounding archaeological layers of Neanderthal artifacts in the cave.

Who made them? A handful of other sites in the middle Rhône Valley also contain these tiny points. But those sites were excavated long ago with pickaxes, making it hard to tell whether the points showed up abruptly or gradually over time, perhaps with Neanderthals having developed the methods to make them. In 2004, one of us, Ludovic Slimak, named this distinctive tradition “Neronian” after the nearby site where such tiny points were first excavated.

Without more local sites for comparison, two of us, Laure Metz and Slimak, looked to a region where modern humans were definitely living by 54,000 years ago: the Eastern Mediterranean. In particular, the site of Ksar Akil near Beirut preserves what may be the longest and richest Paleolithic record in all Eurasia.

Our analyses of the stone artifacts from Ksar Akil show a similarly aged sediment layer with tiny points of the same size and made in the same technical traditions as those of Mandrin. This similarity strongly suggested that the Neronian artifacts were made not by Neanderthals, but rather by a group of modern human explorers who entered the region much earlier than we had expected.

The final piece of the puzzle came in 2018, when one of us, Clément Zanolli, analyzed the nine hominin teeth we’d found throughout the different layers during excavation. Through painstaking analyses using CT scans and comparisons with hundreds of other fossils, we were able to determine that the Mandrin E tooth, a single baby tooth from a child between 2 and 6 years of age, came from an early modern human and cannot be from a Neanderthal.

Based on the stone point technologies and their contexts in other sites, along with this fossil evidence, we conclude that the makers of the Neronian points in Grotte Mandrin were modern humans.

But the discoveries from Mandrin don’t stop there. Throughout the site’s layers there are fragments of the shelter walls and roof that have fallen off and been buried with the fossils and artifacts.

When Neanderthals and modern humans made fires in the site, the smoke would leave a layer of soot on those surfaces. Then the following season a thin layer of calcium carbonate called speleothem would cover it over. This cycle was repeated over and over.

We first discovered these sooted vault fragments in 2006, and the team recovered thousands, year after year, in every archaeological layer of Mandrin. A decade of work by team member Ségolène Vandevelde has shown that these patterns can be read like tree rings to tell us with what frequency and duration the groups visited the site, demonstrating that human groups came to Mandrin some 500 times over 80,000 years.

Vandevelde was then able to determine how much time separated the last Neanderthal fire from the first modern human fire in the cave, showing that it was only a maximum of a year between Neanderthals using Grotte Mandrin and modern humans moving in.

After the modern humans occupied Mandrin annually for some 40 years, one or two generations, they disappeared just as quickly and mysteriously as they had appeared. Neanderthals then regularly reoccupied Mandrin over the following 12,000 years.

How did these modern humans arrive so early in Western Europe? Archaeological evidence from Australia shows that modern humans reached that continent by as early as 65,000 years ago. Of course they would have needed a boat to cross the open ocean to get there. It therefore isn’t a stretch to assume that people in the Mediterranean had access to boat technologies 54,000 years ago and used them to explore along the coastlines of this contained sea.

We know from the source locations of the flint used to make the artifacts in Grotte Mandrin that both Neanderthals and modern humans roamed widely, about 60 miles (100 km) in all directions around the site. How did the modern humans learn about all these stone resources over such a large, varied landscape in such a short time? Did they have relationships with the Neanderthals, who could have exchanged information or acted as guides? Was this a moment when the two groups interbred? Our ongoing work at Mandrin will shed light on these and other questions about our earliest ancestors in Europe.

The Carnivore Paradise That Keeps Changing the Story of Human Evolution

New research at Dmanisi continues to challenge what we think we know about our deep past.
science

257 small steps for our human cousins, one giant leap for paleoanthropology.
science

The self-taught naturalist found a site that would transform scientific views about Native Americans in North America.
science

In a region central to the study of human evolution, a new program focuses on training more African students.
Video • Wonder From Home