The 6,000-Year Story of the Negev Desert Is Etched in Stone - Atlas Obscura
Want to see fewer ads? Become a Member. 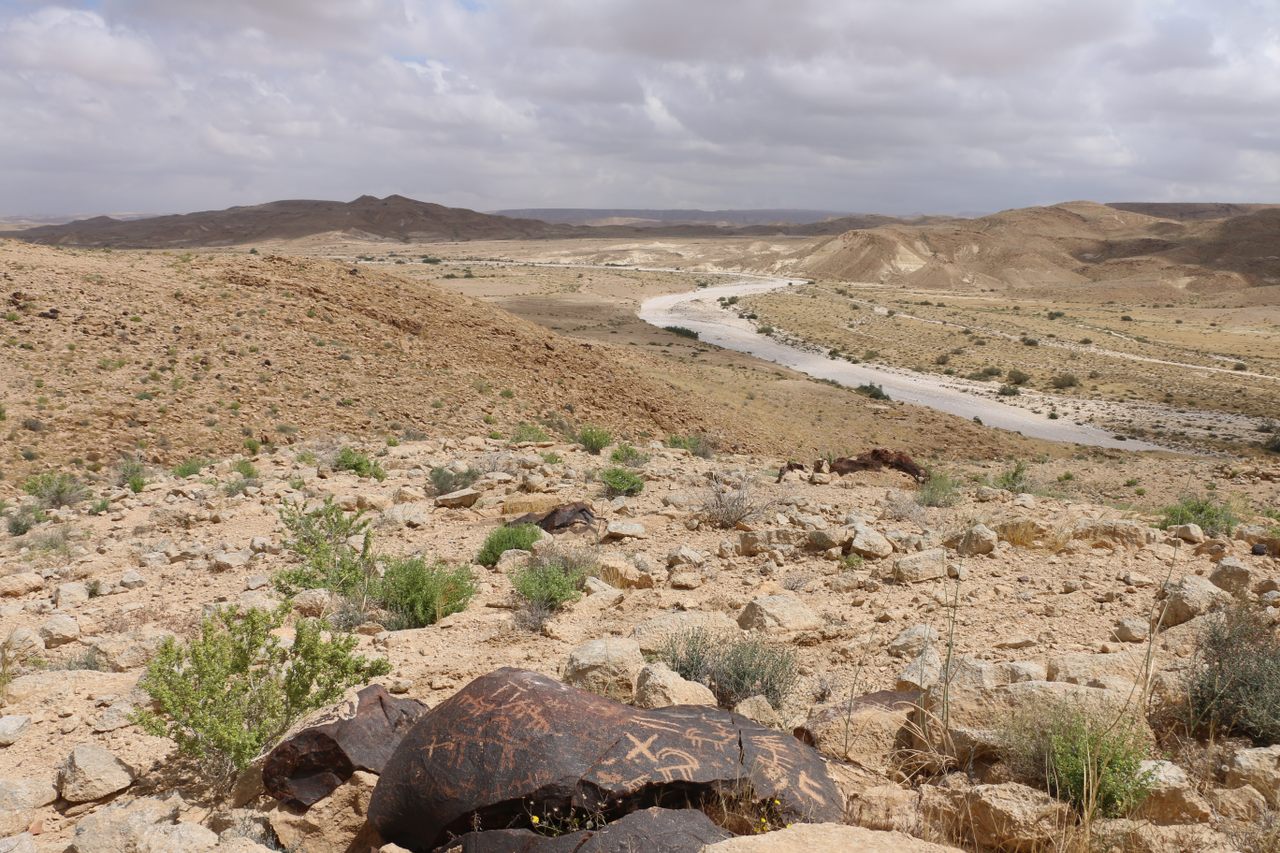 Rock art stand out distinctly on the dark, patinated rocks of the Negev Desert. Courtesy Lior Schwimer
In This Story
Destination Guide

Lior Schwimer first discovered the world of Negev Desert rock art one summer 10 years ago. “I was preparing for a lecture,” says the archaeologist of the Southern District at the Israel Nature and Parks Authority, “and decided to take another look at a rock I’ve seen before, with an ibex carved on it. I went into a small valley and saw some rock carvings. I continued walking and saw a few more, not many.”

Then he followed the valley, known as Nahal Le’ana, as it curved. “I found myself on a slope with hundreds of rocks, each one carved with symbols, figures, inscriptions, and shapes of dozens of different hues and patterns,” he recalls. “I wandered between the rocks and felt like I just opened an invisible door to a giant library in the middle of the desert.”

The Negev holds thousands upon thousands of rocks adorned with carvings, sometimes in isolated sites such as Har Karkom, and sometimes in the midst of modernity. Har Mihya Park, for example, is a hill covered with rock piles carved with ancient ibexes and camels. Down one side, a visitor can see the flesh-and-blood camels, tin shacks, and canvas tents of the Bedouin Yahala Desert Camp, and on the other side, the guest huts of Aurelia Farm. Not far from there, Carmey Avdat Farm produces chardonnay and merlot.

The window of Negev rock art opens onto the cultural and spiritual world of people who have lived in the desert—hunters, shepherds, itinerant merchants—since at least the fifth millennium B.C. and through the modern period. It’s one part history book, one part art gallery—the story of people in a place, written and drawn on the landscape itself.

“The carvers hold a dialogue with each other over millennia,” says Davida Eisenberg-Degen, an archaeologist with the Israel Antiquities Authority who studies the carvings. “We see how people from different periods paint inside older carvings, or add symbols and animals beside them. We guess this is an act that expresses identification, belonging, and familiarity.”

“On the other hand,” says Schwimer, “we also see negative interactions. We discovered many carvings where daggers, considered a token of identity, were erased. Erasure is an act of protest. It is possible that the ancient Negev was controlled [for a time] by copper merchants. After they left, tribes took over and erased the identity markers of their oppressors. In any event, this is a conversation taking place over 6,000 years.”

What makes the desert such a unique canvas are the rocks themselves. They are covered with a thick, dark patina, formed as the surface interacts with oxygen, water, and sunlight. The researchers have studied the surface with X-ray fluorescence to examine its mineral and chemical properties. “There are bacteria in the rock,” Schwimer explains. “They adsorb iron from the rock and manganese from the dust in the air, and fix them.

“If you peck on the patina with a sharp tool, you find limestone underneath,” he adds. “Many peck points create a carving.” Scientists can examine the manganese of the patina to date it, but it’s also easy enough for a visitor to guess at the relative age of a carving by how dark the patina on the carving itself has grown. The darker the carving looks, the older it is, which can make it difficult to interpret the oldest of the carvings.

“The oldest drawing we found is a carving of ibexes from the Early Bronze Age. The older the carving is, we see a richer and more detailed artistic world. Drawing was a ritual activity at this point, the carver was trained for it, and the tribe assembled specifically to witness it,” Schwimer says. “[Later] carvings were made by copper merchants who rode down from Mesopotamia, Bahrain, or Jordan to Egypt. A carving of an ox or a lion, [animals] which never existed here, is made by a Mesopotamian or an Egyptian merchant, and indicates the approximate path of the copper trading route. Later we see carvings made by Roman soldiers, or a shepherd who randomly passed by and wanted to leave his mark.”

“Over the last few centuries, it was Bedouins,” says Eisenberg-Degen, who has mapped these more recent Bedouin works. “Bedouin tribes crossed the desert from the east, the west, and mainly the south, and the carvings they left show us how Bedouin culture has changed: In earlier times a Bedouin tribe was a collective, and its symbol appears identical in carvings from the same period. During the agricultural period, some groups became more segmented and started to work separate plots. The symbols of the tribes also branched out. The symbol of the Azazme tribe, for example, appears initially as an arrow. Later the arrow has a longer horizontal line, or looks like a door with a long lintel.”

The oldest carvings depict animals, which had spiritual significance related to hunting and fertility. As a motif, the most common among them, the ibex, persists up until current times. “It is always a male ibex and almost always in heat, and it appears in areas in the desert where ibexes never lived,” Schwimer says. In certain mythologies, animals such as ibexes taught survival skills to humans, and some served as spiritual guides. Uzi Avner, a veteran researcher from the Dead Sea and Arava Science Center, suggested that the ibex symbolizes the circle of life and death, perhaps as a deity that dies and is resurrected, and is also related to rain and fertility.

Approximately 8,000 years ago, humans started to domesticate goats in the Negev, and the regional shepherd culture was born. According to Schwimer, “the domesticated camel first appeared in the Negev during the Iron Age, and carvings of camels start to appear during this time. Next, we start seeing horse and donkey carvings.”

“So far I reviewed almost 15,000 panels with more than 50,000 carvings,” says Schwimer, who is in final stages of his doctoral research. In general, he focuses on the carvings of human figures. Historically, these examples appear after the first animal carvings, and in hunting scenes or raising their hands to the sky. In Byzantine-era carvings they might depict a person carrying a cross or holding a chalice.

During the early Islamic period, due to the prohibition on human representation, the desert fills with camel carvings, etched tribal symbols, and written inscriptions. According to Eisenberg-Degen, most Bedouins who reside in the Negev today can’t recognize the ancient tribal symbols on the rocks, but still continue the great tradition of Negev carvings—a tradition that has always reflected the world around it.

“We found carvings of a Volkswagen Beetle and a jeep from the 1950s,” she says. “There are airplane carvings next to an air base, carvings of hearts and board games. There are inscriptions in Arabic, and some in Hebrew and English—all made by Bedouins. Over the last 50 years you can also see carvings made by women, who, like the male shepherds, started to add their names.

“As archaeologists, we usually uncover buried findings, and our job is to understand what period are they from and what they were used for,” she continues. “On the other hand, when we study carvings, we understand just what happened in that moment. We see where the person sat, what they were looking at, and what were they thinking about at that very moment.”

Pack your snowshoes and see the Centennial State like never before. We hand-picked a collection of unique Colorado destinations transformed by glistening frost and white snow.
Sponsored by Visit Colorado
science

Researchers use art and ancient bones to make the case for modern lions once freely roaming Southeastern Europe.
science

The famous Cerne Abbas Giant gets a new birthday thanks to a novel approach for estimating the geoglyph's age.
deserts

The Spring House had been hidden for decades.
List