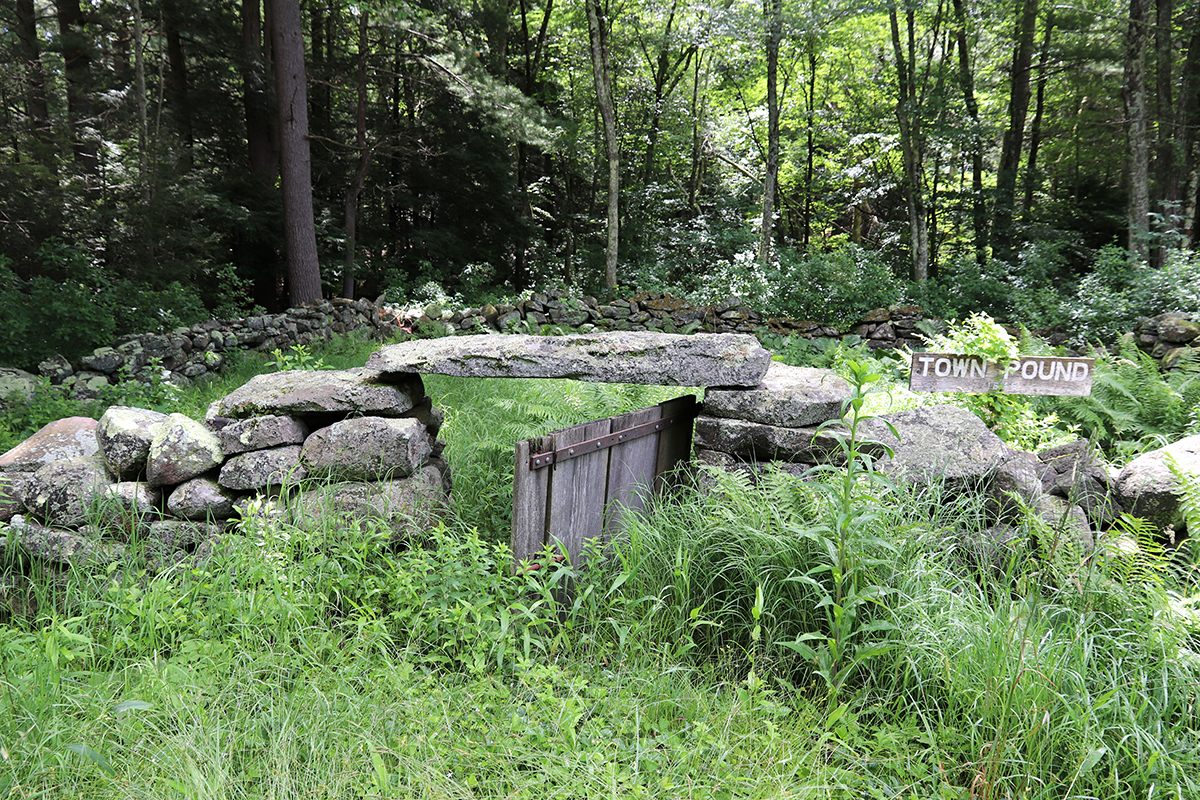 Pounds for wayward livestock—like this one in Foster, Rhode Island—were considered so essential that communities were legally required to build them. Johnna Kaplan

As cars zoom by on High Street in suburban Westwood, Massachusetts, Lura Provost, co-president of the Westwood Historical Society, stands beside the road next to a stone wall. Provost is 5’2”, and the heavy stones are nearly as tall as she is. Next to the wall is a plaque explaining the structure’s significance.

The passing motorists don’t slow down to glance at the plaque, or to wonder why someone would be standing there, in grass wet from a recent rainstorm. If they did, they might be surprised to learn about a nearly forgotten aspect of colonial American life.

Dozens of these stone enclosures—open at the top, usually square or circular, with a gap secured by a gate—remain scattered across New England. They were once a ubiquitous feature in the region. In fact, they were so necessary to the orderly functioning of a community that they were required by law. They were town pounds.

In 17th-century America, livestock were generally not fenced in as they are today. Back in England, grazing animals were guarded by herders. But in the New World, where labor was scarce, animals like sheep and cattle were turned loose to graze on common lands instead. (The town green, or common, was often used for this purpose.)

If an animal strayed and was found wreaking havoc on private property, it was brought to the pound, where it was corralled with other wayward creatures and watched over by a town-appointed “pound-keeper” (sometimes called a “pound-master,” or “pounder”) until its owner could retrieve it—for a fee.

(Prices varied by time and place. One community, according to Elizabeth Banks MacRury’s book Town Pounds of New England, set the bail of a horse, mule, ass, cow, or pig at 12 cents and 5 mills (a mill was a thousandth of a dollar). For a sheep, it was 1 cent and 4 mills; for a goose, 8 cents. Unclaimed animals could be sold at auction after three days (one day for geese). Stealing an animal from the pound incurred a fine of $7.)

Early colonists considered pounds so essential that communities were legally required to build them. The court of Massachusetts, for example, ordered towns in the colony to erect pounds as early as 1635. Details of their construction were discussed and voted on in town meetings.

Some local governments specified precise dimensions. One fairly typical Vermont pound was designed to be 30 feet square,* with six-foot-tall walls that were four feet thick at the bottom and two feet thick at the top. Other town councils simply requested that builders make pounds “horse high, bull strong, and hog tight,” as the age-old farming maxim dictates.

Susan Allport, author of Sermons in Stone: The Stone Walls of New England & New York, writes that pounds were one of several types of fence that represented “the conflicting needs of crops and animals” in New England.

These concerns may seem arcane today, but remnants of town pounds still endure in the region’s character—and its laws. The position of “fence-viewer,” for instance, once tasked with “perambulating the bounds” of New England towns, can still be found in the General Statutes of Connecticut: “Selectmen shall receive two dollars for each day’s service as fence viewers.”

Town pounds became largely obsolete in the late 19th century, as common lands were divided and farmers penned their animals on private property. Today, most have disappeared (though the concept lives on in animal-control departments and vehicle-impound lots.) Yet while other mundane relics of early American life—covered bridges, little white churches, the aforementioned town greens and stone walls—have become iconic symbols of the region, town pounds are a niche historical curiosity, occasionally rendered slightly less mysterious by an informational sign or, as in Westwood, a plaque.

Over the roar of traffic, Provost describes the history of the Westwood pound, which was built in 1700. Despite its prominent location and the fact that it’s proudly depicted on the town seal—a stone square with an oak tree growing within its walls—“no one asks about it,” she says. Local history doesn’t resonate much in this bedroom community, which increasingly attracts newcomers from elsewhere.

The story is a little different in Sterling, Connecticut. Megan McGory Gleason, president of the Sterling Historical Society, says she sometimes receives requests for information about Ye Olde Voluntown Pound, which dates back to at least 1722. Located at the junction of two roads, it was rediscovered in 1931 by highway workers clearing brush, and later made into a picnic area.

Interest in the site has increased a bit since it was posted on a Facebook page for regional history buffs in 2018. It helps that the neatly circular Voluntown Pound—Sterling was carved out of Voluntown in 1794—is relatively well-restored.

“The establishing of a new Pound in a large area is the first inkling … that the smaller section was considering their independence from the larger community,” writes MacRury, “even before a request to become a separate parish, or to have their own Church.”

Gleason says that after Voluntown was incorporated, in 1721, townspeople built multiple pounds—even as their plans for building a meetinghouse were “mired in bureaucratic nonsense” for nearly a decade.

This might sound familiar to anyone who has attended a New England town meeting in modern times. Indeed, MacRury and other experts see direct links between the ways of contemporary New England and the customs of its past. Pounds, she writes, can be seen as the foundations upon which our modern roads, governments, and laws were built, reminding us “of the paths, ways, and directions which have been made for us—which we follow knowingly or unknowingly.”

Given that many of the roads New Englanders drive today originated as cow paths, it’s worth considering how many of the region’s less tangible traits can be traced to those seemingly remote colonists. In 1974, The New York Times called New England town pounds “[America’s] Coliseum and Acropolis”—“important monuments to a departed way of life.” But perhaps, like the provision for payment of fence-viewers in modern Connecticut laws, that way of life is not so much gone as adapted to the times.

Some towns symbolically preserve the memory of these forgotten practices. Westwood, for example, still appoints a pound-keeper. So does Hampton Falls, New Hampshire. In 2007, the town named former Governor John Sununu and his wife, Nancy, pound-keepers. (They were also named “hog reeves”—a position once responsible for controlling and appraising damage caused by rogue swine.)

It’s all done in fun, of course. Even in the past, the post of pound-keeper was treated as a bit of a joke. The job was taken seriously enough that appointees swore a “Pounder’s Oath,” but it was unpleasant (pounders had to be on call to wrangle wayward animals when needed) and it didn’t pay well (a pound-keeper had to feed animals at his own expense, hoping for remuneration when the livestock were retrieved).

Decidedly uncoveted gigs like pound-keeper or hog reeve were sometimes jovially forced upon the “prissiest” man in town, assigned randomly—to, say, the most recently married man in the community—or considered a dues-paying step on the path to a political career. “One only wishes for as good a way of testing those who would run for office today,” writes Allport.

Today perhaps a hundred town pounds remain across New England. (They exist in other areas too. In addition to having mapped two dozen of New England’s pounds, users of the site waymarking.com have located one in a Nevada ghost town, and several in the U.K.) There are probably more.

Many could simply be hidden, as MacRury writes, “buried beneath trees and vines,” their carefully placed stones “tumbled and scattered.” And some may have already been located, but misidentified. Allport writes of a ranger leading a hiking group in Ridgefield, Connecticut, who told his charges that a stone circle in the woods was likely a pound—but the group decided, instead, that it was “a celestial observatory built by Druids.”

Others are easy to mistake for rock piles or abandoned segments of the stone walls that mark property lines and bisect dense Northeastern woods. When homeowners in Sterling, Connecticut, recently found a stone structure in an overgrown part of their yard, they thought it might be a cemetery.

Later, however, they “unearthed an 18th-century hand-forged iron animal harness buckle from inside the enclosure,” says Gleason, and asked the Sterling Historical Society to look into it. “As soon as I saw it I noticed the similarities to [the pound in] Preston City, so we started digging into the history,” Gleason says. She now believes that it may be the same pound mentioned in town-meeting minutes from 1735.

For those with sharp eyes and curious minds, take note: There are probably many more town pounds still out there—an unknowable number, in fact, simply waiting to be found.

* Correction: This article previously stated that a typical town pound in Vermont was 30 square feet. The enclosure being described was 30 feet per side, so its dimensions were 30 feet square.

Ken Burns on His Obsession With Ben Franklin, and Admiration for Guy Fieri

The documentary filmmaker talks about a founder's flaws, radical openness, and road tripping for a sandwich.
music

English colonists needed alcohol to survive. And for that, they needed women.
Video • AO Docs