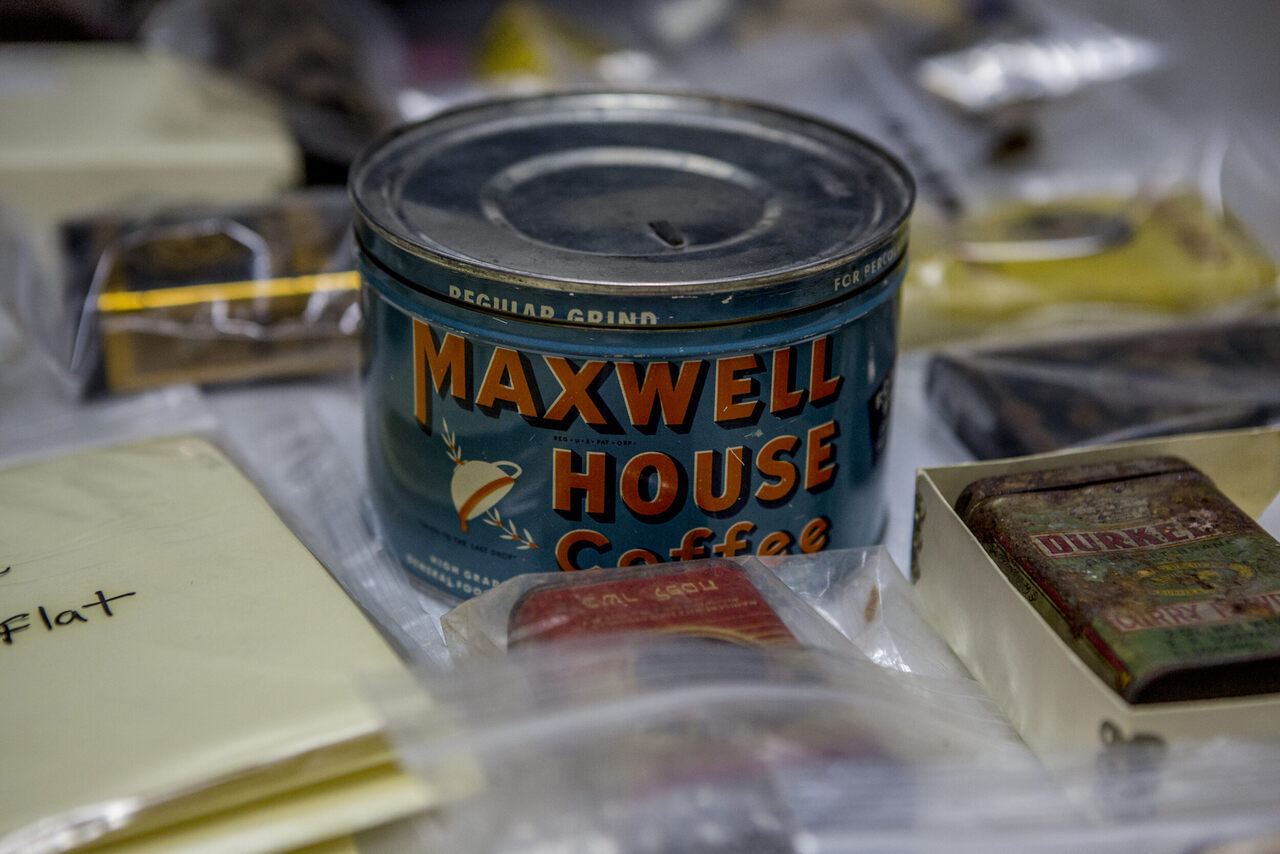 Mass-produced foodstuffs, such as ground coffee and curry powder, came in tins. All Photos: Zach Gross

Like everything else in this basement storage space on New York’s Lower East Side, the perfumes were once trash—forgotten, left behind, or tossed away. The museum is known for having preserved or restored a handful of cramped living spaces and businesses in two tenement buildings—the kind that typified the neighborhood throughout the 19th and 20th centuries, when it was a dense immigrant enclave. Today, its tours give visitors some sense of what life was like for Kosher butchers, Puerto Rican garment workers, and more. As the museum combed through these cramped, dilapidated apartments and storefronts, they exhumed plenty of debris that generations of residents had left behind.

The museum’s archive of antique garbage and cast-offs is off-limits to visitors. The trove, some 6,000 items, is south of the visitors’ center, down two flights of stairs, past a darkened room full of whirring servers, and beyond cabinets stacked with printer cartridges. A few pieces are on display in the museum’s restored apartments, but the vast majority of it lives down here—cleaned, catalogued, preserved, then tucked away.

Typically, once artifacts go from a dig site (or historic renovation) to a museum, their management becomes about stalling time and halting entropy with the right kind of storage materials, climate control, and careful handling.

The Tenement Museum’s trash collection has it a little different. “It’s not actually the most ideal storage space,” Swanson says. In a dream world, she adds, the museum would be able to stow this material in better conditions and make it more available to the public, but that’s not how things stand right now. Though there’s a precision to everything—each drawer and bag is labeled and numbered, and everything is cradled by archival-quality foam or kept in acid-free boxes—the basement isn’t designed for precious things. A rat poison sign is fastened to the wall and little glue boards are laid out to intercept insects. A dehumidifier squats in a corner. The ceiling hangs low enough that it is striped with yellow-and-black caution tape. Water rushes through overhead pipes with a slurp, loud enough to interrupt a conversation.

Most of the trash in the archive turned up when the museum worked to stabilize the floors, ceilings, or staircases of 97 Orchard Street, one of the two tenements it owns. The five-story, multi-family building went up in 1863. Between then and the end of the 1930s, tens of millions of immigrants landed in New York City, and the museum estimates that roughly 7,000 of them passed through 97 Orchard. The tenants came from all over Europe: first from Germany, Russia, and Eastern Europe, and later Turkey, Greece, Spain, and Italy. People lived in the building until 1935, when the owner decided to board the apartments up rather than continue to update and maintain them. Shopkeepers operated out of its street-level storefronts for decades after the apartments went vacant—for more than 50 years—even as the neighborhood filled with new arrivals from China and Puerto Rico. The museum’s cofounders began leasing the building in 1988, and had purchased it by the time the first exhibition opened to the public in the mid-1990s.

Preservation, stabilization, and restoration were conducted piecemeal. “We talk about it as bringing a floor online at a time,” says Dave Favaloro, the museum’s director of curatorial affairs. Updating the wiring, stripping beadboard to reveal fireplaces, pulling up floorboards—all jarred loose small items lost or stashed by their owners, or secreted by rodents, over the years. “From what I understand, rats like shiny things,” Favaloro adds. “How else would they have become clumped together?”

Trash is perhaps the greatest currency of archaeology. It tells stories, but they don’t always have a beginning, middle, and end. Favaloro says there’s not much to be gained by thinking about this material as something that can be excavated layer by layer. Many of the pieces—newspaper clippings, wedding invitations, ledgers—are, at best, snapshots. “Imagine somebody came to your home 150 years from now and opened up your kitchen floor,” he says. “Your junk mail happened to slip through the cracks, and somebody tried to glean the nuances of your own daily life from that.”

But there is still much to be learned—especially about immigrants’ daily routines, challenges, and aspirations. Favaloro was surprised to discover in the collection a tin of Durkee curry powder. “I didn’t expect to find [one] in a home that, at the time, was home to mostly Eastern European Jewish immigrants,” he says. The debris also includes dried-up raspberries and a waxy, half-eaten bagel that found its way behind a fireplace. There’s a common misconception, Favaloro says, that European immigrants couldn’t afford fresh produce or meat, and instead subsisted on meager meals of bread and soup. Historian Hasia Diner contests that idea in her book Hungering for America, in which she describes a Lower East Side teeming with food merchants. Fruit pits discovered in the footprints of old kitchens also dispute that idea, and each gets its own bag in the basement. (Their neighbors include a naturally mummified mouse and a little skeleton that Swanson and company haven’t yet been able to identify.)

The museum hasn’t quite decided what to do with this unusual archive. Some kind of visible storage or a digital gallery might be an option, Favaloro says. Then again, “This isn’t the type of museum where an object stands alone and has meaning in and of itself,” he says. “These objects acquire meaning in the context of the stories that we weave around them.”

The neighborhood around the museum is certainly no time capsule. Sam’s Knitwear, with its rusted iron grate and sun-bleached sign, remains, but across the street is a two-story artisanal coffee shop and a storefront advertising a luxury condo development rising nearby. Though the museum limits additional acquisitions—they simply don’t have the space—the staff does occasionally salvage things from local stalwarts on their way out. Tucked in among the centuries-old trash are boxes, for example, from M. Schames & Son, a hardware store that had been operating out of 3 Essex Street since 1927. The business relocated, so the museum took in some material that would have otherwise landed in a dumpster.

Even without too many new things piling up, there are still boxes upon boxes of older detritus and donations that have yet to be processed. Before the building’s yard was added to tours a few years ago, Favaloro says, the collections team could sift through stuff back there. Now they’re looking for a new space to accommodate the dirty work. “You can’t really do that on a street corner,” he says.

There is a little conservation workstation in a corner of the storage room, but it doesn’t get much use—it can be sweltering down there. Still, it’s set up with with gloves, Q-tips, and alcohol. Along with colleagues in the education department, Swanson will continue to dip into the archive, swabbing and searching for stories. This conservation work calls for a light touch, she says—just a little cleaning that preserves the patina, the age, the story. “I think it adds some of that historic value,” Swanson says. “It came out of the floor.”

For more than 30 years, Mark Cline has been keeping the state weird.
trashgarbagearchiveimmigrationhousesfeaturesmuseums
Keep Exploring
museums

"This is as important to me as any President’s house.”
national parks

Bottles, cans, and more can reveal a long history of industry, recreation, and shenanigans.
sewers

Fed Up With Fatbergs, an Australian Water Company Recorded a Jazzy Jingle About the Sewer

Welcome to the "throw zone."
Read more
Thanks for sharing!