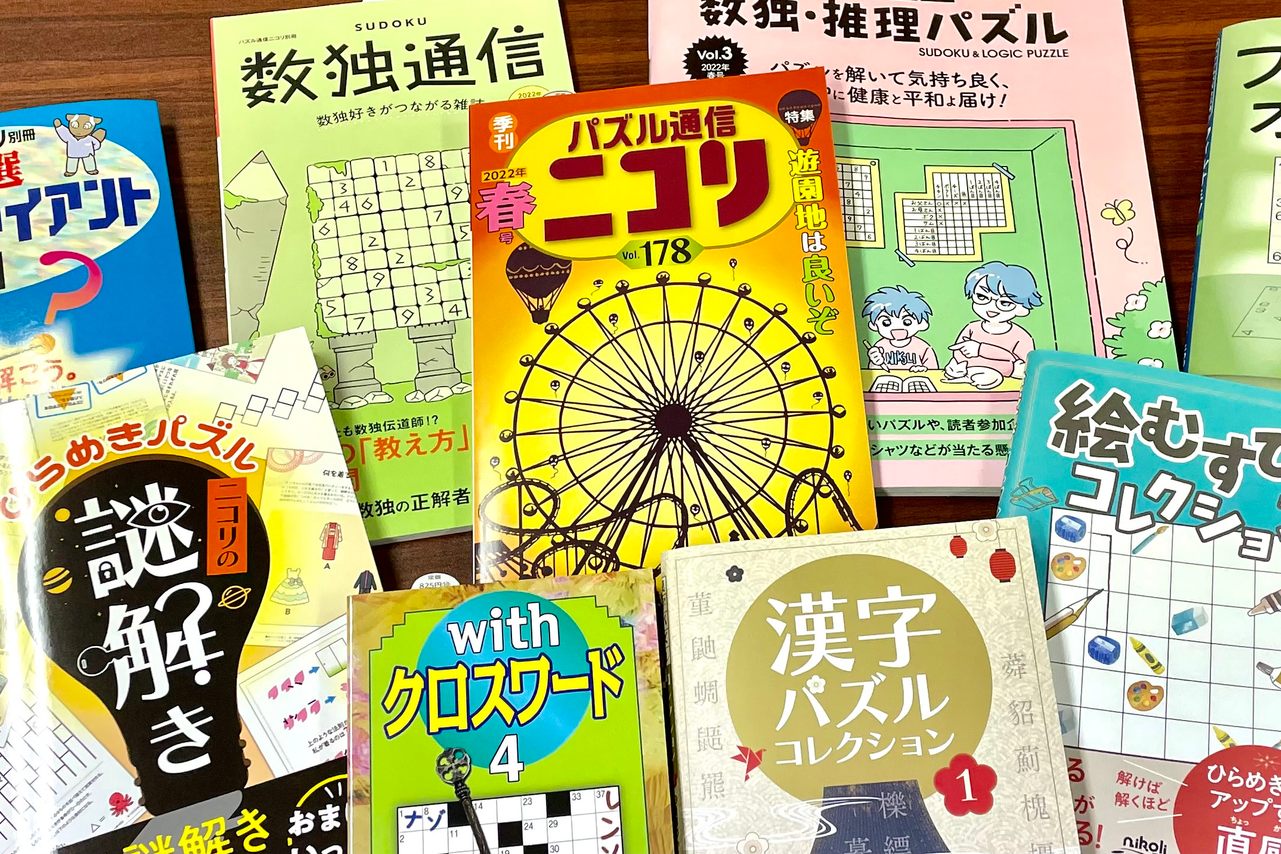 Puzzle Communication Nikoli has a small circulation but a global influence. Yoshinao Anpuku

Among our crosswords and other puzzles, we’ll be featuring logic challenges from Puzzle Communication Nikoli, a cult-favorite puzzle publication from Japan. After checking out this introduction to Nikoli, try our first Nikoli challenge, Tentai Show!

In 1989, when Yoshinao Anpuku was a 21-year-old math student at the University of Kyoto, he came up with a puzzle, and sent it in to his favorite magazine, Puzzle Communication Nikoli. The logic-based challenge was in the style of others featured in the magazine: a square grid that the solver was required to fill in some way, step by step, following very simple rules to reach a unique solution.

Nikoli published Anpuku’s submission and called it Shikaku, short for “cut it in rectangles,” since the puzzle required solvers to divide the grid into rectangles of given sizes based on numbers scattered around it. It became one of the magazine’s most popular puzzles, and now, decades later, it is published in newspapers all over the word, including The Wall Street Journal and Times of London, where it is known as Cell Blocks.

Many other well-known puzzle types emerged from the pages of Nikoli; it is perhaps best known for popularizing the most famous grid logic puzzle of all, Sudoku. Indeed, Nikoli is widely recognized as the most influential puzzle publication in history, having established the template for all grid-based, paper-and-pencil logic puzzles, and paving the way for their ubiquity today. Yet what is remarkable about Nikoli is not just its peerless catalog of hits—to many, Nikoli is synonymous with satisfying logic puzzles—but also its model. The magazine is created almost entirely by its readers.

“We are a community,” says Anpuku, who joined Nikoli a year after he invented Shikaku, was its editor for two decades, and is now president of the company. “We just wish to share the joy and excitement of puzzles with our creators and readers.”

Nikoli is a quarterly magazine that sells around 30,000 copies, and is only available in Japanese. Every year it receives about 4,000 puzzles from a core of around 300 readers, who range from teenagers to people in their 70s. Nikoli’s editors—it has a staff of 24—check every puzzle and select the ones they like for publication.

Sometimes the puzzles sent in are examples of classic Nikoli puzzles, such as Sudoku or Shikaku. But often readers invent new types. Over the last 40 years, Nikoli has created and published around 500 new types of grid logic puzzle, a few dozen of which have become standards. Their most famous include Slitherlink, Nurikabe, Masyu, Fillomino, and Tentai Show (featured this week on Atlas Obscura).

Another aspect of Nikoli’s culture that sets it apart is that all its puzzles are designed by hand, rather than—as is the case for almost every other puzzle magazine in the world—generated by computer. Nikoli’s considers its creators artisans who use their puzzle-making skills to craft exciting journeys for solvers. Almost all the puzzles submitted arrive at Nikoli’s Tokyo office printed on pieces of paper, rather than in digital form.

“What makes Nikoli puzzles unique is the fact that our editors collaborate with numerous individual creators and fans,” says Anpuku. “Having a fan-based creation process gives Nikoli puzzles a totally different ‘flavor’ and excitement from the computer-formulated ones.

Nikoli’s most famous puzzle is Sudoku, which, ironically, is one of the few of its signature puzzles that it didn’t invent. Yet Nikoli played a pivotal role in the refinement and dissemination of Sudoku, and all the other Japanese-style logic puzzles that followed in its wake.

In 1980, Maki Kaji, a charismatic, fun-loving university dropout, launched Japan’s first puzzle magazine. He was a gambler, obsessed with horse racing, so he named his magazine after a horse that was taking part in that year’s Epsom Derby, one of England’s most famous races—Nikoli.

Kaji was an admirer of American puzzle magazines. One afternoon, while flicking through Dell Pencil Puzzles and Word Games at the track, he spotted a puzzle called Number Place. He thought it would work well in Nikoli, so he renamed it Sudoku, an abbreviation of the punning phrase “numbers should be single, unmarried”—many Nikoli puzzles have these kinds of in-joke names—and polished the design. He presented the given numbers in a symmetrical fashion, like patterns in a crossword grid, to make the puzzle look more attractive. The first Sudoku appeared in Nikoli in 1984.

Two decades later, of course, Sudoku became an international craze. Within a few months of the first example appearing in the Times of London, it became ubiquitous in newspapers across the world, a prominence the puzzle still holds today. It is arguably Japan’s most successful cultural export of recent years.

Yet back in 1984, the arrival of Sudoku did not register beyond Japan’s dedicated puzzle community. Indeed, it didn’t even really excite Nikoli readers. It was not as popular as another puzzle that Kaji had taken from an American magazine: Cross Sums, which he had renamed Kakuro.

What Sudoku and Kakuro did, however, was instill in readers a taste for this style of logic puzzle set in grids. When Kaji introduced a section in Nikoli for readers to submit their own puzzles, the offerings were inspired by the grid-based, step-by-step, formula of both the American-origin puzzles.

One of the earliest submissions came from a teenage student using the pen name Lenin. He suggested a grid in which the corner of all the cells were dots, and the idea was to link the dots to create a continuous loop. A Nikoli staff member combined this idea with a suggestion from another reader, Yuki Todoroki, to create the puzzle known as Slitherlink. (In Slitherlink, some cells contain numbers that denote the number of line segments around the the cell. All the segments must connect to create a single, unbroken, slithering line all over the grid.)

Slitherlink was Nikoli’s first original puzzle, and it quickly was promoted from the readers’ section to the magazine proper. Not long after that, Anpuku submitted Shikaku, which also became a signature puzzle. In fact, the readers’ section soon became the most popular part of the magazine. Nikoli’s mailbox was swelling with dozens, then hundreds of new puzzle concepts, as well as thousands of examples of established puzzles—each one crafted to provide a satisfying solving experience. Readers also gave feedback on submissions, suggesting tweaks, refinements, and improvements.

By the early 1990s Nikoli had evolved into a completely different publication than it had been at launch. The fans had taken over and turned it into a laboratory of puzzle invention unlike anything else in the world. Nikoli had essentially discovered “crowdsourcing,” more than a decade before that term was invented, and another decade before Atlas Obscura created its community-driven database of wondrous places around the world.

All this happened under the astute guidance of Kaji, who believed that puzzles were a form of mass entertainment and should therefore not exclude people by being too frustrating or requiring some special way of thinking. Gradually, Nikoli puzzles developed a “feel.”

Each puzzle is based on a grid that solvers must fill in. The rules must be intuitive and simple, explainable in a few lines, so that they can be solved step-by-step, using logical deduction alone, to reach a unique solution. And the puzzles need to be presented with clearly marked levels, including an easy level for beginners. Though all Nikoli’s puzzles conform to this formula, the constraints allow for a huge variety of puzzle types, each requiring different techniques to solve. Every puzzle type is a universe to explore, and every solution a story to be told.

Kaji also believed that puzzles made by hand were superior to those generated by computer. He said that puzzles should have a human element, like a sense of humor, or an element of surprise, such as, say, a trap set by the creator. Anpuku says this emphasis was natural, since these qualities are traditional and respected in Japanese culture.

In the 1990s, Nikoli branched out into puzzle books consisting of examples of a single puzzle type. In the late 1990s, Wayne Gould, a New Zealander on vacation in Japan, picked up a Sudoku book in a Tokyo bookshop. He developed a computer program for constructing them, and in 2004 showed the puzzle to the Times of London. The rest is logic history.

The international success of Sudoku turned Kaji into a celebrity. He printed business cards that said “Godfather of Sudoku,” and traveled the world. Such was the demand for Sudoku that Nikoli began supplying the puzzle to around 700 newspapers in more than 80 countries. Nikoli was, for the first time in its history, earning serious money.

Yet the boom was short-lived. Other puzzle companies that generated unlimited numbers of Sudoku by computer were able to undercut Nikoli, which charged more for its handcrafted products.

Still, the global interest in Sudoku created a scramble for the next big logic puzzle, and Nikoli had plenty of inventory. Puzzles such as Kakuro and Shikaku began to appear in newspapers around the world. Indeed, the popularity of Sudoku caused many newspapers to expand their puzzle coverage, including by introducing Japanese-style grid logic puzzles. Not all of these puzzles were invented by Nikoli but they all owe a debt to the company that laid the groundwork of the genre.

Kaji died in 2021 at the age of 69. Nikoli remains in good health. New puzzles arrive in the office every day, and his successor Anpuku is hopeful that Nikoli will able to attract new fans outside of Japan: “We would like to create a global community with puzzle creators in the world.”

Puzzle Monday: The Art of Illumination

13:46
Want to see fewer ads? Become a Member.
From Around the Web
Atlas Obscura Trips
Artisans & Exiles: Exploring the Hidden Traditions of Japan’s Sado Island
View This Trip
Thanks for sharing!