To Save Birds From Invading Americans, One Man in Poland Built Floating Forts - Atlas Obscura
Want to see fewer ads? Become a Member. 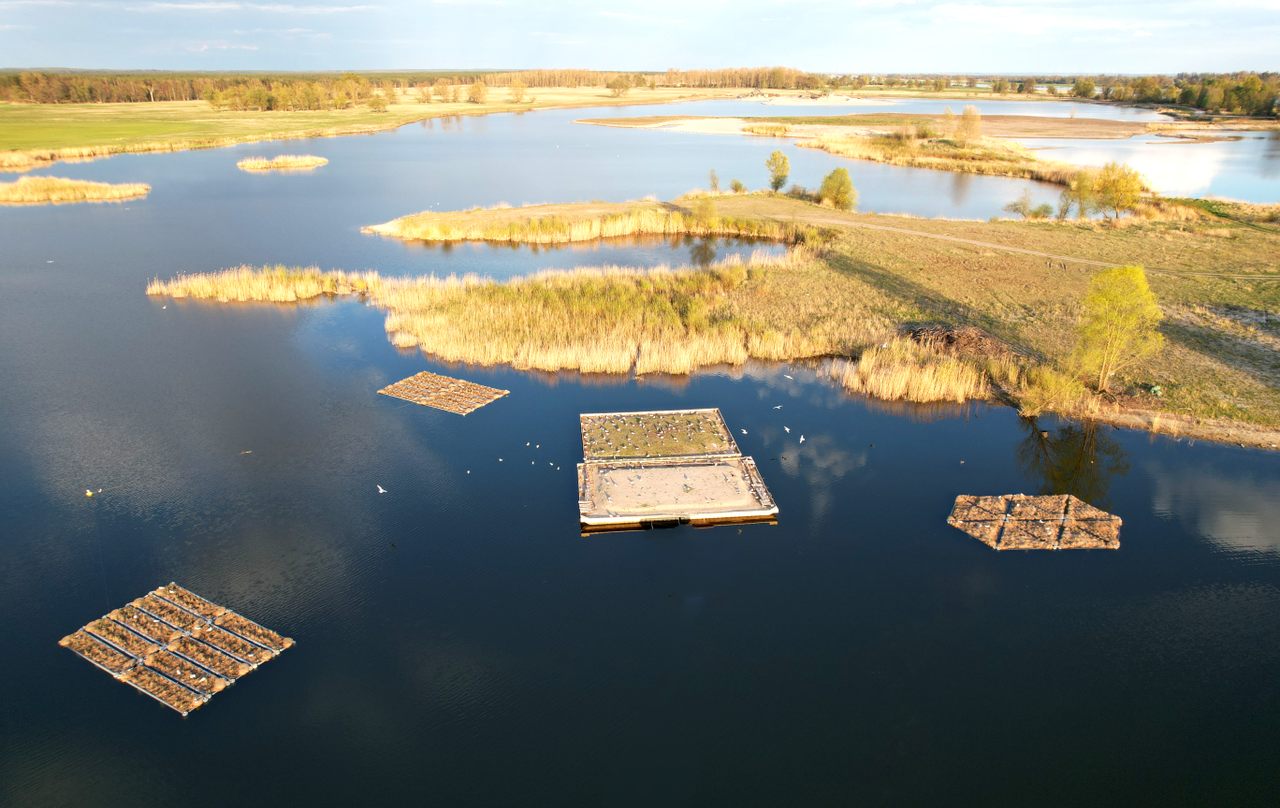 In the warm sun of a late spring day, a small island bustles with birdlife. There on the Oder, the second largest river in Poland—which also defines part of its border with Germany—the sandy island teems with a variety of gulls, terns, and plovers. The birds feed small fish and insects to their eager chicks, argue with neighbors, mate, and clean their nests, rarely pausing for rest during this busy season of rebirth and renewal. Their behavior is natural, but their home is not. The island’s sharp angles reveal it is the work of humans.

“There is no alternative,” says environmentalist and wildlife photographer Piotr Chara, who built eight of these artificial islands. “On natural or half-natural islands, most chicks would have been eaten.”

The predators are raccoons and American minks. Native to North America, the mammals have recently become invasive in many parts of Europe, including northwestern Poland. In the Lower Oder valley, the invasion has been particularly brutal: Habitat degradation made the river an all-you-can-eat buffet for the predators. That is, until Chara began building fortress-like refuges for birds at risk.

In the 18th and 19th centuries, when the Lower Oder region was part of Germany, levees were built along most of the river to reduce seasonal flooding and regulate its course, allowing ships to transport coal, wood, and other cargo. The construction destroyed sandy islands where thousands of waterbirds nested, forcing many of the animals to relocate. When Chara visited the area for the first time in 2001, however, he says he was amazed at the richness of the birdlife that had persisted, thanks to about a third of the Lower Oder—about 42 kilometers, or 26 miles—remaining levee-free on the east side, now part of Poland.

Historically, this stretch of the river was largely undeveloped, aside from a few exploratory pits dug by people interested in quarrying gravel. The water table was too high, however, and the pits flooded, sometimes so quickly that piles of excavated sand and gravel were left behind. The summits of these abandoned mini-mountains, exposed above the water, looked like islands to terns and other species, which established breeding colonies on them—to their peril. As the birds repopulated the valley, a new threat crept into their midst.

Raccoons (Procyon lotor) and American minks (Neovison vison) were introduced into Europe in the early 20th century for fur. A few escaped from farms, but others were released into the wild intentionally, mostly in Germany and Russia, “to ‘enrich’ the animal world for hunters,” says Magdalena Bartoszewicz, an independent researcher who has studied raccoons and other invasive species in Poland for decades.

“In Poland, the first American minks were spotted in the 1950s,” says Marcin Brzeziński, a University of Warsaw zoologist and coauthor of a book about the animals. In the decades that followed, the invasive minks established populations in northern Poland. By the 1990s, says Brzeziński, the animals started moving south. Wherever they showed up, they changed ecosystems and extirpated entire species.

“Until the 1990s, almost every lake in northern Poland was inhabited by hundreds of Eurasian coots,” says Brzeziński. The striking birds, almost entirely black with white beaks and white patches on their heads, usually nest in reeds along shorelines or in shallow bays, where they were easy targets. “After the mink’s invasion,” Brzeziński says, “coots disappeared from many lakes.”

Dariusz Bukaciński, an ornithologist from Wyszyński University in Warsaw, has been studying common gulls for 25 years. “In the mid-1990s, we had 4,300 pairs of these birds in Poland,” he says. By 2009, there were only 2,300 pairs left, thanks largely to predation by minks.

The raccoon invasion, via Germany, began in the mid-1990s with just a few individuals. Now, while the animals are still rare in much of the country, “In western Poland, the raccoon is one of the most numerous carnivorous mammals, ” says Bartoszewicz.

Chara witnessed the devastating impact of both invasive species on Lower Oder valley birdlife. It began with the arrival of the American minks, which are significantly larger and more aggressive than critically endangered European minks. “Whenever there is a live bird, a mink will kill it. It’s instinct,” says Chara, who says he recalls seeing a single American mink kill hundreds of gulls over a period of just a few days in 2002. “Our birds are not adapted to deal with such a predator.”

A few years later, the raccoons moved in. “Although it does not have such a killing instinct like a mink, it is a smart, agile animal,” says Chara. “I saw how one raccoon killed all 180 chicks and eggs in one colony.”

Chara watched in despair as the birds, nesting on the semi-artificial islands of exposed debris in old gravel pits, lost their clutches year after year. “For 10 years, some gulls and terns were not able to raise a single chick,” he says, still emotional as he remembers the losses.

The birds had no defenses against the predators—until Chara realized he could provide them with some. Using small, flat-bottomed military surplus boats heaped with sand, he created the first artificial nesting island in 2015. The smooth metal sides of the watercraft prevent minks and raccoons from climbing onto them.

That May, the first pair of birds to make a nest on the fortified island took Chara’s breath away: “It was the Eurasian oystercatcher.” At the time, there were only a dozen pairs of the birds in all of Poland. Within a few weeks, terns also began to nest on the island, followed by noisy, highly sociable gulls. By the end of the year, Chara had constructed two more island forts. In 2017, he built another five, this time employing a welder to connect thick metal sheets, slanted at the base to repel minks and raccoons even more efficiently. Now, common and little terns, oystercatchers, common ringed plovers and black-headed gulls nest annually on all eight islands. “If we did not build them, these birds would have no chance to survive,” says Chara.

“Humans introduced invasive species, so humans have to help the endangered birds,” says Brzeziński, echoing comments from others observing the bird forts’ success.

Now, every fall, Chara cleans and repairs the islands, preparing them for spring nesting. The bird forts, he says, are protecting something humans could never create: nature itself. “It is so beautiful,” Chara says. “I want to leave as much of the beauty as possible.”