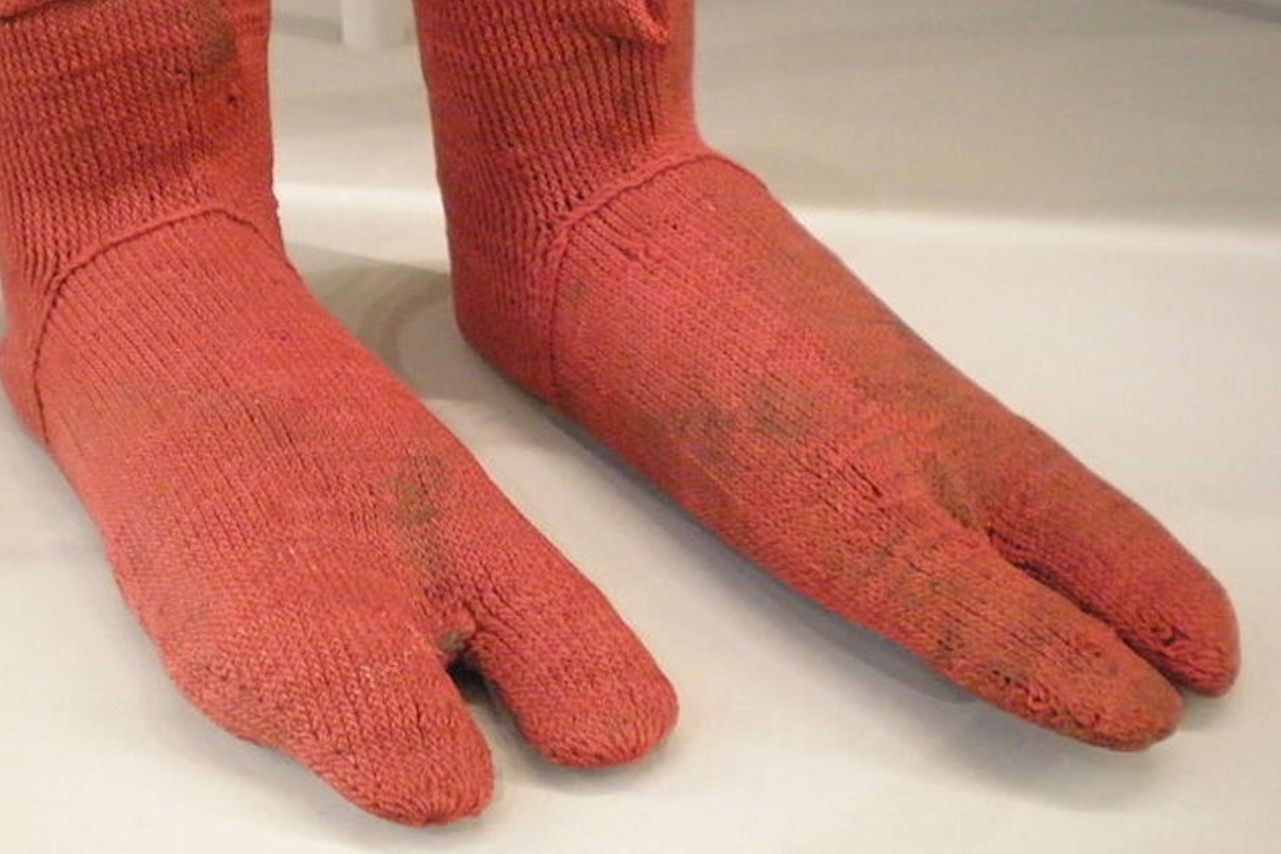 These socks, made in Egypt in the fourth or fifth century and now in the Victoria and Albert Museum, are all the better for your sandals, my dear. David Jackson/CC-BY-SA 2.0

Socks and sandals. The combo might elicit cruel jabs from footwear snobs today, but people have been rocking it since ancient times. In the eighth century B.C., for instance, the Greek poet Hesiod instructed contemporaries to wear piloi, something soft and matted, under their sandals. Sometime around the year 300, a kid was running around near the ancient city of Antinoupolis, in Egypt, with his or her foot stuffed into a striped sock split into two, kind of like mittens for the feet—the big toe in one part, and the four other little piggies in the other. That socked foot was likely strapped into a sandal.

Some of these ancient Egyptian socks have withstood wear, tear, and centuries, and wound up in museum collections, where scientific analysis can unravel some clues about when and how they were made. That striped wool sock from Antinoupolis was unearthed more than a century ago, from a rubbish heap near modern-day Sheikh Ibada, and is now in the British Museum. Radiocarbon dating placed its creation somewhere in the third or fourth century, during the period of Roman rule in Egypt. These were made with a technique called naalbinding (or nålebinding), which is sometimes considered a precursor to two-needle knitting and involves looping yarn on a single needle. The sock’s two toes were made separately and then joined together, and when a research team led by Joanne Dyer, a scientist at the museum, used multispectral imaging to take a closer look at the striped pattern in October 2018, they found that the alternating bands of colors were probably made by bathing the wool in natural dyes, including madder root, which tints textiles various ruddy shades.

Analysis has its uses, but it’s different than taking a stab at making something yourself. That’s what heritage educator and crafter Sally Pointer is doing, creating replicas of these and other ancient garments.

Pointer has been enamored with the ancient world since she was a kid, when she cooked up plans for potions, devices, and craft projects—all with the goal of understanding how things came to be. (“I had very tolerant parents,” she says.) In college, she studied archaeology and Middle English, and then funneled her wide-ranging fascinations into a focus on historical technology. After a few years in museum education, she went freelance. Now based in South Wales and Herefordshire, Pointer juggles a slew of commissions, from fashioning Victorian-era stockings for displays, films, and reenactors, to making one-off objects for museums and teaching lessons in heritage crafts.

While assembling hairnets in Bronze Age–style or Neolithic–era tunics, Pointer and her husband, Gareth Riseborough, have also developed a reputation for foraging in their quest to recreate little slices of the past. “I’ve got a bit of a local reputation as a hedge-botherer,’” she says. The pair once strode past country pubs carrying armfuls of lime branches, which they submerged in local waters for a few weeks until they split into thin, raffia-like strips perfect for fashioning into cords or string. (The texture was great—“quite soft and silky even,” Pointer says—once they’d vanquished a revolting, sewage-y smell.)

As ancient technology goes, textiles can be particularly intimate. Clothing often signals something the wearer wants to communicate, or reflects what a culture values. To Pointer, that makes clothing “an excellent way to start a discussion about what we think we may or may not have in common with those ancestors, even through the vast gaps in our knowledge about many of these time periods.” A certain degree of conjecture is inevitable, she adds, and later research can sometimes reveal that a prior reconstruction is all wrong. But the process itself is evocative of how ancient people spent their time, or even divided their year between, say, planting and harvesting, and, during the colder months, making indoor crafts.

Pointer found these socks appealing because they were “cheerfully striped,” and because reference images of them are easily accessible. Those allowed Pointer to scale the stripes and proportions, even if she wasn’t aiming for what she calls “a stitch-by-stitch accurate replica.”

To make these socks, she looped wool yarn around a single needle, and emulated the strategy of making one toe at a time. (This wasn’t Pointer’s first naalbinding rodeo, though, as she’s also used the technique to make ones in the style of the Viking Age.) The process of making one cup for the lone big toe, a larger one for the others, then joining them together “is the most practical way to make them,” she says. “Most early items like this show a very logical approach to construction when you look closely.”

The completed socks will hang out in the box of samples Pointer carts along to lessons, and will come in handy in a few months, when her beginning naalbinding students will have the opportunity to take a close look at her very, very old-school handiwork.

Pointer knows her knitting projects don’t function as perfect portals to the past. “No matter how accurate our reconstructions, there will always be many aspects of the original maker’s thought processes, background skills, rationale in choosing materials or technique, or just mood on a given day that we can’t hope to understand,” she says. “But making things using methods that are largely forgotten today can give us incredible insights into the relative skills, amount of time taken, and perceived ‘value’ of an item that is hard to grasp when you just look at it.” Or when you pull a sock from your drawer today.

Walking the Walk With a Professional Shoe Conservator

The past, present, and future of footwear, from an expert charged with keeping soles intact.
objects of intrigue

In Guna Yala, indigenous women sew stories of legend, revolution, and even Minnie Mouse into the elaborate textiles known as molas.
royalty

How empresses used "metamorphosis" to show their male courtiers who’s the boss.
design