How Do You Care for One of the World's Oldest Aquarium Fish? - Atlas Obscura
Want to see fewer ads? Become a Member. 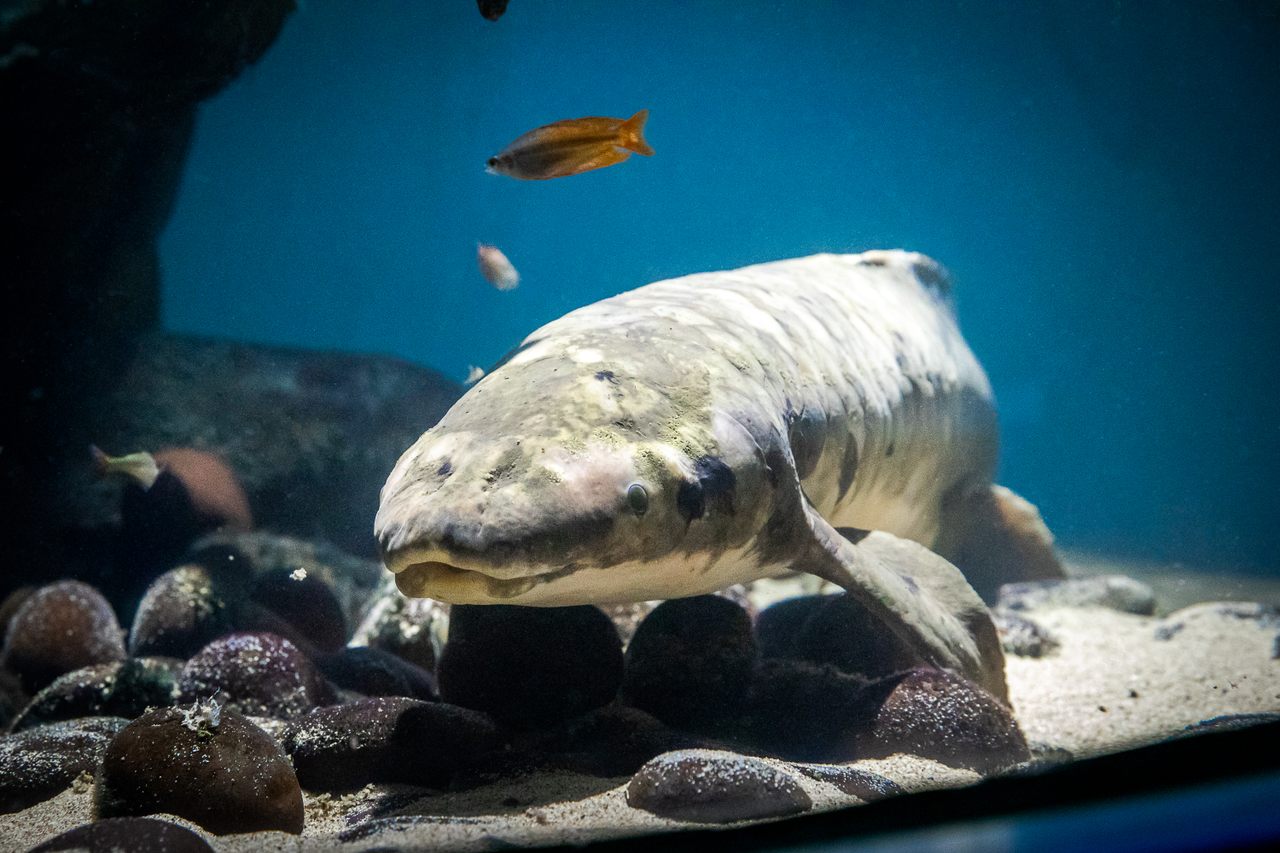 Methuselah, an Australian lungfish, is at least 86 years old, and according to her keeper, biologist Allan Jan, she shows no signs of slowing down. Gayle Laird © California Academy of Sciences
In This Story
Destination Guide

Methuselah isn’t like most fish. She seems to like belly rubs and chin scratches and dines on restaurant-grade prawns and ripe, seasonal figs. She also has both lungs and gills, and she’s about 90 years old.

Methuselah—named for the Biblical patriarch said to have lived 969 years—is a lungfish, a species thought to be the evolutionary link between fish and amphibians. She arrived at the California Academy of Sciences in 1938; no one knows exactly how old she was then. In the 84 years since she has grown to a length of four feet and weighs a massive 25 pounds.

She has outlived Granddad, a 95-year-old lungfish that resided at Shedd Aquarium in Chicago until 2017, and is now the oldest aquarium fish in the United States and perhaps even the world. Atlas Obscura talked to Methuselah’s longtime caretaker, biologist Allan Jan, about how to care for a sweet old fish with gourmet tastes.

When did you first meet Methuselah?

I first met Methuselah I want to say fifteen years ago as a volunteer. There were two other [lungfish] at that point. I was a newbie, so I didn’t really know what their natural behavior was. But then once you get to know them and feed them, you see each individual has their own personality, their own behavior.

As I got to know Methuselah more—working with her, feeding her, taking care of her—her personality really struck me as different. She’s just not as rambunctious as the other ones. And I asked about that and then they’re like, “oh, she’s really old. She’s been here since the thirties.”

What does a typical day look like for you?

Every morning, I’ll check up on all the [freshwater fish] habitats. Make sure water is flowing. Animals look happy. No strange behavior. And that’s what we typically call our morning rounds. And then depending on what day it is. I may or may not feed Methuselah.

We want to keep track of what and how much they’re eating. So I hand feed her twice a week at this point. She’s an omnivorous fish, so I’ll offer her meat items as well as fruits and vegetables.

How do you feed Methuselah?

My typical session starts with me opening up the jump guard and tapping on the surface of the water, just to alert her that I’m here. And then generally within five to 20 seconds, she’ll come on up.

We always try and give as varied a diet as we can. And because most of my fish are carnivorous, I never really worried about what fruits we have in our commissary. But one day I saw a fig, and I was like, let me give this a try. I cut it up and she loved them. I’ve tried all different kinds of fruits, like blackberries, grapes, but she tends to always like figs more. Maybe because it’s not in season all the time and it’s rare for her, it’s more of a treat. While we feed them, we also do training sessions with them. Figs are a motivator.

You can train a fish?

At first, it was just very basic. It was already established that we could hand feed her through the previous biologist that took care of her. So, I just gradually expanded upon that. First, to hopefully keep her at the surface, which was successful. And then performing “tactiles” on her, which is basically where my hands and fingers touch her body, her fins, just all along the scales to get her used to that in the hopes that if we ever have to do any kind of medical procedures, it wouldn’t be a new experience.

Then it got to the point where I was literally able to hold her at the surface of the water, basically manipulating her in any direction that I wanted. Even just giving her nice belly rubs, chin rubs. I don’t know if she liked it or didn’t like it, but she allowed me to do it, which is what I wanted in the first place, and there were no negative reactions beyond that.

It’s all baby steps. There’s a lot of patience involved. But if anybody asks if you can train a fish, absolutely, you can.

I hate to anthropomorphize, but when I work with her, she just seems really, really sweet and you don’t say that about fish. Most fish that we have aren’t approachable like that. I think that alone makes that species pretty unique, that we can work with them so closely. If you look at their faces, they’re kind of cute actually. And for her personally, her personality is really chill, like me, so we get along.

When Groundhog Was on the Menu in Punxsutawney

Fossils unearthed in the Bahariya Oasis tell a story of giant predators hunting on land and in the water.
ancient

Fish fossils may put "the single worst day for multicellular life on Earth" on the calendar.
Video • Object of Intrigue