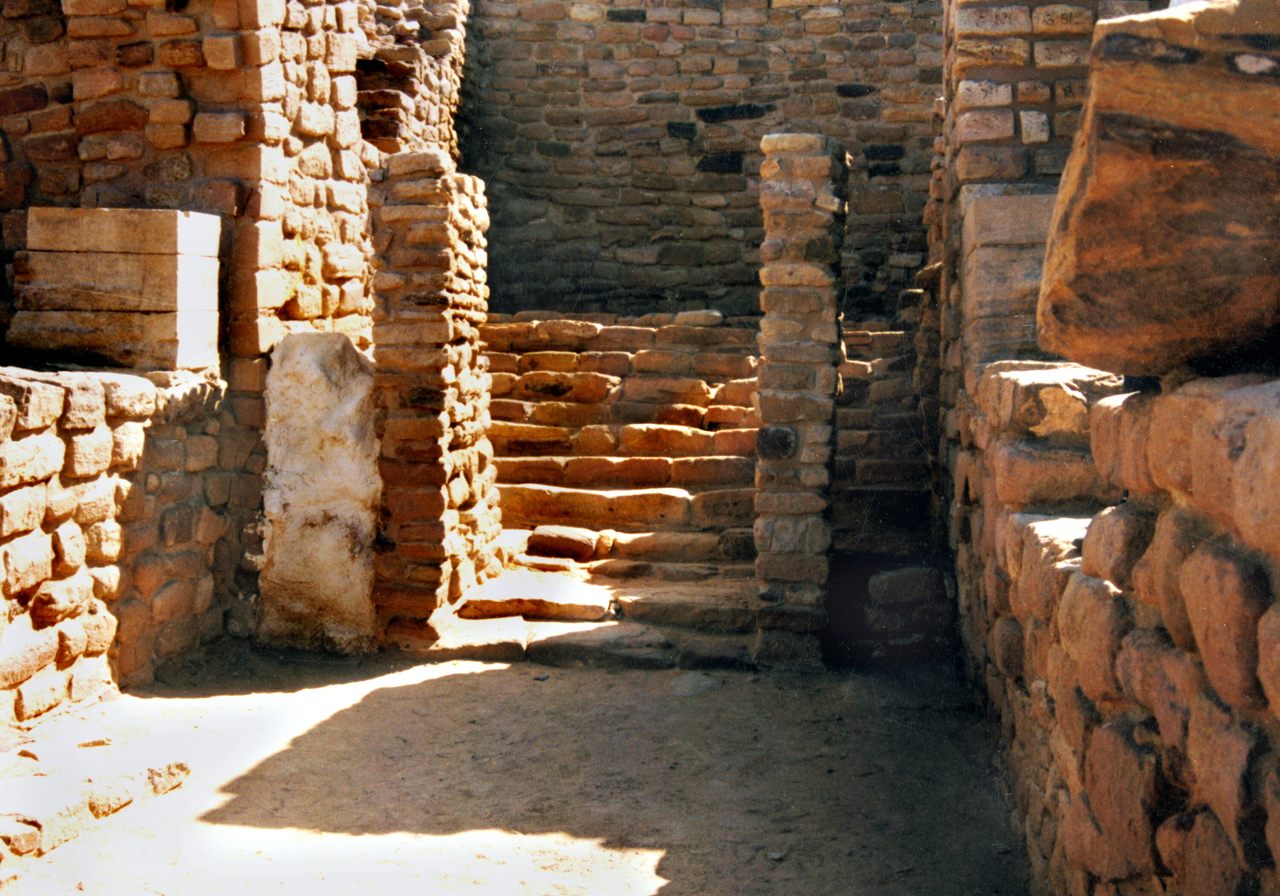 Archaeologists believe that the Dholavira signboard hung above the northern entrance to the city thousands of years ago. Shailesh Raval / The India Today Group via Getty Images

The 5,000-year-old port city of Dholavira can be found on an island in the salt flats of the Great Rann of Kutch on India’s western edge. It has been described as “one of the best preserved urban settlements from the period in Southeast Asia” by UNESCO. Researchers have found step-wells and reservoirs that formed a sophisticated water management system, the remains of ancient streets and boulevards lined by houses of varying sizes, the ruins of a jewelry workshop, and one of the most remarkable discoveries in Indian archeology: what is believed to be the world’s oldest billboard.

The billboard—typically called the Dholavira signboard—was discovered when a team from the Archaeological Survey of India began excavating the southern center of the Indus Valley Civilization in the 1990s. At Dholavira’s northern gate, archaeologists came across two chambers flanking the gate on either side. These chambers looked like storage spaces. And like most storerooms, they were an absolute mess.

The team in the western chamber was gently clearing fallen debris and stones that hadn’t been touched for thousands of years when glints of white became visible. After more careful excavation, they found ten large symbols, each about 15 inches tall and made out of multiple pieces of white gypsum, a material that’s used in drywall today. Archaeologists also found evidence of decomposed wood surrounding the symbols.

These clues led the researchers to conclude that the symbols were part of a billboard. The bright white gypsum would have made the symbols visible from a distance even at night, as torch light reflected off the mineral, while the surrounding wood would have supported the symbols.

R. S. Bisht, who led the team that excavated the site throughout the 1990s and early 2000s, believes that the Dholavira signboard sat atop the largest of the ancient city’s five entrances. Bisht says, “the wooden board was 3.5 meters [11 feet] long and the threshold of the northern gate was also 3.5 meters [11 feet] wide. It seems that it was bolted on the facade of the northern gate and could have been seen from the lower and middle town.”

Researchers wondered why the sign was in a chamber next to the northern gate rather than on it. But Bisht believes that an earthquake, a common occurrence in the area, could have been responsible for dislodging the sign, after which the citizens of Dholavira carefully moved it to a storeroom next to the gate.

Still, one big mystery remains: What did the billboard say? The symbols are remarkably well preserved, perhaps because the billboard was lying face down for thousands of years, the wood of the board protecting the gypsum symbols from the environment. But they are written in the script of the Indus Valley Civilization, which has not yet been deciphered, so no one knows what information was displayed so prominently in the city.

The Dholavira signboard is now in the collection at the National Museum in New Delhi, though it is not on display because of preservation concerns. It remains an object of ongoing research as one of the longest inscriptions in the Indus or Harappan script.

Until the script is deciphered, everything that is known about the people and culture of the Indus Valley Civilization comes from archaeological evidence.

From its earliest beginnings as the neolithic Mehrgarh culture over 9,000 years ago, the Indus Valley Civilization thrived for thousands of years across the lands of modern-day Afghanistan, Pakistan, and India. The people traded with the civilizations of Mesopotamia and China and built settlements with better-planned drainage systems than some modern cities. Yet, around 4,000 years ago, they abandoned their cities and writing and disappeared.

“The Indus Valley people could not get basic needs like fresh water for irrigation and drinking,” says Mahesh Thakkar, professor of geology and head of the Department of Earth and Environmental Science at K.S.K.V. Kachchh University in Bhuj—the closest major city to Dholavira. “Slow climate change over time led them to migrate to the fertile and perennial river basins of the Ganga and Yamuna, leaving their old urban centers abandoned.”

Ancient sites such as Nan Madol, the "Venice of the Pacific," may need to be reconsidered thanks to new evidence about sea level change.
floods

The coastal community of Selsey welcomes the return of salt marshes where farms once stood.
mystery

A scholar of Aegean civilization considers the inscrutable meaning of the artifact—and its irresistible appeal.
ruins

For more than a millennium, Tipasa was a symbol of cross-cultural exchange. Now the sea is coming for it.
Video • AO Docs