The 'Lady Engineer' Who Took the Pain Out of the Train - Atlas Obscura
Want to see fewer ads? Become a Member. 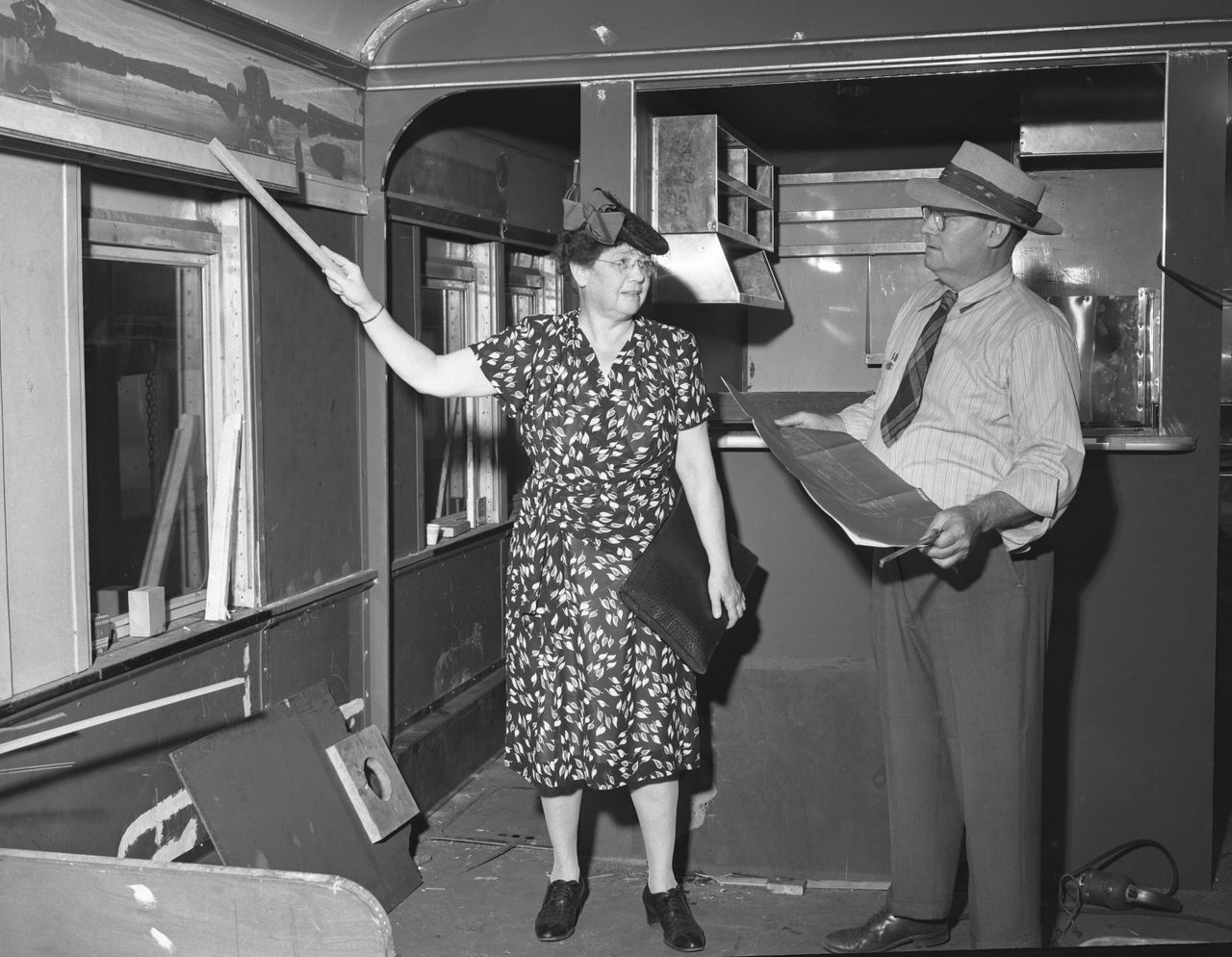 Olive Wetzel Dennis in 1947, making some suggestions on how to improve a new Baltimore and Ohio Railroad buffet car. Courtesy of the B&O Railroad Museum
In This Story
Destination Guide

If you had ridden the Baltimore & Ohio Railroad in the American northeast sometime in the 1920s or ’30s, you might have noticed a passenger who seemed unusually invested in her environment. While you snoozed through Cincinnati, or looked out the window at the approaching Chicago skyline, this woman was probably carefully measuring the height of the seats, or laying cloth swatches over them to check the colors.

As you chose your supper in the dining car, you might have seen her sampling every single item on offer. The next morning, when you blearily left your bunk, she might have greeted you, and asked you how you slept.

This was Olive Wetzel Dennis, the world’s first “Service Engineer.” During an era when few women even set foot on trains, let alone helped design them, Dennis spent most of her time riding the rails for the B&O, thinking of ways to improve the average traveler’s experience. Over her decades-long career, the “Lady Engineer,” as she was called, introduced scores of improvements to the company’s railroads—from footrests and reclining seats to special ventilators she designed herself. As the Baltimore Sun put it years after her death, “she took the pain out of the train.”

Although she entered the field late in life, Dennis was “a born engineer,” says historian Sharon Harwood, who often presents on Dennis’s life at the B&O Railroad Museum in Baltimore. As a child, when relatives gave her dolls to play with, she built houses and furniture for them instead. If she was late coming home from school, it was likely because she’d stopped to talk shop with local construction workers.

In 1896, when Dennis was 10, her father—proud, but also tired of his daughter mucking up his woodworking equipment—gave her a tool set of her own. She quickly got to work building a scaled-down streetcar for her younger brother, “complete with seats that would turn over, steps that moved up and down, and a pivoting pole.”

Dennis went to Baltimore’s Goucher College, and then to Columbia University in New York. She then spent a decade teaching math at a technical high school in Washington, D.C. Throughout, she later told the Sun, “the idea of civil engineering just wouldn’t leave me.” In 1919, she enrolled in a Master’s program in civil engineering at Cornell University. She graduated in the spring of 1920, knocking out the two-year curriculum in half the allotted time, and becoming the second woman to ever receive that degree. As she walked up to the podium on graduation day, a man in the audience apparently yelled out, “What the heck can a woman do in engineering?”

A rude question—but, if you consider the tenor of the times, not an entirely ridiculous one. Railroading in particular “has always been a male industry, bottom to top,” says Harwood. Although women worked as station-keepers, restaurant staff, and clerical staff*—and eventually, during World War I, as metalworkers and pipe-fitters—it was pretty much unheard of for one to lean over a blueprint. So when the Baltimore & Ohio Railroad hired Dennis, as a draftsman in the bridge engineering department, heads turned. One Evening Sun article—headlined “Woman Civil Engineer Enjoys Technical Work”—described Dennis as “one of the few practicing woman civil engineers in the country and, so far as is known, the only one in Baltimore.”

Although Dennis always said her coworkers respected her, the article gives a good idea of the kind of overall environment she faced. “Women are not supposed to have mathematical minds, you know,” the Evening Sun reporter informs Dennis at one point. Later, he describes her as “not of the mannish type,” and informs readers that she is a good singer, can darn a sock, and “isn’t afraid of mice or snakes, but has an abiding horror of bugs.”

This kind of thing did not set Dennis back. (As she herself once put it, “There is no reason that a woman can’t be an engineer simply because no other woman has ever been one.”) Soon after starting her job, she designed her first railroad bridge, in Painesville, Ohio. Within a year, she had gotten herself a meeting with Daniel Willard, the president of the railroad.

For the first time in her life, Dennis found herself in a situation where her gender was seen as a professional asset rather than a liability. As America’s roads filled with cars and buses, the B&O was struggling to retain passengers, and Willard had decided to court a demographic that they had previously overlooked. “I was told to get ideas that would make women want to travel on our line,” Dennis later recalled. Willard was operating under the assumption, she continued, that “if women went on it, men would follow.” He appointed Dennis to a brand new position, which involved coming up with new ideas to smooth out the journey. She was now the B&O’s first “Engineer of Service.”

In order to improve the passenger experience, of course, Dennis had to have a bunch of passenger experiences herself. And so for the next several years, she spent much of her time riding the rails. She’d take a B&O train all the way to the end of the line, get off, and immediately hop on one going back the other direction. She also traveled exhaustively on rival trains, including the Pennsylvania Railroad and New York Central.

All told, over the course of her career, Dennis traveled somewhere between a quarter and half a million miles, identifying and solving problems all along the way. Dressing rooms too cramped? She expanded them, and added paper towels, liquid soap, and disposable cups. Window seats too drafty? She invented a ventilator that stabilized temperatures, and kept cinders out without blocking the scenery. “Once she took a trip to Chicago just to sleep both ways,” the Baltimore Sun reported, testing one mattress brand on the way there and one on the way back. Thanks to her, in 1931, the B&O introduced the world’s first completely air-conditioned train.

“Miss Olive Dennis … probably is the world’s greatest housekeeper,” began another reductive article in the St. Louis Star and Times. In reality, though, the job was equal parts social research and design engineering. Although she was initially told to focus on female travelers, she soon found all passengers wanted improvements. When businessmen told her they had planned to prepare for important meetings, but kept falling asleep after eating in the dining car, she added salads and soups to the dinner menu. After long nights in coach—awake this time—she prescribed (and helped design) reclining seats, dimmable ceiling lights, and all-night onboard lunch counters that served sandwiches and coffee.

“No details were insignificant in her view,” says Harwood. When the onboard china lost its luster, she designed a whole new set, with scenic locations depicted in the plates’ centers, and historic trains chugging along the outside. Other improvements she made include simplified timetables, easy-to-clean upholstery, onboard nurses, dining car configurations that eliminated the need for high chairs for children, and shorter seats, so all women could comfortably rest their feet on the floor.

Dennis preferred certain of these jobs to others: “She would rather puzzle over the arrangement of doors and cabinets to avoid blocked passages or detect flaws in the construction of a Pullman berth than compose a color scheme for a new club car,” the New York Times reported. But she pulled off both. (In her spare time, she leaned into her left brain, entering—and often winning—puzzle contests under the nom de plume “N. Jineer.”) Eventually, the B&O put her in charge of designing an entire train, the Cincinnatian, which incorporated all of her improvements, and and which Harwood calls “the crowning glory of her career.”

Dennis retired in 1951, at age 65. She died six years later at her home in Baltimore. Throughout her time with B&O, she spoke to women’s groups about her life and career, encouraging them to pursue their interests to the highest possible level. “There is not a doubt that other women were inspired by her passion for civil engineering,” says Harwood. “She was an excellent role model for aspiring and achieving.”

Her direct legacy, though, remains largely invisible. Dennis signed over most of her patents to the railroad. Her name does not appear in publicity materials for the Cincinnatian, the train she designed. She also went unmentioned in the advertisements the company took out touting the many new comforts she originated. And as Harwood puts it in her talk, most people outside of the railroading community don’t know who she is.

So next time you climb onto a train, settle into your seat, and find yourself giving sigh of relief, spare a thought for Olive Dennis. And if you groan in pain instead, feel free to think of her anyway—she probably would have fixed it.

*Correction: We originally referred to women being employed as railroad “clerics.” While train travel can be a holy experience, this was not what we meant.

The Historic Pub That Holds Its Own Olympics

These convenient, compact meals have a devoted fanbase.
science

Woods was prolific, but was largely forgotten for many years after his death.
sailors

The Adventurous Seafaring Women of the Age of Sail, in Their Own Words

Answering the call of the sea.
railroads

It's all thanks to Big Boy No. 4014, the world's largest steam locomotive.
Video • Wonder From Home